Dr. Stone: Rebuilding a Civilization from Zero with Senku 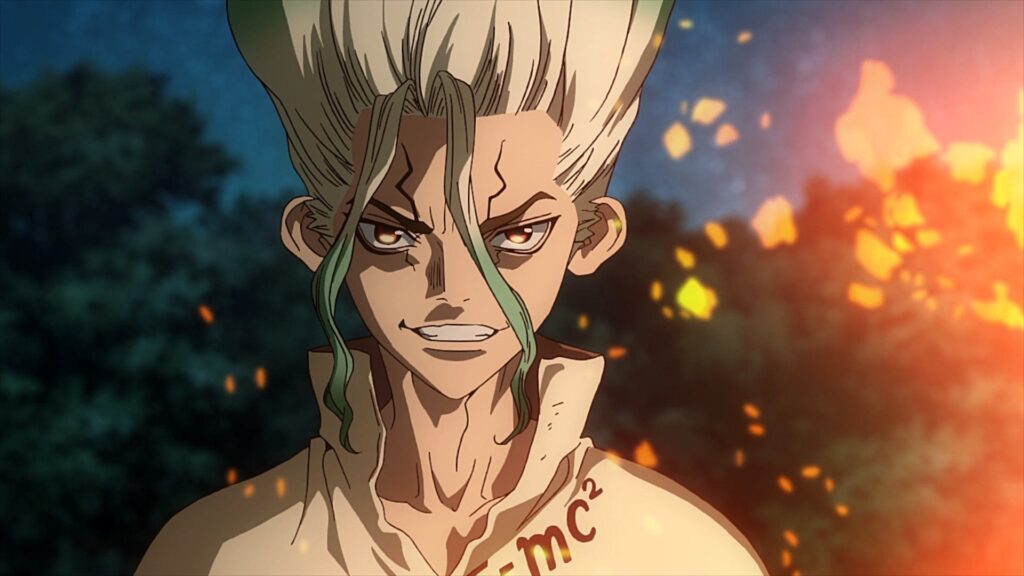 What would you do if the world has a petrified world? And How far can we survive in a world with no science or civilization? Well, let me introduce you to an anime that teaches you how to rebuild the world from zero with many surprises, mind-blowing scientific knowledge, and the fight that sparkes between two different yet both bright goals to the new world.

Senku and Taiju is a regular high school student, one-day Taiju was about to confess his great love to a girl named Yuzuriha, mystic green flash coved the whole world, all human has been turned to stone yet only human, no other animals on earth was effected. Somehow they are all conscious inside the stone.

4000 years pass without human civilizations meaning nature started to take over the world. Took and destroyed everything that human history has created, protected, and developed. Now the earth is back to the stone age, wild animals who escaped from home nad zoo, wildness covering nondegradable concrete buildings.

Senku and Taiju were the first to wake up from being statues, They try to live as civilized as possible as getting a fire started, having a roof over the head, and a safe place to collect keys of resolve and testing how did all human turn to stone.
As soon as Senku had found the right chemical to bring back statue to human, Taiju was on the way to wake Yuzuriha from a long sleep, they were chased by lions who escaped from the zoo,  they had no choice but to use the chemical on Tsukasa; The Strongest Primate High Schooler to defeat the situation.

Tukasa and Senku had very different ideas of the new world.

Senku wants to restore everything, revive every single people on earth with his crazy knowledge of science. Yet Tsukasa wants to create the new world without dirty politicians and evil adults who want to claim and possess and corrupts young people’s freedom.
They stand on the opposite side to creating the new world, Tsukasa seeks to defeat Senku in order to proceeds with his goal and Senku stands against with technologies and science weapons.

Just to let you know after watching this anime, you will feel like a mini mad scientist with dangerous yet thrilling survival techniques. The excitement and crafty-ness will catch your attention.

Dr. Stone is new and different in many ways

Manga Dr. Stone was written by Riichiro Inagaki and illustrated by Boichi (who worked and created many illustrations for different Mangas) released on March 6th, 2017. The original manga has been nominated and received multiple awards in Japan.

Dr. Stone was one of the stories that he brought to his editor, and he picked Dr. Stone because he couldn’t imagine how the story will develop, He wanted to create new entertainment in the manga world. Survival or action anime was created by many amazing creators, that’s why he wanted to create a manga that is very crafty because there is not much manga that fits into the category.

Yet he struggles at the beginning because in order to rebuild the civilization from wildness must include some surviving storylines, so he decided to start his 1st and 2nd manga in a technical way. So the true first episode starts when Senku waking up after 4000 years of being a statue. Riichi Inagaki was very strict about sending the right message; Dr. Stone manga is a scientific and crafty manga, that’s why the beginning of the story timeline seems to be very different yet intriguing.

Riichi Inagaki succeeds to present the new category of science and craft combination in the best and exciting form. Dr. Stone is available on Shonen Jump weekly or currently, there are 15 manga is out.

Dr. Stone started from July 5th to December 13th, 2019. A total of 24 episodes was aired on Tokyo MX and other channels in Japan. All episodes are available on Crunchyroll, Funimation, and Netflix.

Watching all 24 episodes of  Dr. Stone anime is like 5 minutes trip to another world and spent 5 years there. It is so fast yet so rich that the time frame gets jacked and shifted, that’s how exciting it is.
Pay very close attention to the tempo of how the story carries the characters, it is like listening to beautiful music, very highly orchestrated, and have something to pull everyone’s attention.

The characters of Dr. Stone will become your lab buddies

Which Dr. Stone characters would you like to sit at the lab table with? Because everyone brings out so many emotions and relatable feelings to you. Here are some main characters from Dr. Stone.

Senku is a true science-otaku, highly intelligent mad scientist high schooler, especially his knowledge in astronomy and space exploration is outstanding. He seems to be arrogant and sadist in a way, yet inside, his very noble and considers other people more than any expectations. His math skill is on another level too, he was the one who knew how many years has passed since turned to stone because he was simply counting, counting for 4000 years without letting the emptiness take his continuous away. He believes that everyone has a role to create the new world, no one should be left behind for any reason.
His dream was to go to space since he was very young, he experiments everything in order to get to space. He helps his father to become an astronaut, with our Senku’s help Byakuya had no chance to be an astronaut.

Senku’s best friend, known as “big oaf” or “musclehead”. He has high physical strength and stamina, Senku and Taiju are filling each other’s hands in need and trust are very strong. Even Taiju is the one with strength and a strong body figure, he never hurt anyone with his power and not good at fights at all. He is very passionate and simple, strongly believes in Senku with no question. Taiju is in love with Yuzuriha for a long time and he protects and stands right next to her in the new world.

Yuzuriha Ogawa
Yuzuriha is a sweet and cheerful girl whos very kind, she was a member of the handicraft’s club in high school before the world turned to stone. Her dream was to become a fashion designer, she provided clothes for Taiju and Senku at the beginning.  She takes steps to the new world besides Taiju help people around her.

Tsukasa Shishio
Tsukasa is known as the strongest prime high schooler, he can kill a grown lion with one punch. He has a very strong belief in his justice system, he wants to recreate this new world with better people. It is against Senku’s belief yet no one can say that Tsukasa’s idea is wrong because he wants to want to create a new world with equality and fairness.

Be ready to press the “next episode” button faster than ever

Hope this article prepared gave you the urge to watch Dr. Stone anime on your time. Dr. Stone is highly recommended and one of the most-watched anime in 2019-2010. Enjoy every small step to restoring the world with Senku and his friends, it is a new type of amusement in the anime world that brings new excitement.