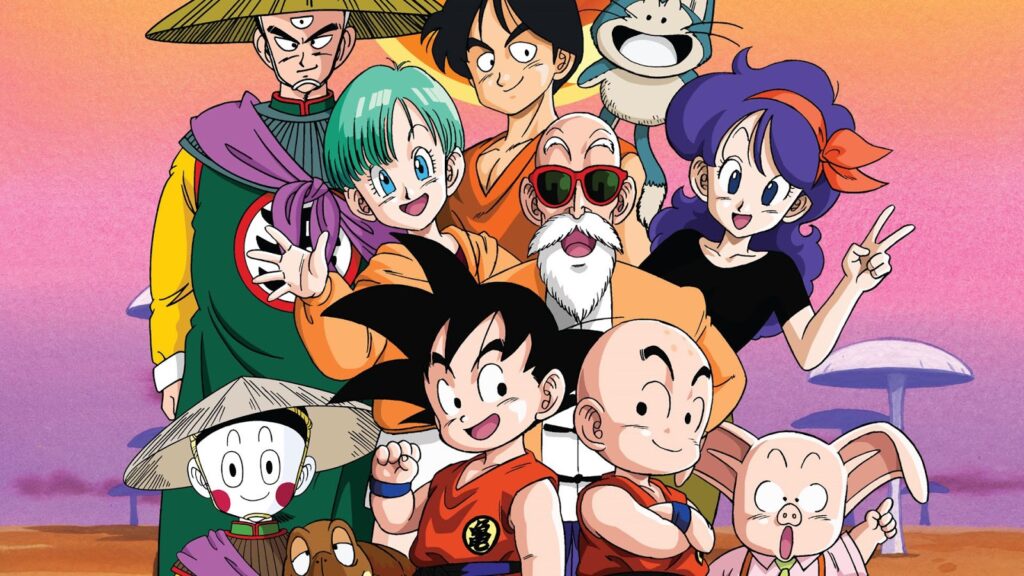 In the history of manga and anime, few franchises have had the impact of Dragon Ball.

It’s not all that hard to see why.  Take a classic Chinese story, Journey to the West. Update it for a modern audience.  Add in martial arts action and some comedy.

In the Dragon Ball universe, the villain of a previous arc can be the hero of the next one.  And of course, stronger villains require stronger heroes, so characters continue to train and grow more powerful.

Throughout it all, there is a core group of friends and allies that the audience has gotten to know over the years.  Some are goofy and others are grumpy (we’re looking at you, Vegeta). But they’re all pretty much likable.

It’s no wonder that Dragon Ball and its sequels have lasted for hundreds of episodes.  It’s been more than 30 years since the first manga and anime came out.

The original Dragon Ball manga was created by Akira Toriyama. It lasted from 1984 to 1995, and for years the series was one of the stars of the manga magazine, Weekly Shonen Jump.

Add it all up, and you get 798 episodes.  That’s not counting Super Dragon Ball Heroes, which exists in its own trading card video game-influenced continuity.

Any show which has lasted as long as Dragon Ball has can be hard to keep straight.  So let’s look at the history.

Early Dragon Ball episodes have a lot of Journey to the West flavor to them.

Goku has the same name as the Monkey King, Son Goku. In Chinese, Son Goku is Sun Wukong, but the meaning is the same.

In Journey to the West, the Monkey King helps a monk find some Buddhist texts.  In Dragon Ball, Goku is helping Bulma find the Dragon Balls.  Goku’s staff, or Power Pole, is based on the staff used by Sun Wukong.

His Flying Nimbus cloud, or Kinto’un, also has a Monkey King counterpart.  As a young boy, he even has a monkey tail.

There is also the Ox King, or Ox-Demon-King in the original tale, and his daughter Chi-Chi. Chi-Chi is most likely based on Tie Shan Gongzhu, or Princess Iron Fan, although she is the Ox-Demon-King’s wife, not his daughter. 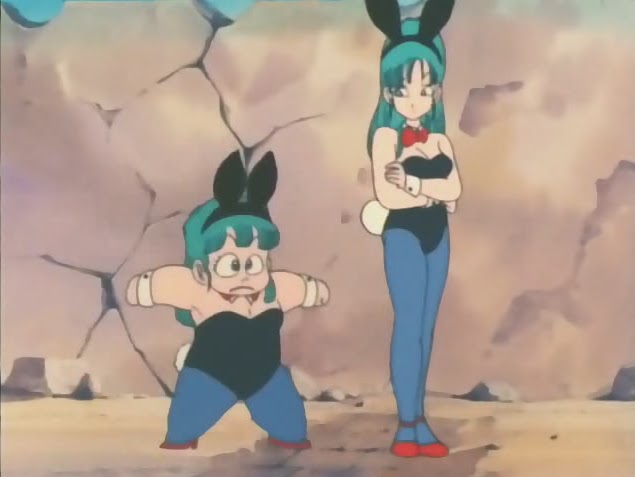 The story then jumps ahead three years to the next martial arts tournament.  The new Piccolo wants revenge. When people talk about “Piccolo,” this is the one that they are usually thinking of and not King Piccolo.

At the end of Dragon Ball, things were starting to get serious. We see more tournaments and the introduction of alien characters. 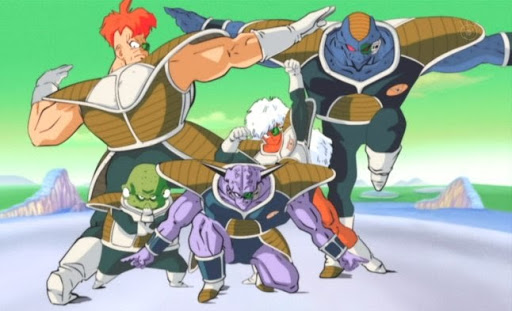 The story gets even more intense in Dragon Ball Z.  We learn about the Saiyans.  We learn that Goku is a Saiyan.

We also discover that Goku’s origin story is more similar to Superman than the Monkey King — a powerful alien from another world, raised by humans and loyal to Earth.

There’s still room for silliness, such as the over-the-top Ginyu Force. 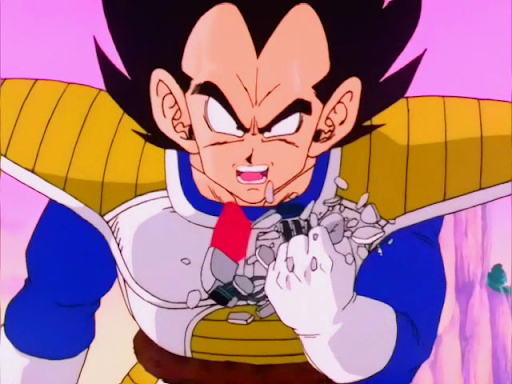 You know the lines.  They’re from the Vegeta Saga of Dragon Ball Z, before the heroes go off to Namek.

If you’ve only ever seen one piece of Dragon Ball Z, you’ve probably seen this one.  In the episode, the Saiyans Nappa and Vegeta have come to Earth.  They are searching for Dragon Balls.

They fight a whole bunch of people, including Tien, Piccolo, Krillin, and Gohan.  Goku isn’t there, but eventually, he shows up in the episode “The Return of Goku.”

They get into a fight with Goku.  Goku seems unusually strong, so they check him with the scouter.  And that’s when the fun starts.

Incidentally, the meme-worthy version of that famous line only appears in the Ocean dub. Brian Drummond voiced Vegeta at the time.

Christopher Sabat, the current voice of Vegeta, didn’t say it.

Goku is turned into a child. A new villain must be defeated.

The Dragon Balls themselves are now a problem, as dragons are sent to punish people for misusing the balls.

If we use the traditional definition of filler, Dragon Ball GT is all filler.  None of it happened in the manga.  People have questioned Dragon Ball GT’s status as canon, especially after the creation of Dragon Ball Super.

Dragon Ball Z Kai is something unique in the world of anime.   It’s not a sequel.  It’s not exactly a remake, either.

It’s more like restoring a classic old car with a new paint job and engine repairs.  Some scenes were re-animated. They also re-recorded the voice track. Some filler was left out. Some stuff from the manga which had been left out of Dragon Ball Z was added back in.

Dragon Ball Super takes place after the defeat of Majin Buu. There was a time skip there, and this story fills the gap.  There’s a new villain and another tournament.  Future Trunks plays a role in this one.

The plot of Dragon Ball Super was written by Akira Toriyama, and a manga was created for it. Theoretically, that makes it more canon than Dragon Ball GT.

Several Dragon Ball films have been made.  The most recent of these was Dragon Ball Super: Broly in 2018.  This is the first “Super” film in Dragon Ball.

We get some history of the Saiyans.  Goku and Vegeta, Dragon Ball’s two main Saiyan rivals, meet a dangerous Saiyan named Broly.

It takes a fusion of Goku and Vegeta to defeat Broly.

Dragonball: Evolution was an American-made, live-action Dragon Ball movie.  It came out in 2009.  The film featured Justin Chatwin as Goku, Chow Yun-fat as Master Roshi, Emmy Rossum as Bulma, Jamie Chung as Chi-Chi, James Marsters as Lord Piccolo and Joon Park as Yamcha.

The film did not get good reviews, with a 15 percent on the Tomatometer. Fans complained about the extremely loose adaptation of the source material. Reviewers called it “a terrible mess” and “my least-favorite film of all time.”

Despite the failure of Dragonball: Evolution, the idea of live-action remains intriguing.  It has been reported that Disney may soon have a live-action Dragon Ball Z TV show.

There have been many video games based on Dragon Ball.

Dragon Ball Xenoverse is a role-playing game for PlayStation 3, PlayStation 4, Xbox 360, Xbox One, and Windows.  It was released in 2015.

Fighters travel to various different battle scenes from the anime. Players can create a customized character, and have them learn special moves from Dragon Ball characters.  Players can be Earthlings, Saiyans, Namekians, Majins, and Frieza’s race.

Dragon Ball Fighterz came out in 2018.  It is available on PlayStation 4, Xbox One, and Windows.

It is a fighting game.  Players can select a team of characters from the anime. You control one character, while the others provide assistance.  The game starts out with 21 playable characters, and more are unlockable or downloadable.

After the update was introduced, a net animation series, Super Dragon Ball Heroes, was released in 2018.

Dragon Ball Z: Seasons 1-9 Collection is an Amazon Exclusive Blu-ray collectible. You get 36 discs for $239.63.