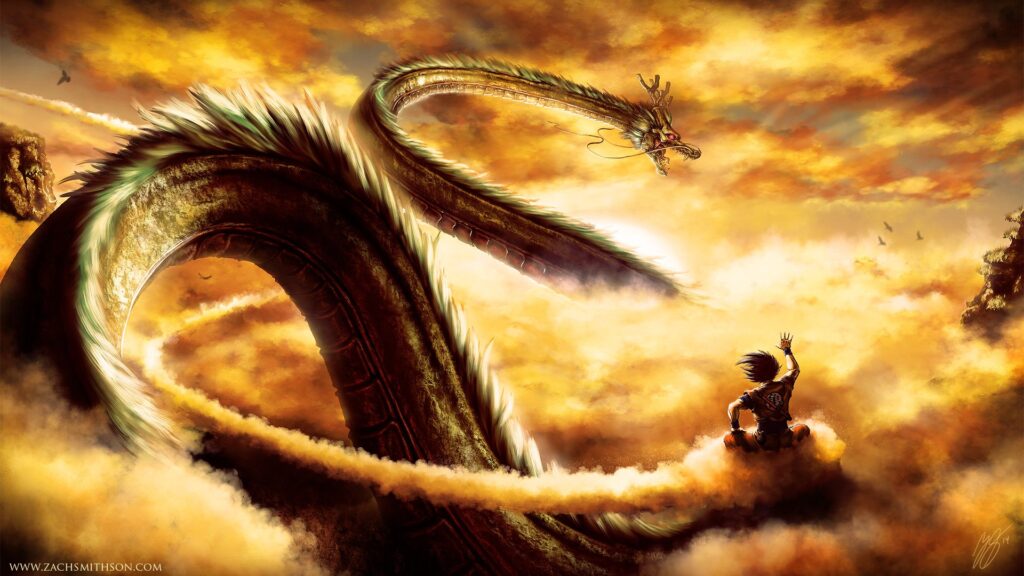 With the original Dragon Ball Z anime airing from 1989 to 1996 and a fresh remaster called Dragon Ball Z Kai airing from 2009 to 2011 and 2014 to 2015, the idea of checking in with one of the most iconic anime series of all time is definitely worth it. It’s a sign the new generations are still connecting with the story, and when it comes to the story, there sure is a lot of it.

So let’s take a quick look back at Dragon Ball Z’s beginnings, some of the characters and story arcs that make DBZ the iconic series it is. 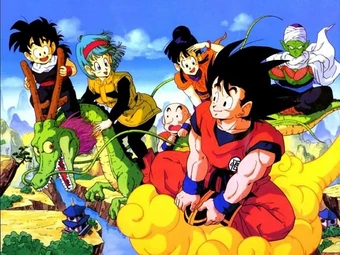 Aside from remastering the original series for image and sound concerns, new and old fans of the franchise alike are sure to notice and appreciate a couple of differences between the original broadcast of Dragon Ball Z and Dragon Ball Z Kai.

One thing to keep in mind is that, when the original anime was being aired, the manga was still coming out. The original series ran in Japan from April 1989 until January 1996. Meanwhile, the manga was being published from 1984 to 1995. That’s a pretty significant overlap.

As such, it was important for the publishers and TV studio to schedule the releases of both versions of the series so that the show wouldn’t spoil any surprises for the manga. One way to do this was to pad the episodes and stretch out story arcs, lengthening existing scenes, and often adding extra ones.

Aside from updating the footage for HDTV, as well as re-recording audio to update the quality, Dragon Ball Z Kai edited out a number of scenes that had been created for the anime only. The overall effect of this is to alter the pacing of the series.

A couple decades after the manga’s publication run has wrapped up, there’s no more need to bog down the story narrative of the anime. The remastered version of the series, as a result, has a pace that moves faster, is more exciting, and is a lot closer to what was intended in the original manga.

The fact that Dragon Ball Z Kai was able to take something beloved by so many and tighten and elevate it for a new generation is pretty wonderful, especially considering the motivation for the redux. As with most things, said motivation had to do with money.

In 2009 Bandai was looking to make more money off the Dragon Ball Z property, so they approached series creator Akira Toriyama. At that point in time, Dragon Ball GT had already run its course, airing from 1996 to 1997, and Dragon Ball Super was still yet to come.

Toriyama wouldn’t create a new storyline for Bandai, but after reflecting on pacing issues he had with the original anime adaptation, an opportunity presented itself.

The first run of Dragon Ball Z Kai consisted of 98 episodes. Those 98 episodes covered the Saiyan Saga, the Frieza Saga, the Androids Saga, and the Cell Saga. The amount of story the original anime told in 194 episodes, the new version fit in 98 episodes.

The second run of Dragon Ball Z Kai, which aired in Japan from April 2014 to June 2015. Consisting of 69 episodes, this run covered the World Tournament Saga, the Majin Buu Saga, and the Evil Buu Saga. The Kai version of the anime achieved in 69 episodes what the original series run took 97 episodes to do.

Classical Origins of a Classic 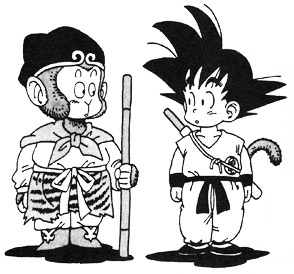 Initially inspired by the classic Chinese novel Journey to the West, Akira Toriyama created the iconic manga Dragon Ball in 1984 to be serialized in Weekly Shonen Jump, where it would appear until 1995. The eventual 519 chapters of the series would soon be published in 42 volumes. However, the series would start receiving an anime adaptation treatment starting in 1986.

Even for a saga that ultimately consisted of 291 episodes spread over nine seasons, Dragon Ball Z has a lot of characters. Here’s a glance at just some of the major players. 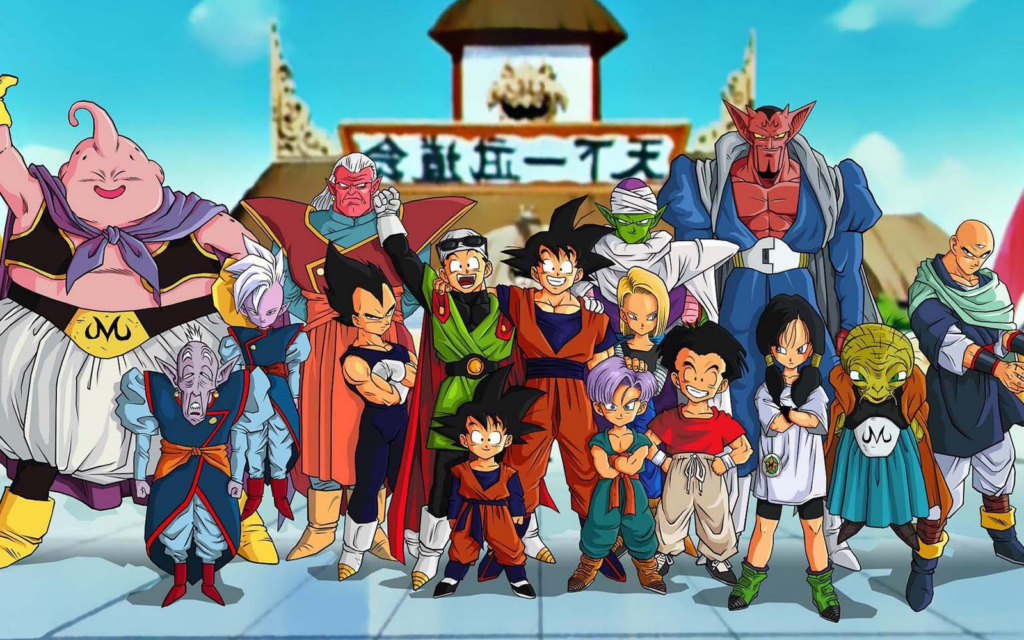 The central protagonist of the whole shebang, Goku starts off at the beginning of Dragon Ball as a kid. While Dragon Ball Z focuses on his experience as an adult, the core of his character remains basically the same throughout.

Goku is super strong, due in part to the fact he is a species of alien called a Saiyan (on his planet he’s called Kakarot). He’s also super competitive, and also super kind. Though not from Earth, Goku is devoted to protecting the planet he’s adopted as home, even if that is from members of his own family and conquerors from his home planet.

At the start of Dragon Ball Z Goku is married to Chi-Chi and has a son named Gohan, later to be joined by a second son named Goten.

First meeting Goku when he was a kid, and she was just a teenager, Bulma is a brilliant inventor. Inventing everything from time machines to technology to shrink oneself, she’s helped Goku and crew with their tech needs on multiple occasions. Eventually, she enters a relationship with Vegeta, a would-be conqueror from Goku’s home planet, having a son named Trunks.

Starting off as a bit of a rival to Goku while they’re both studying martial arts under their teacher, Master Roshi, Krillin goes on to be one of Goku’s best friends. Just like Goku and a number of other characters, Krillin ends up sacrificing his life to save his friends, and the world, on a couple of occasions, getting brought back to life, typically through wishes made using the titular Dragon Balls.

Eventually, Krillin will marry Android 18, having a daughter named Marron.

A member of the Namekian people who created the Dragon Balls, Piccolo starts off as an enemy of Goku’s. He comes on the scene seeking revenge, but after losing to him, they quickly join forces to fight off invading Saiyans.

Doing the same sort of death and revival schtick as the other heroes, Piccolo eventually accepts his role as an ally to Goku and team, fighting off various threats to Earth.

The son of Goku and Chi-Chi, Son Gohan, looks a lot like young Goku did in his Dragon Ball days. After a failed kidnapping attempt from Goku’s evil brother Raditz, Gohan goes on to get trained by Piccolo, eventually becoming one of the strongest fighters in the series. Later on, he meets and starts a relationship with Videl, the daughter of Mr. Satan (called Hercule in some English versions). Together, he and Videl have a daughter named Pan.

The last prince of the Saiyans, the people from the planet that Goku is originally from. A conqueror of planets, Vegeta comes to earth searching for the Dragon Balls, coming into conflict with Goku.

Eventually teaming up with Goku and friends to defeat Frieza, they become allies, while still maintaining a competitive rivalry. After battlingFrieza, Vegeta begins a relationship with Bulma and together they have a son named Trunks and a daughter, Bulla.

The child of Vegeta and Bulma, Trunks first arrives as a young man time-traveling from the future. Coming to the past in order to warn everyone about the impending arrival of the Androids who, in his timeline, kill everyone. In the present, Bulma gives birth to him, just around the time the Androids arrive.

After the defeat of the Androids, Trunks goes back to the future, leaving the baby version of himself to age normally, becoming best friends with Goten, Goku and Chi-chi’s second child. Trunks is a gifted fighter, able to go Super-Saiyan by age seven, and mastering the Fusion Technique with Goten (which they use to fight Majin-Buu) to become Gotenks.

Android 18 first arrives on the scene intent on killing Goku. Formerly a human woman, the evil Doctor Geo(former chief scientist for the Red Ribbon Army) turned her into a cyborg.

In future-Trunks’ timeline, Android 18, along with Androids 17 and 16, end up killing everyone. In the central storyline, the main characters keep that from happening. As does the arrival of Dr. Geo’s ultimate creation, Cell.

At one point, Cell absorbs her and Android 17, but Gohan ends up hitting Cell so hard, he ends up expelling Android 18. Later on, she and Krillin end up starting a family together, having a daughter named Maron.

Before training with his older brother, Gohan, Goten had already been receiving training from his mom, Chi-Chi. The youngest child of Goku, Goten is a gifted fighter, and can go Super-Saiyan even as a child.

Goku and Piccolo teach Goten and Trunks the Fusion Technique in the hopes that their combined form, Gotenks, would be able to defeat the evil Majin-Buu. Despite being absorbed by Majin-Buu, Goku and Vegeta are able to save them, only for Trunks and Goten to die along with the rest of the world when Buu destroys the Earth.

When the world is brought back using the Dragon Balls, Goten and Trunks are also revived, so don’t fret. 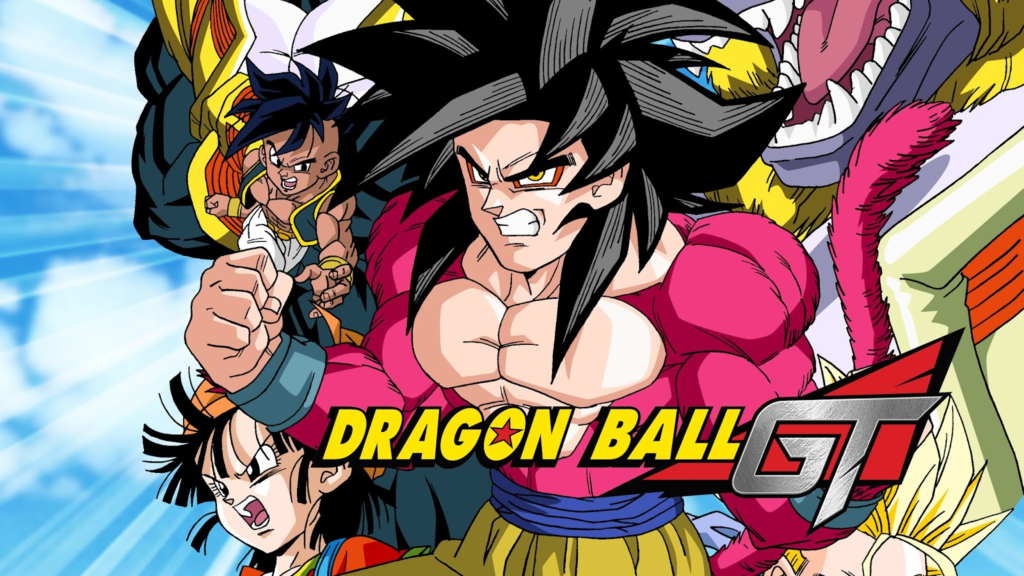 Dragon Ball GT aired from 1996 to 1997 and consisted of 64 episodes. This series picks things up about five years (10 in the English dub) after the events of Dragon Ball Z. Initially following Trunks, Pan, and Goku, who had been turned into a child again, as they hunt for Black Star Dragon Balls, the series goes on to have the Dragon Ball gang fight against enemies old and new.

The series concludes with the descendants of our hero’s competing in the 64th Tenkaichi Budōkai martial arts tournament. 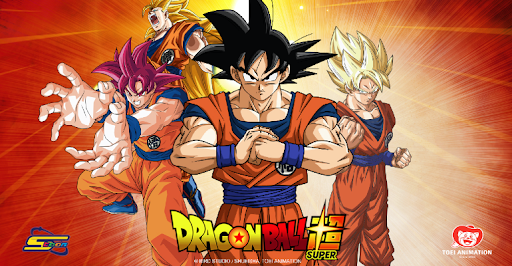 Dragon Ball Super ran from 2015 to 2018. With 131 episodes, it picks up chronologically, right after Dragon Ball Z and before the events of Dragon Ball GT, while Chi-chi is still pregnant with Pan. After having a prophetic vision of a Super Saiyan God, the cat-like Beerus, a god of destruction, shows up to fight him.

This Super Saiyan God is, of course, Goku. Despite losing their fight, Beerus doesn’t destroy the earth, instead, he trained Goku. Dragon Ball Super follows along as Goku learns how to deal with his new god-level powers, facing stronger enemies in other universes, as well as old enemies returning, more time travel, and as ever wishes bringing people back from the dead. 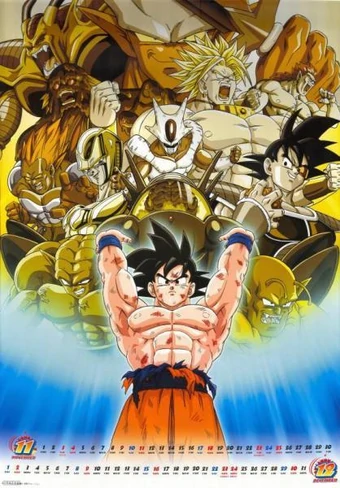 Though there are three Dragon Ball Movies that were released between 1986 and 1988, a fourth was released in 1996; when it comes to Dragon Ball Z movies, there have been a total of 15 movies, not including the awful live-action American Dragon Ball Evolution(2009).

While not all of them have been released outside of Japan, the Dragon Ball franchise has had a number of video game adaptations across all kinds of consoles as well as mobile and arcade games. All in all, there have been over 60 different Dragon Ball video games.

The first-ever video game was released for a console called Famicom, a Japanese precursor to the NES, back in 1986. While the first video game to be released in the United States was 1997’s Dragon Ball GT: Final Bout for the Playstation. More recent games include the 2015 mobile game, Dragon Ball Z Dokkan Battle, the 2017 web browser game, Dragon Ball Devolution.