Dressing for Success in Onechanbara 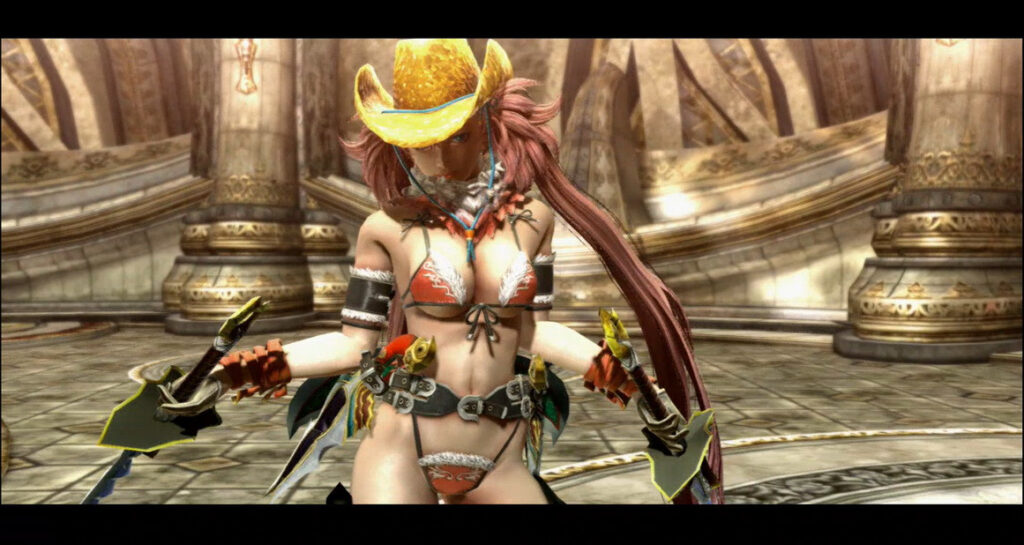 How D3 Publishing Went from Billiards to Bikini Zombie Slayers

Between 1999 and 2000, Japanese game publisher D3 Publishing began producing a series of simple games that were essentially card game simulators for the Sony Playstation.

Classic games like mahjong, solitaire, shogi, and chess were all marketed as affordable and generic simulators under the 1500 or 2000 series, to specify that they were being sold for 1500 or 2000 yen.

The games in this series were also denoted by their titles being things like The Shogi or The Solitaire, with the ‘The’ spelled in English on the box. These simple games were thus referred to as the Simple Series.

If you’ve looked at the cover photo for this article and read that paragraph and noticed a sharp disconnect, we’re getting to that. As D3 began to run out of basic games they began using other developers to produce more experimental niche games, such as Earth Defense Force.

Earth Defense Force is somewhat of a cult-classic, putting players in the role of one of the members of the titular EDF as they defend the planet from alien invasions. Another was Demolition Girl, where the goal was to alternately take the measurements of and pacify a giant woman in a bikini. Eventually, this led to Onechanbara.

As a result, Onechanbara is a series of games where women in various states of dress and undress fight off legions of the undead, usually with swords. 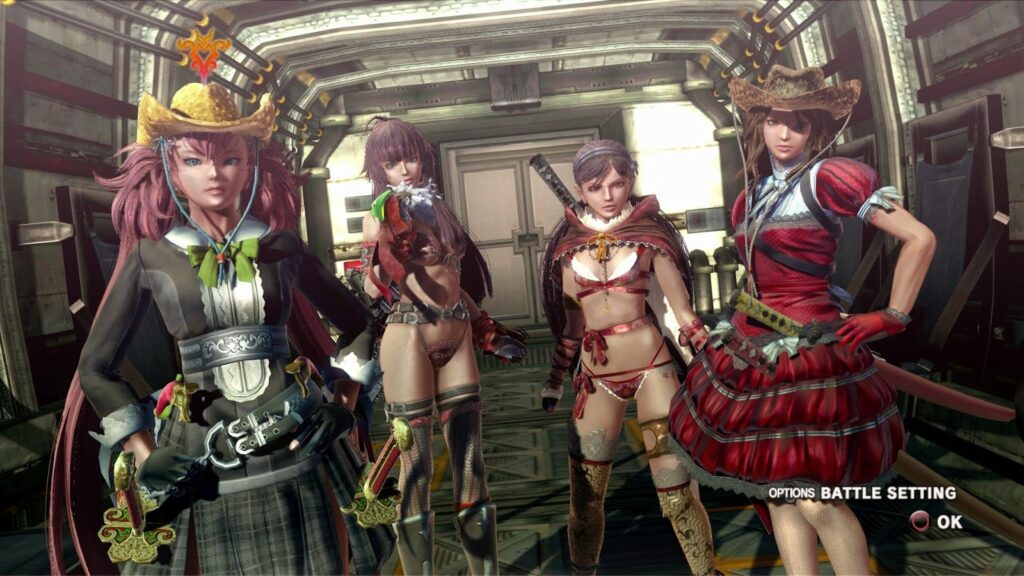 Onechanbara Is a Hack-and-Slash with Style

The first couple of games released in the series, for North America, at least, were Onechanbara: Bikini Samurai Squad, and Onechanbara: Bikini Zombie Slayers. There were four games released in Japan and Europe prior to this, known as Zombie Zone, then Zombie Hunters and Zombie Hunters 2 in Europe, and various iterations of The Simple Series in Japan.

These four were basically Onechanbara 1 and 2, with upgrades to both eventually released. By the time it hit North America it was known as Onechanbara: Bikini Samurai Squad, and was largely a sequel to the two games not released in the continent. For this reason, the game opens with a lengthy explanation of the events that occurred before BSS.

As far as Bikini Samurai Squad is concerned, lead characters Aya and Saki are stepsisters that share a cursed bloodline, known as Baneful. This gives them superhuman abilities but also subjects them to bouts of mania brought on by bloodlust.

Aya is distinguished by being the reason for the Bikini subtitle, as she wears a bikini along with a cowboy hat and boots, and often a large feather boa. Saki is more toned-down than Aya in more ways than one; she usually wears either some sort of modified schoolgirl uniform or dresses similar to the Japanese ‘lolita’ style.

Where Aya is loud and cocky, Saki is much more reserved.

Before the events of the Samurai Squad, the two sisters fought each other, as Saki was responsible for an uprising of the undead. But by Samurai Squad they’re partners, looking to put down the mysterious Third Zombie Uprising. Bikini Zombie Slayers is largely a continuation of this narrative, where even though the initial instigators of the uprising are dealt with their influence remains.

Gameplay in BSS and BZS consists of hacking and slashing enemies in order to build up combos for extra points. Players control either Aya or Saki and can switch between one or the other during gameplay.

There’s a maintenance mechanic in the game where every so often the player must clean the accumulated blood of the undead off of their sword in order to prevent it from slowing down or losing power. Players must also take care to not let either character’s Rampage Meter get too high, otherwise, they’ll shift into Rampage mode as a result of their Baneful blood.

In this mode, the characters deal much more damage, but will also take much more damage. Players can also unlock accessories and outfits for either of the girls in order to customize their look, as well as see if it’s possible for Aya to show more skin than she does (It is). 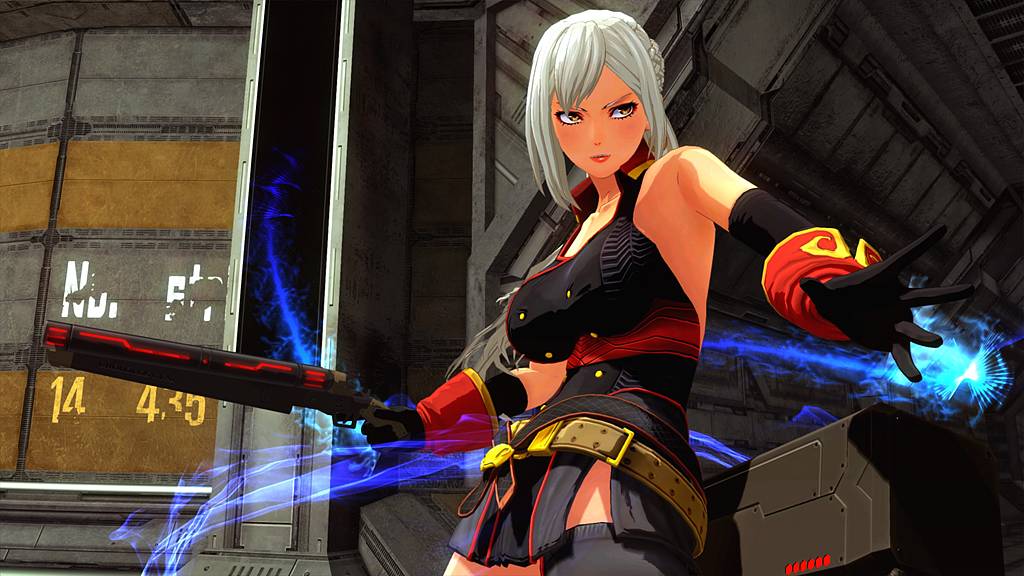 The next main installment of Onechanbara, Onechanbara Z: Kagura, was not released in North America, but it introduced essentially Vampiric versions of Aya and Saki.

The two leads are Kagura and Saaya, Vampiric half-sisters similar to Aya and Saki. Like Aya, Kagura wears a somehow more revealing bikini along with a feather boa and cowboy hat. The in-game flavor text seems to imply that her wearing of this outfit is intended to taunt Aya, who is described as wearing her own bikini-and-cowboy-hat ensemble in order to somewhat flaunt her body.

As Aya is more taunting and teasing than her half-sister, Kagura is generally cocky towards everyone, especially Aya. And as Saki is more reserved and somewhat haughty than her half-sister, Saaya is generally more calm and level-headed than Kagura. Their role in Z: Kagura was largely to take out the other members of their Vampiric clan that wanted to control the world, as well as their mother, the vampire queen Carmilla.

They were assisted in this by Aya and Saki, and it is immediately after this that Onechanbara Z2: Chaos takes place.

In Onechanbara Z2: Chaos, both groups team up to fight another global undead uprising, organized by a former underling of Carmilla. The game is notable for an overhaul in combat mechanics that critics did note as being addictive if not occasionally unsatisfying.

Players can cue up a massive combo attack as one character, then switch to another in order to mop up any survivors, and chain combos off of each of them. In addition to the Frenzy mode players will also be able to transform Aya and Saki into special Dare Drive forms, which give them more power but with fewer drawbacks.

Just as in previous titles players can also customize each character by unlocking accessories and outfits, and have more options for doing so. Players can choose the incredibly risque ‘Banana Split’ outfit, or they can attach slices of bread to every single area of whichever character they choose.

Onechanbara: Origins Seeks to Bring Back the Original 2 Games

In 2019 D3 Publisher released Onechanbara: Origin, which is a remastered version of the two original Onechanbara games released only in Japan. Similarly, it has so far only been released in Japan, but there is a definitive plan to bring it to North America.

Producers have stated that the original story will be tweaked a little bit, but the graphics, in particular, will be overhauled and given a distinct cel-shaded animation look. Previously every iteration has been as photorealistic as beautiful superwomen in bikinis slashing zombies with katanas could be, but giving the game a more cartoonish look has fans intrigued.

There is no set date for its arrival in North America, but there is a dedicated fanbase looking forward to the return of Aya and Saki.