Why The Drifting Classroom Is The Definitive Classic Horror Manga 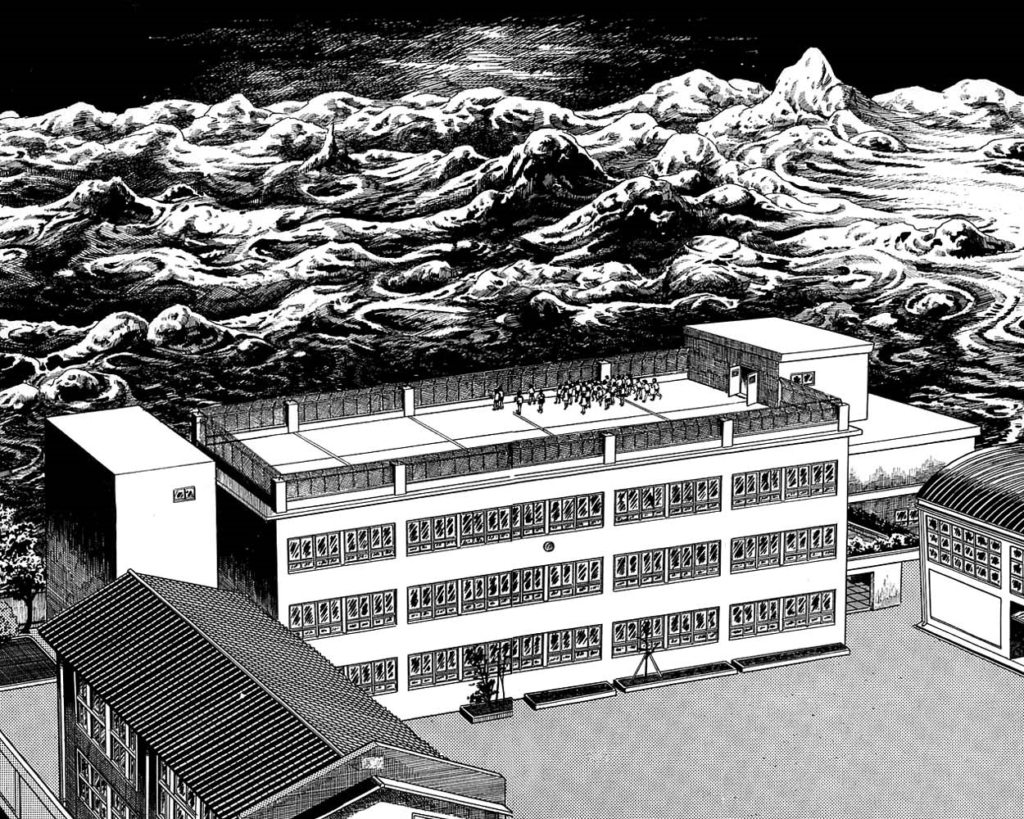 Horror Manga has become something of a hot commodity lately. With Junji Ito becoming an international superstar whose fandom now far exceeds just the ‘anime community’ and has safely become a part of wider internet subculture, interest in the genre has been growing. While the curiosity has still been mostly centering around Ito, and will doubly so when the admittedly fantastic looking anime adaptation of Uzumaki premiere’s worldwide on The United State’s iconic Toonami, some fans have bravely dug further into the genre. Figures who are much more obscure than Junji in Japan like Suehiro Maruo and Shintaro Kago have even been able to grow some worldwide cult reputation. However, despite this horror manga sub-cultural boom, one important creator hasn’t been rediscovered by international audiences that should; I’m talking about the one and only Kazuo Umezu, the godfather of horror manga. Viz Media is reprinting his magnum opus, The Drifting Classroom, in a deluxe edition which an opportunity to read we’re insisting you take. 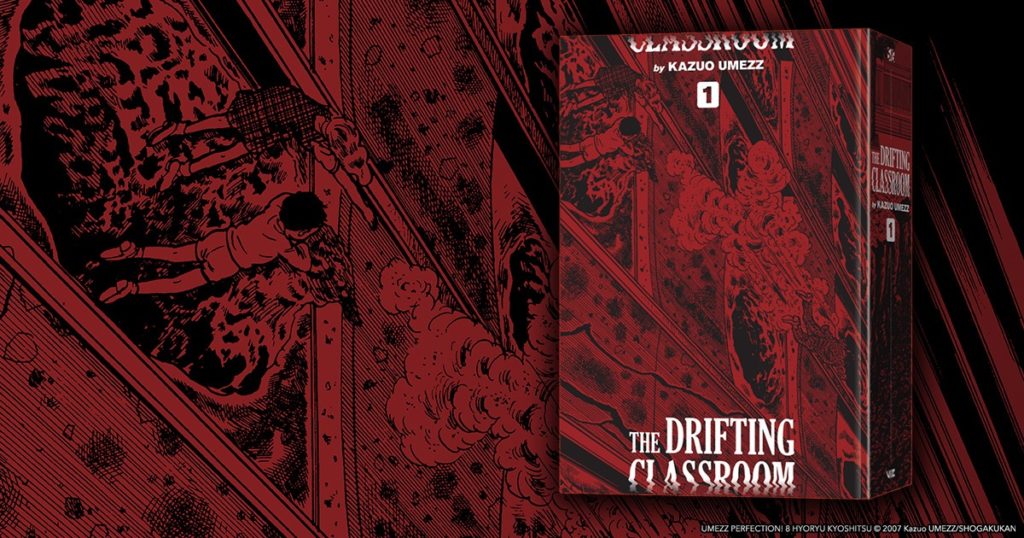 Kazuo Umezu, occasionally stylized as Kazuo Umezz like with the new collection of The Drifting Classroom, originally released this eleven-volume manga in 1972. Almost half a century later, we’re getting a better than ever addition of the out of print (in English) series partly because of the Junji Ito boosted reignited interest in horror manga English speaking audiences have express and because this manga is an absolute essential. More than your I Am A Heros, more than your Blame!s, and even more than your Uzumakis, The Drifting Classroom is the cream of the crop. Most companies aren’t willing to take a risk on practically ancient series at this point yet here Viz Media is giving Umezu another chance in the west. Let’s talk about why.

The Drifting Classroom is a brilliant story that’s best described as a cross of Lord Of The Flies and the classic sci-fi novel series Dune. In fact, if you wanted to exaggerate a little bit, you could even call this manga a proto-isekai. Although instead of a bounty of cute anime girls who are mystified by your cell-phone, the only thing you’ll find in this world is death and despair. The comic starts out with an entire school getting transported to god knows where in the middle of the day. All the teachers, all the students, and even a younger kid who wandered into the building by accident before it disappeared. All that surrounds their elementary school campus now is endless sand and blackness. Truly, a terrifying situation but let me add that the cast is basically all children. Not know it all shonen hero ’12-year-olds’ who act like smarmy adults. Kids.

Order devolves into chaos quickly. Some kids band together, some try to make it on their own. The adults immediately show their true colors, abandoning the children for their own safety. It’s a whole mess and one that means life or death for the kids who got caught up in it. The manga can be broken down into roughly two halves; The first chunk more or less takes place within the school and its immediate surroundings. Kids and adults vie for power and control of resources like food and water. No one has any idea what’s going on and each little clue they do eventually find only asks more questions. One group, okay the main characters of the story, eventually decide to venture out into this bleak world and what they find as they struggle for survival is even more depressing and shocking than what they had to contend with before. 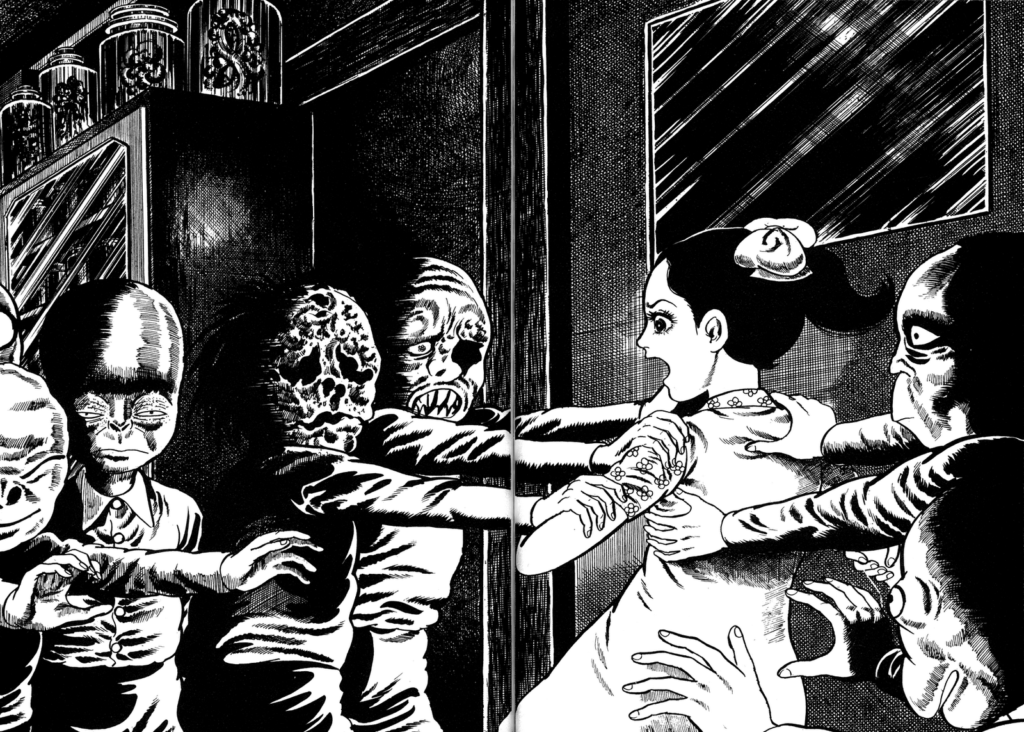 There’s true brutality in The Drifting Classroom that both makes it hard to read but impossible to put down. Despite the otherworldly circumstances, the way physical violence and fear manifest in this comic is very realistic. People aren’t dying because they get morphed into snails or eventually elongate their bodies into giant spirals; Even when weird creatures and other stuff of that ilk start to make their appearance in the comic, people still get hurt and react much like they would in real life. A stab wound looks like a stab wound and if someone gets impaled or snuffed out, it comes off as traumatizing because it could happen in real life. Maybe these acts of violence wouldn’t be carried out by wasteland creatures or by gangs of roaming kids in the really old, but you can’t help think that if a terrible situation like this were to occur, it would unfold exactly as it does in these pages. I want to stress that the series doesn’t take glee in its violence though, it’s not a gore porn manga. Much like the modern master  Gantz creator Hiroya Oku, Umezu wields this harshness carefully to first and foremost tell a memorable story.

So far I’ve only talked about the story about The Drifting Classroom. Like any comic, how something’s being drawn is as important as what’s being drawn. One key reason Junji Ito’s become so popular aren’t just his crazy ideas and stories, he’s got the pen game to back it up. However, his style, while by no means an imitation, also would not exist without Kazuo Umezu and this comic. The heavy contrast between black ink and white space. Stiff facial expressions that accurately convey the terror of the victims and the lost. Knowing when to go all out with a splash page or two-page spread of beautiful dreadful art and hanging back in the paneling to build up the tension; Umezu’s art has been so iconic you’ve seen his faces parodied in anime without even knowing. Just check out this [email protected] collaboration he did to see what I mean. We could probably do an entire feature-length article on what makes Umezu’s art the real do all on its own.

The Drifting Classroom really does do it all. Both as a horror experience that will reach inside of your bone its brand of terror and eerie and as a work of serialized storytelling, Kazuo Umezu brings the best of both worlds. There are all sorts of visual insanity to satiate your darker cravings and yet there’s a narrative here that keeps you coming back beyond that. As far as horror manga go too, it’s hard for me to think of another scary manga that’s this big in scope. Where Ito excels at short stories that leave a lasting impression with their admittedly untouchable artistic presentation, Umezu’s able to weave a tale. One that you’re not likely to forget anytime soon. This new edition by Viz Media packs in a whopping 760 pages a volume, enough time to get lost in this other dismal world right alongside these kids. Good luck!