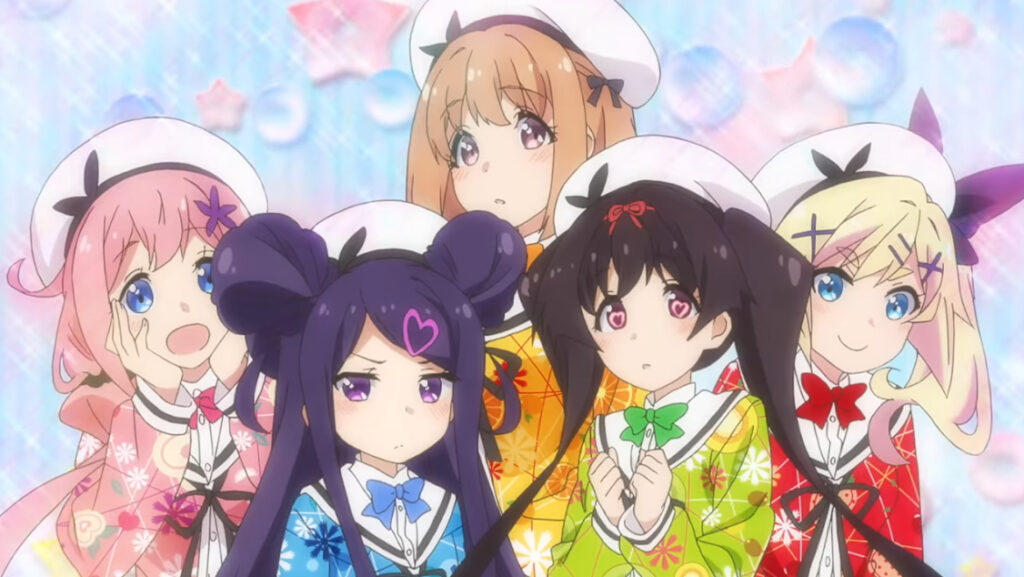 The video features the opening and ending theme songs for the TV series. It also gives a premiere date of Monday, Oct. 12.

It’s based on a yonkoma, or four-panel manga (much like K-On! Or Lucky Star). The manga tells the story of a bunch of idols living together in a dormitory known as the Mouse House.

Note: Or possibly “Rat House.”  It’s the same word (nezumi) in Japanese. But “Mouse” would surely be more appropriate for these cute idol girls.

Unfortunately, they’re not top idols. In fact, they’re way down the ladder for their production company.  Ino Sakura is a rookie, Roko Sekino is a former child actor, Hayu Nukui is a former musician, and Nina Maehara is a former fashion model.  (Sakura is the family name.)

To make matters worse, their dorm will get torn down if they can’t raise the money to save it.    With the help of manager Hoho Kajino, they start a new idol group, Fruit Tart.

These four will be joined by a fifth member, Hemo Midori.

Start Dates, Cast and Other Details

The first promo for the series was in March.  At the time, the series was presumed to begin in July.  However, the date was pushed back to October in the wake of COVID-19. Hopefully the Oct. 12 date will stick.

The manga by So Hamayumiba started out in November 2014. It is published by Houbunsha in Manga Time Kirara Carat magazine.  There have been four volumes so far.

The manga is also known as Ochikobore Fruit Tart.

Funimation will stream the anime series when it starts.