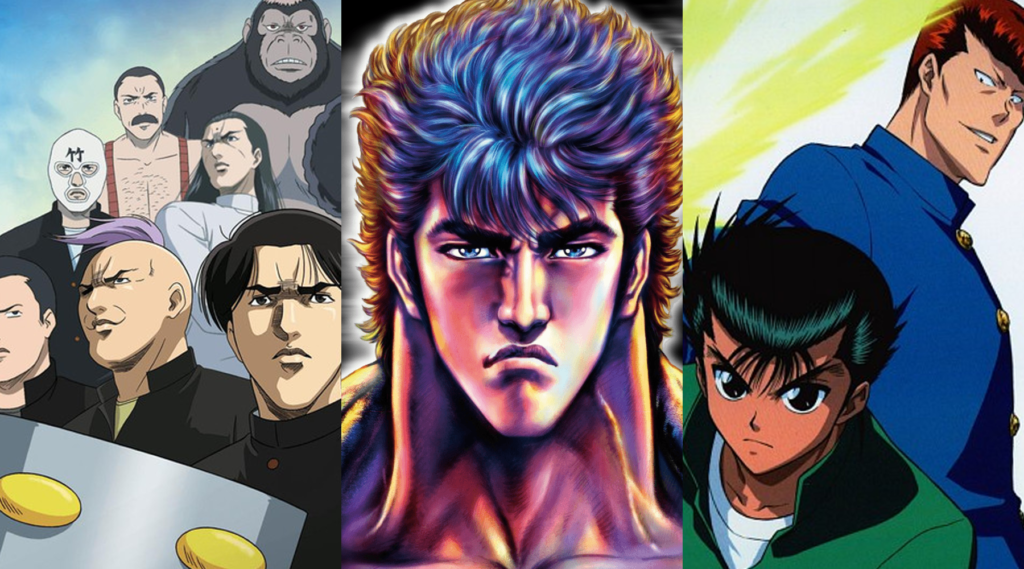 A wise philosopher once asked, ‘What’s better than this? Guys being dudes.’ Actually, it was just some dude on Vine, but the sentiment still struck a chord in internet sub-culture land in the mid-2010s.

A few years later, birthed in the fiery and pressured iron cauldrons of Twitter, a phrase that embodied the same spirit manifested once again, tickling our weary souls: The simple and to-the-point Dudes Rock.

‘Dudes Rock’ could be having exactly two beers with the fellas, but it may also mean taping a guy and his PC to the ceiling of your old-school LAN party because you’ve run out of space to put people and computers.

Some anime, turns out, exemplify that same energy.

Akira’s a legendary piece of animation, not just instrumental within Japanese Pop Culture, but in all of cinema. Has it achieved its acclaim because of a level of sophistication in its cartoonery unmatched to this day, or because two ex-homies rocked harder than anyone ever had?

Young Tetsuo takes rocking out seriously. After Kaneda’s been seen as the local Dudes Rock icon for so long, he balloons and protrudes into a flesh nightmare leaving untold destruction in his wake.

Probably no anime so perfectly represents what Dudes Rock means more than Cromartie High School: Just a gaggle of delightfully oafish delinquents, and the occasional Gorilla, munching on fistfuls of pencils, leading double lives as radio comedians, and rescuing each other when kidnapped by rival high school gangs.

Some other highlights include not realizing one of your classmates is secretly a robot, accidentally erasing said robot friend’s memory, and transforming that robot into a motorcycle during his amnesia spell.

Going by how hard the 2018 Broly movie went, the upcoming, though yet untitled, 2022 Dragon Ball Super movie will surely usher in an entirely new generation of Dudes Rock. Dragon Ball Z has always been a story about monkey dudes trying to rock harder than alien dudes, android dudes, and other monkey dudes.

The movies always strived to raise the power levels higher, but Dragon Ball Super: Broly brought the spectacle to feverish new highs. You have three spikey-haired muscle men wailing on each other until they get stronger and dumber for two hours, every frame impeccably animated.

People out there share ‘Omae Wa Mou Shindeiru’ memes without even knowing why Fist Of The North Star’s an all-timer, which is not Dudes Rock behavior. Fist of The North Star features a whole lot of dudes who brought Dudes Rock innovations in anime to new heights.

Warlords are getting owned. Heads are exploding all over the place. People are dying before they even realize they’re already dead.

These muscle boys are out there, surviving their Mad Max-inspired post-apocalypse by rocking out any way they can!

Haven’t You Heard? I’m Sakamoto is a comedy anime from about five years ago about a dude who rocks the most. Some examples of Sakamoto’s excellence: sword-fighting bees with a pin, running through school hallways in a homemade yeti costume, pretending to get possessed to hip his friends, sumo-wrestling, skillfully yet tenderly turning down the advances of women, and becoming an astronaut for NASA.

He even helps out his local lunch lady, one of the highest achievements of the Dudes Rocks movement.

If Sakamoto singularly embodies Dudes Rock excellence, Onizuka represents all of its goods and evils. He’s a man who would take a sledgehammer to his student’s homes to help them become closer to their parents, but he would just as soon end up in a full body cast just to peek at his co-worker’s panties.

Whether it’s for good or for evil, the dude regularly puts his body on the line.

Anime’s greatest teacher used to be one of those Cromartie type delinquents in a previous life (manga), proving you can carry that energy into adulthood.

Yu Yu Hakusho isn’t the only anime to come from the page of Weekly Shonen Jump here, but when your whole shtick is getting a bunch of guys together to kick a whole bunch of ass in what’s essentially just hell, you better believe that’s Dudes Rock baby.

That’s before we take who those guys are into account: You got a Cromartie High School style delinquent, a brat who shoots lasers out of his fingertips, a cat boy before they were popular, and a demon with a felony rap whose over-compensating for being 5’2.

You don’t need to be the most badass to rock like a dude. Everyone can do it, as long as they get the vibe and walk the talk. If you have more Dudes Rock anime to share, come join our community over on Discord.