Durarara!! Turns 10: When Street Gangs and Urban Fantasy Were The Forefront Of Anime 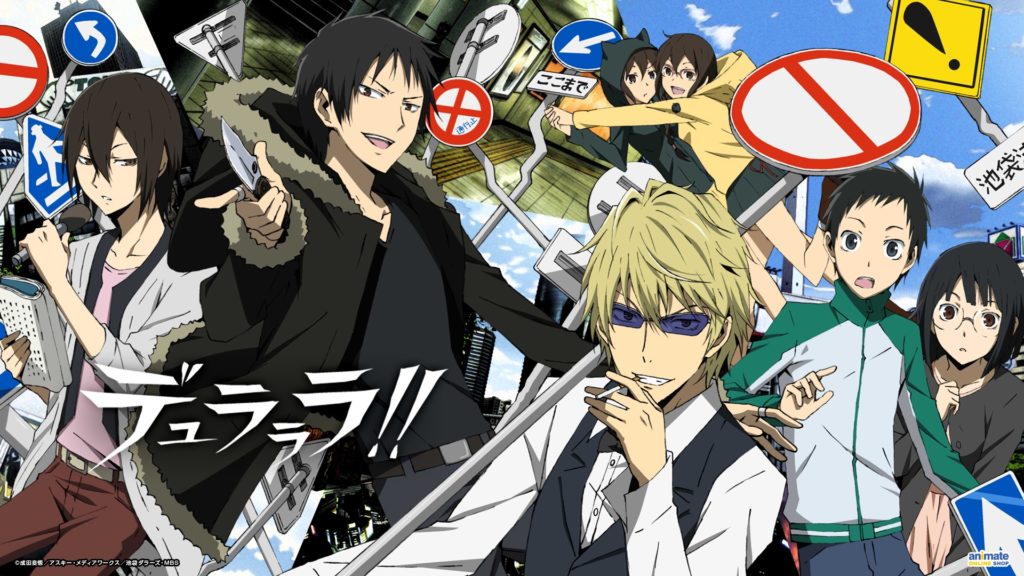 As we embark on a new year and new decade we have to admit to ourselves that our favorites are just getting older and older. Anime, manga, and games that seem fresh in our minds, like we played them just yesterday, are already aging. For instance, Kingdom Hearts 3 is already a year old. Nier Automata is approaching its third birthday, and the original Re:Zero  is gonna be four. That’s only the tip of the iceberg though, as we’ll leave you to look up the premiere dates for iconic shows like Attack On Titan, Puella Magi Madoka Magica, and Bakemonogatari so you can confront aging and mortality on your own time. When it comes to older signature works some age like milk, becoming rotten sooner rather than later. Others though, as the saying goes, age like fine wine worthy of being savored again at a later date. One such show that has, worthy of revisiting and celebrating the influence of, is Durarara!! which turns a stunning 10 years old this month. 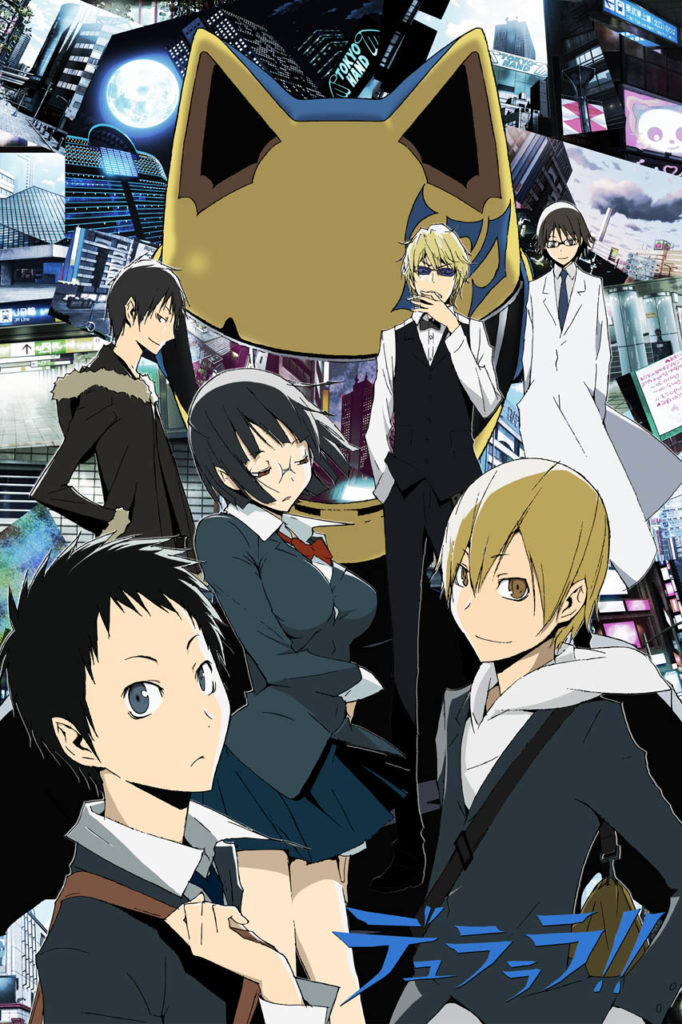 The original Durarara!! came out at an interesting time in anime fandom. Same day legal streaming services like Crunchyroll and Netflix were clearly the way of the future, but they hadn’t yet taken over the entire media culture like they have today. At this point they were prominent enough though that more and more shows were coming out in the west at the same time as they were in Japan, putting an end to the fansub era. Newer fans were able to catch up with where the Japanese scene was at more quickly than ever before. One show that had gained huge cult hit status by the end of the late 2000s was 2007’s Baccano, an odd little gangster tale taking place in 20s and 30s New York, which hit stateside in early 2009. Based on a light novel series by one Ryohgo Narita, fans’ curiosity piqued when they heard another one of his series would be getting an anime. One that looked extremely cool.

Fans hailed the Crunchyroll acquisition of Durarara!! as a miracle. While same-day streaming was becoming increasingly frequent, remember this was still in an era where not ever show was guaranteed to be picked up by someday. The show had the Baccano connection which appealed to fans who were already in the know and it looked slicked enough to grab the attention of anyone who caught a trailer or saw a poster. A real modern-day Tokyo tale with mystery and style, this was the exact kind of show that screamed ‘Cool Japan’, the real cutting edge of anime at the time. Anyone who had a Crunchyroll account at the time had to at least check this thing out and they were guaranteed to be hooked after they did. It was one of the first big shows anyone could legally watch week to week, and if you were around the fandom 10 years ago in any capacity you remember just how huge Durarara!! got. 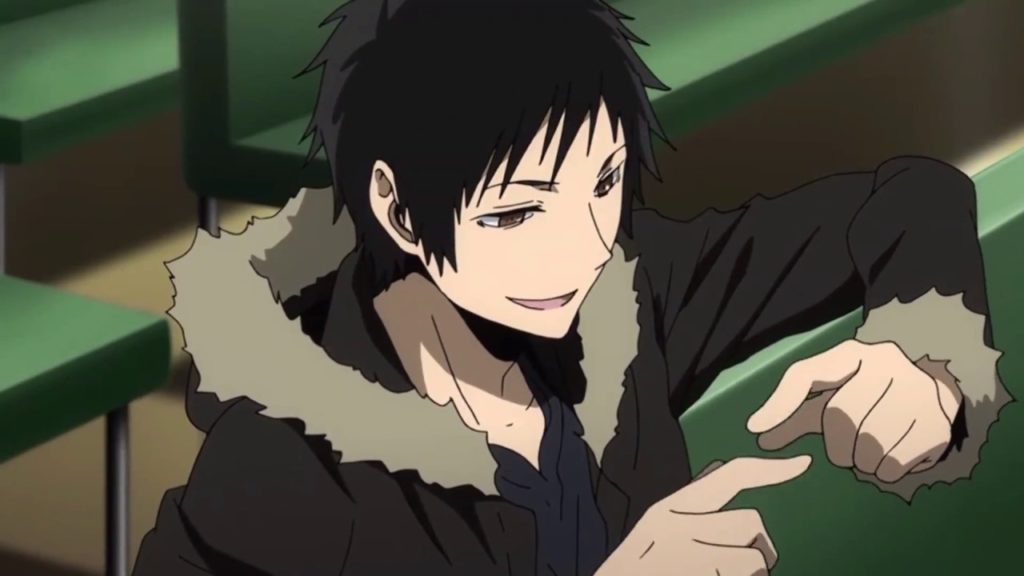 Just about everybody who was going to anime cons 10 years ago tried their hand at a closet cosplay of Orihaya Izaya, pictured above. People could not get enough of the devious schemer whose particular brand of delightful malicious mixed with his fashionable design made him an easy fan favorite. That was only part of the puzzle though, with his contentious love / hate, or hate / hate, relationship with incredibly powerful yet dimwitted bartender Shizuo Heiwajima made for some extremely prime Yaoi bate at a time when we were all a little less woke about that kind of stuff. Always trying to genuinely kill each other, their antics made for a lot of the show’s humor and truly endeared fans to them The Shizuo Izaya pair probably ranks for one of the all-time most popular BL ships, although don’t count on us to do the tumblr / Deviantart research it would entail confirming that.  As fun as they were, this colorful duo were only two of the many oddballs that lived in the zany Durarara!! world.

As Baccano was before it, Durarara!! had something of an ensemble cast; It followed a whole alphabet soup’s worth of characters none of which you could call the single main character. Of course, it followed a handful more closely than others, like our plucky high school trio pictured below, Mikado, who acted as the main audience vantage point, and his best friends Kida and Anri. With an entire slew of physically distinct characters each with their own unique personality, there was so much for any kind of anime fan to sink their teeth into. Cosplayers had a whole buffet of choices and those who were just looking to be entertained would not be disappointed with all the banter between these personalities, which at times involved Shizuo lobbing refrigerators at people. Not that the show all just pretty faces with cool outfits and sharp tongues, the show catered to fans that liked their anime with depth as it had the story-telling chops to match its strong visual presentation and attitude. 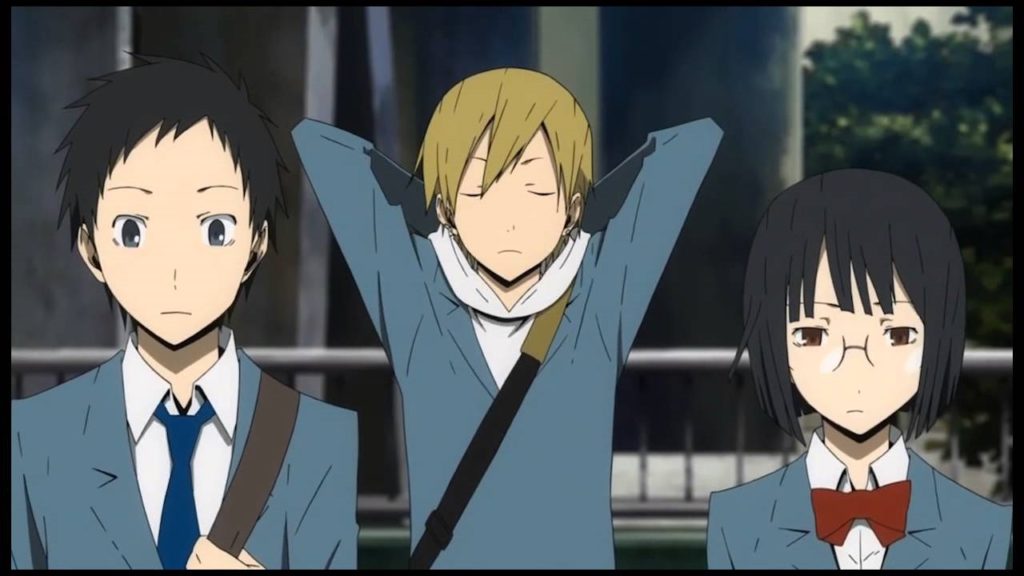 What would the point be of having literally dozens of neat characters if you weren’t going to do anything memorable with them? Durarara!! takes its ensemble cast and drops them into this magically realistic world where most days seem like any other day but beneath the surface, anything could go down. The show introduced an international audience to the town of Ikebukuro, taking place nearly entirely inside, a part of Tokyo known for having a little bit of everything. Real-world Ikebukuro has its fashionable malls, all sorts of nightlife, an otaku shopping district that caters towards Fujoshi, and its fair share of shrines and parks. There’s even an Aquarium, an Evangelion store, and a TGI Fridays. Truly, It’s really a microcosm of all Tokyo has to offer. Taking place entirely in this one area of the city, Durarara!!  made Ikebukuro a tangible place for its viewers, a playland where there’s something wild going on.  Of course, the show did take a couple liberties.

While the real-life Ikebukuro always has some rowdiness, Durarara!! introduced two elements that let the fictionalized version of the town shine; Namely street gang culture which did exist in Ikebukuro at some point but not to this anime’s dramatized degree and making mythology part of everyday life. Not just Japanese mythology either. One of the main characters in Durarara!! is a woman named Celty. She does odd jobs around town and lives with her boyfriend Shinra who she’s deeply in love with. An otherwise ordinary young woman, she just happens to be a Dullahan who is a kind of headless faerie from Irish culture. You also have Saika floating around, a sentient Katana who makes an army of zombies who’ve gotten into tussles with some of the gangs around town. The most interesting aspect of the inclusion of fantastical elements in the show was how they weren’t the show. Some of the plot-lines and mysteries do center around these otherworldly entities, but they’re only a smaller part of the great narrative. 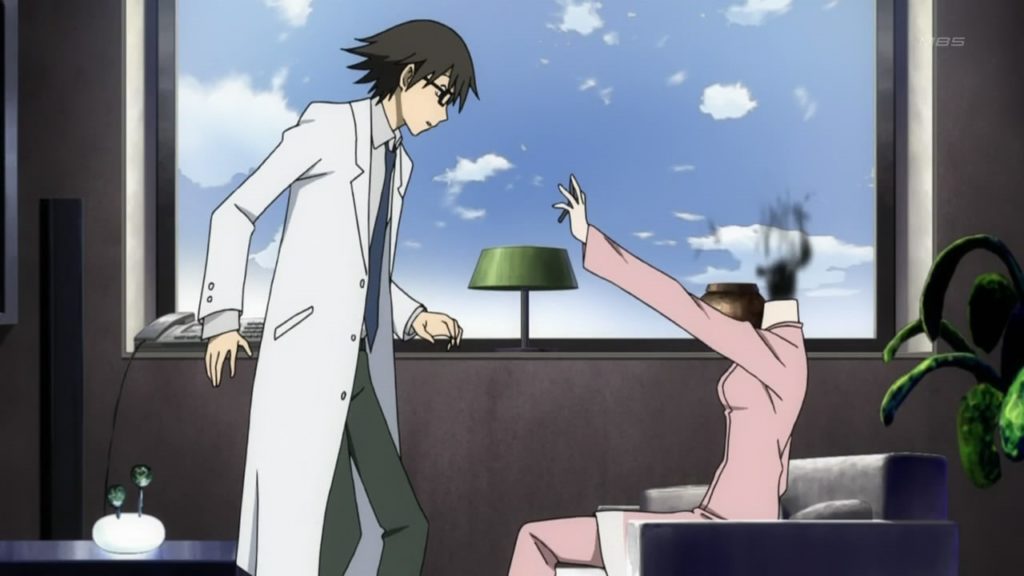 Durarara!! successfully interweaves so many different stories and through-lines by taking its diverse cast and bottling them all up in one city. Lots of butterfly effect going on, with moves characters make early on not necessarily coming to fruition until late in the show. Between the machinations of the different Colors gangs all throughout town, each character’s personal stories whether they be human or not, and the bastard Izaya Orihaya playing 12th-dimensional chess with the entire cast, the show is as riveting as it is endearing. Few shows could pull off just how much Durarara!!  did and as seamlessly as it made it all look. The oddball spiritual successor to Baccano offered so much to the audience and packaged it with a new sheen that represented the absolute cutting edge of Japanese Pop Culture at the time. Of course, foreign fans ate the show up.

If there was anything about Durarara!! that failed it was that its sequel came far too late. Fans had to wait a whole five years in between season one of Durarara!! and the three-part Durarara!!x2 that finished adapting the entire light novel series. The sequel series may have been a little more inconsistent than the original, but it had some moments that shined even brighter than the original series. In particular, what it did the Mikado alone made the five year wait worthwhile. Regardless of being worthwhile though, five years is a long time and lots of people had moved on from the series in that time. It wasn’t new or cool anymore and the slick rendition of Tokyo it presented had become commonplace in both other anime and internet making Japanese pop culture 100 times more accessible than it had been just five years before when the original came out. That said now that its been 5 years since the sequel wrapped up and 10 since it originally aired, we look back at the original fondly. With yellow helmet and shadowy scythe in hand, it at one point was the vanguard of anime, carving a path for everything to follow.