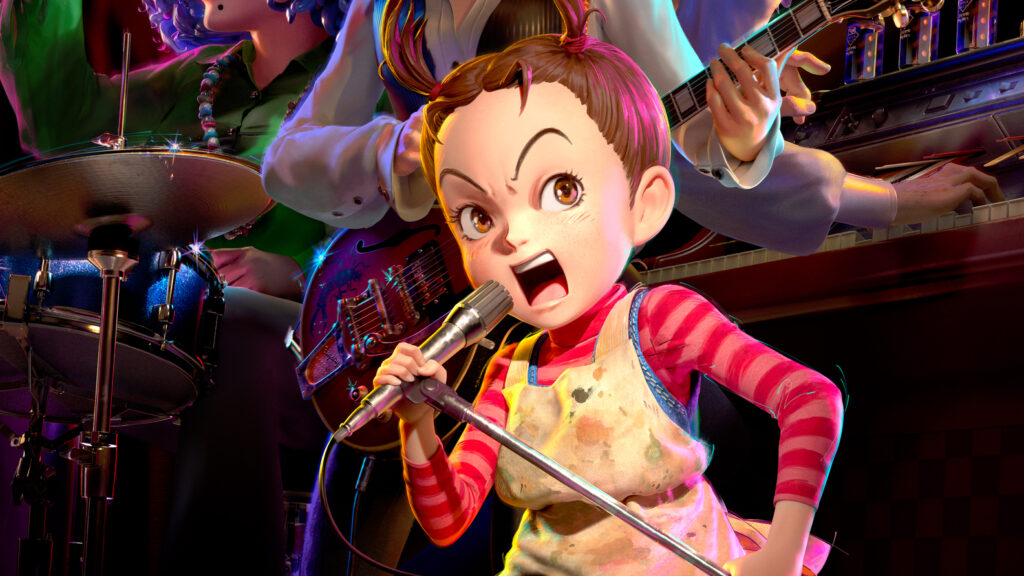 Goro Miyazaki is both blessed and cursed by the Miyazaki name. Given an opportunity by his father, the great Hayao Miyazaki, to direct a movie allowed him the opportunity to enter the Japanese animation industry in a privileged position compared to that of his peers. At the same time, the burden placed on his shoulders resulted in high expectations that Tales From Earthsea and From Up On Poppy Hill were unable to reach in the eyes of many critics and audiences alike. Whether through genuine flaws or unfair comparisons to the man himself, Goro Miyazaki was unable to step out of his father’s shadow.

So he chose to distance himself. As Studio Ghibli wound down internal production following the lower-than-expected box office performance of When Marnie Was There, Goro Miyazaki sought new partnerships for the studio. He worked on a CG-animated co-production with Polygon Pictures in the form of Ronja the Robber’s Daughter, a series that similarly shares the honor of being Ghibli’s first TV anime. Previous attempts by the director to ape the visuals and tone of his seniors were treated with disinterest by many, so why bother?

That’s where Earwig and the Witch comes in.

Earwig and the Witch brings Goro Miyazaki’s interest in CG animation in-house, but not without its fair share of controversy. Even the initial announcement was hounded with derision for scrapping the artistic style the studio built its reputation on for a style that was unflattering in early still images. This reputation never went away as trailers were released and the English release drew ever-closer, following its initial premiere on NHK in Japan on 30 December. Then again, at this point, I’m not sure if this Miyazaki cares for the opinion of those who dismiss his work out-of-hand without experiencing it for themselves.

Regardless of your thoughts on the film itself, Earwig and the Witch is a rejection of the burden of expectation from those that came before him and Goro’s unashamed attempt to chart his own path within the industry. The shift to CG animation is not simply a money-saving technique (although the small number of locations within the film and at-times barren environments could be chalked to that) but a creative choice Miyazaki takes advantage of throughout. In an interview with Letterboxd, he noted that he was ‘able to see what the possibilities of working with 3DCG in terms of being able to [make] the characters act more, perform more, and show a different range of emotions,’ and you see this come through in the breadth of emotions expressed by these characters as the movie progresses. Anger and happiness are both exaggerated to a cartoonish extent in visuals that would look bizarre in standard Ghibli animated fare. 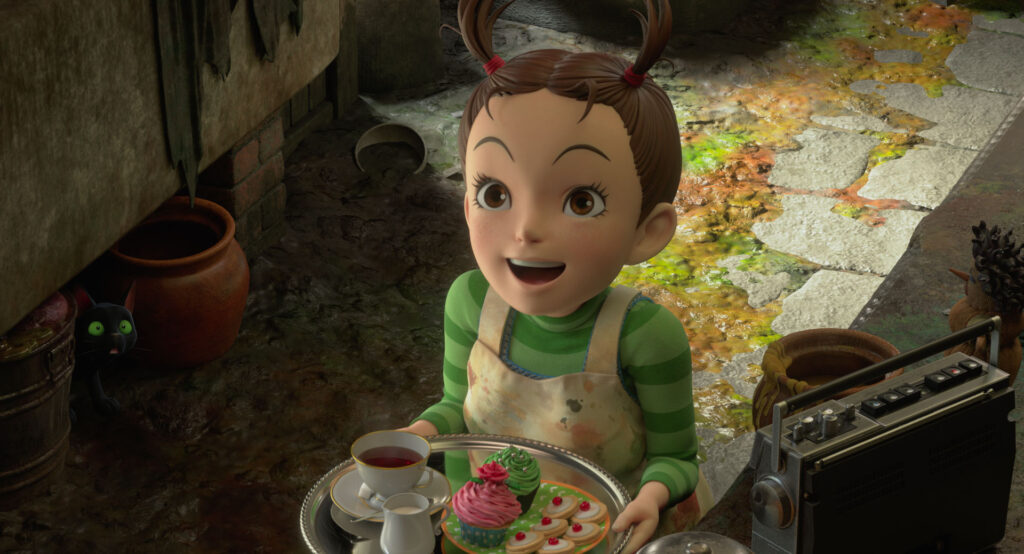 Animation, far from being deserving of its initial derision, is the film’s strongest component. While it looks stilted and uncomfortable in still images, in motion the director’s inspiration from stop-motion creatives like Studio Laika is readily apparent. It’s remarkably easy on the eye. Where the film falls apart is in the story.

The movie is adapted from the final posthumously released book of the same name from Howl’s Moving Castle author Diana Wynn Jones. Earwig and the Witch follows a young girl called Earwig who is unaware of her parents being witches; she was abandoned at an orphanage from a young age. At the age of 12, she’s taken in by Bella Yaga and Mandrake, a bizarre couple who are also witches. Earwig didn’t want to leave the orphanage at first, and she is determined to get her own back on her new foster parents and learn the truth about their past. While the film may be an adaptation, the film has taken many liberties with the source material, both out of necessity and to allow Goro to put his mark on the story. 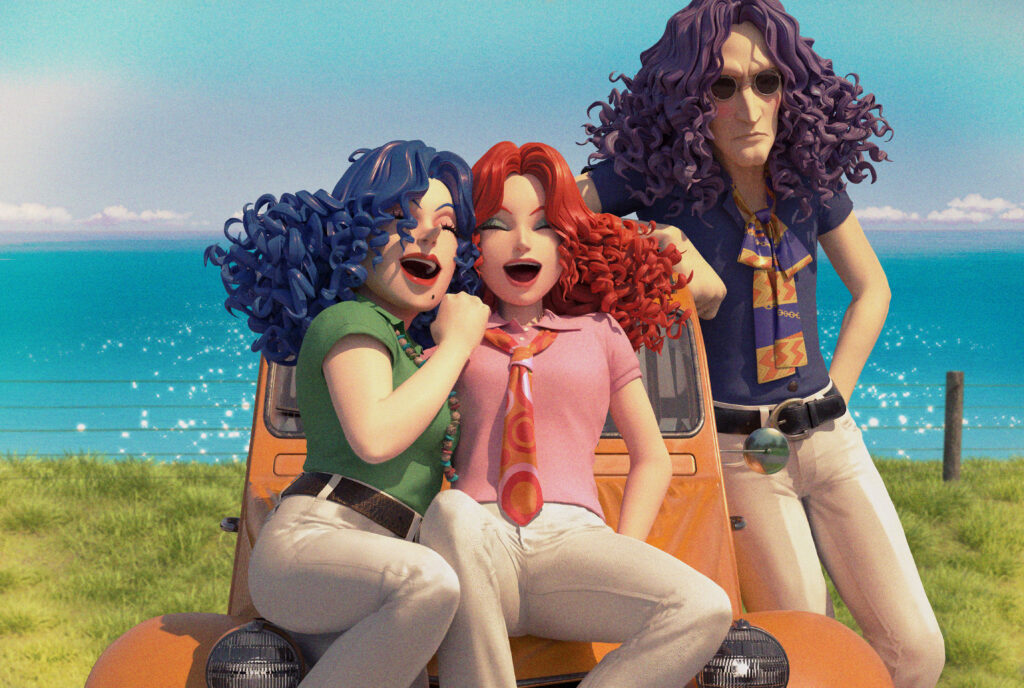 Many changes are a result of Earwig and the Witch being published in an unfinished state. While technically a completed story, it was an early draft with work still to be done and gaps that needed filling from before the author’s death. One of the major changes made for this movie that is featured prominently in promotional material was the decision to make Bella Yaga, Mandrake, and Earwig’s mother members of a British 70s rock band, touring together as bandmates and close friends before they split up.

While this rock storyline could be a key emotional cornerstone of the movie, it never materializes in any significant way. Since the movie lets us know about their past early on, and promotional materials for the film make it impossible to go into the film without knowing this side to them, we are never in sync emotionally with Earwig for much of the film. When she wants to stand up to her foster parents, we know that they have more reasons to care for her than they’re letting on, and while Earwig knows nothing about her parents’ past, we do.

Even though Earwig and the Witch is only a brisk 80 minutes in length, the first hour meanders along without purpose because we’re left waiting for this revelation to occur. There are enough funny moments to keep us just about entertained, but they feel more like isolated skits and failed attempts at emotional intimacy than anything worthwhile. The last 20 minutes rush by with breakneck intensity as the climax of the film flashes past before we can even blink, with barely enough time for a rather tepid and sudden conclusion. 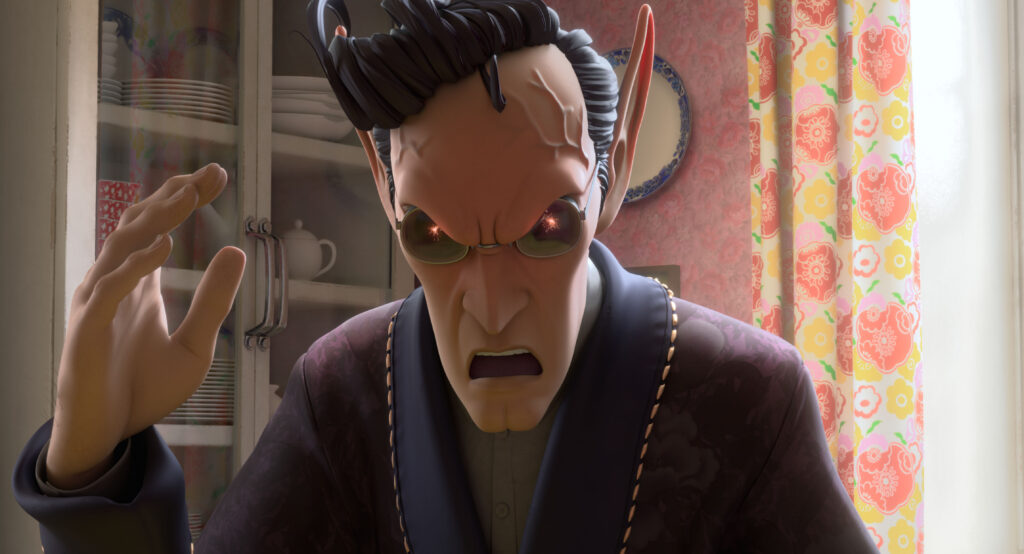 It’s a blight on an otherwise surprising jaunt through Studio Ghibli’s first internal experiment with CG animation. The music for the film from Satoshi Takabe compliments the quaint British countryside setting, while the rock music performed by Earwig’s mother’s band is surprisingly great (a good thing since you hear it a lot throughout the film). Characters are another high point, as I was surprised by how much I was invested in Earwig as a person by the end of the film, even after my initial concerns. Her spunky attitude and wits made her rebellious antics entertaining, and it’s the animation that makes us care for the entire cast.

But what’s a strong cast without a good story? Interesting characters with high-quality voice talent and strong animation means little when the final product makes even 80 minutes feel burdensomely long. With a stronger script, this could have been a surprise hit within the Ghibli catalog. As it is, it’s little more than an acceptable way to pass the time.