Eden is one of the most important Netflix original anime projects of 2021 so far. For the first time, rather than licensing an anime, adapting a source material, or creating a new story with an established character (in the case of Godzilla Singular Point), this was the company’s first wholly owned original IP. A manga was produced to promote the series, they’ve collaborated with BEAMS, and they’ve pushed the show as a dream project with big names like Fullmetal Alchemist: Brotherhood director Yasuhiro Irie and Kevin Penkin both involved.

While only a 4-episode OVA, this is an ambitious project with big hopes that it could provide a blueprint for Netflix to expand into further original projects that could propel their anime expansion. Potential exists within the world of Eden, but this all-original anime production feels both intensely modern and stuck in the past. Ultimately, Eden needed to be a standout hit to prove this original formula can work in future projects, and the final product feels only just about good enough.

In an interview with Anime News Network, producer Justin Leach noted that Eden was a project long in the making, with the idea first coming to them all the way back in 1998. Since then, and with the dashed hope of this possibly becoming a major American CG feature film, the project has been revived as a 4-episode OVA for Netflix. Despite once being pitched with Hollywood in mind, the anime seen today is much more reminiscent of the glut of 1990s OVAs seen across the anime industry during its conception than a forgotten American project.

Even the sci-fi concept feels right at home with some of the OVAs of the time. Many years in the future, Eden exists as a nature-filled utopia run by robots whose human masters have long since vanished. One day, two maintenance robots accidentally awaken a human baby girl from stasis that causes them to question the long-held ideas that humans were a forbidden ancient myth. Together, the pair secretly raise the child in a haven outside Eden.

What this setting allows for is a rather beautifully realized CG world put together by Taiwanese animation studio CGCG Studio (known for work on the Star Wars: The Clone Wars series among others) in partnership with a core Japanese creative staff and additional talent around the world. Mostly through environmental cues, we can understand the function and workings of this world without humans, including their work harvesting apples for survival and ensuring the earth’s safety.

It also makes the introduction of humans into this (in turn somewhat alien) robotic environment disorienting, similar to how it fuels a crisis of faith in the two robots who become the child’s unintentional mother and father. Suddenly, humans which were described as a threat are right in front of their eyes, in the form of a baby named Sara that simply laughs at their reaction to bugs rather than hurt them.

It’s an engaging setting and one that would feel right at home alongside the breadth of 90s sci-fi OVAs. The most similar modern example I can think of is Deca-Dence, thanks to its setting and the role of robots in the world beyond a point where normal human habitation is possible. Unfortunately, it’s here where the problems begin to manifest.

Referring back to that interview from before, Justin Leach admits there is a lot more to explore with the setting of Eden than what we see in the 4 episodes of the show produced here. Unfortunately, this manifests itself strongly in the final product to the detriment of the story being told. Deca-Dence develops its ideas and worlds heavily across its 12-episode runtime, finishing on a note where, although there is certainly more that can be done within the universe, the main story has been neatly tied up within its scripted run.

Eden is told at a break-knock pace that rushes to an ending in under 100 minutes, and as a result, a lot is underdeveloped or left up to interpretation. The whole Eden project and its origins, as well as the conflicts within the project that play a significant part in the plot as the episodes roll on, is given naught but a few minutes of exploration and feels passed over and shallow. Considering its importance in the story, knowing little more about it than a few video flashbacks and newspaper headline grabs is unsatisfying.

We spend very little time with robots outside of our main cast, despite playing a role in the inciting incident that turns them into close protectors of Sara and turning their back on the comfort they experienced before. Meanwhile, Sara’s place as a human among robots is touched upon but never given the personal exploration needed.

Compounding this is the overly predictable nature of the story that again feels like a product of the story’s long development. Back in 1998, a tale such as the one told within Eden would feel somewhat revolutionary, or at least surprising. Today, the story of a world polluted by humans where a small subsection tries to find an escape from the consequences and rescue the planet is just our daily reality, never mind the basis of other, better stories, including in the family-friendly demographic this aims for (see: Wall-E). If you have even a passing familiarity with these stories, you can guess almost every plot twist long before it happens. 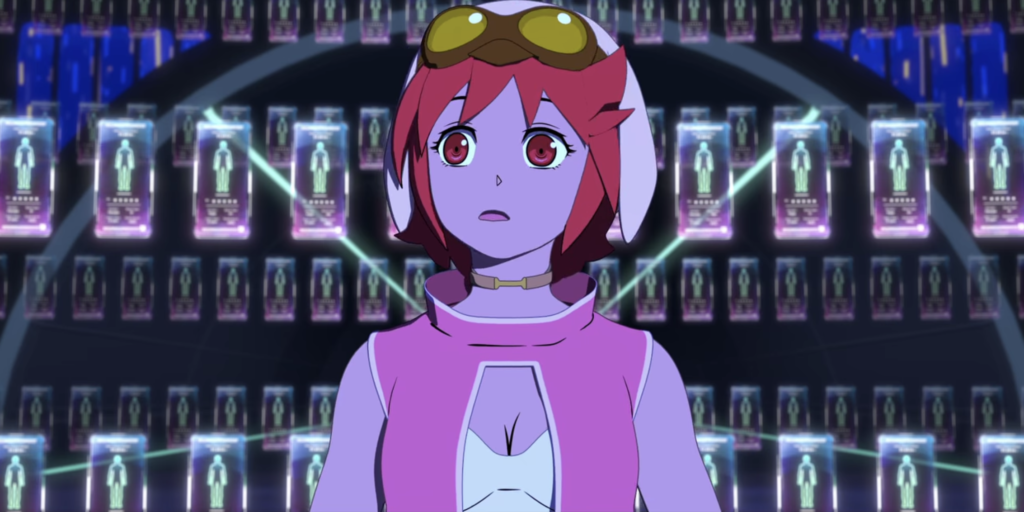 Its final issue comes in format. With its short runtime, episode breaks interrupt the story to the point it feels better suited to a movie than the episodic OVA format it’s been given. Episodes end in awkward places, and even Netflix’s auto-skip doesn’t prevent credits feeling like an interruption and not a breakpoint. What this needs is more time, whether as a 2-hour movie with reigned in concepts to fully explore characters and ideas, or as a longer series where the full scope of this world can be developed.

As negative as this may sound, Eden is far from a bad first attempt at a Netflix all-original project. Rather, it feels forgettable and rushed. A great setting and some stunning animation from CGCG Studio (created on ones at a full 24fps without any smoothing or skipping present in other CG anime) doesn’t hide an undercooked story and characters, and a lack of proper world-building that hold this show back from greatness.

You won’t dislike your time in Eden, but you won’t be jumping back in any time soon.

Eden is now streaming on Netflix.

other Jacob Parker-Dalton 7 days ago