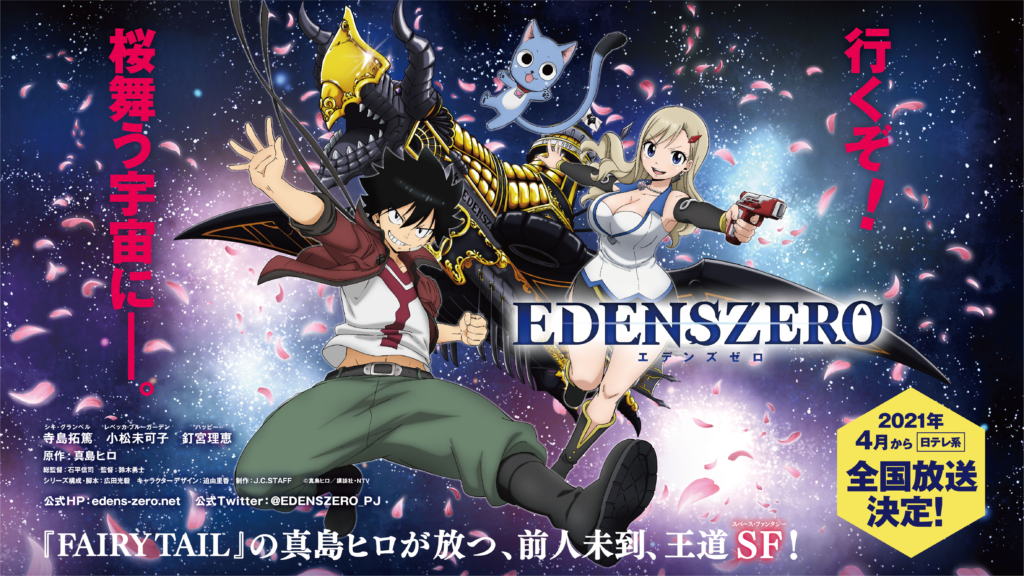 Fairy Tail fans will be happy to know that Hiro Mashima has returned to TV anime. And Happy will return as well.

An anime adaptation of Mashima’s manga series Edens Zero will arrive in April. Despite what you might have heard, Edens Zero is not quite a sequel to Mashima’s earlier shonen series. (It’s not a direct sequel to Rave Master, either.)

This time around, the series is a science-fiction space adventure, rather than an epic tale of wizards and magic. Edens Zero will probably seem vaguely familiar to anyone who is a fan of Natsu, Lucy, Gray, Erza, and especially Happy.

Just take a look at this promo video, which Weekly Shonen Magazine posted to its YouTube channel on Wednesday (Japan time):

So far, most of what we know about Edens Zero comes from the manga. Edens Zero tells about a boy named Shiki Granbell (voiced by Takuma Terashima). He’s similar to Natsu, although people have compared him to Gray as well. He and his friends are searching for the legendary goddess known as Mother (this is not a translation of okaasan or something similar; the name is ‘maza’ in katakana).

Shiki is joined in his quest by Rebecca Bluegarden, who really does look like Lucy (but she’s voiced by Mikako Komatsu, not Aya Hirano).

Happy is Rebecca’s cat. He’s pretty much the same character and voice actor (Rie Kugimiya) as before, except he’s an alien android.  As an android, Happy doesn’t have wings, but he can transform. In the manga, these three are soon joined by Weisz Steiner. (His voice actor isn’t revealed in the trailer.)

The title of the series comes from the name of their spaceship. Although this is an outer space story, there are elements of magic in it as well. Specifically, Ether allows Shiki to manipulate gravity.

There is no apostrophe in ‘Edens.’

The Edens Zero manga started in 2018 in Kodansha’s Weekly Shonen Magazine (the same magazine that ran Fairy Tail, naturally).  You can read the manga at Crunchyroll.

The anime series will begin on 10 April.