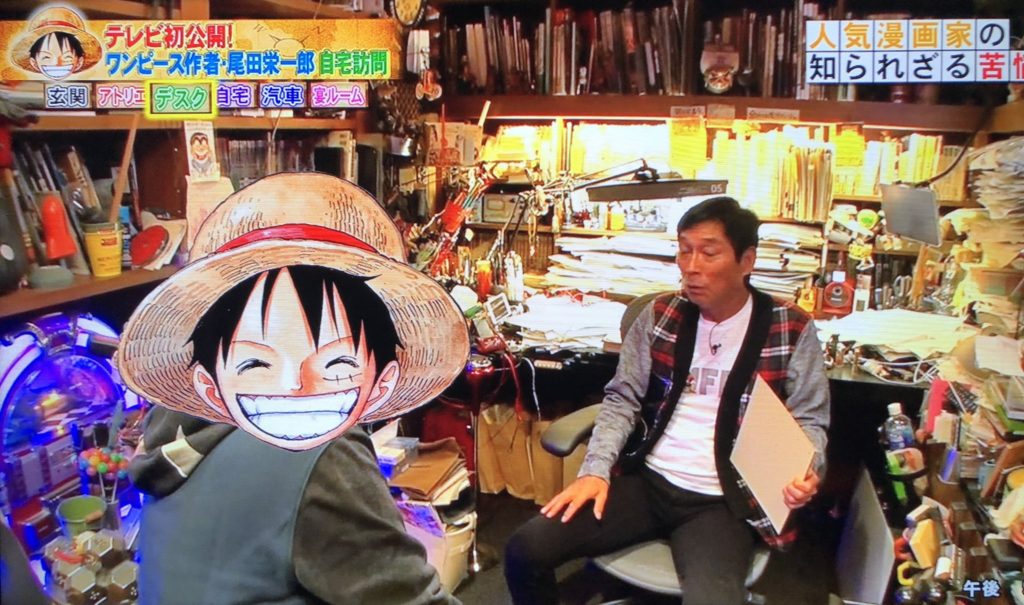 There is no doubt that Eiichiro Oda, creator of One Piece, is a genius. He’s been writing the same series for over 22 years now since it’s debut in 1997, and far from slowing down, he’s only gotten better at telling his stories with age. I’ve long wanted to know the secret behind his genius, and a rare peek into his studio and house during the TV show Honma Dekka might have provided some clues to just that.

The show saw comedians Sanma Akashiya and Beat Takeshi invited into Oda’s house (or more accurately, mansion) for a tour, and fans of the mangaka were quick to share their reactions along with screencaps on Twitter. The first thing that caught my attention was Oda’s desk, which you can check out here:

Although the type of organized chaos ordaining the desk is pretty typical for mangaka and creatives in general, Oda is blessed with a remarkably large workspace for a Japanese office, no doubt something he was able to afford thanks to his massive earnings through One Piece. Having such a big workspace must be great for Oda in particular, as he still draws with ink and not digitally like many other mangaka these days, meaning that he needs to have thousands of sheets of paper to hand at all times.

Next to Oda’s workspace is that of his assistants, who do the majority of the grunt work for the ongoing serialization in drawing backgrounds and adding effects. Once more no doubt due to Oda’s considerable wealth, the space afforded to his assistants is very generous indeed, with large desks, a huge TV, as well as life-sized Terminator cheering them on (or perhaps looming over them).

These panels have been installed above the assistants’ desk to function as digital windows, which is apparently a favorite feature of the assistants – one of them said during the show that “When there’s fish [on the display], we’re less stressed.” Oda must take the wellbeing of his assistants quite seriously, as these displays do not come in cheap, retailing for around $700. And there’s three of them!

While the digital windows may have been a tasteful purchase for the purpose of relieving stress, I’m not sure the same can be said about Oda’s massive figure collection and the dioramas he has placed them in. The figures on display here appear to be all from One Piece, which is slightly strange considering it is Oda’s own series, but nevertheless this display is something collectors can only dream of.

Something else I’m not sure is exactly “normal” is the fact that he has had a train ride installed in his house. I assume this is for Oda’s kids, but you never know. He might enjoy riding on it every now and again to relieve stress. He also had a few UFO catchers in his mansion filled with, you guessed it, One Piece figures, only adding to the fairground feel of the mangaka’s mansion.

So what did we learn from this brief tour of Eiichiro Oda’s mansion? Mainly, it’s that wealth does not automatically make you classy. I absolutely adore the dorky features of chez Oda, from his massive figure collection to his personal train ride, all of which no doubt make Oda extremely happy despite being somewhat tacky. Furthermore, when doing anything creative, it’s very important to be in a comfortable and relaxing environment to facilitate concentration, so having these somewhat strange features to his house no doubt serve to help the mangaka concentrate, as well as being fun distractions from time to time. Perhaps installing a train in my house (not mansion) will help me be more creative? I wonder…