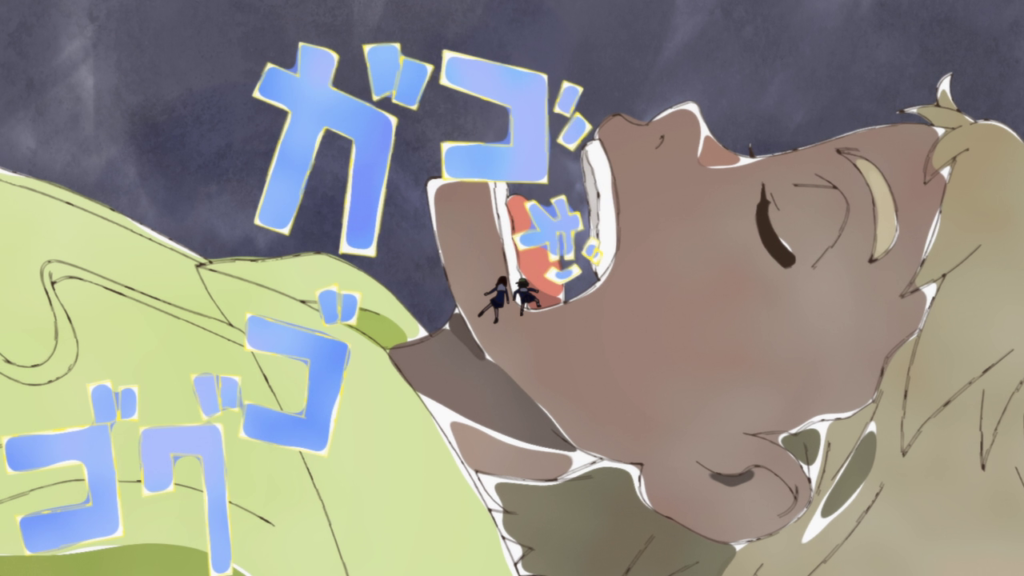 Things come to a low ebb in Keep Your Hands Off Eizouken! episode 10 as Kanamori comes into conflict with the powers that be and Midori struggles to finish up her storyboards. An outing with Doumeki, however, provides just the diversion that the team needs to regain their focus. They even end up winning over one of their oldest enemies along the way.

In terms of adaptation, this episode marks the series’ first misstep in a good while. Taking disparate elements from chapters 16, 18 and 20, it attempts to cover too much content at once, which ends up devaluing the effect of the disparate story elements as a whole. Science SARU’s production, however, remains on point – making up for diminishing quality with even more inventive animation and cinematography.

After having decided last week that their latest short would be based on the town of Shimbashi – even receiving local government funding to accomplish that task – the club members need to get down to brass tacks and make a start on the production proper. But several problems are impeding their progress, not least of which the fact that Midori can’t seem to come up with a good finale.

What Eizouken episode 10 puts into sharp focus this week is how Kanamori’s philosophy puts her into conflict with the higher-ups around her. In the first place, the teachers aren’t too happy about the club attempting to make money off of their activities by participating in the Comet A doujinshi fair, and the Student Council’s secretary Sowande (not the President, important to note) struggles to see her perspective. Why attempt to go outside of the school bubble and into the real world when everything inside is protected? Resolving this conflict is one of the aims of this episode, but its structure doesn’t allow it to do this very well, as we shall see.

Returning to the content of the club’s new short, we see that there are plenty of interesting anime-original elements that serve to spice up the overall story. Some of these are carried over from last week – such as the local council funding the production – but such elements as an open voice acting audition judged by Tsubuame are a first. Looking closely at the audition’s participants, in turn, reveals some interesting information about the staffers over at Science SARU…

Unusually prevalent in Eizouken episode 10 are also the sheer number of references to other anime works and famous figures within the industry. That’s not to say that these references are out of place or entirely unexpected – the first episode did feature an extended homage to Future Boy Conan, after all –  but when Midori takes on the likeness of Hayao Miyazaki just before Kanamori comes to a stop on her bike just like the famous scene in Akira, you can’t help but notice.

Holding back the production of the club’s latest short, whatever it may be, is Midori’s struggle to complete her storyboards. There’s no particular reason given for this struggle other than writer’s block, but what’s important is that this struggle gives Doumeki a much needed moment to shine.

Ever since being introduced much earlier on in the anime than the original manga, Doumeki has been in a bit of an awkward situation. Given that so much of the content that the anime is adapting doesn’t feature her until later on, Science SARU was stuck between a rock and a hard place: either put in the extra effort to rework the content to include her, or simply ignore her entirely. Unfortunately, the latter cases have been more common, and in this sense, her absence has always been felt – take, for instance, the club outing to the baths in episode 7. Was Doumeki simply not invited? That doesn’t seem very nice, nor does it shore up her position as the fourth member of the group.

Thankfully, Eizouken episode 10 changes all of that. Starting from a scene at the beginning of the episode where Tsubame and Midori investigate the interesting noises made by a napping Doumeki in the Sound Club room, the entire second half of the episode is dedicated to an adventure with the sound-obsessed student as she tries to capture an elusive gong for the collection. 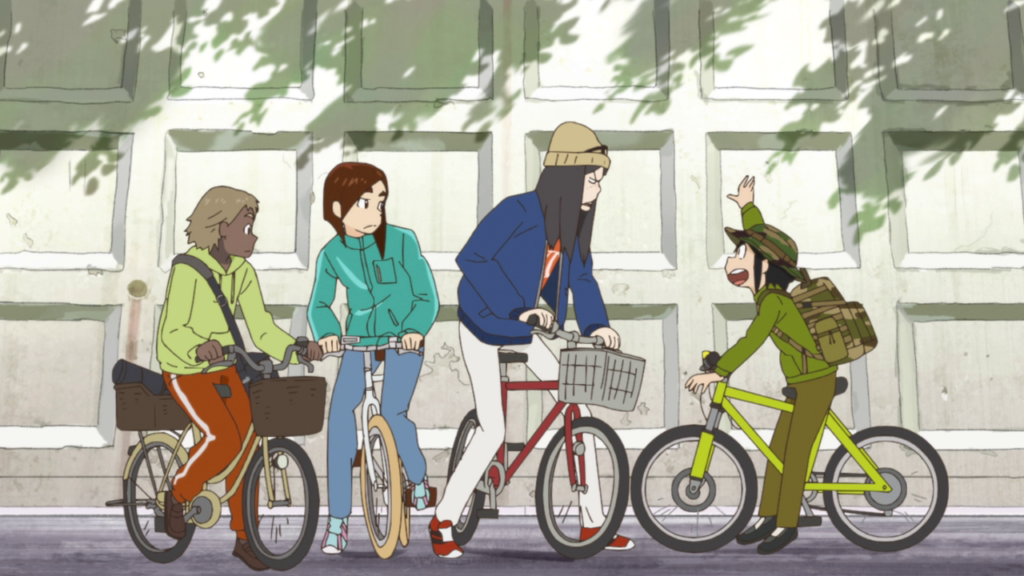 Far from just ticking the boxes, Doumeki’s scenes in Eizouken episode 10 are also perhaps some of the best. The sequence where she explains audio editing in a 3D space is truly fascinating and insightful, while the climactic scene to the sound recording – everything falling silent as the gong sounds – is truly mesmerizing.

It’s such a shame, then, that Doumeki’s story is shoved into Eizouken episode 10 alongside so many other elements. Also present alongside Doumeki’s adventure is Sowande’s character arc, as she comes into contact with the Eizouken and discusses with Kanamori her philosophy and worldwide. By the end, she’s more or less accepting, but I wouldn’t blame you if you didn’t notice – so many other things are going on that you hardly know where to look.

What caused this problem was Science SARU’s decision to adapt chapters 16, 18 and 20 in one episode, missing out chapter 19 in the process. That last point is particularly disappointing given that that chapter explores how Kanamori and Midori first became friends, but its exclusion from Eizouken episode 10 means that the disparate stories involving Midori and Doumeki (chapters 17 and 18) are mixed in with that of Sowande (chapter 20) with no break in the middle.

Diversion from the source material is often needed in an adaptation, and Eizouken has benefitted from this in the past. Even so, I’m convinced that if Eizouken episode 10 had simply followed the structure of the original manga and followed Doumeki’s story with the flashback story in chapter 18, then the significance of Sowande’s character development would have been better served for next week’s episode. 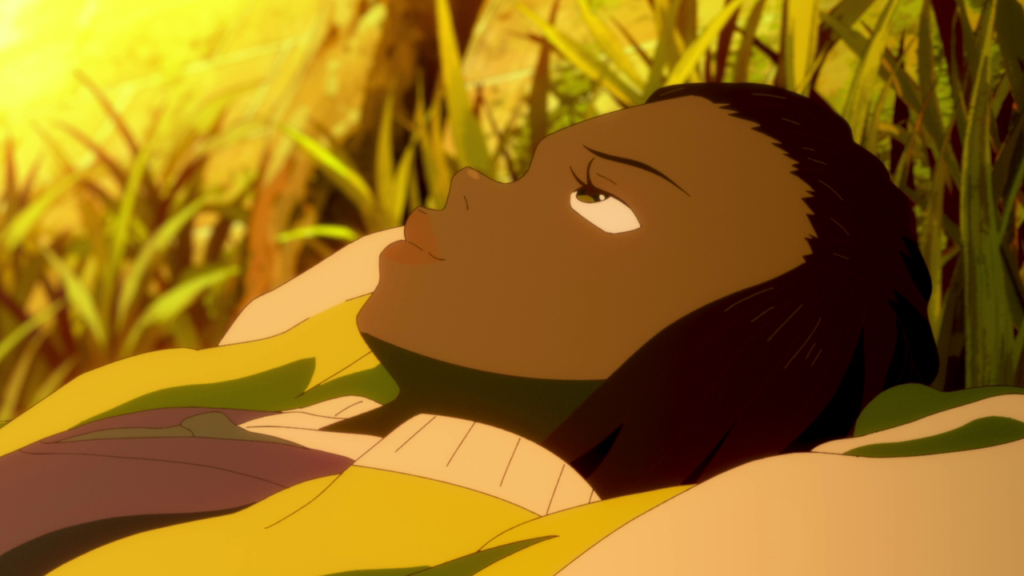 As it stands, Eizouken episode 10 marks the series’ very first misstep. That’s not a bad record considering how long the show has been running and how far we are into its production – in many cases, it’s only because of the exceedingly high bar that the series has set itself that this episode disappoints. Furthermore, the quality of the production is still absolutely on point – despite a clear drop in art quality this week (off-model characters are many), the team over at Science SARU more than make up for this with inventive camerawork and lifelike animation. The first five minutes alone move more than any episode of any other regular anime and had me transfixed the entire time. Eizouken episode 10 may be at a low ebb, but I’m sure that it will be right back up there in no time.

You can watch Keep Your Hands Off Eizouken! episode 10 via Crunchyroll.

Science SARU via Crunchyroll
Keep Your Hands Off the Eizouken!ReviewScience SARU
Join Our Discussions on Discord
Join Now