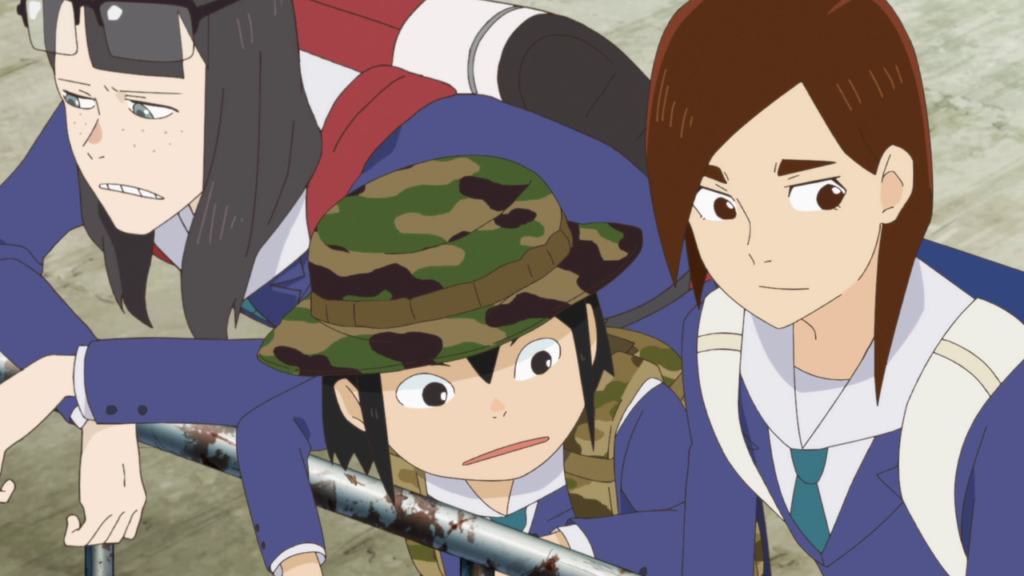 Midori, Kanamori, Tsubame and Doumeki deal with creative frustrations in a unique way in Eizouken episode 11 as the clock ticks ever closer to their deadline. An adventure to a hidden land also reveals secrets about our characters’ shared past, showing off a little more of their unique dispositions before that looming finale…

In terms of adaptation, this episode takes a very roundabout way through the rest of the original manga by Sumito Oowara that has yet to be covered before heading into this current arc’s finale. Starting off with chapter 22, it loops back to cover chapter 16, the original beginning to this entire arc, before then going forward to chapter 19, where we learn about Kanamori and Midori’s shared past. The results of this are surprisingly good, with only a few pitfalls triggered along the way.

Despite the inspiration provided last week, Midori is still struggling to come up with the perfect finale for the club’s latest short film. After struggling for a little while, a conversation with their errant club advisor Fujimoto-sensei provides them with just the space that they need to regroup and finally put the finishing touches on the short: a good old-fashioned adventure.

The message that Eizouken episode 11 provides, in this sense, is a very positive one. Part of the series’ overall aim is to shed at least a little bit of light on the creative process, and the act of coming away from your work for a while in the case of creative difficulties can be a vital one. Of course, that depends on the way that your brain works, but it’s a particularly important tactic for myself. One can only hope that any aspiring creatives watching the show will take this lesson to heart, because it’s a very useful one.

In terms of the actual adventure itself, it is interesting to note that this is adapted from chapter 16 of the original manga, because this is the way that the manga begins this entire arc, with Science SARU’s anime starting off with chapter 17 before going straight into chapters 20 and 21. It sounds very strange to say that the anime is essentially using the beginning for its end, but it works surprisingly well. The only thing that is missing is once again Doumeki, who appears at the very end but to little consequence. 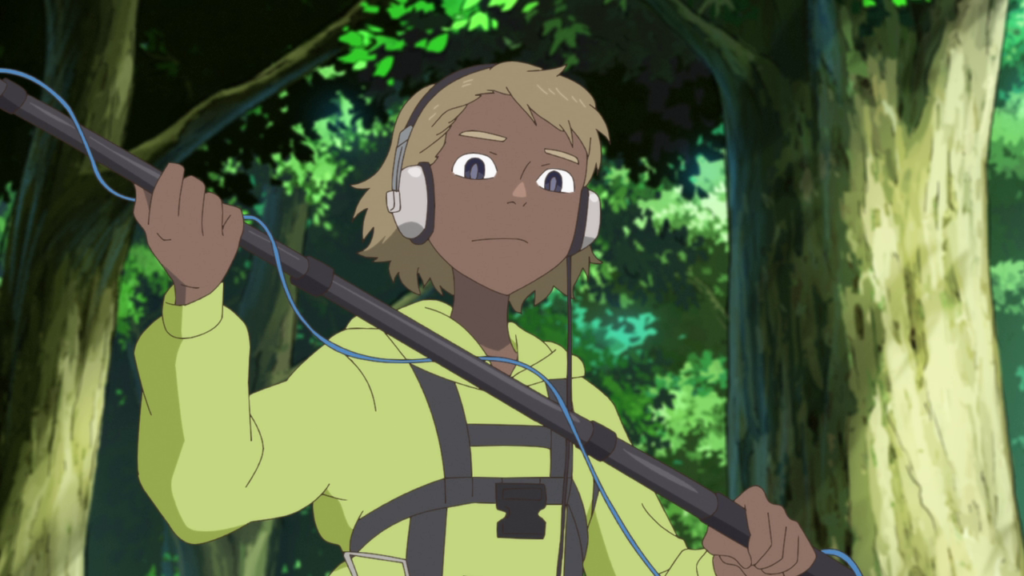 Doumeki’s inconsequential appearance is, in turn, conditioned by the structure of the original manga. The end of chapter 16 is her first appearance in the story as a whole and leads into her proper introduction in the following chapter, but the anime adapted this back in episode 6. This is, therefore, a sting that has no real meaning and can seem quite baffling as a result.

The studio’s decision to leave the source material as it is, in this sense, is even more baffling considering the fact that they have never shied away from changing the story up or inserting new elements, and Eizouken episode 11 is no exception: the entire beginning sequence with Midori and the Art Club is anime-original, and so is the scene with the vice principal and the rather unique-looking passers-by. Why not use some of this energy to make the source material work better in the context of the anime? We’ll never know.

More cracks start to show in the adaptation as Eizouken episode 11 moves from the A part to the B part, from adapting chapter 16 to chapter 19. There’s no insert scene between Doumeki’s brief appearance and Midori running to the clubhouse around the 10-minute mark, which makes the transition quite jarring. It’s a minor point, but one that serves to drag the quality of the episode down regardless.

What Science SARU does add, however, is the whole threat from the vice principal as to obtaining funds from outside of school to the issue of Kanamori being ill. In the manga, these two storylines are separated by a factor of three chapters, which gives the whole issue of Kanamori falling ill a more inconsequential feeling. Inserting the crisis, then, underlies the whole home visit with a more urgent tone.

Aside from finally showing off the finished idea for the short film, what this second part of Eizouken episode 11 also shows off is how Midori and Kanamori met for the first time. If you cast your mind back to episode 1, you’ll recall that their relationship was never exactly friendly, and this is because their friendship, as it turns, only came about in the first place out of necessity. Simply put, they were both loners and needed someone to pally around with. Thus, instead of friendship, they call it ‘co-existence.’ 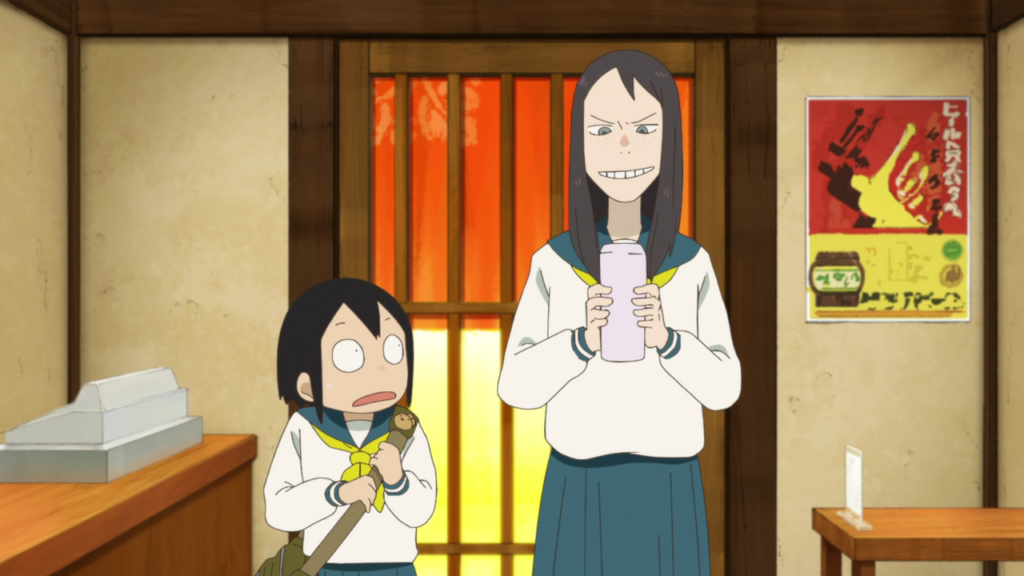 This underscores the unique disposition of both characters, who’ve never exactly been normal, and their exchanges in Eizouken episode 11 reveal, in turn, how engaging and well-written they are: there’s not much action in the flashback, but the entertaining dialogue that stems from their unique characters was more than enough to keep me transfixed. To be honest, I think that I could watch these characters do anything and be quite entertained, which shows how strong they truly are.

Nevertheless, the B part is also important in spelling out the core idea of the episode: co-existence. Just like Kanamori and Midori only became friends out of necessity, so too did the club come together out of necessity of a creative kind. Does that devalue their friendship? Not at all. Humans are a social species; everyone needs comrades. Furthermore, the idea of ‘co-existence’ provides the final push that Midori needs to finish the concept for the club’s latest short film, devising a story that talks about the need for communication and mutual understanding. Then, at the very end of Eizouken episode 11, the finishing touches are completed. We really are in the endgame now.

Yet, if the sting at the very end is anything to go by, then this finale isn’t exactly going to go off without a hitch. Just as the composer has sent the team some completely inappropriate music, I’m sure that there will be even more new challenges to overcome next week. So, while ot may be the last episode, I’m sure that Science SARU is planning to go out with a bang.

Perhaps I’ll save my thoughts for the series as a whole for next week’s review, but for now, I’ll just say that watching Keep Your Hands Off Eizouken! come to life in the form of an anime has been a magical experience. It has brought me even closer to these characters and the creative process than in the past, which is what causes me to look over any small missteps made by the series along the way – with Eizouken episode 11 being no exception. Even so, I would be lying if I said that I didn’t have high hopes for the finale. Roll on next week!

You can watch Keep Your Hands Off Eizouken! Episode 11 via Crunchyroll.

Science SARU via Crunchyroll
Keep Your Hands Off the Eizouken!ReviewScience SARU
Join Our Discussions on Discord
Join Now