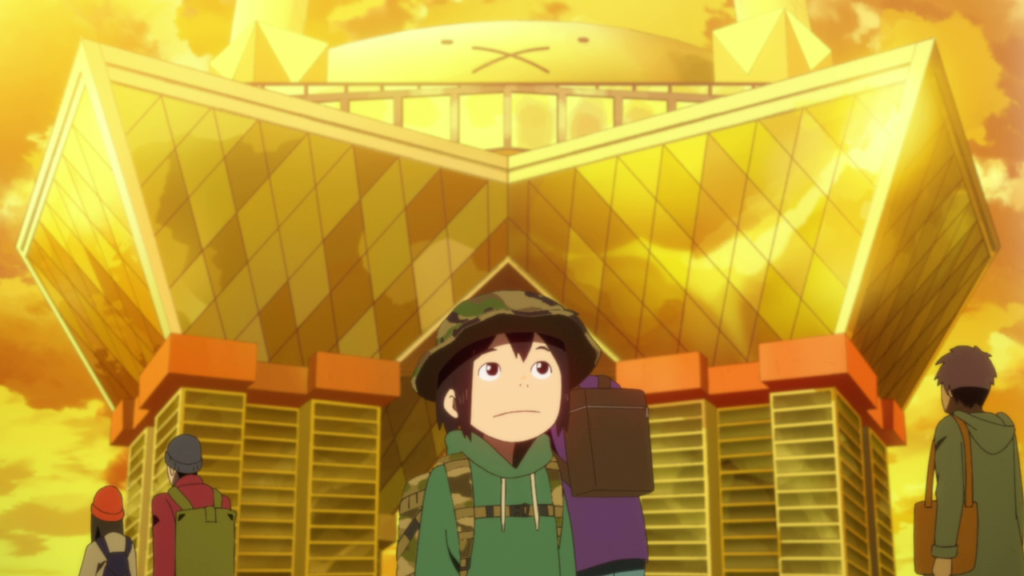 There’s one last hurdle to overcome in Keep Your Hands Off Eizouken! episode 12 as Midori, Tsubame, Kanamori, and Doumeki deal with the musical mishap that dropped like a bomb at the end of last week’s episode. Can they turn things around fast enough to make it in time for the Comet A doujinshi festival?

In terms of adaptation, this episode runs with the various anime-original elements introduced over the course of this arc, prefacing chapter 23 of the original manga with a new beginning section and expanding upon the Comet A setting. There’s also an original ending that serves to bookend the first season of the show (I’m still convinced that season two is a strong possibility) but doesn’t do much to distract from this finisher’s middling nature.

After the cliffhanger at the end of last week’s episode, all eyes were on the Eizouken. Having received completely mismatched music for their latest short film, how were they going to make it work in time for Comet A?

In typical fashion, in Eizouken episode 12 they decide to push through with sheer brute force. Tsubame and Midori immediately get to work on a new ending and make what they’ve already produced fit with the music in a single night, while Kanamori pulls some strings to make sure that they can still print enough DVDs to sell at Comet A.

But perhaps the time limit affected Science SARU, too, because there are several things within this anime-original drama that serve to drag it down. First of all, this isn’t exactly something new – the Eizouken already powered through something to completion in a single night in the first arc, which doesn’t make this sequence particularly exciting. Furthermore, several questions remain. How did Kanamori manage to get the DVDs printed after pulling out of their initial deal? What’s the timeframe between completing the short and participating in Comet A?

Little things such as this drag the beginning sequence down, which is unfortunate given that this portion of Eizouken episode 12 contains some excellent production value. Everything from the way that the characters move and express their emotions to the bombastic sequence where Midori is sailing through a sea of words is fantastic and shows how well the studio has planned and executed this production. Needless to say, a lesser studio probably would’ve dropped the ball by now, twelve episodes in. 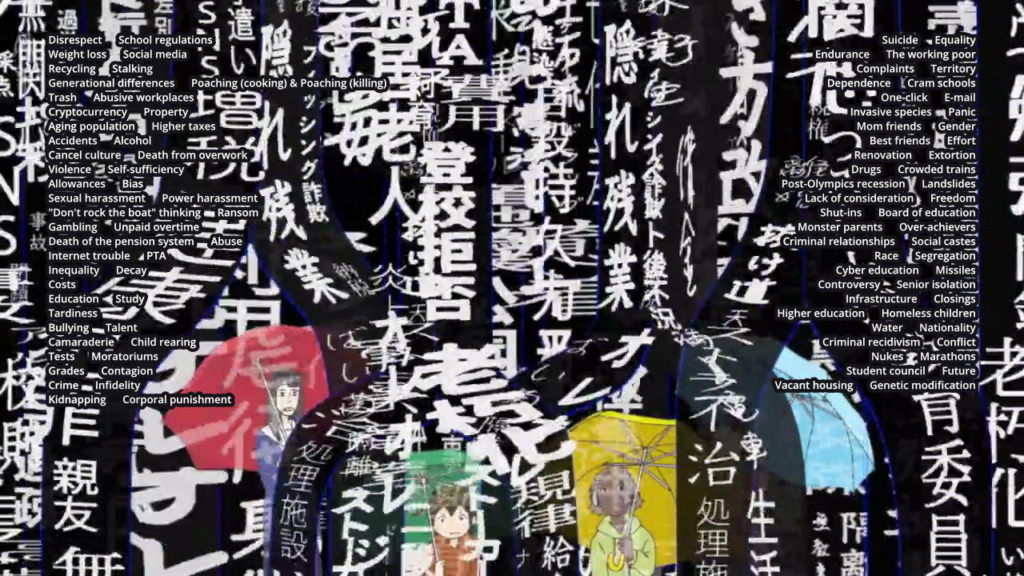 When the new short is finally done against all odds, Eizouken episode 12 then moves into the Comet A doujinshi fair proper. Here, we get to the core emotional beat of the episode. Midori isn’t entirely impressed with the doujinshi fair environment, unable to get into the spirit of things. Even when Kanamori spices things up a little bit through a little bit of ‘stagecraft’ – putting paper bags on their heads to draw passer-bys’ attention – she’s nonplussed. Her creative spirit just doesn’t gel with the commercial side of things, which is something that will become essential for the anime-original ending.

Speaking of anime-original content, there are several elements inserted into the Comet A scene that serve to spice up the material just a little bit. We get a better look at the different vendors participating in the event, such as the Robot Club, as well as the different people that are in attendance, such as Fujimoto-sensei. There’s also the hilarious scene where two girls ask one vendor how long it took them to make a certain blanket, to which they reply “Eight years.” The execution and delivery of this moment are absolutely perfect and had me laughing immediately upon my first viewing.

Once Comet A is done and dusted, what’s left in Eizouken episode 12 is to actually watch the completed short alongside all of the members. Well, I say all, but Doumeki isn’t present. At least her absence is explained this time by Kanamori but feeds back into the problem of her inclusion and exclusion. Perhaps it’s impossible to strike a perfect balance.

In any case, the club’s latest short – called Shibahama UFO Wars – is without a doubt their most ambitious yet. Not only does it boast a proper story and a long list of collaborators, it also manages to come together remarkably well given all of the production troubles. The quality of Midori’s setting, too, shines through as the environment shifts and shapes along with the dynamic action. Certainly, no one can deny that the girls have talent.

Nevertheless, there are some problems with the short film that serve to rob it of its swansong-like potential. First of all, the addition of arrows during the exposition sequence is quite baffling. This non-diegetic element sticks out like a sore thumb and pulls the viewer immediately out of the experience. Another, more subtle way of conveying the information should have been found or the information itself simplified so that it would not need visual aids. Furthermore, the idea of having two near-identical, parallel narratives is a good one, but ends up leading to a lot of repetition and adversely affecting the pacing. I hope that they can accept constructive criticism. 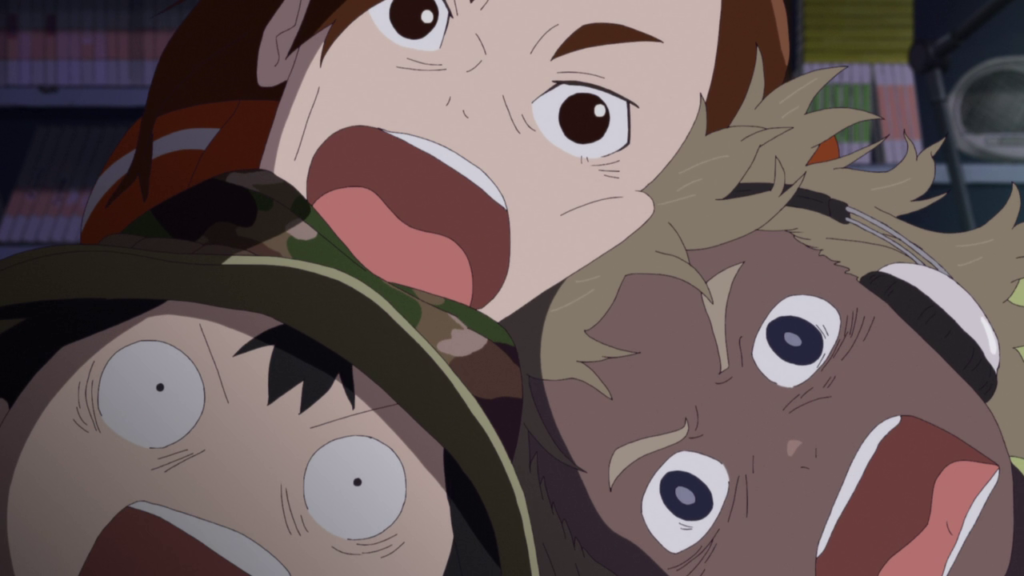 Perhaps those faults are, however, part of the charm. The whole point of the Eizouken, and indeed the entire show, is that these girls are not professionals – they’re somehow making it work with limited resources and constant pushback from authority figures, so perhaps all we should be doing is marveling at the fact that they managed to put together something at all. Still, I can’t turn my critical brain off.

In any case, Midori’s mini-character arc provides the ammunition for the show to go out on a high note. Having watched the complete short with her friends and promptly falling asleep, she wakes up the next morning and stares out the window with vigor. The camera pans out, revealing first the city of Shibahama, then Japan and finally the world with cameos from the club’s previous creations along the way. What this seems to say is that, for Midori, it’s more about creative expression and finding new frontiers than it is material gain or popularity. For someone like her, the buck never stops – and neither will it for the Eizouken, whose world will keep on spinning even though we will no longer be there to see it.

And there we have it. That was Keep Your Hands Off Eizouken!. Putting all of my thoughts into writing is quite difficult, so by way of a conclusion, I’ll stick to two questions: was Science SARU’s adaptation successful, and was this finale a good send-off for the series?

With regard to the first question, I think it would be hard to argue the opposite. Certainly, from a critical and commercial point of view, the show has made a huge impact and garnered a large amount of attention. This was not undeserved, as when Science SARU did step up to the plate, they did so with flying colors – hence why am I willing to forgive many of the mistakes made along the way, such as the adaptation’s treatment of Doumeki.

Yet, as a finale, Eizouken episode 12 leaves me decisively mixed. Seeing the fruits of the club’s labor is always satisfying, but I couldn’t help but feel like I had seen it all before. The way that some of the anime-original content was also lacking had me wishing that the studio had just stuck to the structure of the original manga, if only for the sake of consistency.

Nevertheless, there will be plenty of opportunities to make up for past mistakes. Not only is there a live-action film and drama adaptation on the way, but there’s always the possibility of a season two sometime in the far future. As of the time of writing, the anime has only adapted three volumes out of a currently available five, which means that the material is perfectly poised for a continuation in about a year or so. Given the success of Eizouken on both an international and national level, further, it would be folly for Science SARU not to at least consider doing so.

But, in the meantime, this is all we’ve got. Am I happy with it? More or less.

You can watch Keep Your Hands Off Eizouken! episode 12 via Crunchyroll.