Keep Your Hands Off Eizouken! Episode 2 Review: Up, Up and Away 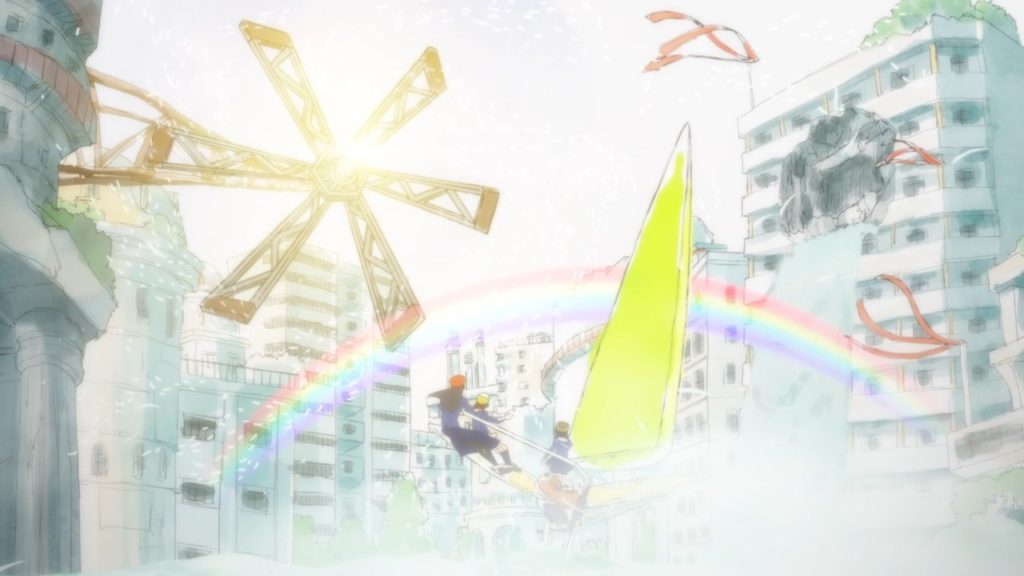 After a great first episode, Keep Your Hands Off Eizouken! episode 2 keeps its foot firmly on the gas pedal and plunges forward to the establishment of the titular Eizouken, or Film Club. The three girls manage to nab themselves a supervisor in the form of the irresponsible Mr. Fujimoto, a meeting space in the form of a ramshackle clubhouse, and even some equipment that will allow them to make their first collective foray into animation. Things are well and truly on the up.

In terms of adaptation and structure, this episode largely follows chapters 3 and 4 of the original manga by Sumito Oowara but makes several changes along the way. Most of these aim to make the material work better in the format of an anime episode, such as saving the end of chapter 3 – where the video of Midori falling through the railing makes it way onto TV – until the end of the episode and changing the location of the beginning of chapter 4 – where the girls plan their first production meeting – to the train station at the end of the day. Both of these serve to establish a more consistent temporal throughline between the A and B part of the episode, something which the manga never had to worry about.

The Process of Animation

There’s also the wholesale addition of a scene in the windmill storage house which sees Tsubame explain the function of a camera stand, which doesn’t have any structural purpose but greatly aids Eizouken episode 2 in one of its key aims: explaining to the viewer the finer points of animation.

Now that the Eizouken proper is up and running – perhaps the most important narrative aim of this episode – you should expect to see a lot of this going forward. The original manga contains lots of sequences about the process of creating animation and is, after all, based on author Sumito Oowara’s own experiences as a self-taught animator.

Even so, the way that Science SARU has approached these informative sections in adaptation in this episode fills me with hope. Back when I read the original manga, I was intrigued and even enthused by Oowara’s detailed explanations, but couldn’t help but think that they’d work much better in animated form. After all, it’s hard to describe something that relies so heavily on movement in a medium composed of static images. 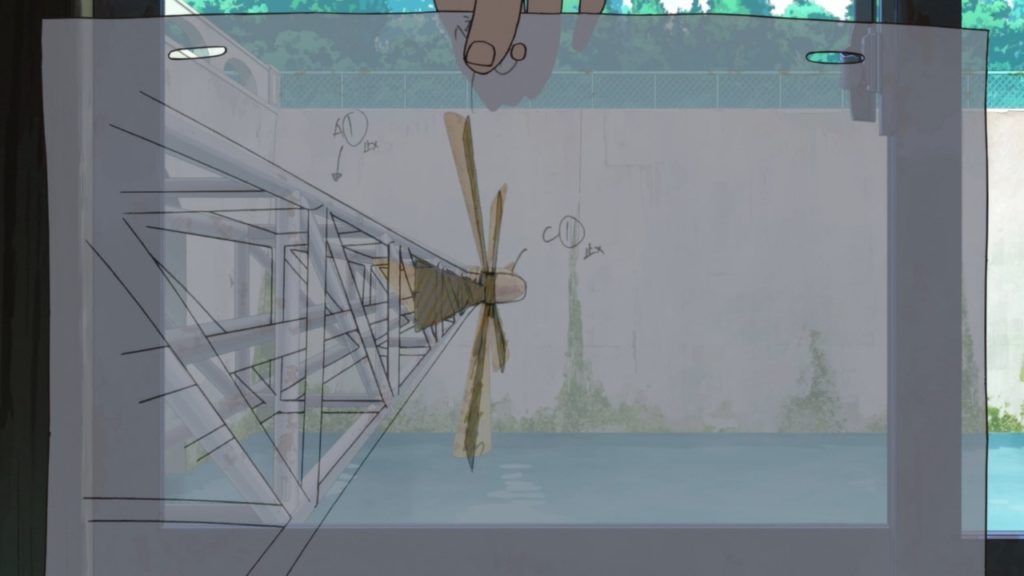 In this sense, the addition of movement to several sequences in Eizouken episode 2 does wonders for its educational content. Actually being able to see the addition of swirling lines and scattered debris to represent the blowing of wind in real-time when Midori is explaining why she’s dissatisfied with the windmill animation gets across her point wonderfully well. Furthermore, actually seeing the girls operate the camera stand – although this is an anime-original sequence – helps us understand its function and purpose much better. As a result, we become more interested in the content of the episode and, indeed, the whimsies of our characters.

Science SARU has also utilized the animated medium to its fullest potential in adapting one of the manga’s most troublesome elements: Midori’s spec sheets. We did see one of these appear already in episode 1, but this more or less as an eyecatch. In Eizouken episode 2, the studio actually incorporates some of the elements of Midori’s imagination into the sequences themselves, text pointing out the different types of fish that are floating about. 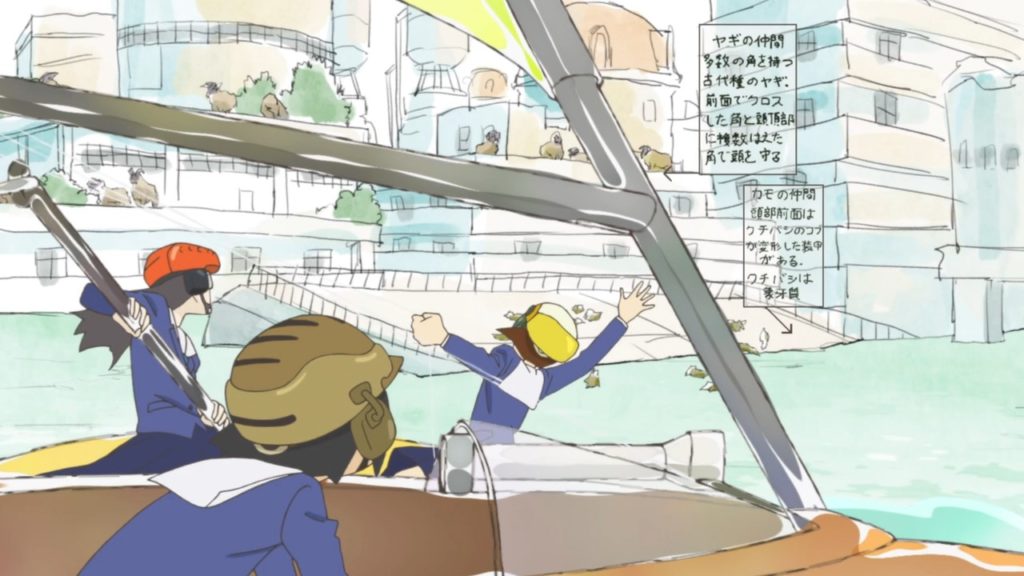 A lesser adaptation would’ve been more direct, so it’s clear from this that Science SARU are firmly engaged with the source material and committed to making it work in animation in the most efficient way possible. They truly are a match made in heaven.

But for all of Eizouken episode 2’s flourishes of educational adaptational brilliance, this episode would be nothing but a dry animation documentary without the characters there to save the day. In this sense, the main trio of Midori, Tsubame, and Kanamori are the heart and soul of this episode.

Even so, one of the trio in particular seems to dominate the proceedings this week: Kanamori. Western fans seem to have already fallen in love with Kanamori’s unique character design, but this episode acts as an endorsement for her unique, witty personality. The exchange with Tsubame where she comments on how long Kanamori’s legs are, only to bluntly reply that she ‘slept a lot’ is absolutely perfect, and her single-minded authority is on show during the scene where she threatens one of the faculty members to let them open the Eizouken. If you hadn’t fallen in love with Kanamori already, then this episode will surely do the trick. 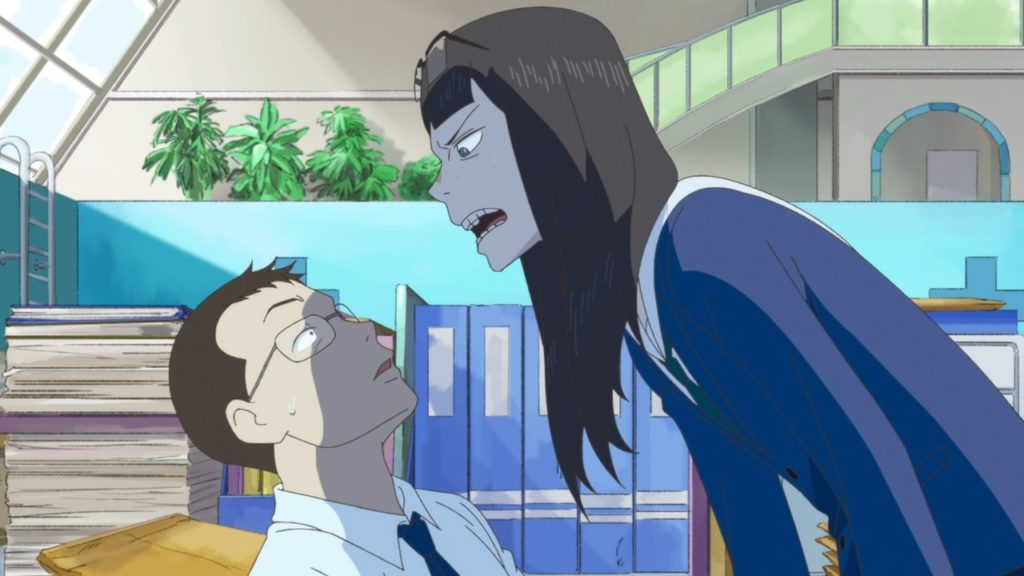 That’s not to say that the other three main characters don’t get a chance to shine. There are, after all, not one but two ‘imagination’ sequences that stem from Midori’s imagination, which follows the pattern of the original manga. Furthermore, Tsubame’s inadvertent flaunting of her family’s wealth – wrongly guessing the amount that Midori received at New Years, casually remarking that an expensive couch was just ‘in the way’ – is always hilarious and acts as very subtle character-building that the viewer might not even notice. Even so, if we accept that one of Eizouken episode 2’s immediate tasks was to set up the Eizouken and get the ball rolling, then Kanamori is undoubtedly in the driver’s seat this week.

If any character could be said to rival Kanamori’s impact on this episode, then it wouldn’t be from within the main trio. Rather, the introduction of the club’s supervisor, Mr. Fujimoto, certainly makes an impression: not just by virtue of his magnificent beard, but also because of his apparent carelessness that makes him think that it’s okay to leave a bunch of high school girls to use a disintegrating corrugated shed as a clubhouse. Some responsible adult he is. 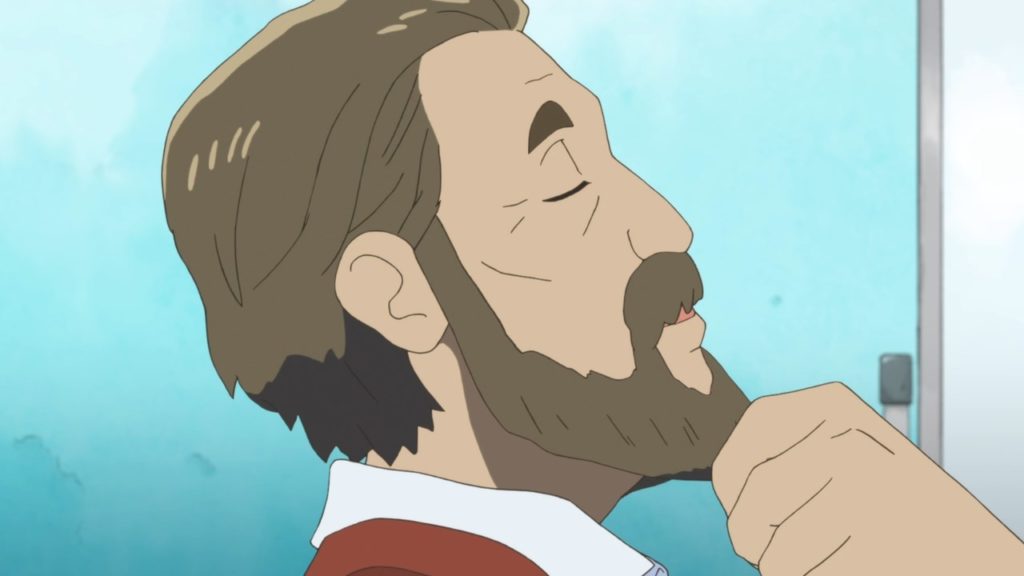 Finally, there are so many other little touches here and there that Science SARU brings to the table that make this episode so compelling: the camerawork, the environment design, the sound effects… listing all of them here would be tiresome, but suffice to say that Masaaki Yuasa and his team are doing a stellar job. Roll on next week!

You can watch Keep Your Hands Off Eizouken! episode 2 via Crunchyroll.

Science SARU via Crunchyroll
Keep Your Hands Off the Eizouken!Masaaki YuasaReviewScience SARUSumito Oowara
Join Our Discussions on Discord
Join Now