Keep Your Hands Off Eizouken! Episode 5: We Have Liftoff 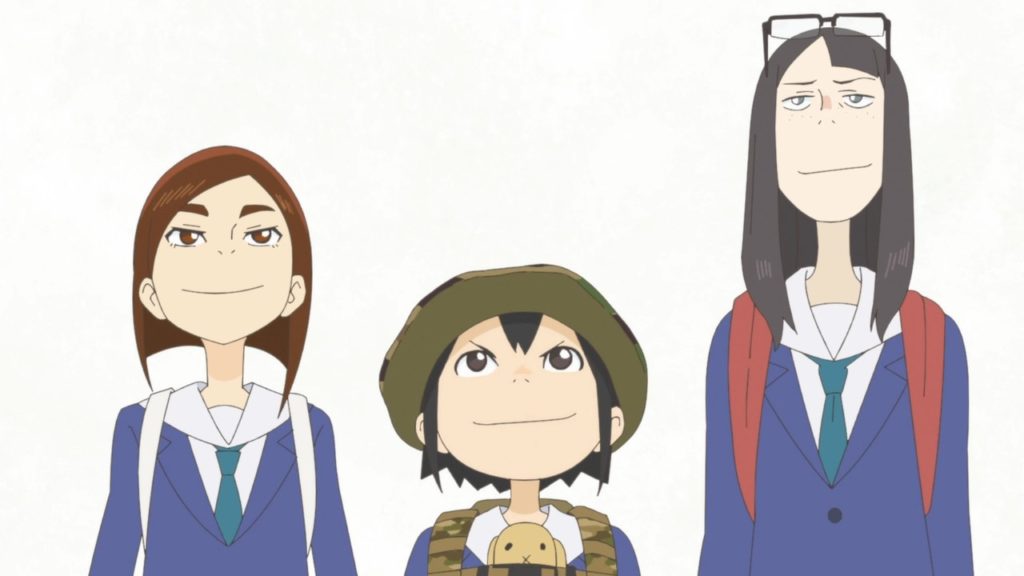 Having made a splash and won the favor of the student council in last week’s episode, Keep Your Hands Off Eizouken! episode 5 sees the main trio take on a new challenge: create a giant robot anime, commissioned by the Robot Club. But differing visions and shaky foundations threaten to trip them up along the way – can they rise to the challenge?

In terms of adaptation, this episode follows chapters 8 through 10 of the original manga by Sumito Oowara in a relatively faithful manner. There are some changes, as we’ll see, but these are minor and don’t affect the episode in any major way. Nevertheless, the subtle touches that Masaaki Yuasa and the team over at Science SARU bring are worthy of praise, including one instance where they finally deliver on of the most unique aspects of the visual presentation of the original manga.

If the function of Keep Your Hands Off Eizouken! is, at least in part, to showcase different aspects of anime production in a fun and lighthearted manner, then episode 5 is no exception. Along with last week’s crunch time desperation and, the week before that, the struggle to keep a team on track, Eizouken episode 5 introduces the trio to a new form of a challenge: pleasing a client.

The client in question is the Robot Club, who commission the Motion Picture Research Club to create a short film based on one of their creations for the upcoming cultural festival. We’ll get into the consequences of that a little later on, but safe to say that the creative visions on both sides of the table don’t quite match up.

In any case, in order to please their new clients – who are revealed in an amusing sequence where Midori very much gets the wrong end of the stick – they head underground to employ yet another technique used by professional animators in their work: using real-life references. 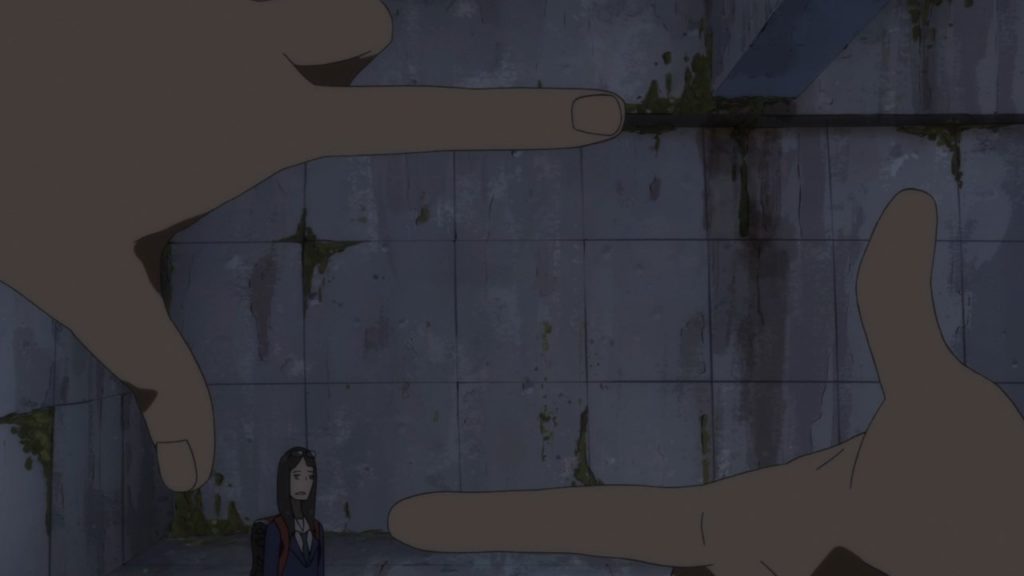 We already saw a little bit of this technique in previous episodes, especially when Tsubame used a video of herself swinging a machete as reference for her key animation, but Eizouken episode 5 dials things up a notch. Starting with Tsubame imaging one of the struts crumbling and falling to the ground, the trio then gets wrapped up in the idea of using the real-life setting of the cavern underneath the school as the stage for an intense battle between a giant, chainsaw-wielding robot and a giant kaiju crab.

Showing off this very real tool in the animator’s arsenal isn’t the only thing that this episode has going for it. Once again, the character dialogue and character work are on point, with several key moments serving as perfect encapsulations of a given character’s personality and the relationship between them.

The main ones that stood out to me were when Kanamori kicked down the rusted door (to which Tsubame remarks that she can “even put inanimate objects in their place”); the short exchange between Tsubame and Kanamori where the former asks the latter if she has cut her hair, to which she gives the curt reply “Yes.” before moving on to the business at hand; and the hilarious sequence where Midori manages to climb out of the hole that the trio fell into thanks to the numerous contraptions and tools that call her giant rucksack home. 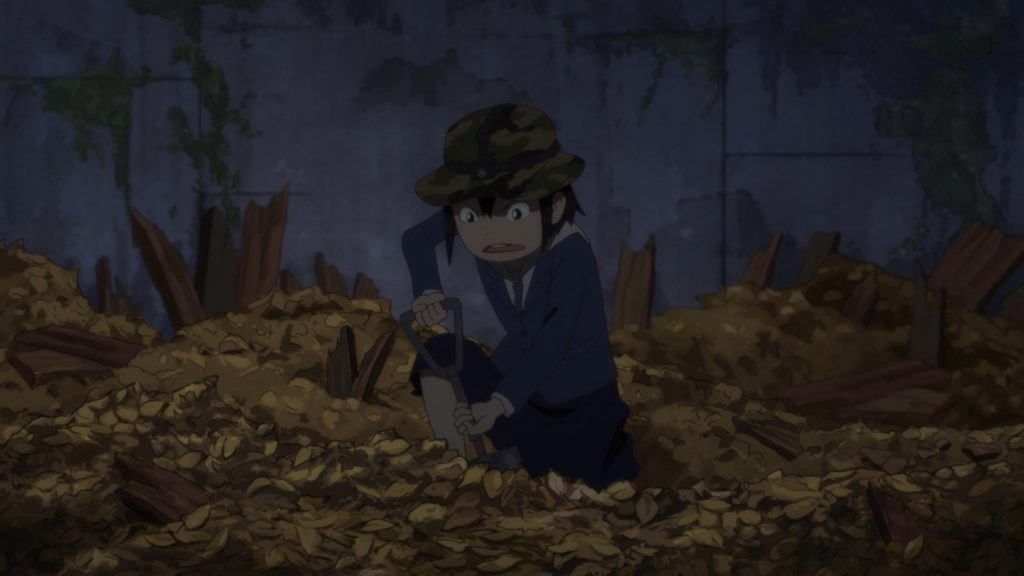 Science SARU’s production also helps kick things up a notch in this first part of Eizouken episode 5. The use of a dark color palette that suddenly passes into brightness once the trio enter the realm of imagination does wonders for the figurative and literal journey that they go upon, and the fluid animation in several action sequences – such as Midori accidentally getting hit with the robot’s “rocket’ and Tsubame with a plug while trying to run away – help to sell the comedy of such scenes and make the episode as a whole a joy to behold.

Furthermore, we finally get a sort-of adaptation of one of the most interesting elements of the visual presentation of the original manga: the offset and warped text that is meant to visualize how the characters’ dialogue would sound in different spaces. In the case of Eizouken episode 5, this comes when the characters are in the underground space doing location hunting, with their voices echoing in the vast empty cavern. 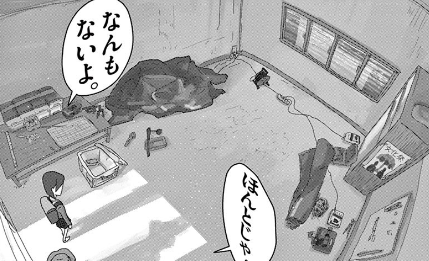 Why this unique element of the original manga has not been included up until this point is anyone’s guess – it appeared in the manga plenty of times before this – but it’s quite confusing when taken along with the numerous other things that were cut from this episode in favor of it, such as the subtle detail that Midori and Tsubame are wearing mecha pilot suits when they go to investigate the giant robot, which shows that they’re in their imagined world, and a scene with Kanamori at the very beginning that inserts a little bit of dramatic irony as to her involvement with the Robot Club for the reader. These changes don’t adversely affect the episode, however, and were only noticeable to me as someone who has read the original manga.

In any case, once the trio has finished coming up with the idea for their commissioned short film, they then have to present it to their customers – the Robot Club – in order to receive their funding. But, as mentioned, they’re not going to have an easy time of it.

It must be said that the premise for the second half of Eizouken episode 5 is remarkably similar to that of last week’s, but what sets this week apart is the central ‘antagonist’: Ono, a member of the Robot Club who’s perhaps a little too passionate about what he views as the ideal robot. 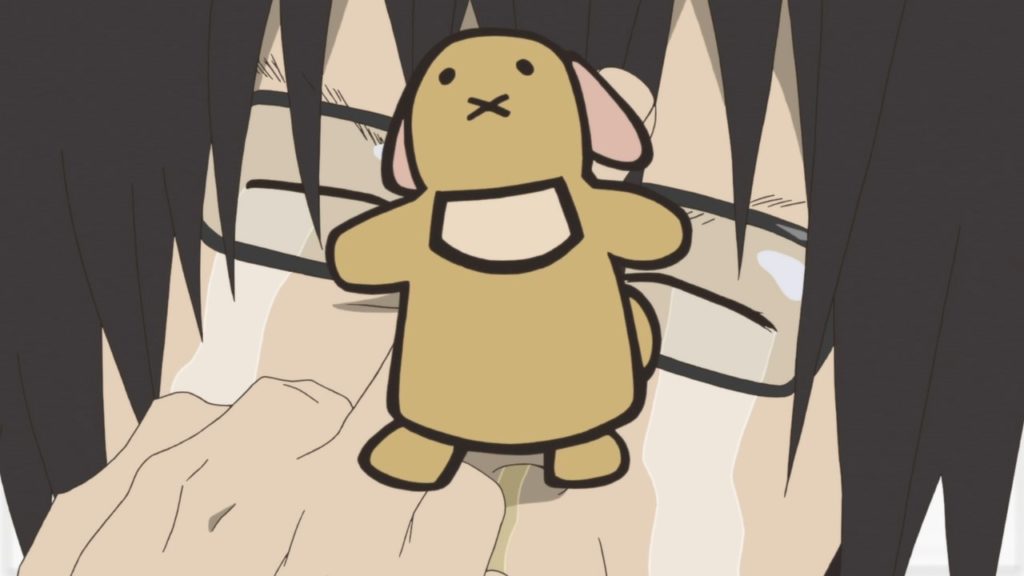 Ono was already a large part of what made this arc so compelling in the original manga, as his overblown passion is hilarious in a sort of self-deprecating way. There is, after all, not much difference between him, the Eizouken and the otaku reader – just that he stands in the way of our protagonists this time around. But much credit has to go to Yuuki Ono, who brings the character and his ravings to life in his excellent performance, building on his excellent work last season as Louis in BEASTARS.

The core similarities between the ‘antagonists’ and ‘protagonists’ of Eizouken episode 5 are, of course, on full display at the end, where Tsubame and Midori break down in tears alongside Ono in realizing that they’ll never fulfill their wildest dreams, such as going into space or doing a Hadoken. Indeed, this feeds into the theme of dreams vs. reality that has reared its head several times throughout the course of the series so far, but this week’s denouement is much more comedic than meditative in its overtones.

Finally, there are some interesting touches on the production side of things from Masaaki Yuasa and the team over at Science SARU that are worth highlighting. Thanks to the shaky camerawork, delicate mechanical animation, and human-made sound effects, you really feel the moment where the Eizouken’s giant robot stands up, after being altered in real-time thanks to the input of the Robot Club; its size and weight palpable. There’s also an interesting visual technique used in Eizouken episode 5 that we haven’t seen before – on-screen thought bubbles that take the text of the original manga and put it directly in the gaze of the viewer. 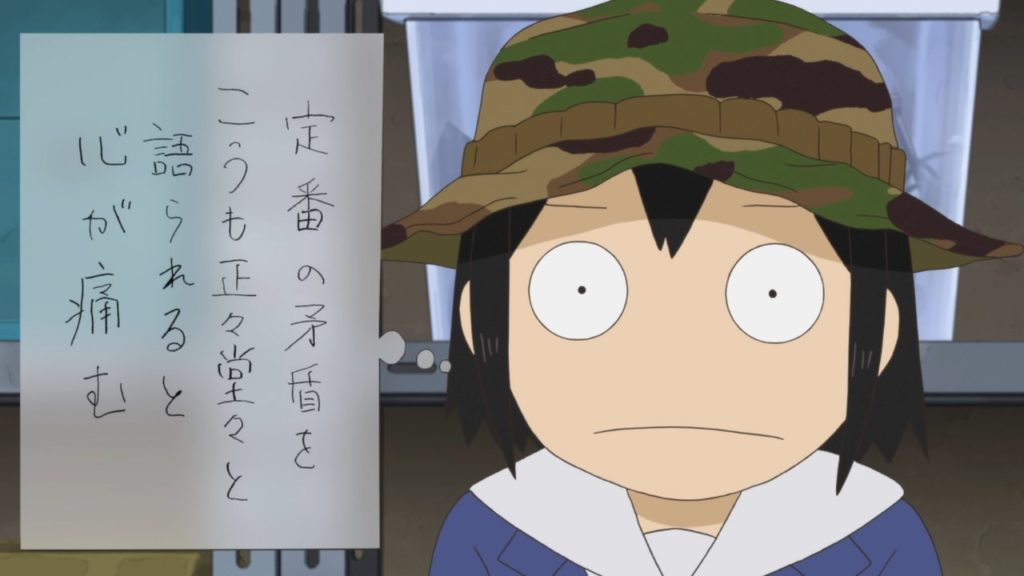 I’m of two minds with regards to this: on the one hand, it’s a pretty lazy way of adapting content from the original manga, but then again, it’s nice to see some of the detail included that would otherwise be lost along the way. Seeing how and if Science SARU uses this technique in the future will ultimately prove its worth, so we’ll just have to wait and see.

Eizouken Episode 5: We Have Liftoff

Overall, Eizouken episode 5 was another fantastic episode in what is shaping up to be an incredible adaptation. Science SARU’s production is excellent, its characters are charming and well-defined, and we’re even learning a little bit about the work of animation along the way. What’s not to like?

That being said, this week’s episode was definitely not as exciting as last week’s. Part of this is to be expected, as last week was the climax to an arc that let us see how all of the trio’s hard work paid off. Setting up a new arc is never easy, but then again, you can do a lot worse than Eizouken episode 5.

Heading into next week, it’ll be interesting to see how and if the series can match the highs of its previous narrative. For now, we have liftoff, but whether or not the series can make it to the moon once again, or end up as an Apollo 13, remains to be seen.

You can watch Keep Your Hands Off Eizouken! episode 5 via Crunchyroll.