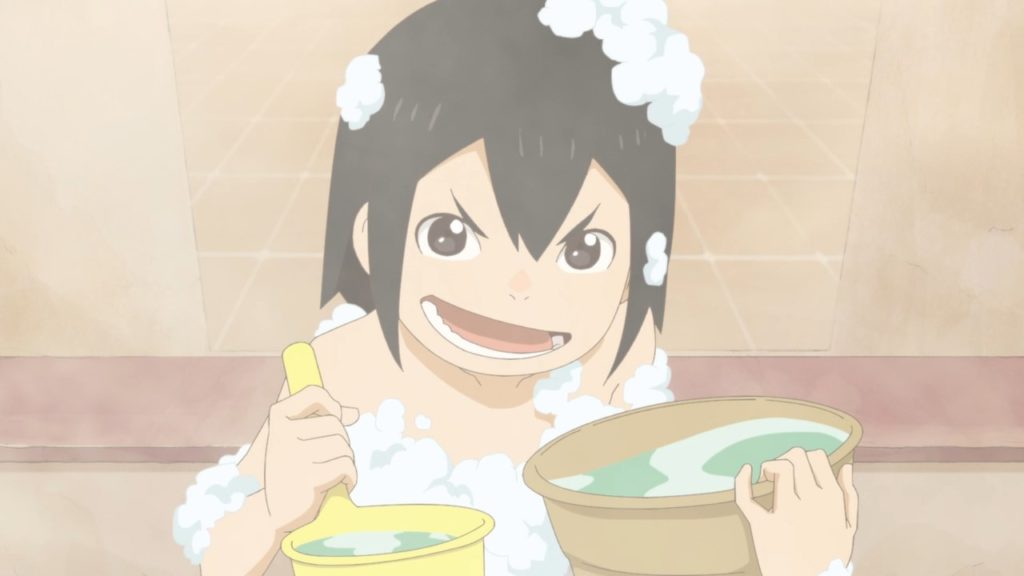 Our main trio – which is now a quartet – continue work on their upcoming short film for the Robot Club in Keep Your Hands Off Eizouken! episode 7, which keeps rolling the ball rolling with the surprising developments that came in last week’s episode. There’s room for a little respite, however, as they visit the local bathhouse in a scene that’s much more than simple fanservice. Furthermore, if last week’s episode was very Midori-centric in many respects, then this week’s is almost definitely all about Tsubame – a fact that is revealed and constantly emphasized throughout the episode with flashbacks and declarations.

In terms of adaptation, this episode is yet another surprisingly inventive adaptation. While introducing Doumeki much earlier on than in the original manga definitely makes last week’s episode still the most interesting in this respect, the anime-original content of this episode and it’s subtle but effective reorders make it more than worth analyzing.

As hinted, Eizouken episode 7 starts off with a very lengthy anime-original flashback sequence centered around Tsubame’s past which shows how she got obsessed with animation in the first place. While it’s worth noting that the beginning of this scene with Tsubame drawing in bed is actually taken from the beginning of chapter 12 – the next chapter that was up for adaptation – the realms that it goes on to move into make it much more into its own thing. We learn nothing about why Tsubame got obsessed with animation in the original manga, nor do we ever learn about a beloved grandma figure. These elements are a complete fabrication that act as some of Science SARU’s most drastic adaptational flourishes yet. 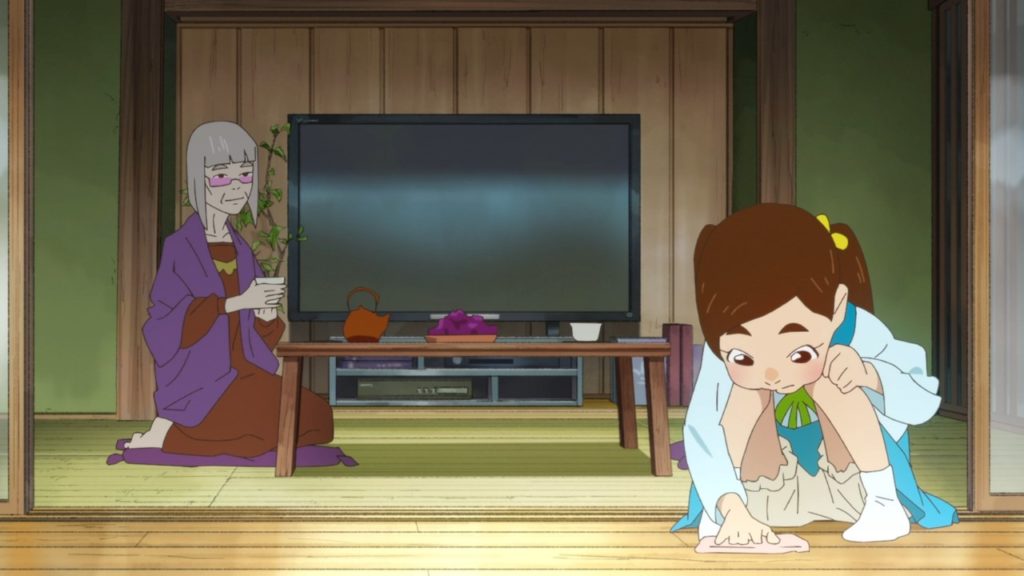 What makes these drastically anime-original elements work even better is how Science SARU and director Masaaki Yuasa have managed to make these non-canonical elements work in the canon narrative. The theme of movement dominates this entire episode and feeds into Tsubame’s work on the short film, as we’ll see later on. This sequence also offers us further insight into Tsubame’s tenuous family situation, which will become much more important later on. Furthermore, if you’re paying attention, then you’ll notice that Tsubame actually says that she’s a “grandma’s girl” after she and her friends visit the bathhouse – a line that is entirely fabricated but helps to link together the disparate parts of the episode in a clever way.

There’s absolutely nothing wrong with adding in anime-original content in an adaptation when it’s appropriate, and if all such sequences were as consistent in tone, character, and narrative as Science SARU’s Tsubame flashback sequence, then the world would be a better place for it. I’m sure anyone who’s struggled through anime-original content in a long-running shonen manga adaptation will agree with me on that point!

Speaking of adaptational flourishes, then we should also discuss Doumeki. The sound-obsessed fourth member of the Eizouken, who was introduced last week despite not appearing in the manga until much later on, plays a small but not insignificant role in Eizouken episode 7 as she works alongside the original trio of Kanamori, Midori, and Tsubame to put together some of the sound for their latest short. 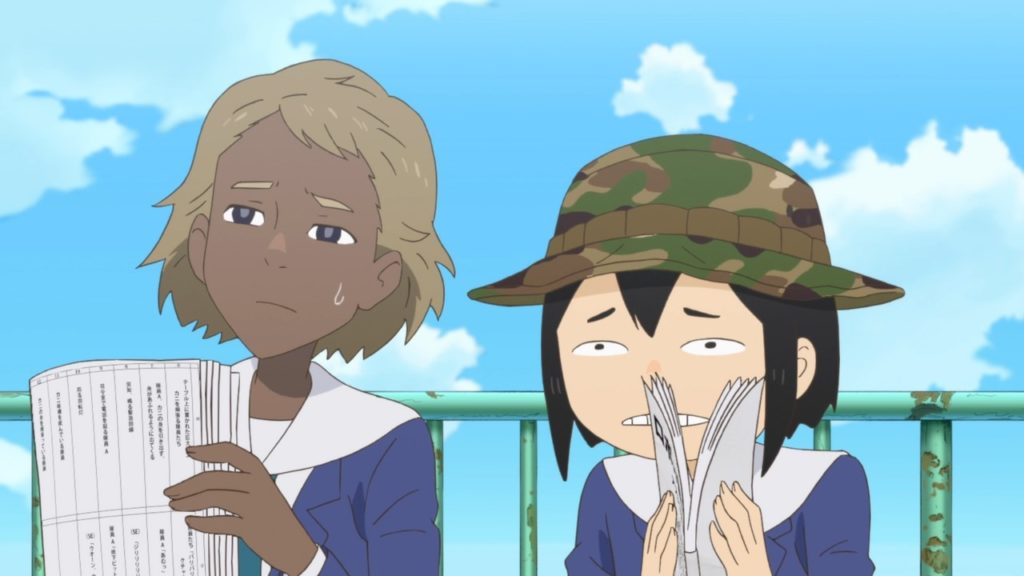 Her appearance in this week’s episode is important as it shows that Science SARU and director Masaaki Yuasa didn’t just bring her character in much earlier on just for laughs. Clearly, they intended to simply incorporate her character much earlier on. As to why the studio chose to do this I have no idea, but maybe it was because the series wouldn’t reach her introduction in a single cour. Or maybe Yuasa is a big fan. Either way, the scene where she works with the other Eizouken members to add sound effects to the animatics is another interesting anime-original addition.

Given the studio’s apparent insistence that Doumeki be considered the fourth member of the trio, her absence can’t help but be felt when Eizouken episode 7 gives our characters a brief moment of respite between back-breaking animation work in the local bathhouse. Why isn’t Doumeki hanging out with Kanamori, Midori, and Tsubame as one part of the Eizouken and its production team? In this sense Science SARU has written themselves into a bit of a hole: not incorporating her character into the story will make her absence felt while attempting to do so will only create more work for the team as a whole. In this sense, they’re damned if they do and damned if they don’t.

But if we ignore this problem for now, it must be said that this episode’s “imagination” sequence along the lines we’ve seen in previous episodes – such as episode 1’s fantastic aerial chase – is perhaps the best one yet. Oorutaichi’s music gives it a unique atmosphere and the abundance of Midori’s self-made sound effects – most likely provided by Sairi Itou herself – make it instantly endearing. What’s more, is that the unique configuration of the sequence’s setting – a multi-layered mechanical bathhouse that reminds of the one in Spirited Away – makes it a joy to see unfold and explore along with Midori. That’s not even mentioning the water fight, which shows off each of our characters’ personalities in a unique way.

If we return to the issue of Doumeki, however, then her exclusion from the bathhouse scene is even stranger considering how Science SARU and Masaaki Yuasa are able to thread in previous additions and anime-original elements to the narrative of Eizouken episode 7. The biggest example of this is the previously mentioned exchange where Tsubame talks about her anime-original grandma, but there’s also a scene that acts as the coda to the anime-original scene in last week’s episode that pitted Midori’s introversion against two inquisitive members of the Art Club. 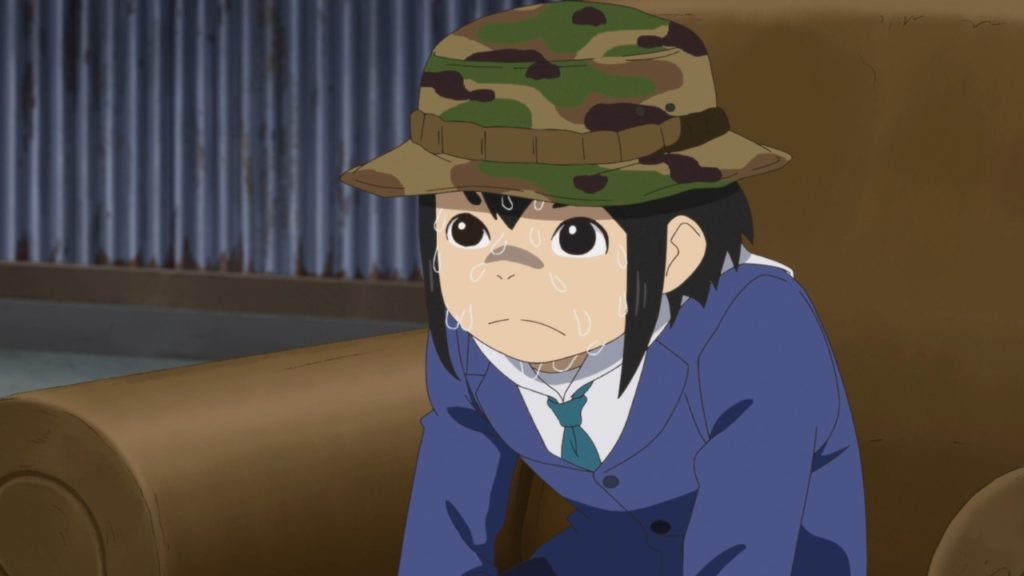 Unfortunately, Midori’s inability to communicate the complicated ideas that lie within her unique mind last week meant that the Art Club went away and produced several backgrounds that go against the specification, but it’s still an important learning experience for the young director. I don’t like to see my favorite character upset all that much, but in this case, it’s an important step in her character development.

Speaking of Midori, I think it’s safe to say that last week’s episode had a more-or-less consistent focus on the trials and tribulations of her character. Remember that the entire second part of the episode was all about finding out what exactly is her creative “switch,” and in this vein, you could say that Eizouken episode 7 is the Tsubame episode.

There are several reasons for this. As has been mentioned multiple times, there is a lengthy anime-original introduction to the episode that fills in some of the blanks in Tsubame’s past. This sets the tone for the entire episode, the end of which delivers the one-two-punch: an inspiring declaration of her ideals, what she strives for in her animation work by using the example of a rocket launch. It’s an uplifting end to the episode that acts as an encapsulation of her character as a whole. 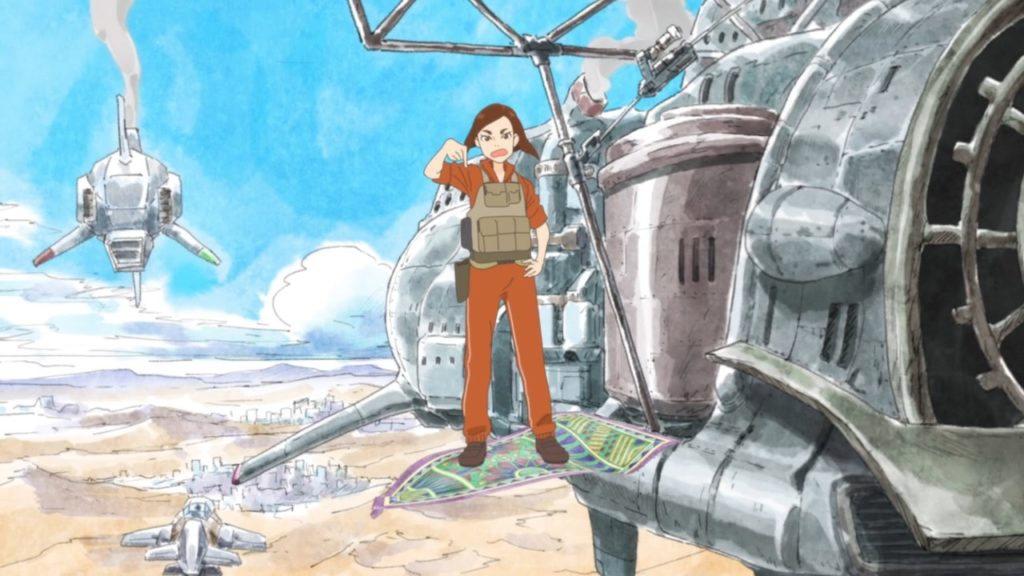 This sequence will also no doubt be a useful narrative touchstone for the series as it moves into the climax of the Robot Arc as well as the culmination of the various hints dropped about Tsubame’s less-than-satisfactory home life. I won’t say any more for fear of spoilers, but it’s safe to say that next week will be very interesting.

Well, I say next week, but that might not be the pace at which Science SARU and Masaaki Yuasa are planning to proceed with this adaptation. Previous weeks have already seen a slowdown, and several elements that were cut from this week’s episode may end up informing some larger anime-original sequences next week. But however the team choose to proceed, I have faith that they’ll continue with the well-engineered, squeaky clean adaptation.

You can watch Keep Your Hands Off Eizouken! episode 7 via Crunchyroll.

Science SARU via Crunchyroll
Keep Your Hands Off the Eizouken!Masaaki YuasaReviewScience SARU
Join Our Discussions on Discord
Join Now