It’s showtime in Keep Your Hands Off Eizouken! episode 8 as Midori, Kanamori, and Tsubame put the finishing touches on their short film and show it for everyone to see during the School Festival. Yet, trouble is afoot as Tsubame parents declare that they are going to attend, setting up a confrontation between the young charisma model and her anime-averse mother and father…

In terms of adaptation, this episode takes the content of a single chapter of the original manga – chapter 15 – and runs with it. While such an approach always raises concerns around pacing, Science SARU and director Masaaki Yuasa more than make up for this with a staggering amount of anime-original content which, in turn, harkens back to some of the studio’s best past work. Not only is this episode the most transformative since episode 6’s early introduction of Doumeki, but it’s also the best of the season so far.

Before the Eizouken can screen its latest short film, however, they need to do the finishing touches. The beginning of Eizouken episode 8 is largely dedicated to this, along with the set-up for the drama with Tsubame’s parents that will underpin the narrative of this entire episode.

Aside from just it’s narrative importance, this first part of Eizouken episode 8 is important as it provides us with what may very well be the last piece of educational content that this arc has to provide. Educating its readers on the finer points of animation production has always been one of the core aims of the original manga, and this has been captured wonderfully in animation by Science SARU in previous weeks. So it’s great to see yet another example of this as Midori and Doumeki work on the music for the short film in this beginning segment, exploring how the usage of music in different situations can affect the overall mood and atmosphere of the piece. Enjoy it while you can, because come next week an entirely new project will be coming the Eizouken’s way. 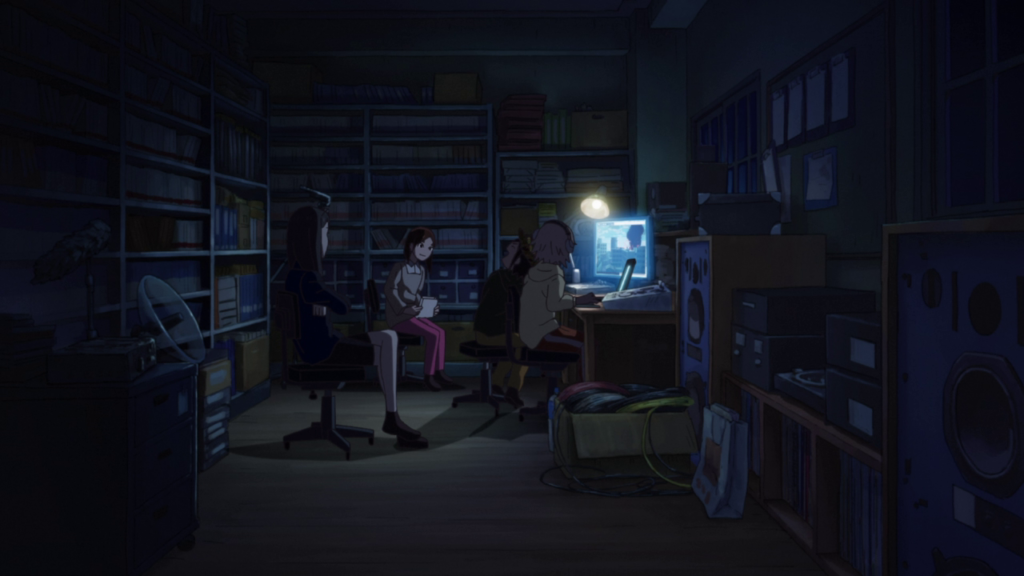 What’s also encouraging about this beginning segment is how Doumeki makes her presence felt from the very beginning and feels like a bigger part of the team as a result. One of the more disconcerting elements of last week’s episode was how Doumeki was missing from a big team-bonding session at the baths, so it’s good to see the studio making more a concerted effort from the very beginning this time around.

Given that Doumeki was introduced much earlier in the anime than in the manga, this also quite naturally means that this entire scene between Midori and Doumeki is anime-original. Get used to that, as Eizouken episode 8 is almost entirely anime-original, but what’s interesting is that this isn’t the only adaptational change that Science SARU makes in the opening segment of the episode. In fact, by inserting the scene with Doumeki at the very beginning, the studio ends up pushing the beginning of the original chapter (the scene where the original trio eat cup noodles outside) until much further in and reveals to us in a nice bit of dramatic irony that Tsubame’s parents will be attending the School Festival before our characters do.

Either way, the effect is the same. The conflict between Tsubame and her parents over her future has been brewing since the very beginning, so we’re immediately drawn intrigued as to how Eizouken episode 8 will play out. Plus, it’s a nice scene between the original trio that offers some peace and quiet before the madness of the School Festival to come, and there’s even an interesting bit of foreshadowing with regards to how Tsubame holds her chopsticks – the significance of which only becomes apparent at the very end. So, let’s gear up and dive head-first into the madness.

The Madness of the School Festival

Things start off calmly enough. Midori, Kanamori, and Tsubame are handing out flyers for the screening, but aren’t getting much of a response given the sheer number of clubs vying for the attendees’ attention. Even making it known that famous model Tsubame Mizusaki has dipped her toes into animation isn’t enough. What is to be done?

Luckily, the Robot Club arrives with a bombastic plan: launch bottle rockets with small pictures of Tsubame inside to capture the crowd’s attention, and thus starts the madness. The Security Club arrives on the scene and attempts to arrest the troublemaking Tsubame, but she manages to slip away disguised as a cardboard robot. What follows is a hilarious, action-packed sequence all about mistaken identities that goes far above and beyond the call of duty in terms of stretching out the content of the original manga. But this is Science SARU we’re talking about – the studio doesn’t tend to do half-measures. 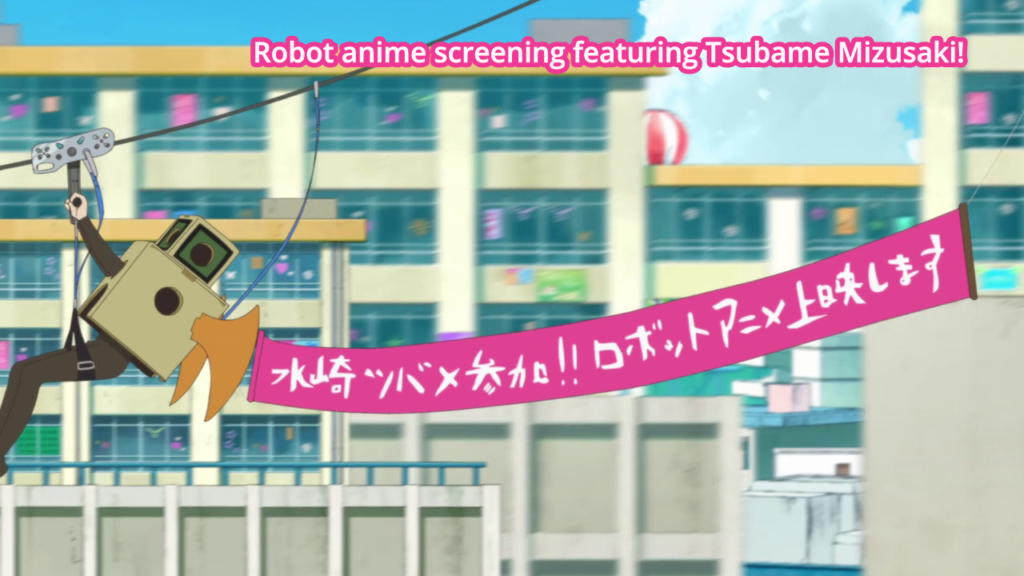 If it wasn’t already clear, then this entire sequence is anime-original, from the Robot Club’s bottle rockets to Ono’s glorious last stand. It also reminds me quite a lot of a very similar sequence in Night is Short, Walk on Girl, where the protagonist pursues his love interest through another school festival. Yet, if we were to break down what makes this sequence work so well at its core, then it’d have to be the Security Club. This anime-original antagonistic force forms the basis of the entire sequence by way of its pursuit of Tsubame, and what’s more is that this isn’t the only anime-original club that appears in Eizouken episode 8: there’s also the HVAC club, to whom Kanamori makes a terrifying visit and forces them to make the auditorium as pleasant of a temperature as possible through blackmail.

What all of this proves is how well Science SARU and Masaaki Yuasa have understood the core essence and appeal of the source material, so much so that they can create anime-original characters and storylines that mesh so well with the original. They’ve even understood some of its flaws: the extended madness of the School Festival actually draws attention to and makes use of Tsubame’s status as a fairly well-known ‘charisma model,’ something which never seems to have much of an impact on the story in the original manga. If all adaptations were as good as Eizouken episode 8, then the world would be a better place.

That being said, one of the ways that Tsubame’s celebrity status is felt in the original story is through her parents, who want her to become a famous actress befitting of her pedigree rather than an animator. So even if Eizouken episode 8 takes a hell of a long time to get there through all of its anime-original content, once Midori accidentally gives her parents a flyer for the screening and sets off in motion the inevitable conflict, the jury is out both in the manga and the anime as to how they will react. Could this be the end of Tsubame’s fledgling career as an animator?

Obviously not. There’s still three more volumes of manga left to adapt and they all have Tsubame on the cover, so you can make an educated guess. Still, even if you have no knowledge of the source material, I reckon that the inevitable conclusion is even more obvious in the anime. This comes down to their facial expressions, which are much less negative in the anime than they were in the manga, which hints at the fact that Tsubame’s parents are by no means united on the issue of Tsubame doing animation, nor was the decision to stop her from doing so necessarily taken in tandem with each other.

What’s interesting about this sequence, then, is how Tsubame manages to convince her parents to let her continue doing animation work. This imbues the screening of the club’s short film with emotional as well as visual spectacle; the animators over at Science SARU are once more doing fine work in bringing the static animation work of the original manga to life, but it’s honestly more satisfying to see the various ways in which Tsubame’s parents recognize the unique outlook of their talented daughter than simply appreciating the finished product. When we see her walk cycle, her rendition of tea being thrown and her odd way of holding chopsticks, we are right there along with her parents in thinking “This is who Tsubame really is.” This also ties into the previous episode’s focus on movement, which I think Zac Bertschy summed up very well over at Anime News Network.

The only thing I’d say that drags all of this down is the way that Science SARU has deemed it necessary to explain to us the thought process of Tsubame’s parents during the screening through dialogue. This does make sense given that we hear the diegetic sound of the auditorium as the audience gasps and cheers but feels like an unnecessarily overt move for what should’ve been communicated quite easily through the content of the short.

Eizouken Episode 8: The Best One Yet?

Even so, I can’t bash on Eizouken episode 8 too much. Not only is it a perfect emotional and thematic conclusion for Tsubame’s story arc, which has been running throughout the show since the very beginning, but it’s also a shining example of the very best that the art of adaptation can offer. All of Science SARU’s anime-original content adds so much to the overall spectacle of a finale that actually takes place over a single chapter and harkens back to some of the studio’s best previous work. So, I’d be hard-pressed to deny that Eizouken episode 8 isn’t the best one yet. Needless to say, heading into the next arc, the team have their work cut out for them.

You can watch Keep Your Hands Off Eizouken! episode 8 via Crunchyroll.

Science SARU via Crunchyroll
Keep Your Hands Off the Eizouken!Masaaki YuasaReviewScience SARUSumito Oowara
Join Our Discussions on Discord
Join Now