Just this spring or so, an entirely new line of Shin Megami Tensei: Nocturne merch materializing from thin air would have been pretty surprising. Of course, we’ve been in the ‘SMT Nocturne HD is happening’ Timeline for a couple months now so the idea of new SMT Nocturne merchandise isn’t as big a deal as it would have been, but we’re still happy to see these goodies from Empty go on sale. While English audiences won’t be getting their hands on the game until next Spring it comes to Japan on October 29, just over a month away from the time of writing. Here’s what you can buy to ease the passage of time until it actually drops. 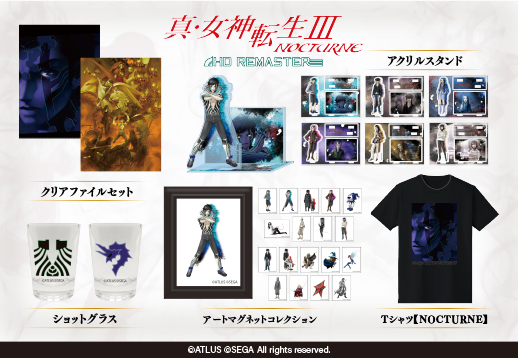 Admittedly we wish Empty provided its potential customers with some higher resolution images to work with, but we still have a pretty good idea of what their Nocturne merch line will look like. Almost entirely pulling from Kazuma Kaneko’s iconic illustration work on the game, it makes would be standard merch fare into some really appearing gets just thanks to the art.  Clear files, pop art displays, magnets, shot glasses, and a T-shirt that skirts by on how good the image is alone, while the designs aren’t inspirational it does all look pretty cool.

We’re happy to see Shin Megami Tensei 3: Nocturne Merch coming out, but we hope to see some more fashionable takes on the idea in the coming months. Kazuma Kaneko is nothing short of genius and that early 2000s stern style of his could be put to great use in the hands of the right designer.  Of course we’re almost forgetting that Noctune HD is just the appetizer to the long-awaited Shin Megami Tensei: V that’s sure to get even more fanfare, collabs, and general attention is thrown its way when it comes out next year.

Shin Megami Tensei: Nocturne HD comes out in Japan next month, and in the spring elsewhere.