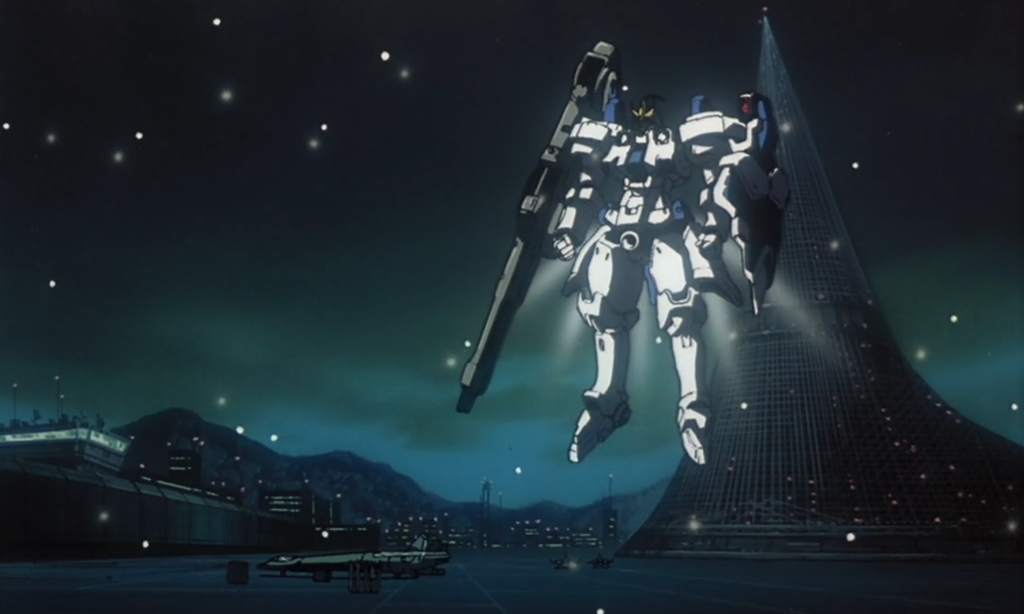 Seeing Akihabara’s Gundam Cafe plastered over in not just your layman’s Christmas decoration but specifically Gundam Wing themed Christmas decor, bubbled joy into my soul all weekend long. Heero Yuy in a darn Santa suit, Wu Fei with antlers, the other Wing boys donned in gay apparel. Looking at this small poster I bought at that scrumptious nerd haven still has me cackling in delight! It took me several minutes of publically exasperating ‘oh my god, why is it A Gundam Wing Christmas over here’, much to the dismay of those around me, to remember a perfectly good reason exists: Gundam Wing Endless Waltz, the high budget OVA recut into a film sequel to the TV series, is by some stretch of the imagination a Christmas film! Being nearly a decade since I last watched this Toonami-core classic, I can confidently say Endless Waltz is the premier cut of yuletide cinema with mechs. 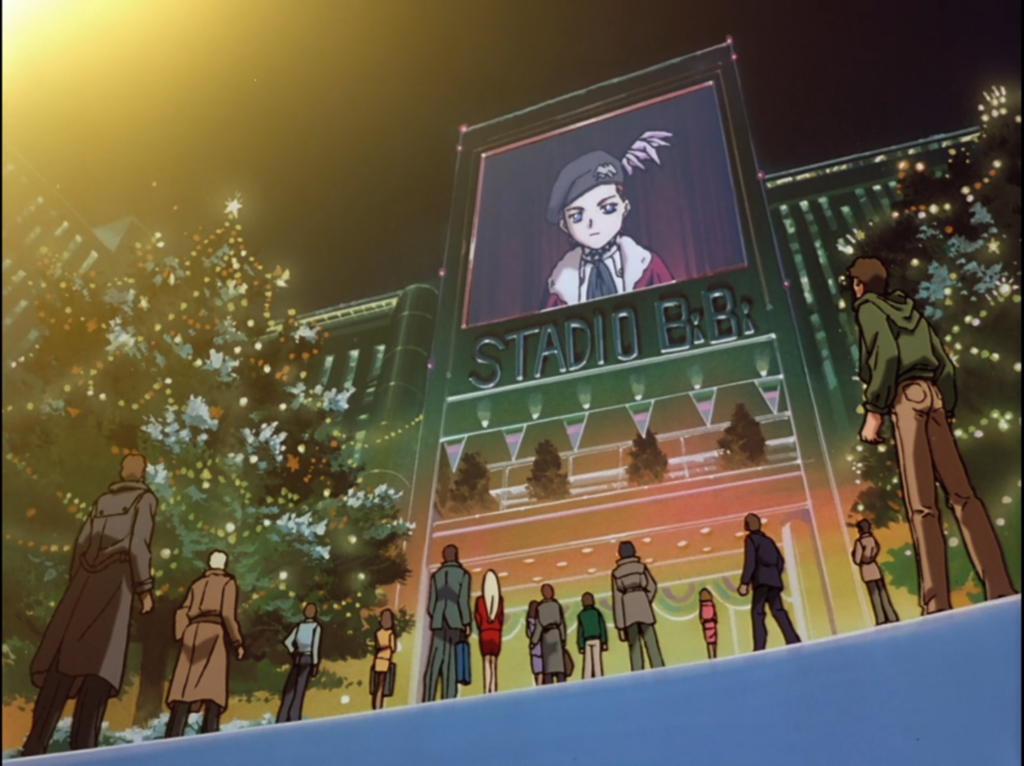 Gundam Wing Endless Waltz isn’t necessarily good or notable for being a Christmas movie; it just happens to all those descriptive words simultaneously. An entire generation of anime fans would remember when Gundam Wing aired after Dragon Ball Z on Toonami after school, said broadcast acting as the west’s introduction to this billion-dollar franchise. While Cartoon Network wouldn’t get it on their airwaves till the year 2000, it actually came out in Japan five years earlier. The second Alternative Universe Gundam series (meaning its not part of the original’s continuity like Unicorn) it vaguely reimagined the original series to mixed reception upon release. That didn’t stop Sunrise from pumping out an OVA sequel a year later, one the Toonami Generation would love. 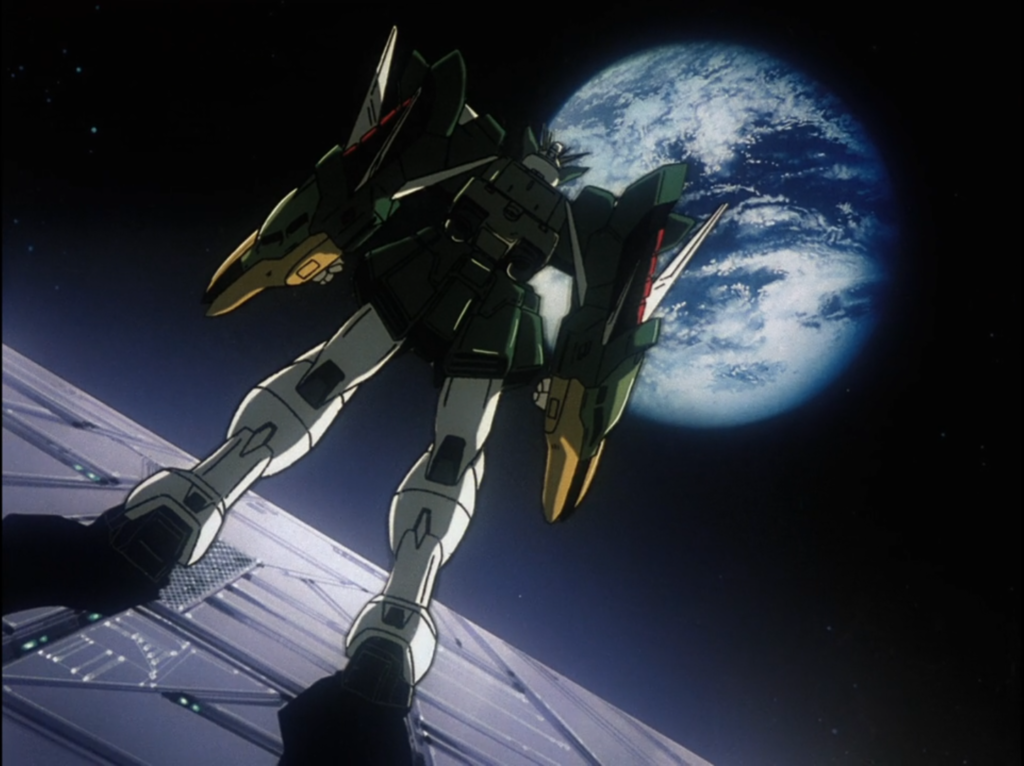 You might not be able to see the Christmas illumination from space, but know all over that swirling mass Wu Fei overlooked in his Altron Gundam Santa was out for delivery. Endless Waltz starts one snowy Christmas Eve and takes place over the course of the entire evening. Just miles above the reindeer delivery roots, Gundams are duking it out, as a rebel group lead by a brainwashed child attempts to drop a meteor on a civilian colony. No, that’s not a Christmas tradition for most, but it’s a Gundam staple to be sure. Beautiful shots of robots dancing, prancing, and bashing in the snow, rendered by Sunrise during their late 90s peak stretch of quality animation, belting out all-timers like Cowboy Bebop and The Vision of Escaflowne like carols, imbue an authentic winter atmosphere to the piece, though you couldn’t call it jolly. 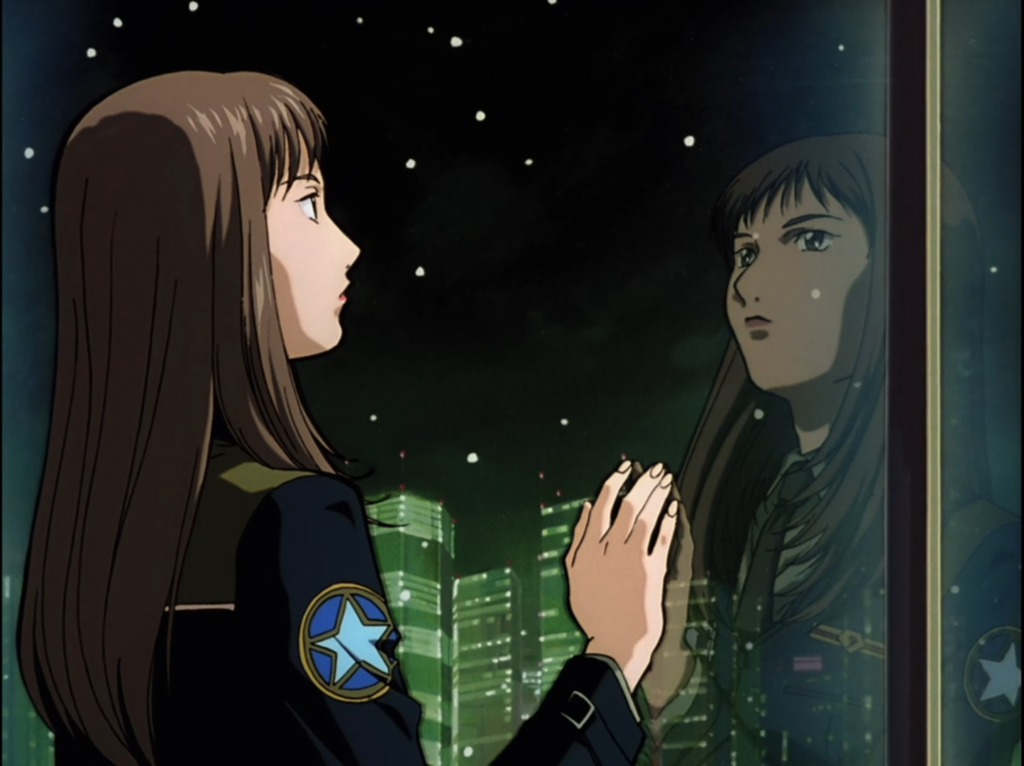 We’ve been calling Gundam Wing Endless Waltz a Christmas movie for the duration of the article because, let’s face it, we needed a hook. However, if we unblind ourselves from all the Christmas lights and wipe the snow from our eyes, we have to ask ourselves if it really fits the criteria. Could you put this fine Gundam effort in your 25 Days of Xmas rotation alongside Rudolph The Red Nose Reindeer and Jim Carey’s The Grinch? Some people might say that any movie that takes place during Christmas is a Christmas movie, though others might take the more conventional approach requiring that Santa and the Christmas spirit need to play a significant part. Played out as it is to say this, if Die Hard is ‘a Christmas movie’, Endless Waltz could definitely be one, too. It may not feature Heero Yuy threatening to kill Chris Cringle, but wouldn’t his team’s struggle for world peace shown throughout the film be the ultimate Christmas present for everyone if successful? 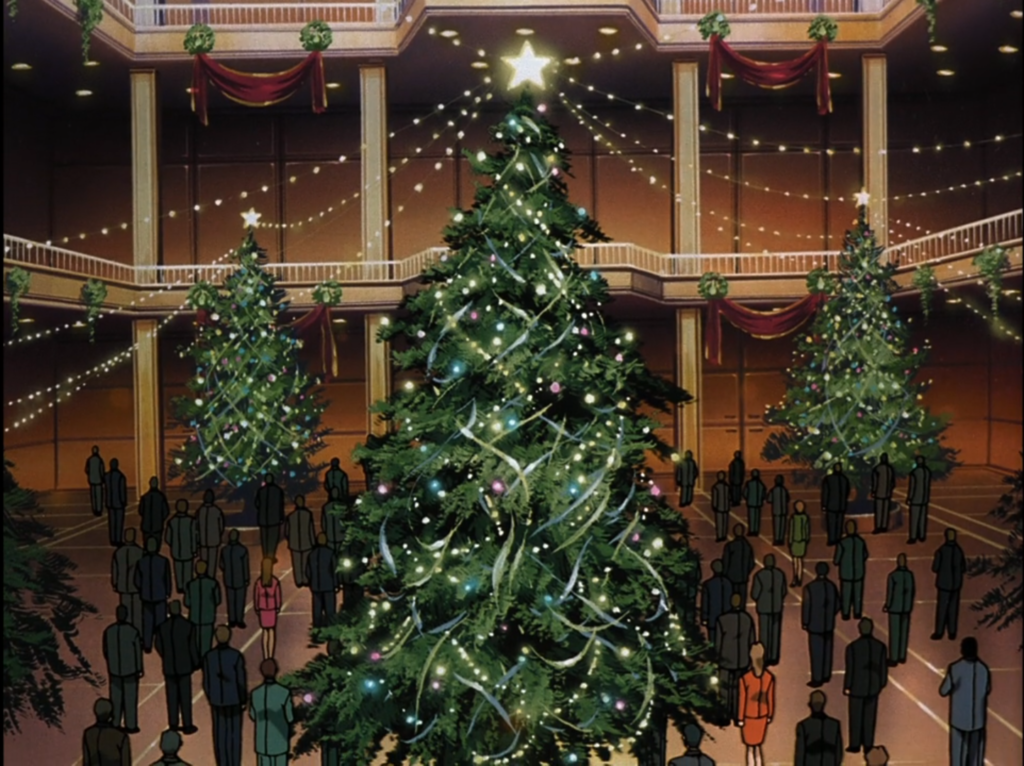 So, Gundam Wing Endless Waltz doesn’t feature Heero Yuy’s heart growing three sizes bigger on Christmas, but you can watch them pilot a Gundam with actual feathers coming out of its back. One thing the OVA-turned-film can eternally boast, however, is its incredible mech redesigns by Gundam, Virtual On, and Policenauts veteran Hajime Katoki. Simply put, no matter what any fan’s opinions are of Endless Waltz as a film, you’ll always hear them praise what the robots look like, arguably the coolest in the entire franchise. Endless Waltz was animated by Sunrise during their peak, each shot looking razor slick and crisply detailed even in extreme motion. With heavy dashes of vibrant synth flush and TWO-MIX alike, the movie’s great for the ears too. Holiday season or not, it’s something you’re able to behold with your entire being. 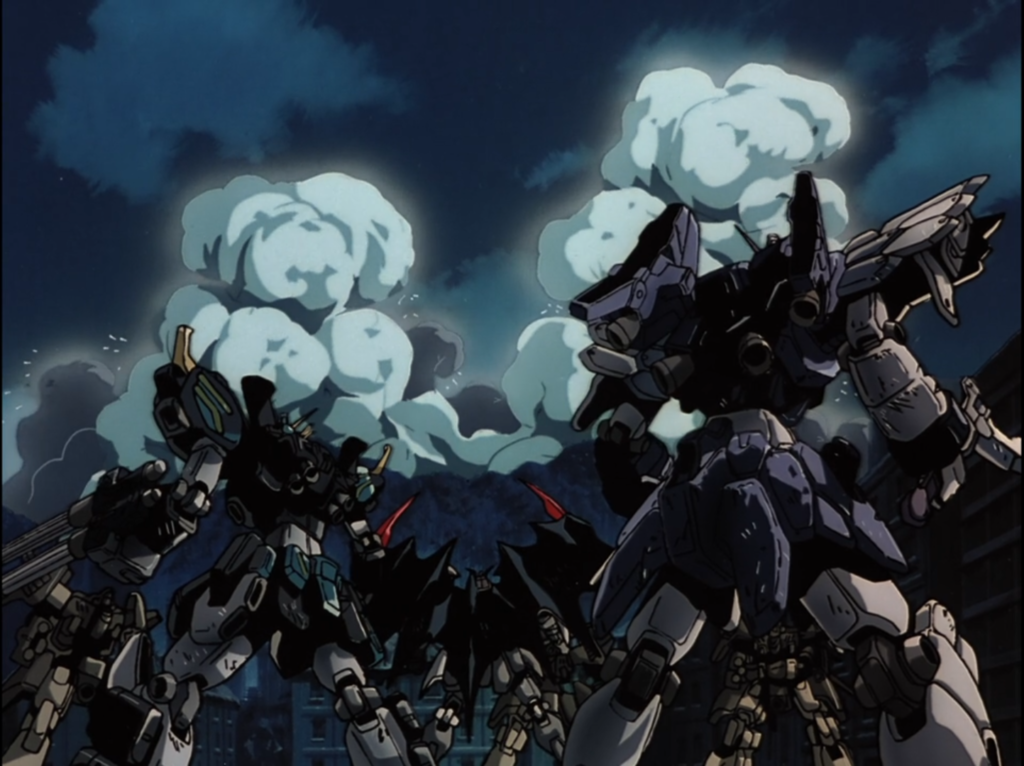 What if though, and hear me out on this one, Endless Waltz was a full-on Christmas movie? You could have Santa flying a Gundam around to deliver presents after Donner and Blitzen experience the horrors of war firsthand via a stray bullet or two. Okay, that probably wouldn’t be so fun to watch, but for a movie that takes place during Christmas Eve, we could’ve had a few more minutes of lush Christmas tree backgrounds. You could even hand-animate some Katoki designed mechs to fight in front of these backgrounds! Maybe some imagery of a Gundam head adorned with strings of Christmas lights; I don’t know I’m just spit balling. Despite the stereotype, robot anime actually aren’t as common as they used to be. Why not spruce up the genre with some Spruce trees? Fans would devour pretty boy mech pilots dressed up as Santa or an Elf fully animated, opposed to just for cafe decoration. We’d eat it up, at least. 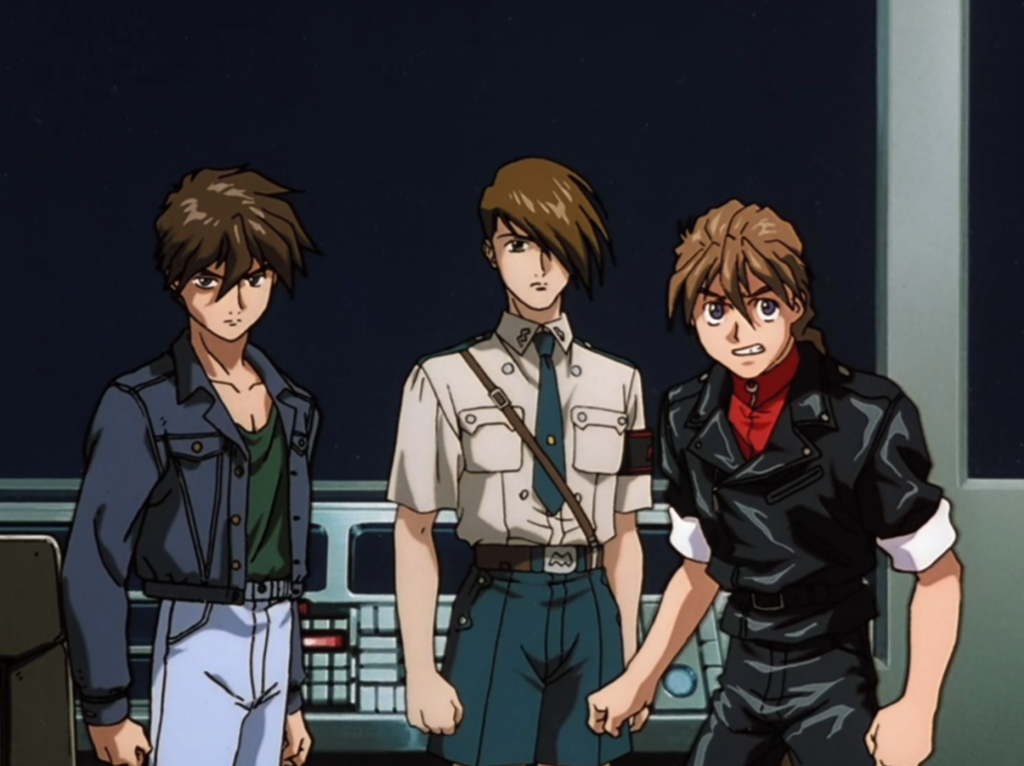 Perhaps the best Christmas movie with mechs by default, you can watch Gundam Wing Endless Waltz on Crunchyroll.