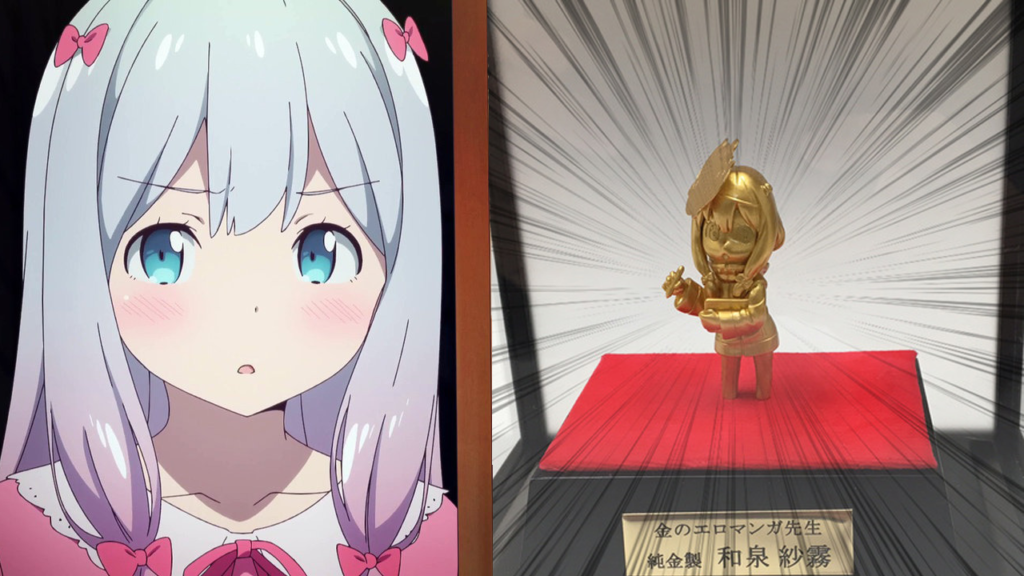 Announced on Sunday by Aniplex at AnimeJapan 2017, upcoming animated series Eromanga Sensei will be collaborating with Chugai Mining Co.,Ltd. to craft a $4,000 solid gold statue of heroine Izumi Sagiri. Originally published through Dengeki Bunko in December 2013, Eromanga Sensei is the latest light novel series from Oreimo creator Tsukasa Fushimi. A manga adaptation illustrated by Rin began serialization in Dengeki Daioh in May 2014.

Set to premiere on April 8 in Japan, Eromanga Sensei will be published by A-1 Pictures (Oreimo, Sword Art Online) and directed by Ryohei Takashita (Flip Flappers, New Game!). Featuring a musical score by Tomoki Kikuya, best known for his works with various anime of questionable nature such as ‘I Don’t Like You at All, Big Brother!’, it would seem the series has found it’s ideal composer.

A synopsis of the series can be found below:

The story centers around high school student Masamune Izumi who loves writing light novels. Having no artistic skill himself, Masamune always got his novels illustrated by an anonymous partner using the pen name “Eromanga Sensei”, who is known for drawing questionably perverted images despite being extremely reliable. In addition to balancing his passion and school, Masamune is also stuck with taking care of his only family member—his younger sister Sagiri Izumi. A hikikomori by nature, Sagiri shut herself in her room for over a year and constantly bosses Masamune around despite his attempts to get her to leave her room. However, when Masamune inadvertently discovers that his anonymous partner had been Sagiri all along, their sibling relationship quickly leaps to new levels of excitement, especially when a beautiful best-selling shoujo manga author enters the fray.

The statue is composed of roughly 20 grams of 24-karat gold and is priced at $4,000 (plus tax). It will be available for purchase online through Chugai Mining’s official website, here.

Further details on the statue can be found below: