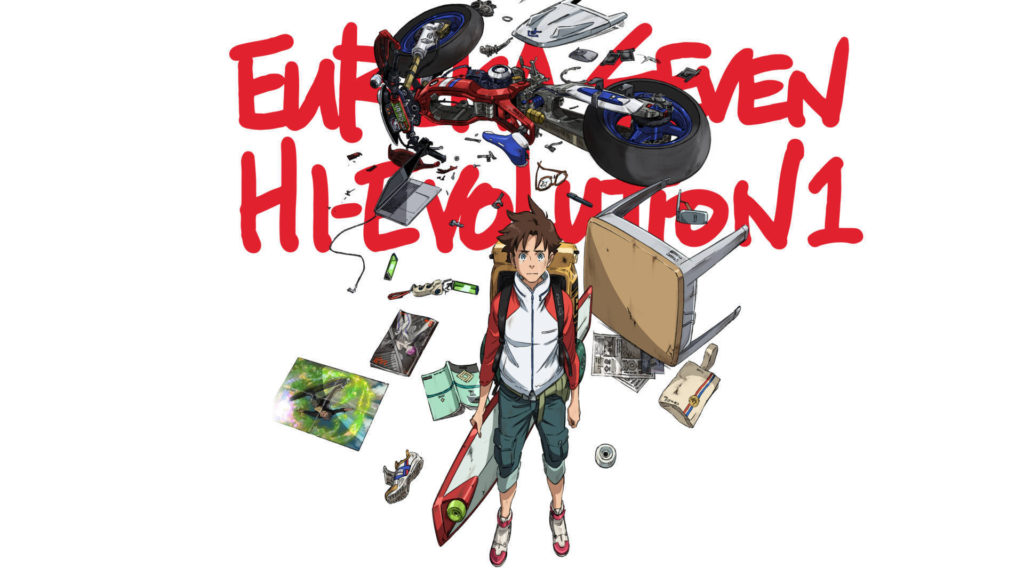 For a franchise as legendary and beloved by many as Eureka Seven, nothing less than all-out would be acceptable to commemorate the release of both the Blu-ray and DVD versions of Eureka Seven: Hi-Evolution 1. It’s the first part of a new trilogy of films, the three of which aim to retell the classic story of the original anime series, with both updated cuts and a number of extra scenes. On top of all that is a promised brand-new ending, something we’ll just have to wait until 2019 to witness.

In commemoration of the upcoming release, Bandai Visual has called in two special guests to create a promotional discussion video, where both parties discuss the Eureka Seven series and the influence it’s had.

The first round of interviews has already been made public, featuring both Taku Takahashi of m-flo and DÉ DÉ MOUSE. Taku is a self-described “Eureka Seven freak” who has been following the series from the very early days of the original anime. On the other hand,  DÉ DÉ MOUSE is a relative newcomer to the franchise, having only been immersed in Renton’s world wholeheartedly with this latest movie release. This creates an interesting catalyst for discussion as the two share both of their experiences with the series.

While the videos are yet to be subtitled in English, the back and forth between the two musical contemporaries makes for quite the discussion. For many clued in on the series, Eureka Seven is a story filled to the brim with both musical and pop culture references. This is especially prevalent in areas such as Adroc Thurston’s name being a play on “Ad-rock” from The Beastie Boys, or Renton’s name being a homage to Mark Renton of the Trainspotting film. It was definitely clear that the two got a kick out of being able to discuss these neat little easter eggs throughout the series.

Within their discussions, there’s also talk about the qualities they feel they share with main character Renton. They especially compare the overlap in musicians pursuing dreams of success, while Renton slowly but surely realizes his abilities, matures, and earns the respect of his peers. While the  Hi-Evolution films aren’t remakes per se, the duo do agree that they fall more under the category of a “remix,” something quite true to their musical roots. This method was compared to how J.J. Abrams chose to revive the  Star Wars universe in a new trilogy of films. By combining familiar story elements and tropes from the past, then fusing them with modern filmmaking and animation elements, the creators have achieved what can be considered a “remix” of Eureka Seven for both new audiences and diehard fans alike.

It’s a fascinating discussion for sure, so here’s hoping that the videos receive some official English translation.

The train doesn’t stop there, however, as the next set of video interviews is slated for February 22, 2018. Just a day before the home video release, director Tomoki Kyouda, scriptwriter Dai Sato, sociologist and Wako University professor Toshiya Ueno, and anime critic Ryouta Fujitsu will all gather at Tokyo’s Dommune nightclub to discuss all manner of topics surrounding Eureka Seven, its cultural impact around the world, and the new films. The individuals present for the talk, which will run from 7:00 pm to 9:00 pm JST, make for a panel of guests from backgrounds you don’t often see at these kinds of release events. Again, I’m hoping that this series gets some kind of official release in English too!

After the talk, there will be a special DJ set by Hiroshi Watanabe titled “Hi-Evolution 1 Special DJ Set!” As for the contents of his performance, the title certainly leaves little to the imagination. After all of this bombast for the release, I’m happy to give you all the juicy details on the various editions and formats you’ll be able to get your hands on beginning February 23:

Those of you who are yet to check out the first entry into the trilogy, this is your best chance. Visually the film is an adventure from start to finish, especially with the incredible animation quality of the newer scenes. Alongside this announcement, we’re happy to share that we’ll be conducting an AMA session with Eureka Seven director Tomoki Kyoda in collaboration with Reddit’s own /r/anime. The announcement for this can be found here.