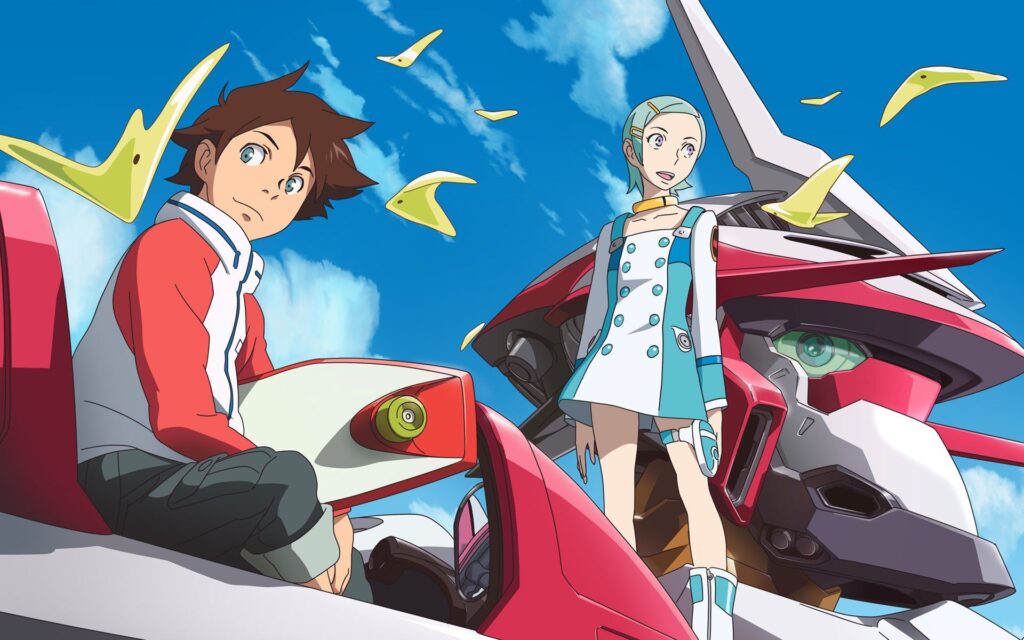 With Roots in Surf Culture, Eureka Seven Is a Love Story in the Sky

The anime world has been given numerous gifts by the studio Bones, not least of which is the Eureka Seven series. North American fans may remember the name Eureka Seven from searching the Cartoon Network TV guide trying to see when Ed Edd n’ Eddy was coming on next, as it was a prominent feature of the Adult Swim block prior to Toonami.

Fans may also remember being confused at the way ‘Eureka’ was pronounced, or this could all just be me. Either way, Eureka Seven was released in 2005, directed by Tomoki Kyoda. The character designs were handled by Kenichi Yoshida, and Naoki Sato did the music.

Eureka Seven is one of those anime heavily tied to music, specifically music from the 80s and 90s. Many of the themes and concepts represent surfer culture, and there’s quite a bit of 2000s pop/punk style in the main character of Renton Thurston.

Renton’s family also have similar musical themes, according to Dai Sato, who handled series composition for the original anime.

Eureka Seven takes place in a somewhat-similar timeline in the year 12005. Humanity fled into space after the arrival of the Scub Coral, an intelligent rock-like life form that landed on the planet roughly 10,000 years ago.

These revelations don’t come until later in the series, but the Scub Coral is looking to coexist with humanity, but being as dumb as a rock that is also capable of sentient thought, it cannot communicate properly with human beings.

Enter Renton Thurston, a 14-year-old with a dream of becoming a lifter like his hero Holland Novak of Gekkostate and he also looks to actually join Gekkostate. A lifter, or rather, the sport of lifting, is similar to surfing. It involves using a special hoverboard called a ‘ref board’ (short for ‘reflective board’) to ride Trapar Waves that are present in the air. ‘Trapar’, in turn, is short for Transparence Light Particles. This is a type of energy produced by Scub Coral, and humans have adapted it for flight.

Much of the show involves Renton’s involvement with the Gekkostate, a band of renegades that document the crimes of the military and defend themselves with their LFO robots. LFO stands for Light Finding Operation, and are special mechs used throughout the series.

LFOs are actually the remains of skeletons created by the Scub Coral that have been modified with mech parts and ref boards of their own, allowing the entire unit to surf on Trapar waves. They’re often used by the military as KLFs, or Kraft Light Fighters. They’re essentially LFOs, but with more military-grade weapons. 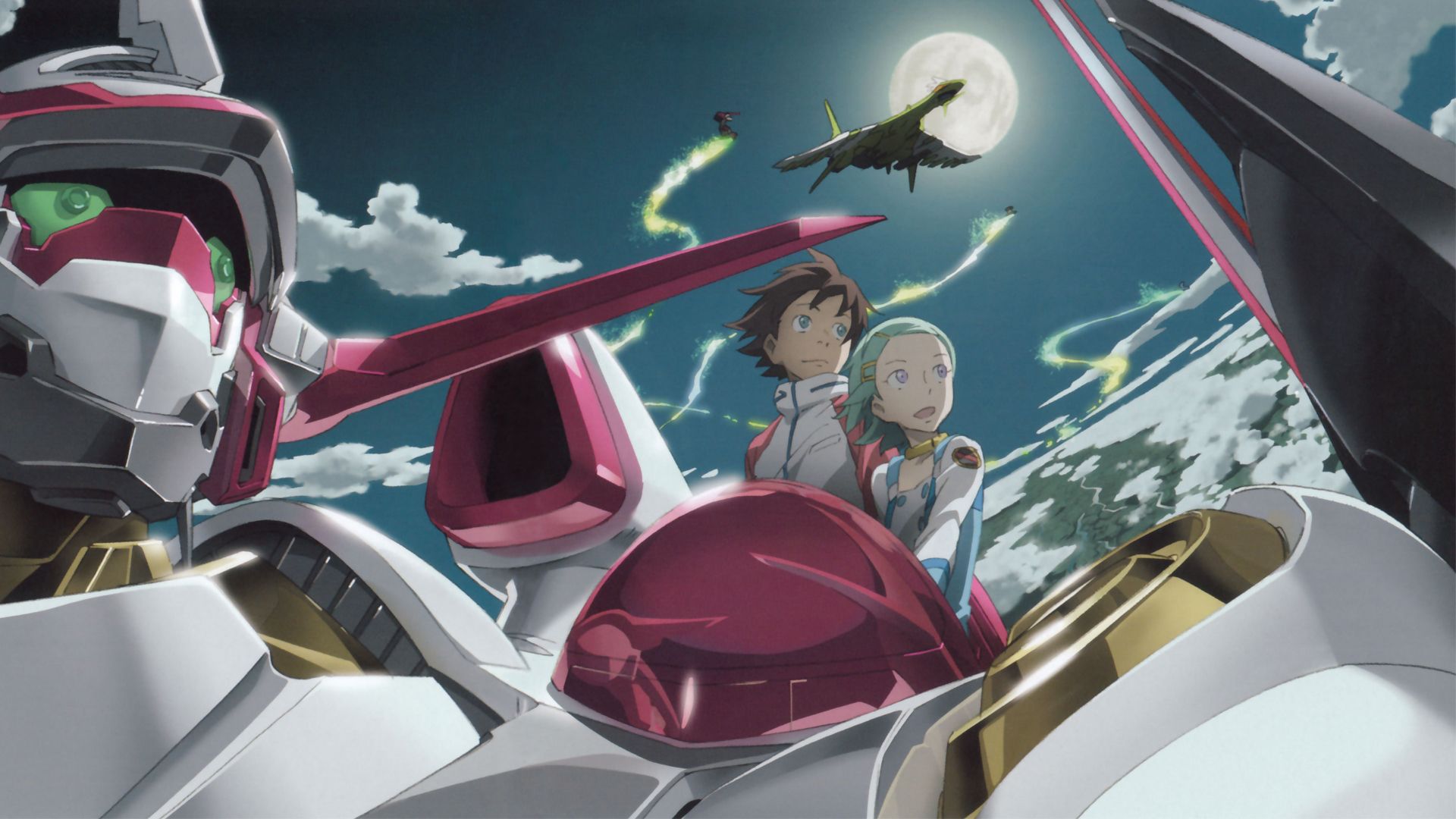 Eureka Seven Has a Large Cast of Characters in Gekkostate

The Gekkostate itself is made up of a variety of characters, as it is where Renton spends most of his time during the course of the series. He’s primarily seen with a mysterious girl named Eureka, who crashed her LFO into his and his grandfather Axel’s home.

Renton immediately falls for her, and many episodes involve other characters becoming jealous of Renton and Eureka’s relationship. They end up becoming pilot and co-pilot of Eureka’s LFO, the Nirvash typeZERO. Eureka could fly it before on her own, but is much better with Renton.

It’s discovered later that Eureka is actually a creation of the Scub Coral, otherwise known as a coralian. Her purpose is to learn from the humans and report back to the Scub Coral’s Command Cluster, as the Scub Coral itself has no way to communicate other than by fusing with things that come into contact with it, which is admittedly terrifying and kind of signifies hostile intent.

Dewey supposedly helped him defect as part of a plan to cover up work that Renton’s father Adroc Thurston was doing regarding Scub Coral and LFOs. Holland and Dewey have a fiercely antagonistic relationship that plays out throughout the series.

Dai Sato revealed in an interview that the names of Renton, his father, and his grandfather are all derived from films and music genres. Renton is the last name of Ewan McGregor’s character, Mark Renton in the film Trainspotting, and it’s possible that Thurston comes from a guitarist from the band Sonic Youth, Thurston Moore.

Likewise, Renton’s dad Adroc Thurston comes from one of the members of the band The Beastie Boys, Adam ‘Ad-Rock’ Horovitz, and Renton’s grandfather Axel comes from the lead singer of Guns n’ Roses, Axel Rose. This naming convention is prevalent in many of the other characters in Eureka Seven, especially the other members of Gekkostate.

Jobs, an immaculately dressed performer of odd jobs on the ship, and Woz, a grungy-looking hacker and tech specialist, are more than likely named after Steve Jobs and Steve ‘Woz’ Wozniak, co-founders of Apple.

Similarly, the characters Gidget and Moondoggie are based on characters from a popular series of novels and TV shows. Appropriately titled ‘Gidget’, the titular character Gidget is depicted as a surfer girl trying to prove herself in surf culture.

Moondoggie is the nickname of her boyfriend in the series. While it’s unclear whether the Gidget and Moondoggie from Eureka Seven are dating, they’re frequently around each other and have deep feelings for each other.

It follows Ao Fukai, the son of Eureka, who has mysteriously vanished. Ao teams up with a group that claims to be dedicated to Scub Coral studies in order to solve the mystery of his mother’s disappearance.

In this timeline the nations of the world are each attempting to understand the Scub Coral, but this new potential threat does nothing to soothe international tensions, and the series deals quite a bit with themes such as global conflict and war.

Eureka Seven: AO was received very poorly by fans who felt that the themes it dealt with and the way it dealt with them was somewhat antithetical to the previous series.

In addition to several manga, light novels, and even three video games, Eureka Seven has had three films or feature-length OVAs made continuing the story. In 2009 Eureka Seven: Pocketful of Rainbows was released. Known as Eureka Seven – Good Night, Sleep Tight, Young Lovers in English countries, the film was somewhat of a reboot or reimagining of the anime.

Instead of Scub Coral, humanity has been at war with an alien race known as the Azo for almost 50 years, since the year 2009. Six-year-old Renton lives with his parents and his adopted ‘sister’ Eureka.

Eight years after Eureka is taken away by the military, she reunites with Renton, who has joined the military, during a mission to reclaim a top-secret project. Eureka happens to be the project. In this reimagining the Gekkostate group is largely antagonistic towards Eureka and Renton, and are looking for a way to enter a ‘new world’ that will supposedly grant them immortality.

Meanwhile, the military is looking for a superweapon that will destroy the Azo for good, but Renton and Eureka are simply looking for a way to be together. 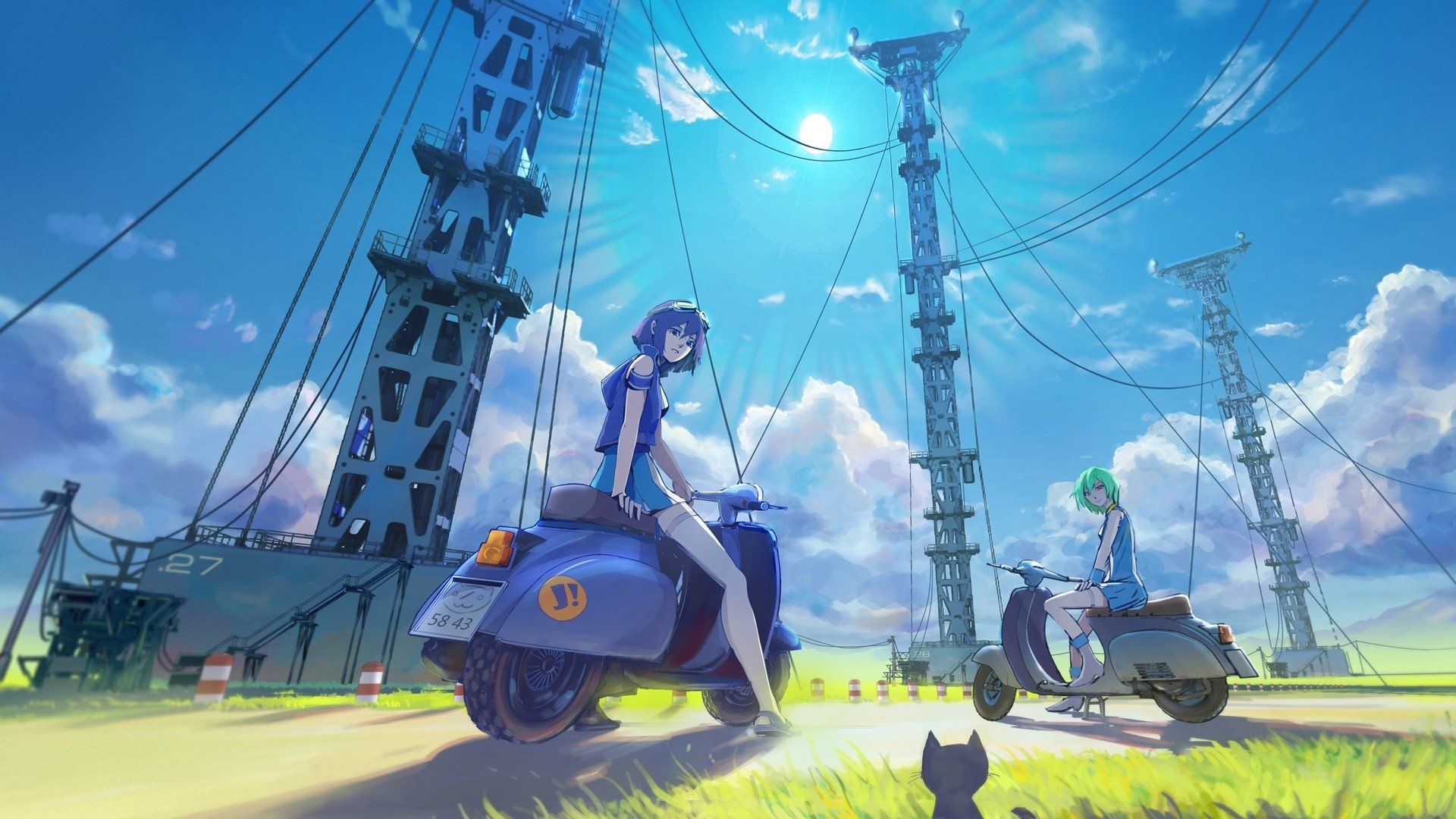 In this iteration Eureka is still a creation of an alien race, in this case the Azo. She’s essentially a robot spy designed to gather information on humanity and report back to the Azo. Throughout the series she shares this trait, whether artificially created or being experimented on as a child, with another character, Anemone.

Depending on what timeline you’re looking at, Anemone is usually found with Dewey Novak and functioning as his personal assassin. She also pilots a craft similar to Eureka and Renton, and has open contempt for them.

Anemone doesn’t feature in Eureka Seven: AO, but appears in Pocketful of Rainbows in a much less antagonistic role than in the main anime.

Currently the relationship between Eureka and Anemone is being explored in a three-part feature trilogy. Psalms of Planets Eureka Seven: Hi-Evolution, or simply Hi-Evolution, seeks to not only reboot the anime, but also recontextualizes many aspects of the original series.

The first installment takes place prior to the events of the first episode of Eureka Seven, giving context to Eureka’s life with the military, the formation of Gekkostate, and the event known as The First Summer of Love.

This particular event resulted in the death of Renton’s father Adroc Thurston, and was cataclysmic on a global scale. The second film, Anemone: Eureka Seven Hi-Evolution, focuses on the life of the antagonist/antihero and her focus on defeating Eureka as well as coming to grips with the life that’s been forced upon her.

The third film, known only as Eureka Seven Hi-Evolution 3 was originally slated to be released in 2020, but has been rescheduled to 2021. The plot of the third film is largely speculative, but it’s assumed that it will also explore certain elements of the anime and possibly recontextualize them, as the first two have.

Eureka Seven found a major fanbase in the early 2000s. Its use of musical themes and surfer aesthetics helped to deliver discussions of religious conflict, military crimes, and the impact humanity has had on the Earth itself.

Dai Sato has stated that he didn’t want these themes to be overt, but he wanted to give them an outlet. Apparently it has registered with the fanbase, and Bones has taken notice, delivering a slew of Eureka media over the course of the past decade.

Fans have readily consumed what’s already out there, and with the arrival of the third Hi-Evolution film, they’ll likely be yearning for more.