‘Eureka Seven’ is Full of References to Underground Culture 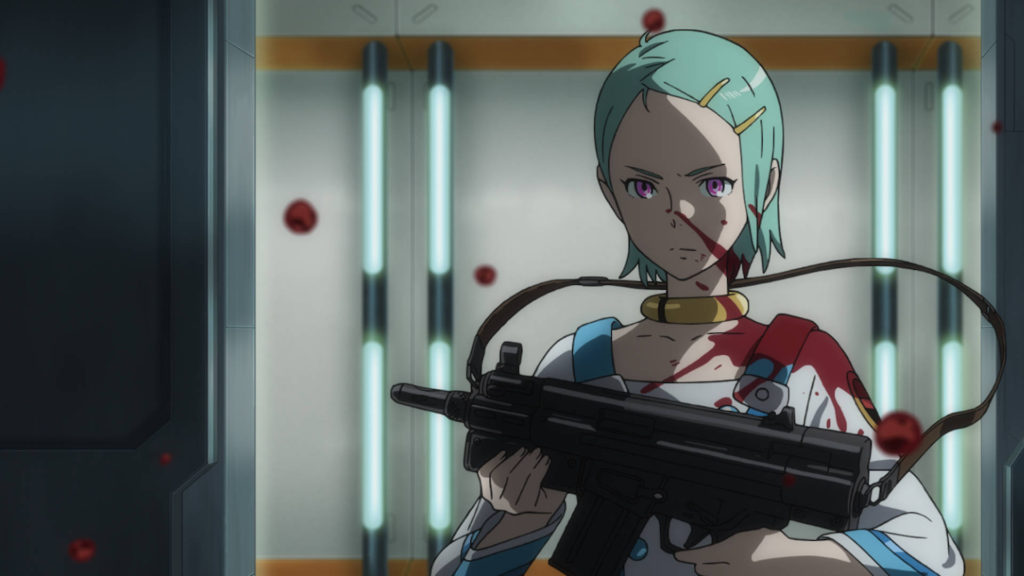 There’s a whole list of reasons why the staff at OTAQUEST love Eureka Seven so much, and I’m not just saying that because our co-founder Dai Sato quite literally wrote the story. It’s a carefully constructed tribute not just to the illustrious giant robot genre of anime we all know and enjoy, but it’s also an incredible tribute to the counterculture movements of its time. This list includes various elements of electronic/club music culture, as well as throwbacks to a long-list of influential musicians and artists that would define an entire movement.

It’s no secret that Dai Sato, as well as other staff on the series, are clear fans of electronic music. Between the fact that for a period, Dai Sato owned and operated his electronic label, all the way to more prominent notes such as the use of Hardfloor’s music in the series’ latest film, “Eureka Seven Hi-Evolution,” it’s been a well-documented fact within the series.

With “Eureka Seven Hi-Evolution” just around the corner, however, it’s important that we’re all aware as to just what we’re getting into in the film. From character names all the way to episode titles, let’s take a look at some of the best secrets in the world of Eureka Seven:

Renton Thurston: Pulling his name from two different people, Renton Thurston’s name contains references to both Mark Renton, a fictional character from the Trainspotting film series and Thurston Moore from early-80s rock band Sonic Youth. It was by combining the two’s names that we would end up with the name Renton Thurston for our series’ main character. Adroc Thurston: Slightly more straightforward than Renton, Adroc Thurston pulls his first name from Beastie Boys member Ad-Rock. The hip-hop musician apparently struck enough of a chord with the series staff, finding his reference to the fabled legend of the Eureka Seven story. Diane Thurston: If you ever thought to yourself “Wow, the Thurston family sure do share a few names with the Trainspotting film,” I can’t blame you. In the case of Diane Thurston, the older sister of Renton Thurston, she looks towards Diane of Trainspotting for her name. Somewhat weird though to have Renton be the brother of Diane, especially given where their names originated. Nirvash: This one likely comes as little surprise, but the Nirvash within the series was named after 90’s American grunge/alt-rock band Nirvana. It’d be fair to say that a lot of the anti-establishment themes of the band can quite easily be seen within certain aspects of the show, making it the perfect fit for the Nirvash. Terminus typeR808 & Terminus typeR909: For electronic music and club fanatics, this is where you’ll start feeling a little more familiarized. Both the typeR808 and typeR909 get their names from Roland’s most iconic drum machines to date, the TR-808, and TR-909. The kick drum and snare found within the TR-909, in particular, is found a whole bunch within the electronic soundtrack of Eureka Seven.
​ Terminus typeB303 “Devilfish” & SL-1200 MkII Gekko: Continuing along with the club-centric theme, the typeB303 “Devilfish” stems its name from the custom modification unit TB-303 Devil Fish that would primarily go on to define the acid music movement and techno scene. The Devil Fish modification, in particular, expanded the acid sounds and distortion capabilities of the TB-303. Following this was the SL-1200 MkII Gekko, which was the Gekkostate ship throughout the anime. It received its name from the legendary Technics SL-1200MkII turntable in which essentially every DJ used in the day. KLF Monsuno type MS10/MS20: The Kraft Light Fighter, perhaps better known within Eureka Seven as the KLFs, have quite a few references crammed inside their ranks. Firstly, the name KLF is a callback to the legendary electronic rave duo KLF from the 90s. The duo most infamously went down in the record books when they filmed themselves burning almost their entire career earnings in the remote isles of Scotland. Secondly, we look at both the MS10 and MS20 KLF units which receive their names from the Korg MS-10 and MS-20 synthesizers. If you weren’t aware, every episode of Eureka Seven contains a reference to various bands and songs in their titles. From Western musicians such as Oasis and Beastie Boys, all the way to Japanese artists such as Cornelius, we’ve gone ahead and picked some of our favorite title-song references.

The Chemical Brothers – The Sunshine Underground

It pretty much goes without saying that Eureka Seven is more than just your average animated series. It’s a subtle tribute to so many aspects of pop culture, as well as the very elements that brought about inspiration to create the series. We’re such a short amount of time away from witnessing the latest entry into the series, “Eureka Seven: Hi-Evolution” in cinemas, and we can only hope this list allows you to view the film with a deeper level of excitement towards what’s going on.

While this absolutely isn’t every single easter egg contained within the series, we encourage fans to perhaps rewatch the show with renewed excitement, or simply look forward to witnessing this all come to life on the big screen later this Fall. If you’re interested in finding out further information on the series, as well as the upcoming trilogy of films, you can find our full archives here.