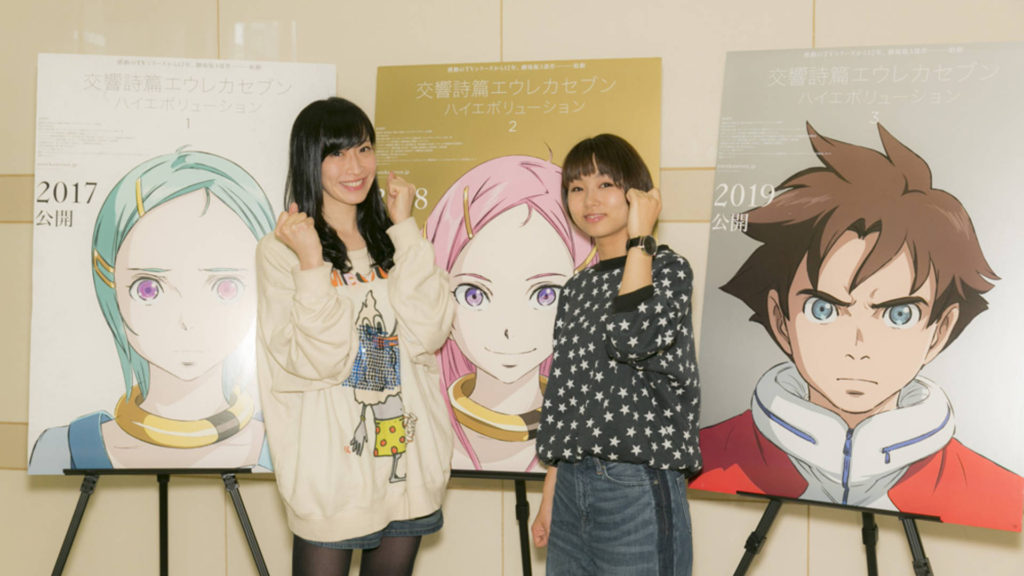 It’s been five years now since Eureka Seven last graced our screens in the form of Eureka Seven: AO. It wouldn’t be until earlier this year that we’d hear anything of the series, as Studio Bones went on to announce a trilogy of films retelling the original animated series. We were given a timeframe of each films release, spreading from 2017 through until 2019 with a release slated for each year. I was ecstatic when that news was announced and I’m equally ecstatic now, as we’re finally given a solid release date for the first entry into the trilogy ‘Eureka Seven: Hi-Evolution’.

Slated for a September 16, 2017 release, the first entry into the trilogy will be set 10 years after the ‘Summer of Love’ catastrophe. Following the story of Renton Thurston, it will detail his encounter with Eureka as they begin their interstellar journey together. Accompanying the news of the films release date, we also got our first look at the voice actors for the trilogy. I’ve gone ahead and shared them below:

Returning to voice protagonist Renton Thurston is Yuuko Sanpei. Outside of her work with the Eureka Seven series, she’s best known for being the voice of characters such as Boruto Uzumaki from ‘Boruto -Naruto Next Generations-‘ and Nozomi Yumehara from ‘Yes! Precure 5′. Her comment regarding the film can be found below:

Thanks to all of your love towards the Eureka series, this trilogy could be made. I really can’t express my gratitude. I’m excited to take on the role of Renton once more, as I fall in love with Eureka once more. So to all my fellow Renton’s in the world, let’s fall in love once again.

Also returning to take on the role of Eureka once more is Kaori Nazuka. It would seem that since originally appearing in Eureka Seven in 2005, that Kaori Nazuka has gone on to tackle a multitude of major roles in the anime industry. From My Hero Academia all the way to Space Dandy, it truly feels as if anything she touches is destined for greatness. You can find her comment regarding the upcoming film below:

Thank you so much for supporting me over all these years. I’m so glad that I can work on Eureka Seven alongside my favorite team of people. This is all thanks to those who have continued to support the series since the beginning! I’ll be working my absolute hardest, and I’d be pleased if fans see the trilogy through to the end.

Returning for the first time since the original animated series, Kouji Tsujitani will once again take on the role of former lieutenant Dewey Novak. Outside of his work with the Eureka Seven series, he is best known for his roles in animated classics such as Mobile Suit Gundam 0080 and Mobile Suit Gundam F91. His comment can be found below:

After more than 10 years, I’ve finally come to realize the importance of my involvement in this work. The fact that this project is being made into a film is purely because it is so loved by its fans. Because the film will be made into a trilogy, we will continue to devote ourselves and go beyond expectations!

Joining the team for the first time will be Toshiyuki Morikawa, who recently voiced Kira Yoshikage in the JoJo’s Bizarre Adventure: Diamond is Unbreakable animated series. He’ll be taking on the role of Gekkostate leader Holland Novak throughout the trilogy of films. His comments can be found below:

Eureka Seven is without a doubt a popular, and even historical series. I’m throughly aware of this, especially with my role as Holland Novak. It’s a film fans are looking forward to very much, so I’ve spent a lot of time going over previous works. I warmly welcome everyone that I’ll be working with, and I appreciate being able to record in such a nice atmosphere. Holland’s intense personality was ultimately a large attraction for me when looking at this work, and I’m convinced I’ll be able to re-discover his charm throughout the three films. I look forward to watching Eureka Seven evolve with you.

Returning once again to voice pilot Talho Yuuki is the ever-talented Michiko Neya. From Fullmetal Alchemist to Initial D, Michiko is truly a voice actor that has done it all. You can find her comment regarding the film below:

Not just for the sake of nostalgia, but I’m truly looking forward to these new Eureka Seven films. Because of it’s nature as a trilogy, let’s look forward to each installment together.

Another returning patron to the series, Juurouta Kosugi will be tackling the role of Charles Beams head on. Best known for his roles in the original JoJo’s Bizarre Adventures OVA’s, as well as the Mobile Suit Gundam series, Juurouta knows how to pick his characters. His comment can be found below:

To be honest, I’d like to be a man like Charles. Both Charles and I are the real deal, I think. Love and faith… Let’s just meet in the theater! You better bring another handkerchief too!!

Everyones favorite mom is back! Returning to voice Ray Beams is Aya Hisakawa. With the experience of series such as Dragon Ball Z and Uchuu Senkan Yamato 2199 behind her back, it’ll be exciting to see what she brings to the trilogy. Her comment can be found below:

Though the setting has changed ever so slightly, the personality of the ideal mother who loves Charles and loves Renton like her own son is the same as always. I was extremely glad to be playing Ray again after all this time.

Last but absolutely not least is the incredibly talented Toru Furuya, or you may know him as Tuxedo Mask from Sailor Moon. Taking on the prestigious role of Adroc Thurston, the esteemed father of Renton Thurston, this will be Toru Furuya’s first time working with the series. His comment can be found below:

I became engrossed in Adroc’s personality, and my regular thought circuits didn’t operate properly for about two days. It’s a symptom that only ever appears when I’m perfectly combined with a role. I felt a pleasant pressure during the voice over sessions, but at times it was quite challenging. I’m proud I could act as a centerpiece to the series’ story, and I believe I truly created something legendary.

Set to release September 16 across Japan, the first entry into the Eureka Seven trilogy is looking like it’s something not to be missed. For further information on the films, be sure to check out our previous interviews with script-writer Dai Sato here. Additional information can be found via the official website, here.
AdrocAya HisakawaCharles BeamsDai SatoDewey NovakEurekaEureka SevenHi-EvolutionHolland NovakJuurouta KosugiKaori NazukaKouji TsujitaniMichiko NeyaRay Beams
Join Our Discussions on Discord
Join Now