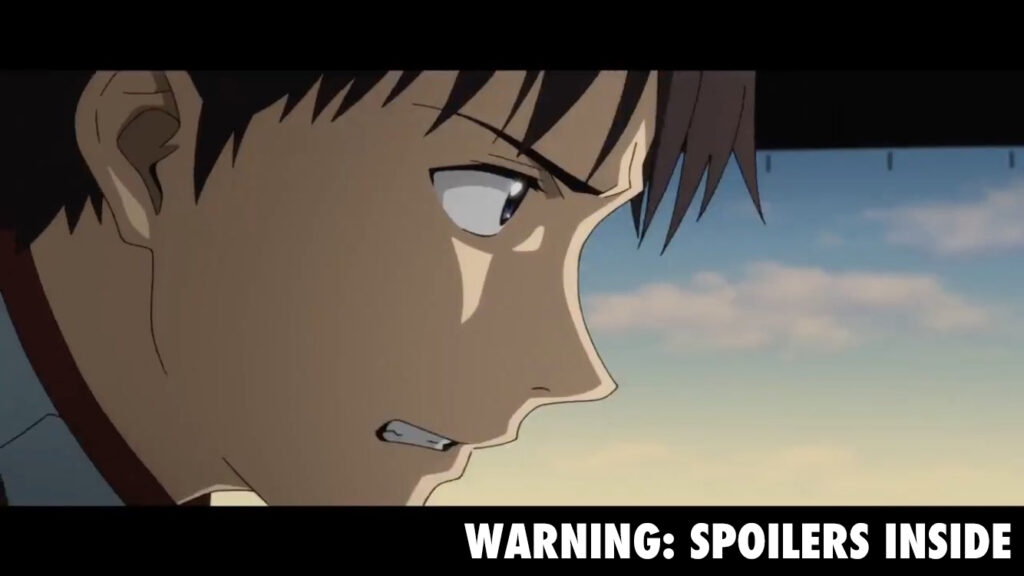 It reveals minor elements from the first act, and a few plot points that might hurt your viewing experience and enjoyment of the movie.

If you want to go into the movie 100% blind, we suggest you don’t read this review.

That said, we do have a spoiler-free version of this review here.

The world as we know it ended last night and now we’ve been born anew: As of 8 March 2021, humanity shifted into the timeline in which Evangelion 3.0+1.0 Thrice Upon a Time concretely exists in watchable form. Our collective anxieties, hopes, and predictions for Hideaki Anno’s finale now mean nothing, replaced by his artistic truth and our future contemplations.

Maybe the oldest of Evangelion fans realized this walking out of the theaters on 19 July 1997, when End Of Evangelion told them to eat dirt. Circumstances have changed, though. The Rebuild of Evangelion project manifested through a long-term international desire for ‘more Evangelion’ (opposed to just local death-threats clamoring for it) and Anno seeing an opportunity to address what specifically he saw as past mistakes.

We’ll try to keep detailed spoilers to a minimum, but those wanting to go in blind, be warned.

Evangelion 3.0 ends with one Asuka Langley Shikinami, disgustingly, forcibly dragging one Shinji Ikari, despondent, up a sandy hill, with a girl not named Rei Ayanami in tow. 3.0+1.0 picks up shortly after, with Asuka still angry, Shinji still a lump, and Not-Rei increasingly inquisitive. Her not being Rei quickly becomes important, with the first act of the movie largely exploring her learning about real-life for dual purposes: First, all Ayanamis are their own people. Second, we see an outside world. The latter point specifically serves our first ‘Bye Bye, All Of Evangelion’. Instead of Nerv and Tokyo-3, a rag-tag pocket society built from the ashes of a failed third impact sets real stakes for all the Evangelion on the horizon.

Anno quickly dives into a series of beautiful, life-affirming scenes, actually quite in keeping with the first two ends of Evangelion. Instead of esoteric meditations on existence and dialogues with idealized dream-selves, however, Anno shows the joys found in daily motions of living. Shots of Sokkuri-San, Not-Rei’s temporary name with ‘Sokkurisan’ meaning ‘look alike’ in Japanese, in awe when feeling the grasp of a newborn baby’s hand, learning the distinction between ‘a job’ and ‘orders’ while toiling away in the vegetable fields and rice paddies, and trying to clasp the meaning of concepts like ‘Thank You’ and’ Goodbye’, make for something different and warm but still Evangelion.

Not all fun and games here, however, with one of the film’s highlights seeing Asuka viscerally shoving food-rations down Shinji’s puke-filled throat, with animation polish about equal to her infamous ‘gets eaten alive’ scene in End Of.

It’s Evangelion, after all.

Hideaki Anno’s inclusion of the small moments has always been key to his directing, even if they don’t get the same adoration his clever visual-workarounds for non-existent budgets have. It’s joyous seeing Anno do nice for once, but the whole borderline slice-of-life first act also smartly reacquaints us with the Rebuild Of characters, then distincts them from their Neon Genesis counterparts.

Evangelion 2.0 first started progressing the cast as people beyond their End Of selves and 3.0 changed the paradigm completely. Here, Anno forces you to accept those changes. Asuka dropped her general animosity, Rei toils in the fields. Heck, neither of them even have the same name as their NGE originals, and Misato’s not beering her nights away anymore. Turns out 14 more years of pain, being in charge of the world’s premiere and only Anti-Nerve organization, and becoming a single mother sobered her up. We find Shinji Ikari at a crossroads once again here, although past ‘I mustn’t runaways’ are replaced with Shinji needing to accept reality.

Another huge difference has Shinji quickly making up his mind after witnessing Sokkuri-San’s death in traditional Anno fashion as the film starts sketching a destination. Now we’re forced to utter ‘Bye Bye All of Evangelion’ again as Anno openly rejects the self-pitying NGE Shinji, who everybody in-universe now hates. The Rebuilt Shinji Ikari finds his answer well before the end of 3.0+1.0.

That settled, the film has time to dance through a few other hangings-ons and motifs, first brought to life by Gainax and a much younger, angrier Hideaki Anno in 1995.

Let’s put a pin here for a moment, and at least briefly address some of the more technical aspects: Evangelion 3.0+1.0 looks and sounds great.

Shirow Sagisu turned in some of the best work in his varied career, rearranging deeper cuts like ‘Seperation Anxiety’ and bringing in all sorts of esoteric acoustic, giving this film its own sonic identity. Plus, we get another gorgeous Utada song to boot.

One can’t help but notice when the credits are rolling, that Khara enlisted help from just about the entire animation industry, from fellow Gainax alumni Trigger to visual magicians Wit Studio to lay pristine character animation and backgrounds all over this thing. Each updated design remains fully realized with consistent fluid and detailed movement, and both the film’s realistic and abstract backgrounds drop the jaw.

Perhaps here we find one point of contention with the film: The CG sure does look like CG. Cycling through dozens of creative mechanical designs that push how an Evangelion could conceivably be contorted to their limit, CG’s a necessary undertaking.

Beyond the Robot Action, most of which looks good, though not really aiming for 2D/3D integration, the CG also gets sculpted to create the purposefully large and empty spaces, only populated by color-gradients and other-worldly objects that much of this and the last film exists in. Those environments on their own look a bit underwhelming, but they’re in service, with the failed 3rd and 4th impacts having destroyed everything; less like a hurricane in a city and more like a giant eraser to the fabric of reality. Additionally, these simpler backgrounds also let that 2D animation shine.

So, let’s get back to what they shine on.

As we slip towards the final act, even the smaller details become bigger spoilers so we’ll keep the ‘capital P’ Plot Points to a minimum from here on. You’ll have to come to your own conclusions about the blanks filled in, but you’ll either be delighted or horrified to hear Evangelion 3.0+1.0 hammers down some significant plot-dumpage.

For decades we’ve all clamored, argued, drawn-blood over what happened before, during, and after Evangelion… and now we know. Granted, some of these answers do ask new questions that we’ll spend 20 more years passionately screeching about on internet soapboxes, but certain facets are finally made clear. Some of them will either have you relieved to know your specific crack-pot theory was the correct one, and others will blindside you. A few will break the brains of even the most studious of Eva scholars.

The movie will divide people, but this stripped-down spotlighting brings us to the film’s emotional climax: The breakdown of Mister Gendo Ikari. 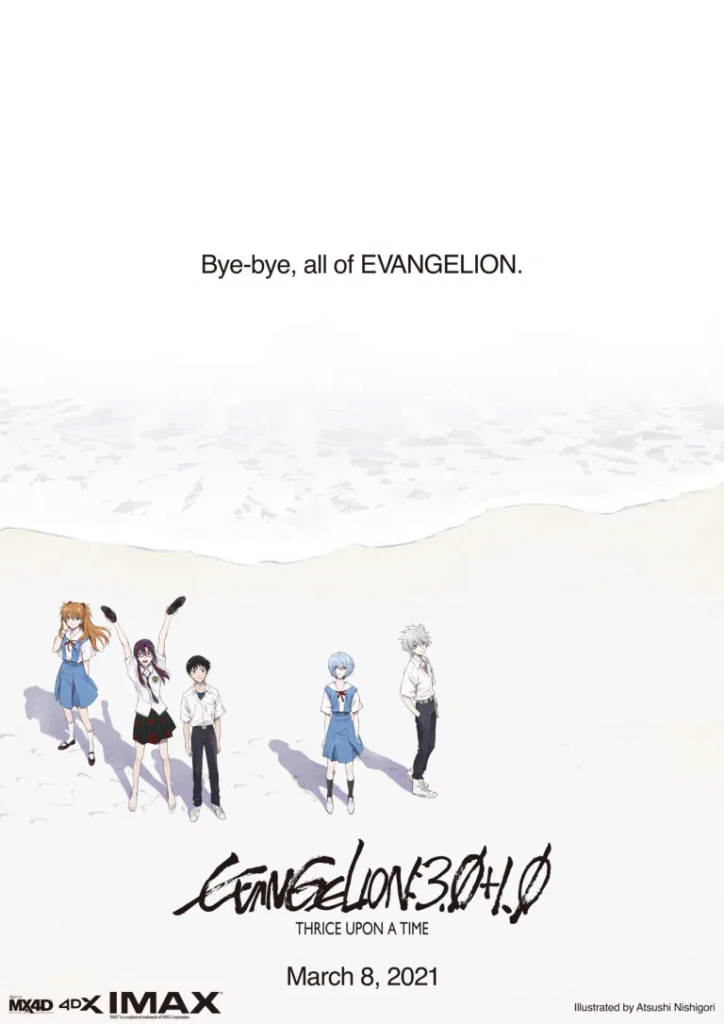 Hideaki’s most daring Rebuild leap, Evangelion 3.0+1.0 strips Gendo Ikari naked in the penultimate and climatic ‘Bye Bye, All Of Evangelion’. Sure, you know by End Of Evangelion that he’s just trying to see his wife Yui Ikari one more time, but this film lays bare all the despair that led him to cross the line into committing untold atrocities and birthing unholy abomination. By letting us see anime’s greatest villain at his most sad, reduced, and pathetic, Anno is finally opening the door into the brain of Gendo the man, and his wanting to Kill God starts making a sick sense.

The fact that Gendo Ikari also sees the same realization and growth experience by Shinji, Asuka, and Co., could only be meaningfully achieved in The Rebuild of Evangelion, specifically in a second Evangelion cycle that is self-aware and knows it’s being watched with 25 years of complex manifestations in its viewer’s heads, spiritually confirming the tetralogy as essential… a much-needed part of the Evangelion experience. Following that, the spiritual Evangelion closure, that you’ll either fully embrace or outright reject, makes for the cherry on top.

Anno orchestrates one last full Anno spectacle to that end, rest assured, though we’re choosing to omit the details.

You’ll see at the bottom a ’10’ score for Evangelion 3.0+1.0… Call it my way of saying ‘Bye Bye, All Of Evangelion.’ You might be able to nitpick x, y, and z about 3.0+1.0 ‘as a film’. Many will. The movie, however, plays out as an emotionally resonant, well-paced three-act structure relayed in pristine packaging, and to the committed Evangelion fan, the classification ‘as a film’ remains secondary.

What truly matters is whether Evangelion 3.0+1.0 Thrice Upon a Time can be considered authentically Evangelion.

Just as Shinji chose Congratulations in NGE, not to become thinkgoop in End Of, and the real world in Rebuild, Hideaki Anno wanted all of us, fans, himself, and Shinji alike, to grow past the need for Evas and to be able to say Bye Bye, All Of Evangelion.