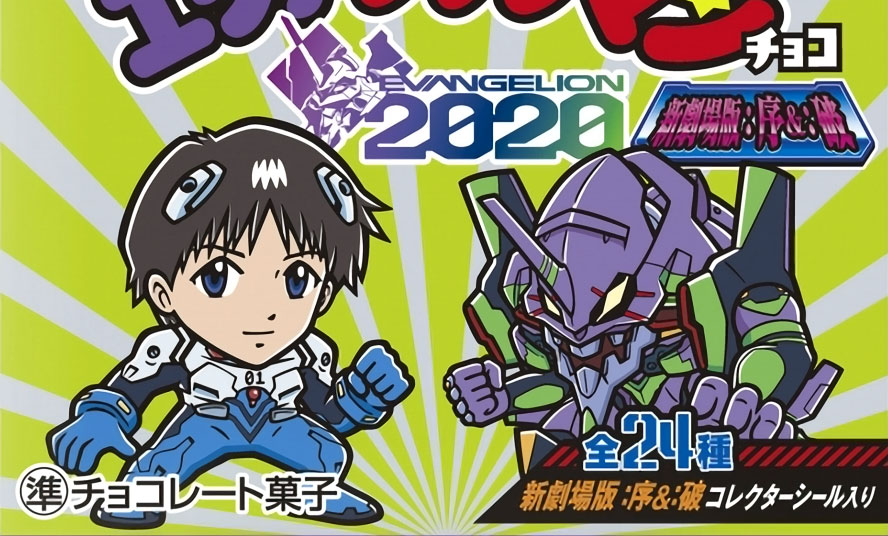 Evangelion & LOTTE’s Bikkuriman have crossed paths before, a couple of times in fact. Late last year they released a set of seals that featured the series’ characters, Eva units, and angels with artwork based on the designs found in the rebuild films. Earlier this year the collaboration continued in the form of a limited campaign that saw some special goods released. Today a third collaboration has been announced, this time based on the first 3 rebuild movies with artwork directly from Bikkuriman’s designers in its iconic style.

Some preview artwork has been revealed already of Shinji & Asuka both in their normal forms, but also as the series’ “heads” Super Shinji Zeus, and Cross Asuka Langley. The latter are assured to be the rare seals in the set, although there most definitely might be more. Something to note about this release is well is that it’s actually coming in the form of 2 different sets of 24 seals each. The first set will cover the first 2 Rebuild movies, with the second set covering the 3rd.

I will have to note that this set is following the somewhat frustrating practice of being split between regions. The Set based on the first 2 films being exclusive to Eastern Japan, and the other set being released in Western Japan. Oftentimes the sets will see release nationwide after a few months, but it isn’t guaranteed.

If you’re not familiar with Bikkuriman, it’s a long-standing product made by Korean snack company LOTTE. Each pack contains a chocolate/peanut wafer snack with a randomly inserted seal (foil sticker) featuring one of many characters either original to the series or from the current collaboration. The series started with stickers that featured everyday items rendered in such a way that they could be used to play tricks on people when affixed to different surfaces.

In the ’80s the series grew to massive success in Japan with the introduction of the “Devils vs. Angels” series, designed by Minoru Yonezawa and Satoshi Hyodo at Greenhouse, so much so that it became a national topic when the demand caused societal problems like theft or food waste when people were throwing away the snack to get the seals. Now 35 years later the series is still going strong with several releases each year and collaborations with some of Japan’s biggest pop-culture properties.

This new set drops on June 23rd all across Japan. Bikkuriman gets pretty limited distribution outside of Japan, but I’ve definitely seen past collaborations (such as Dragon Ball Super) in Japanese supermarkets in the US so there’s hope for international availability. I’m a pretty rabid Bikkuriman collector and have a complete set of the previous collaboration, so I can’t wait to get my hands on these ones as well.