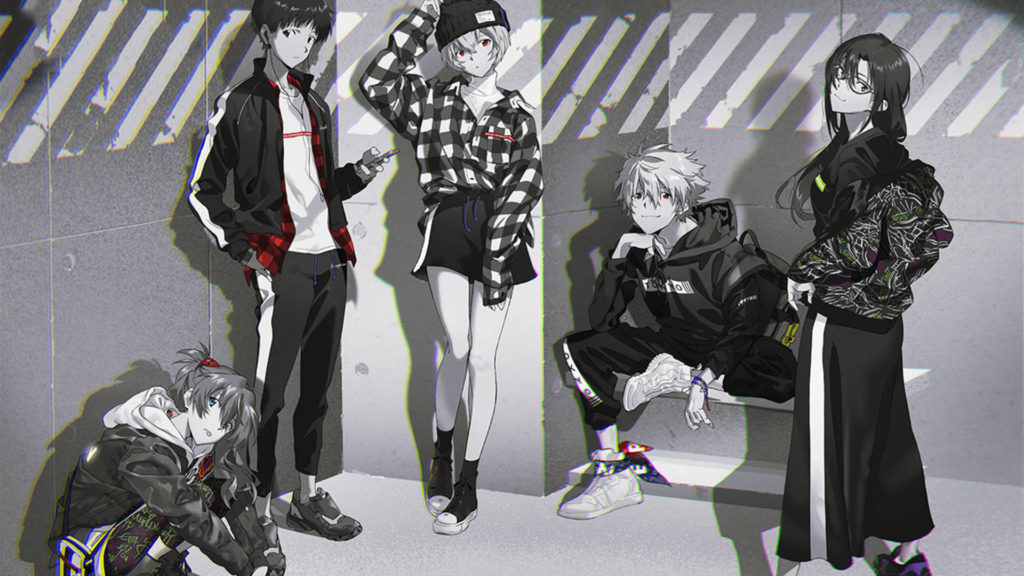 Although Hideaki Anno’s 1996 landmark series Neon Genesis Evangelion may have its roots in Anno’s own relationship with otaku culture, ever since the advent of the “rebuild” movies starting in 2007, Evangelion has been at the forefront of bringing otaku culture into the mainstream. Nothing has done that more than the series’ own connection to the world of fashion, having collaborated with many influential designers over the years, as well as launching its own fashion brand in RADIO EVA.
With this year seeing in 10 years since RADIO EVA’s founding in 2008, it should come as no surprise that the brand is adding some seriously stylish new additions to its lineup. Not only that, but prominent animator Yoneyama Mai – who has worked as an animation director on such well-known projects as Black Rock Shooter, Little Witch Academia and Darling in the Franxx over the years – is drawing the key visual for this line-up, which has, in turn, informed the aesthetic of the pieces. Check it out below: Most of the clothes that the characters are wearing in this key visual are the actual pieces that have been added to RADIO EVA’s inventory, and while I love the aesthetic of most of them, there are a few stand out pieces for me. First up are the two flannel shirts that both Rei and Shinji are wearing. There are actually two colors for this piece, but personally, I’m more drawn to the white and black color scheme worn by Rei: I’m also drawn to the track gear modelled by Shinji, who always appears to be the character that many of the Evangelion fashion lines over the years choose to model track gear. Why that is, I have no idea, but nevertheless the track pants and jacket he wears not only look comfy but are subtly accented by the color purple, adding that Unit-01 flair: But even better than the previous pieces are those modeled by the lovely Asuka. This isn’t just because she’s the best girl (a potentially loaded statement, I know), but because they exemplify her character perfectly – as well as being stylish, of course. The leggings she models have NERV ONLY written on them in a scrawl, which reminds me of her mental anguish after her fight with the Fifteenth Angel. A strange thing to want to wear for some, but for me, it’s a perfect way to show my love for her character arc and development. Her bomber jacket is also great, pairing a nice military-green palette with bold NERV text on the back. But even if you’re not a fan of that design, then don’t worry – because the jacket can be reversed to reveal a similar, scrawled design to her leggings. And while I think I’d prefer to be a little more subtle, it’s always great to have options. All of the above items, and much more, can be found via RADIO EVA’s online store on the “10th” tab. They can, of course, be bought in real life from the Eva Store located in Ikebukuro, where you will also be able to try on the various items for size. Considering that these items are on the expensive side, that might be a good idea. Furthermore, a pop-up shop is scheduled to take place in Sapporo from October 24, as well as one in Ikebukuro from November 22.