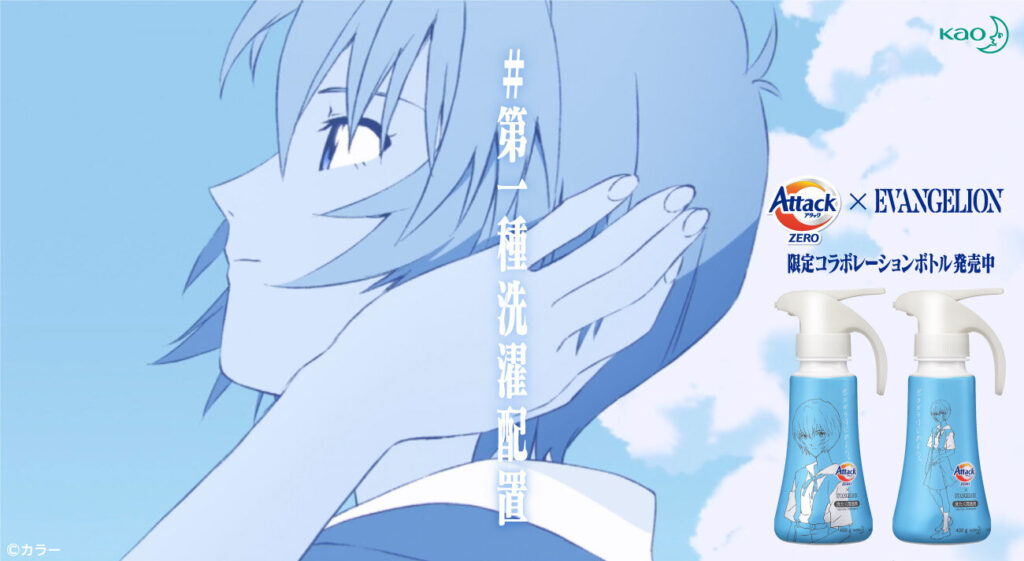 We ended up at the heart of that question in different words on the most recent episode of our newborn OTAQUEST podcast (streaming every other Friday morning / Thursday night depending on which side of the Pacific you live on wink-wink), and ultimately we came to the conclusion that ‘the way Evangelion looks has a lot to do with it.’ Spawning from said conversation, we now dive into the anime’s iconic Visual Language through the lens of its very merchandise to show you what separates it from, I don’t know, Naruto character art shirts found on discount at your local Target.

Evangelion Colorways Via the Fashion of Evangelion Ties

Green and purple, red and orange, navy blue and back, regular blue and white, see any item such as a sneaker compromised of a singular set of these two colors and you automatically think ‘oh, is that some Evangelion merchandise?’ Even with products that have no connection to Evangelion or those that existed before the show’s 1995 debut, if that purple and green have been slapped all over them, Unit 01 automatically conjures itself inside your mind. What’s more, these palettes, as their own independent facet of Evangelion Visual Language, could only solidify through merchandise and other secondary material adopting the robot’s individual covers. The Evangelion tie collection most impressively utilizes said colorways by offering multiple patterns for each Eva. Most products would offer you one variant per color combination, but the tie-makers at Franco Spada realize the ‘Purple and Green’ combo, instantly recognizable, could be bent into various visual configurations.

Evangelion Mech Design Via the Floralization by Anna Sui

Hard to say if anything in the eternal Evangelion stew could call itself ‘underrated’, but people sure do underappreciate the robots in that darn show. I have been regularly guilty of saying ‘Evangelion isn’t really a mech show’ (imagine Hideaki Anno scoffing) because placing it next to Code Geass on a list irks the soul. However, it’s true that for a show called ‘Evangelion‘, the ‘Evangelions’ themselves aren’t as beloved to the fans as are the characters. A shame, because even stripping away any plot-based context and emotional attachment, these techno-humanoid hell-creatures look entirely unique. Even when Japanese designer Anna Sui remixes their appearance with a tripped out floral print, their giant freak essence (not being mean! they’re canonically exactly that!) still remains. Most mech design conversation revolves around ‘How cool x Gundam is’ but Anno came through with a mecha meta that both functionally and visually lends themselves to the whole ‘man-made ungodly abomination’ component perfectly, even when ironed-on a shirt. Neither this show nor the resulting Evangelion merchandise would be the same if the Evangelions looked like Megazords. And adding insult to injury, I don’t think anyone wants to spend 200 dollars on a handbag with a floral print Megazord on it either.

Evangelion Character Design Via the Cleansing of Evangelion Detergent

Sorry to all the old-school mech-heads out there, but fans at large really would rather wear a shirt with Rei Ayanami on it, hang up a poster of Shinji and Kaworu playing the piano together, and get a tattoo of Asuka than getting any of that with their respective EVA Units. Yoshiyuki Sadamoto’s brilliant Evangelion character design certainly sells literally tons of Evangelion merchandise and arguably remains the most enjoyed aspect of the Evangelion visual language spectrum. You could, say, slap Evangelion characters on household detergent and people would freak out. Put in the slightest effort to present that character art with some pizazz, instead of making it look like someone CTRL+V’d it straight onto the product, and you have yourself the coolest laundry detergent in existence. Of course, part of the reason Evangelion character merch is so prevalent is that people love Evangelion characters more intimately than most characters from other animes. However, part of the explanation why fans are so obsessive has to do with Yoshiyuki Sadamoto’s revolutionary design work; an endless positive feedback cycle, one Kao’s brilliant Evangelion laundry detergent so tastefully lauded.

Evangelion’s Typography Via the Storage of Evangelion Hard Drives

Just as easily, BUFFALO, who produced these hard-drives, could have thrown some Purple and Green or some rare Rei Ayanamis onto their solid-state security drives. However, when it comes to expensive physical objects one can actually use and may want to keep around for the long haul, something a bit more ‘subtle’ makes the better argument. Not that the word ‘subtle’ accurately describes Evangelion’s typography, recognizable at just a glance, but said actively typography avoids screaming ‘I spend too much time watching anime’. Simply by using all-caps HELVETICA (and sometimes Times New Roman) for the English text and an extra-boldened version of a Japanese typeface called ‘Matisse’, Anno carved an entire Evangelion aesthetic with its worlds alone. Honestly , said type-aesthetic reigns the most tasteful part of the Evangelion visual lexicon, with the show’s type-choices have become as integral to the secondary meta of the show as anything else. All the Evangelion merchandise that utilize the word-imagery, from shirts to the pictured hard-drives to memes that say ‘Family Guy’ but with the black background and white text of an Evangelion title card, prove said imagery’s essentiality to the greater ‘Evangelion’ concept.

Evangelion Merchandise Based Conclusions: It Looks Too Damn Cool

With 25 years of experience, Evangelion merchandise makers succeed by utilizing the entire iconic visual language of the show. Audiences respond in kind because, instead of just being provided ‘Rei on a pencil’, we see so much of what makes the anime memorable visually translated into the real-life objects we can touch, use, and wear. Of course, this article just scratches the surface of defining the Evangelion visual lexicon, as the cartoon’s color palettes, Yoshiyuki Sadamoto’s artwork, what makes those robots stand apart, the art, and its typography could all be explored in their own independent articles. Those components are all as much a part of Evangelion as the plot and the animation itself, and it’s the fact that the merchandise engages with those elements that allow manifestations like ‘official Evangelion branded Japanese currency’ to exist and for people to be receptive to them.