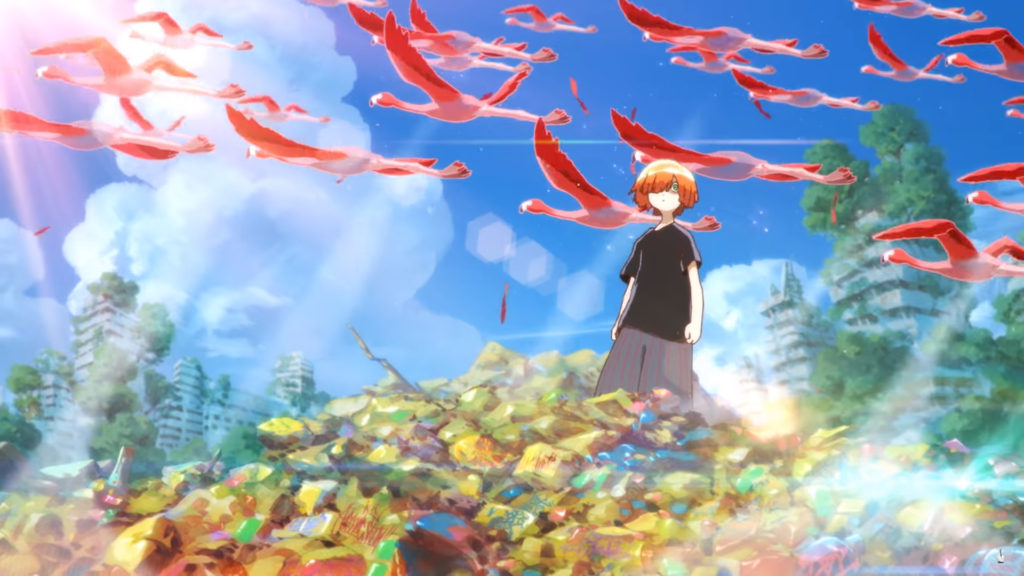 Working outside of the TV animation production space can generally be an opportunity to try something new and experimental within a short time-frame. Whilst all of the companies involved in production committees might not appreciate particular creative approaches, when it’s just a single client, things can get a bit more exciting. That’s especially true when your client is Eve, an Osaka-based rock outfit who frequently commission independent artists and animators to create unique music videos for them.

Their back-catalog contains a whole lot of gems, but one especially great work saw them call on animator is Okamoto who helped to develop the music videos for “Anoko Secret” and “Ambivalent”. Their track “Ambivalent” also found its way into becoming the opening of Okamoto’s Mecha-ude short film which managed to double its Kickstarter goal thanks to 999 backers.

However this time, Eve has opted to work with WIT Studio, as well as Your Name producer Genki Kawamura, and My Hero Academia producer Wakana Okamura to create their latest music video for “We’re Still Underground”; one of the tracks from their upcoming album “Otogi“, which is set to be released on February 6.

Unlike Eve’s previous music videos, this had a much larger staff assembled by a team of producers who have all been involved in high profile shows. The director is 10Gauge’s Nobutaka Yoda, who also directed the trailer for Your Name; the character designer is Naoyuki Asano, known as the designer for Osomatsu-san, and the background director was Yuji Kaneko, who famously was in charge of the backgrounds for Kill la Kill, the Little Witch Academia movies and Dragon Pilot: Hisone and Masotan.

Many of the staff responsible for the music video have tweeted about how proud they are of everyone’s work, but Yuji Kaneko, in particular, revealed some behind-the-scenes work on the backgrounds. This includes the original hand-painted backgrounds, but also an entire scale model of the destroyed city. Normally this sort of thing would be done in CGI, but Kaneko went surprisingly far in his work on this video.