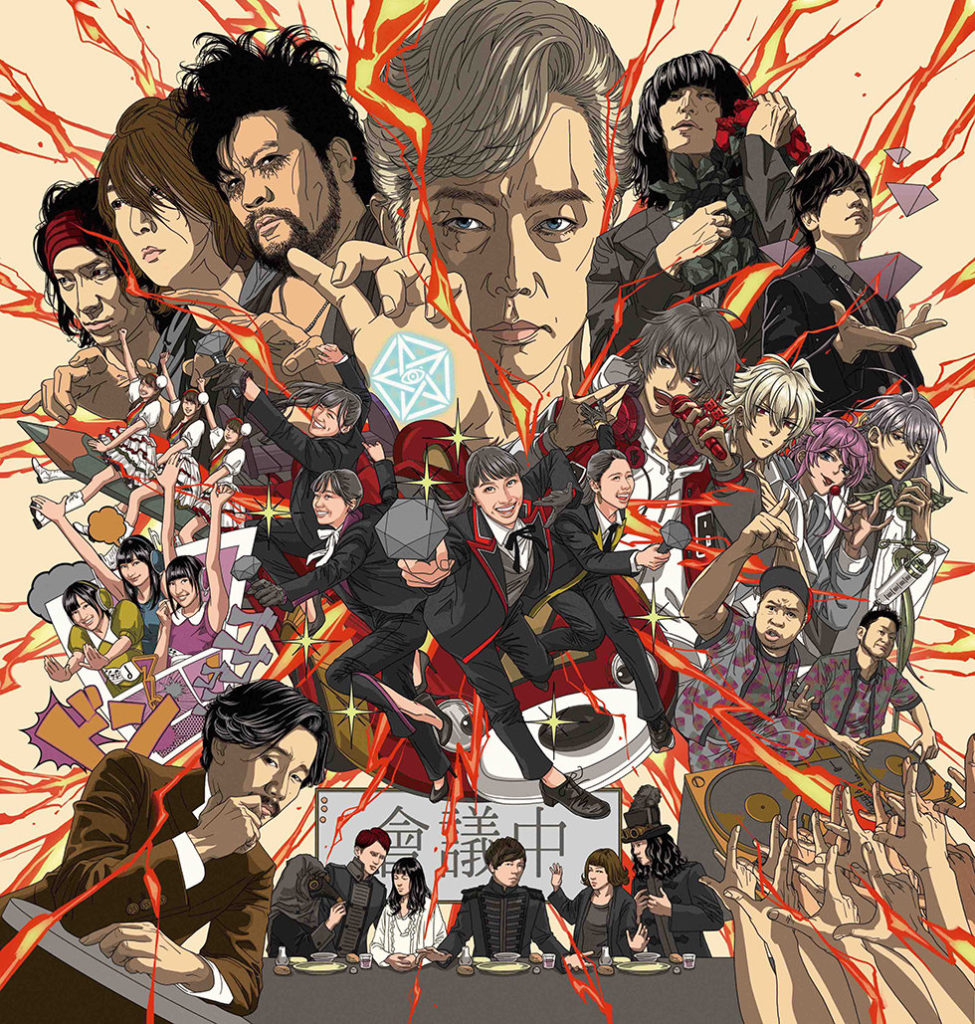 On the 15th of this month, the ‘EVIL LINE RECORDS 5th Anniversary FES.“EVIL A LIVE” 2019’ will take place in Yokohama. Although it is a concert, it would arguably be better to classify this event as being more of a party, a celebration of sorts. The Evil Line Fes concert is being organized by Evil Line Records, a sub-label of King Records, and brings together many of the artists under their label for a concert with the purpose of celebrating the 5 years that have passed since their inception with collaborations and more.

Big names like Momoiro Clover Z, TeddyLoid and Tokusatsu (not the genre) are joined by the members of the now-disbanded Rock a Japonica (who will debut their new unit during this event), The Dirty Dawg from Hypnosis Mic Division Rap Battle and more for a celebratory event for the record label. Although tickets for Evil Line Fes sold out months ago, merchandise that will be sold for the concert has been revealed, unveiling a celebratory compilation CD that also includes brand new collaborative tunes from the artists involved in the event.

By virtue of bringing all of these artists together for a single concert, the chance for these artists who would never collaborate otherwise has allowed for new songs to be created specifically for this event that will be performed during the live and also sold on a CD exclusively on the day of the concert at the venue. This CD genuinely brings together some dream collaborative tunes that I personally can’t wait to hear for myself.

The CD sold at the concert will cost 2,000 yen and will be a 2CD release with one CD compiling select songs from all the artists under the Evil Line Records label such as The Diamond Four from Momoiro Clover Z’s latest album, not just those performing at Evil Line Fes, while the second CD will bring together these brand new collaboration tunes crafted for the concert. Overall, 4 new songs have been produced for this event. The first is known as the The Three Musketeers Mic Relay and brings together The Dirty Dawg from Hypnosis Mic Division Rap Battle, the music creator guild artist group Gesshoku Kaigi and rap duo Cypress Ueno & Roberto Yoshino. Considering the rap focus of two of the artists involved in this tune and the name of the song, expect a rap battle-style song to come out of this collaboration.

Ryuujin-kun ga Daisuki Desu (We love Ryuujin-kun) will be a song that brings the Earphones, the three ex-members of Rock a Japonica and Kiyoshi Ryuujin. As you can guess from the name, it would appear that the song will revolve around the all-female Earphones group and ex-Rock a Japonica members professing their love for Ryuujin. Even as someone who has enjoyed the music of Rock a Japonica prior to their dissolution and as someone excited to see what their new group will look like… I have to be honest, this collaboration excites me the least.

The last two collaborations, by comparison, excite me the most. Comic Zasshi Nanki Iranai (I don’t need a comic magazine) is a collaborative tune bringing together rock group The Dress Codes, Tamai Shiori from Momoiro Clover Z and TeddyLoid together for a song. With such a strong trio working together for this song, you can bet I’m excited to see how this will turn out. The final song is the most exciting of them all for me, which may not be surprising to those who know me considering it brings together all the members of Momoiro Clover Z and another rock group, Tokusatsu, for a song titled Party wa Ima (The Party is Now).

For just 2,000 yen, this 2CD release including 4 brand new collaborative tunes and their off-vocal variants as well as 17 other catalog titles is a bargain, and its a shame its availability will be limited exclusively to this concert. Luckily, as someone who will be attending you can guarantee that I’ll be picking it up, but it’s a shame that many other people will end up missing out. After all, with such a strong lineup and such exciting collaborations being announced, I can’t wait to see the results of their labor.