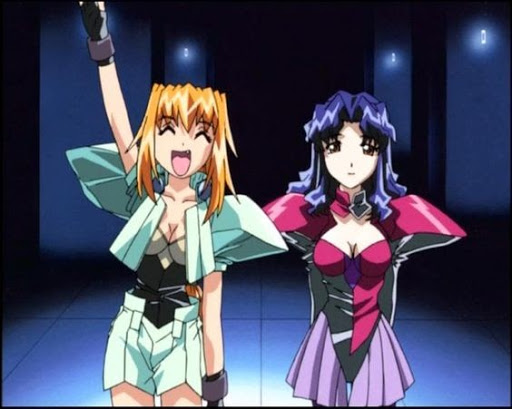 Excel Saga is not the first animated comedy about taking over the world.

But can Pinky and the Brain match up with Excel Saga in terms of pure surreal insanity and weirdness? Every time that Pinky tried to introduce some random silliness, the Brain always brought things back down to Earth again. There is no character in Excel Saga sane enough to prevent the story from going off in weird and unexpected directions.

Of course, the two shows are nothing alike. The two gene-spliced lab mice in Pinky and the Brain actually tried to make serious, if extremely satirical, attempts to take over the world. And many times, they came astonishingly close to accomplishing their goal. All their plans were carefully laid out by the Brain, and each one had a definite method of execution.

In the Excel Saga anime series, the characters can’t figure out how to conquer one city, let alone the entire planet. Any world domination plans — assuming that there are any for a given episode — are often half-baked, with the details left largely up to fate, or Excel’s fertile imagination. That element of randomness is a large part of what makes Excel Saga so much fun to watch.

In addition, Pinky and the Brain also never had Excel Saga’s (completely one-sided) love story — except in fanfiction stories.

In any case, Excel Saga occupies a unique niche in the world of manga and anime. There is really no other anime which can easily be compared to it.

It should be noted that there are major differences between the original manga and the anime.

The anime follows its own storyline, and this story largely ignores the plot of the manga. Some of the same jokes and gags are used — such as Excel causing chaos while directing traffic at a construction site. But, starting from the beginning of episode one, it quickly becomes impossible to compare the stories, or to use the manga as a guide to the anime.

The anime even makes a point of opening each episode with a note, allegedly written by Rikudo himself, giving the animators carte blanche permission to do whatever they want with the material.

Incidentally, the manga is quite good. The humor is similar to the anime, although it’s not quite as randomly frantic as the anime.

For example, in the manga, Excel’s initial meeting with Menchi is actually sort of touching, as she saves the dog’s life during a flood. The touching moment doesn’t last long as Menchi quickly realizes that her new owner is insane and might try to eat her.

Fortunately, the main characters remain the same in both versions, as does the basic focus of the story.

In either manga or anime form, Excel Saga tells the story of Excel, a recent high school graduate.

Excel is completely and totally dedicated to ACROSS, and especially devoted to Il Palazzo. It is never really explained how Excel got involved with ACROSS in the first place, but she is clearly in love with him. One gets the impression that if Il Palazzo owned a bookstore, she would be right there by his side, shelving books the wrong way and causing literary havoc.

ACROSS soon gains a new member, Hyatt, who is sickly and naive, and yet often more logical than Excel. The two minion girls make for an interesting contrast. Excel is energetic and enthusiastic, but frequently mentally unbalanced; while Hyatt is of sound mind, but clearly physically unwell. 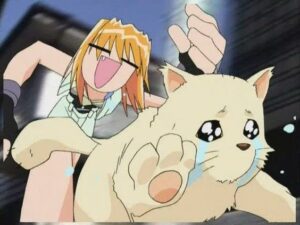 Both the anime and the manga also feature Menchi. This stray dog is adopted by Excel, who considers the poor pup to be an emergency food source. Menchi is the cutest character in the show, and even gets her own episode.

International audiences might be unaware that menchi is the Japanese term for a type of minced meat similar to hamburger; Viz Media’s English-language translation of the manga calls her ‘Mince.’ Menchi is understandably not happy with being potential food, and tries to escape often.

In the manga, Il Palazzo, Excel and Hyatt are eventually joined by another member, Elgala. Elgala is snobbish and doesn’t get along well with Excel.

Interestingly, in the original manga, Excel is a code name, and she refuses to give her real name to authorities, such as police or immigration officials. Her lack of proper ID becomes a plot point. In the anime, her real name is apparently Excel Excel.

With a few exceptions, almost every episode of the anime parodies a specific anime genre or movie style.

However, the first episode doesn’t really seem to parody anything in particular. Excel is given the task of killing the real-life manga artist, Koshi Rikudo (sometimes spelled Koshi Rikdo). The Fourth Wall is completely demolished, although not for the first time.

Hilariously, Excel doesn’t realize the significance of what she has done — killed her own creator — until after she has killed him. She grabs a manga page that Rikudo was illustrating, only to discover herself on it. (Oddly enough, Rikudo also didn’t seem to recognize his own creation when she entered.) The story has to be reset.

Although some episodes end back where the episode began with no apparent changes, the anime does have a story arc of sorts. For example, there are the alien Puchuus (or Puchus, or Puchu Empire). These cute little invaders make their first appearance in the second episode, and will show up in other episodes as well.

There is also a government organization dedicated to stopping ACROSS, known as the Department of City Security. Excel and Hyatt’s neighbors Watanabe, Iwata and Sumiyoshi get recruited into the department. In one episode, these three end up as part of Municipal Force Daitenzin, a Power Rangers/ Super Sentai parody.

In the manga, Sumiyoshi speaks with a thick Okayama accent. A footnote to the Viz translation of the manga states that the translator ‘suggested a ‘Northern England’ feel for Okayama.’ Sumiyoshi’s dialogue is written phonetically, as in ‘ye tek care o’ yeself.’ In the anime, Sumiyoshi doesn’t talk at all.

The series takes place in Fukuoka (‘F City’), Rikudo’s hometown, but only Sumiyoshi has a noticeable accent. ‘Nearly every one in Excel Saga talks in a standard Tokyo accent,’ the Viz footnote states.

No review of Excel Saga would be complete without special mention of the anime-only character Nabeshin. Nabeshin is voiced by the director of Excel Saga, Shinichi Watanabe. The name comes from combining Watanabe and Shinichi.

In the series, Nabeshin dresses a lot like Lupin III, although some have also compared him to Cowboy Bebop’s Spike Spiegel. (Spike was created by Shinichiro Watanabe, not the same person as Shinichi Watanabe, and was influenced by Lupin.)

In general, Nabeshin tends to be the coolest character in the series, even if he has little or nothing to do with the main plot of the story. His scenes involve a lot of guns, gadgets and action.

Watanabe has also been known to cosplay as Nabeshin, including the afro.

The Great Will starts out as a gag character. The Will shows up for the first time in the first episode, when Excel rushes out into traffic and gets herself killed. The Will saves her from her own stupidity.

The Will can rewind and reset the universe back to the way that it is supposed to be. Unfortunately, Excel Saga is so random, and so prone to getting people killed, that the Will has to get involved many times.

This becomes a running gag, and leads to the Will of the Macrocosm becoming an actual character in the story.

Because Rikudo is from Fukuoka, it is thought that the organization ACROSS is named after ACROS (‘Asian Cross Road Over the Sea’) Fukuoka Prefectural International Hall, a multipurpose cultural center in Fukuoka. It’s a neat-looking building, especially since they added rooftop gardens all over it.

Hotels near ACROS include the Hakata Excel Hotel Tokyu, Grand Hyatt Fukuoka and Hotel Il Palazzo. Elgala is the name of a meeting hall in Fukuoka.

Sumiyoshi is a neighborhood in Fukuoka. The Hyatt is in Sumiyoshi, for what it’s worth.

A pair of minor characters, the sexy androids Ropponmatsu and Ropponmatsu II, share a name with another neighborhood in that same city.

An anime adaptation ran from October 1999 to March 2000. The adaptation includes 26 episodes. The 26th and final episode was deliberately designed to be too violent and obscene for TV Tokyo, the broadcaster. Just in case that wasn’t enough to get it kicked off the air, it is also one minute too long to fit into a normal timeslot.

In 2002, ADV Films released an English-language adaptation of the series on DVD in North America and the United Kingdom. Madman Entertainment holds the license in Australia and New Zealand.

The English dub features Jessica Calvello as Excel for the first 13 episodes. She had to be replaced by Larissa Wolcott after she strained her voice.

Funimation acquired the license, and released Excel Saga: Complete Series in 2011. It comes with four DVD discs and is available at Amazon. Depending upon when you read this, The Imperfect Collection may still be available on eBay. It includes six DVD discs.

As far as we can tell, the main two differences between the box sets are the box art and the number of episodes squeezed onto each disc. There is no Blu-ray edition.

Excel Saga, including the infamous episode 26, is available at Funimation.