OTAQUEST supporter, anime fan, and performer EXILE NESMITH recently had the chance to tour the J.C. Staff offices and sit down with YUJI MATSUKURA about their recent hit work, Hi Score Girl! In the rather candid interview below, the two discuss nostalgia surrounding arcades, the feeling of being part of a generation that’s seen so much technological advancement, and also the process of developing a series like Hi Score Girl for animation. We present their conversation below, translated in English, provided in collaboration with Monthly EXILE magazine! 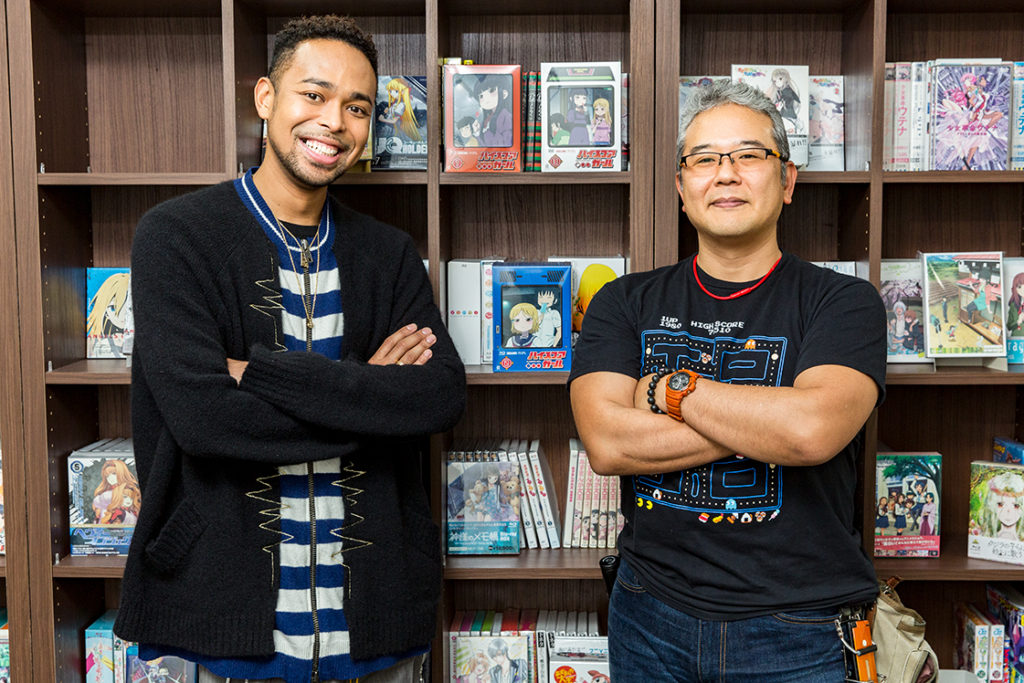 NESMITH: What an incredible tour of J.C.STAFF’s offices that was.

NESMITH: Yeah, it was just plain fun. It’s not every day you get to see the process and all the hands required to get what we watch on TV made. The atmosphere was so tense, I couldn’t help but wonder if I should have stayed out.

YUJI MATSUKURA: Our staff count is top-class in the industry, so we can do everything that isn’t editing and sound design in-house. Few companies go this far.

NESMITH: And I looked over that mass of people thinking about how each of them must have a dream that brought them here. There were your directors guiding the process, character designers drawing, and they all have goals for the future.

YUJI MATSUKURA: They’re all experts that work to polish their own specialty, but their future isn’t that clear cut. Not all artists can become directors, and at times you have producers like myself that get into directing. It can be rough for some people: those that find something they want to do can go far, but those that don’t may end up fading away.

NESMITH: Now that I know how many people it takes to make anime, I’m liable to watch it sitting up straight like I’m in a lecture or something.

YUJI MATSUKURA: Instead of multitasking or fast-forwarding, then. (laughs) I make a wide variety of anime. My hope is to make anime that doesn’t fit into stereotypes, and I hope you can enjoy that aspect. 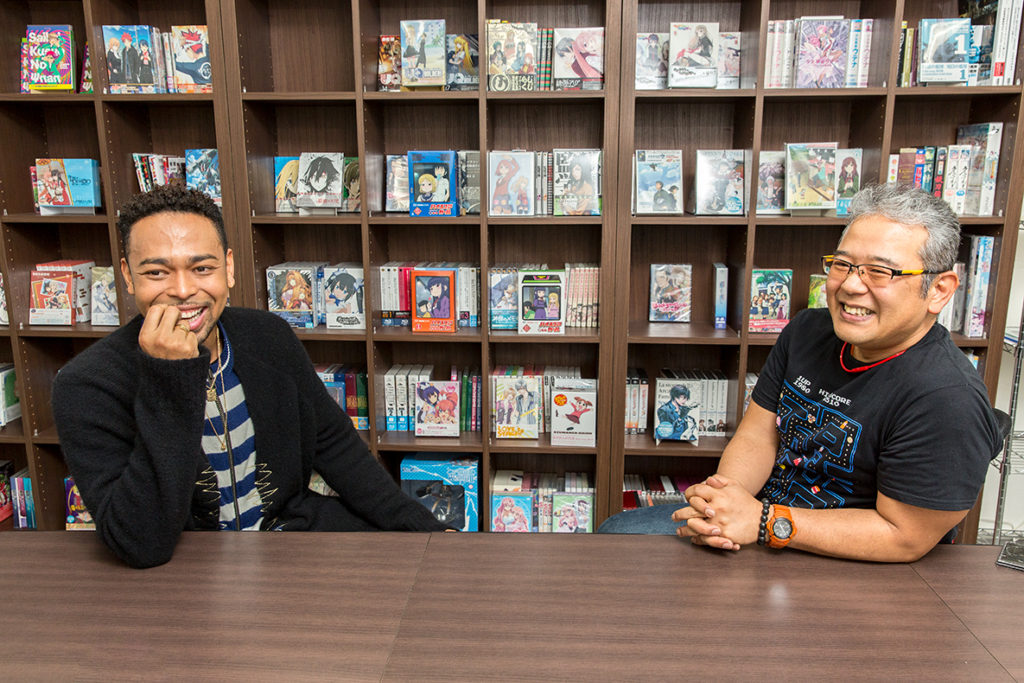 NESMITH: Which brings us to our main topic, “Hi Score Girl”. I felt it was really fresh take, even coming from J.C.STAFF.

YUJI MATSUKURA: Right. Romantic comedies may be a staple for anime, but to begin with, this project is fully 3D CG. Then there’s its subject matter, retro games. Not that they’re retro to me! I’d say they still have mainstream appeal. *laughs*

NESMITH: I’m with you on that. *laughs* I’m from that generation, too.

YUJI MATSUKURA: I love games so much there was a time I worked in the game industry, so this was something I was desperate to work on.

NESMITH: Were you thinking about having it be entirely 3D CG from the start?

YUJI MATSUKURA: No, we thought we’d be doing it by hand. However, considering the 3D CG technology we have available to us now and the visuals we wanted to bring to the series, this is how things turned out. We thought 3D would be best for the characters and in particular the arcade cabinets, and we had to convince the director and maker to bring them on board.

NESMITH: It’s true, the games that appear in the series feel just like they did back in the 1990s.

YUJI MATSUKURA: It took a lot of work to get the cooperation necessary for it, but we wanted to make every reconstruction 100% accurate. The arcade cabinets were modeled with extreme precision, and game visuals were recorded straight from the real software. 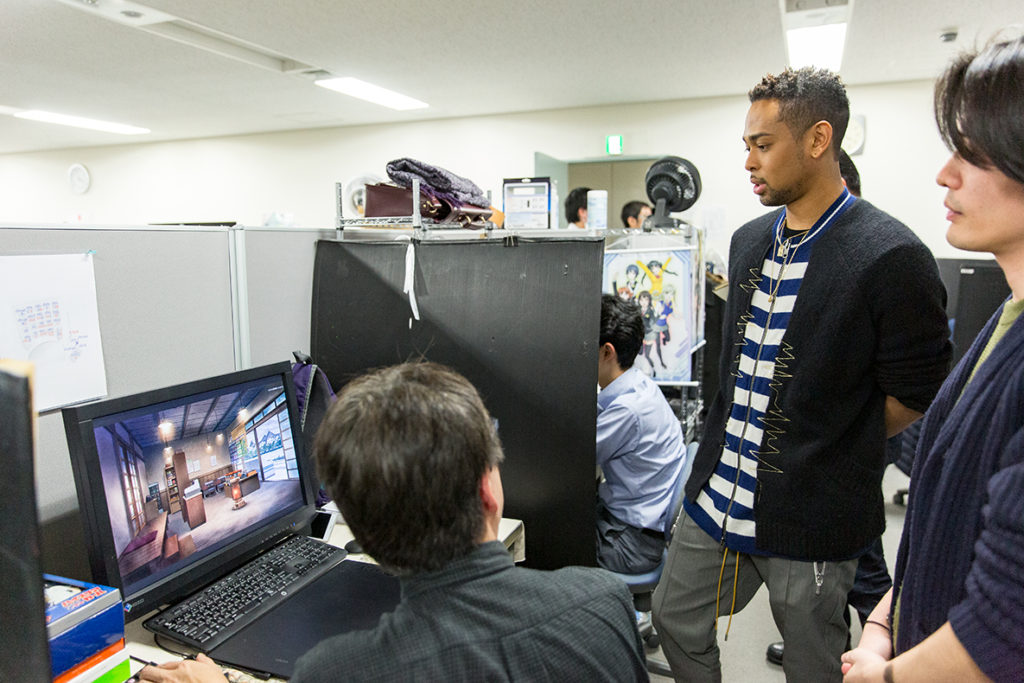 NESMITH: The materials for that caught my eye when we were touring the studio, and wow, I could watch that all day! Like, “Hey! I remember that!” *laughs*

YUJI MATSUKURA: Even the money exchanging machines were real models, that really brought people back. *laughs*

NESMITH: I’m turning 36 this year, but when I was in elementary school I went to my local Daiei complex for karate and swim lessons. They had an arcade on the second floor that I’d often swing by to play at. For our generation, that was just normal life, so Hi Score Girl gives you moments of “that’s how it was back then!” It’s a thrill to watch.

YUJI MATSUKURA: My generation had “Space Invaders”. We even had a Space Invaders table cabinet in our own home, and I played it so much that my parents threw a fit. *laughs*

NESMITH: My first experience with video games was as a first-grader in elementary school, I think. I asked for a Famicom, and played arcade games outside, too.

YUJI MATSUKURA: What a fun age that was. People call our generation “spoiled”, but we certainly did get to see the birth and evolution of subculture elements like video games and anime.

NESMITH: No kidding! We also saw music go from cassette tapes to mini-CDs to MiniDiscs and then the iPod, so we’re in the best position to talk about the changes and evolution back then since we experienced it first-hand.

YUJI MATSUKURA: Hi Score Girl has that era as a background, with the games changing each year that passes.

NESMITH: Reading the original work, I could match up the advent of certain arcade games with other events. It’s incredible to think how much work went into what is essentially the background of the manga.

YUJI MATSUKURA: Many anime series just slap a white glow on the arcade screens, but that wouldn’t be right for us. The cabinets in the arcades we grew up with all had demo screens inviting you to think about what to play next. So, we tried to go all-out with this anime. 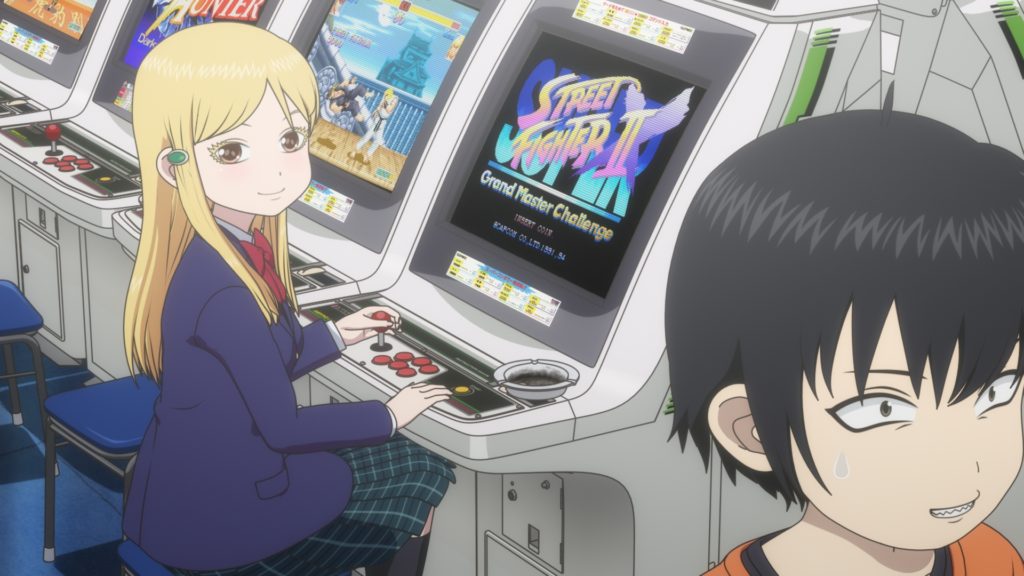 NESMITH: It must have been a great challenge to get all that source material. Were some of the arcade games you wanted to put in no longer available?

YUJI MATSUKURA: Yeah, certain ones were. *laughs* But there are some fanatics out there that hold onto the original hardware of arcade games…

YUJI MATSUKURA: It was actually harder to get the designs of arcade cabinets. Not many of the cabinets from 30 years ago remain physically, so I searched Akihabara and elsewhere, and had to buy some cabinets from junk dealers. That didn’t sit well with my wife. *laughs* They’re as big as refrigerators, after all.

NESMITH: The cabinets were certainly large.

YUJI MATSUKURA: I also bought a Sega Astro the other day. Haven’t told my wife yet. *laughs*

YUJI MATSUKURA: As with music, the things we treasured as children stick with us for the rest of our lives, I think. That’s why when chances like this arise, I want to give it my all.

NESMITH: To share all that life-changing fun you had as a kid. Music’s the same. If you’re going to work hard on something, make it something you love.

YUJI MATSUKURA: Incidentally, have you read the final issue of Hi Score Girl?

YUJI MATSUKURA: Ah, then I won’t spoil it for you. *laughs* It’s a great story.

NESMITH: I’m the kind that buys manga after it’s collected into a tankoubon volume (next edition comes out March 25th). This series has a really tragic story. As for the anime, episode 14 is particularly great. There’s a scene where characters from games give the main character encouragement, and I think that’s something kids really do feel.

YUJI MATSUKURA: These are fictional characters giving encouragement to a fictional character, but it moves us. That’s one great thing about anime and subculture as a whole, I think. We ought to be finding stuff that moves us in the real world, but fictional narratives and exchanges move us. 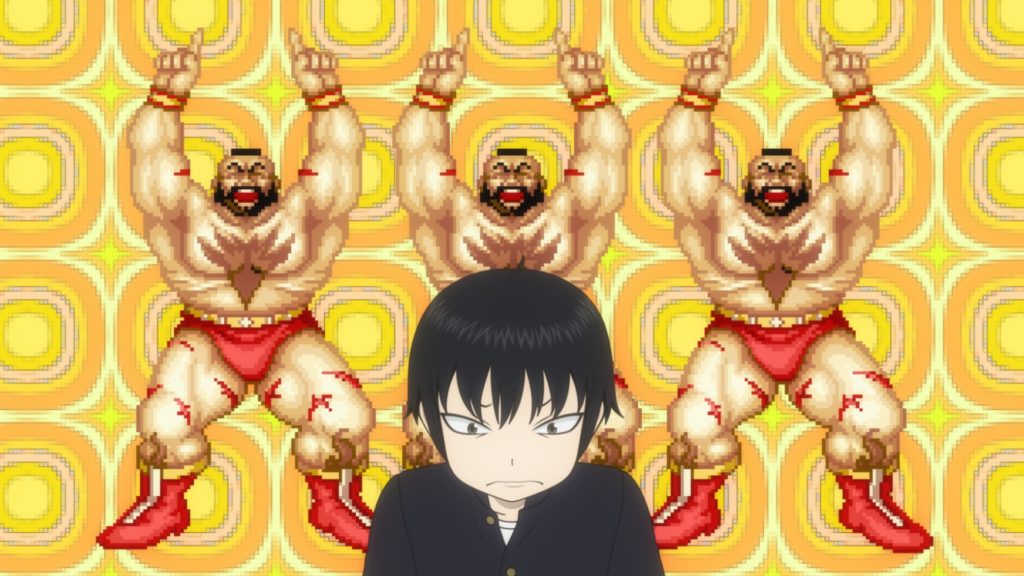 NESMITH: Can we expect a second season for the TV anime?

YUJI MATSUKURA: We’ll be announcing it by the time this article is published. It’s a happy thing, being able to take an anime series to its source material’s conclusion.

NESMITH: Then you must have had some powerful feedback while broadcasting.

YUJI MATSUKURA: The reaction was certainly huge. People from all walks of life responded. People outside of Japan, too. After all, Japanese games have a big following outside of Japan. And I think this was the right time for this series, too. Had I been just a few years older when we got around to this, I might have viewed myself as too old to do this series justice.

NESMITH: With e-sports catching on, modern views of games are really changing. I’d love for people to watch Hi Score Girl and discover how games got to be as they are now… This really is up my alley, isn’t it? *laughs* Anyway, we’ve talked a lot about Hi Score Girl so far, but as a producer, what do you emphasize as important in your work?

YUJI MATSUKURA: Y’know, it takes all types, but I think I’m one of our industry’s outliers. I get to choose the director, cast, writers, other staff members, and set each of my projects in motion. I call myself a producer, but my main work isn’t gathering funds, but rather thinking about how to model each project. For instance, whether or not to make a pure and simple romantic comedy, or whether other elements should be introduced… I mull things over and call the shots so that the staff has a clear goal to work for. My role is to arrange source material into a project for us, assign staff that can see it through, and coach them.

NESMITH: So you know your staff well enough to understand how their personal tastes match a project?

YUJI MATSUKURA: Right. I also propose ideas that go against the grain to keep everyone open to new options. That’s another form of arrangement. 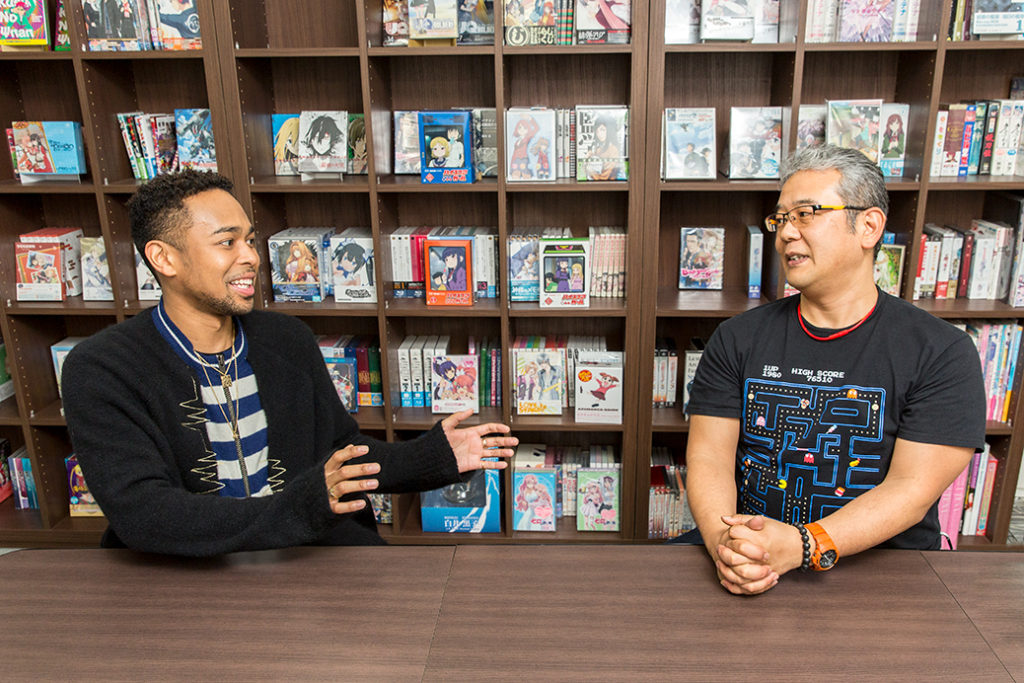 NESMITH: Sounds like… what HIRO does for our group, EXILE THE SECOND. There’s EXILE, SECOND, and its third generation, but HIRO was the one to provide us direction, and we’d bounce ideas to him that he’d pass back with his own spin on them. He stands at the center, uniting our team so that we can do great things. Sounds similar.

NESMITH: From your viewpoint, what makes anime so likable?

YUJI MATSUKURA: Each series should something that makes it interesting, and I think it’s our job as anime staff find out how to draw that element out. However, there’s always that sense of entrepreneurship, to scrub out the fun niche-ness for something that can appeal to everyone. The best projects put that aside and focus on what makes them interesting. Works that pander to all audiences tend to end up feeling generic, with generic visuals and checklists, and one of my goals is to keep that at bay. That requires a degree of flexibility, of course. I’ve been in this business for over 25 years, but I’m not ready to lag behind our young staff.

NESMITH: Well, this has all been great fun. I am extremely thankful to have the chance to speak with someone responsible for one of my favorite things, and it deepens my appreciation for these series. I’m reminded of how this passion is necessary for my own line of work.

YUJI MATSUKURA: Work on Hi Score Girl’s second season in October is underway, and I hope you’ll look forward to it.

NESMITH: I certainly am! 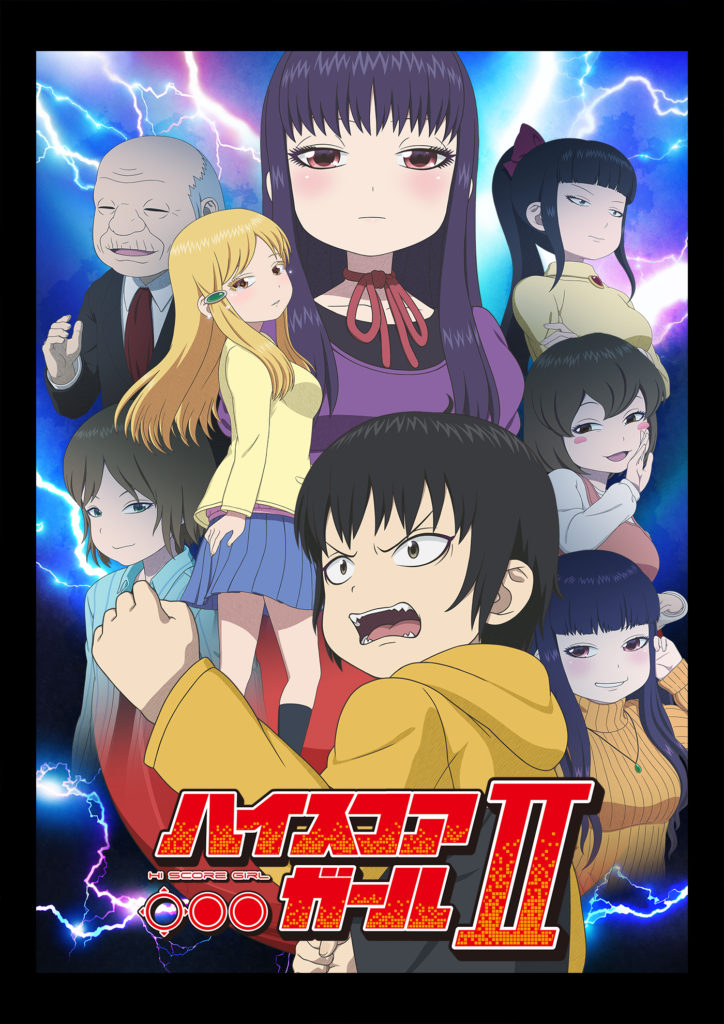 We would like to thank J.C. Staff and Mr. Yuji Matsukura for participating in this interview, and to Monthly EXILE magazine and EXILE NESMITH for conducting it! Season 1 and EXTRA STAGE of Hi Score Girl’s anime is currently available to stream in full on Netflix, and season 2 of the series is coming later this year!