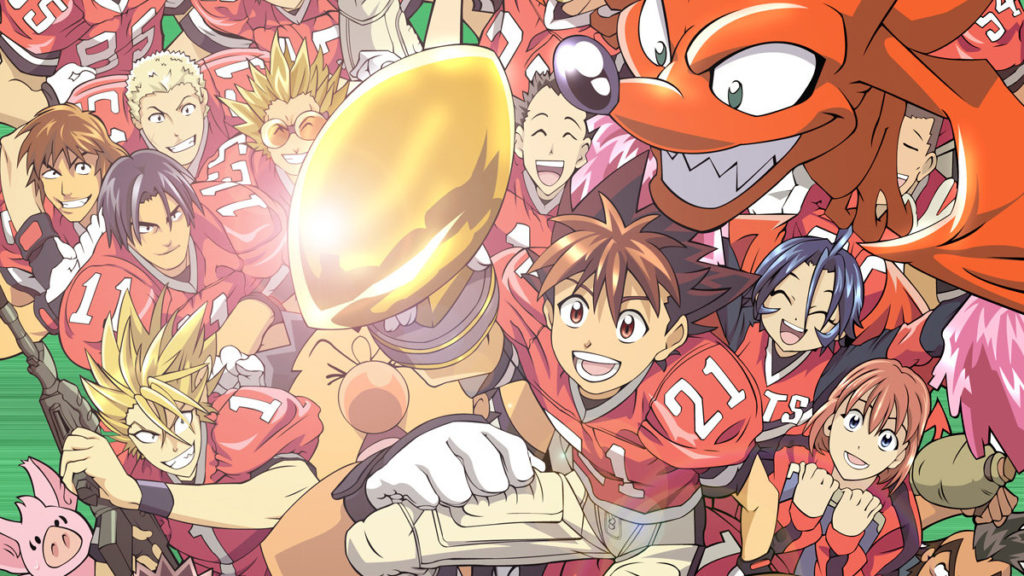 Eyeshield 21 might be the most underrated sports manga of them all, at least stateside where sports series didn’t become more popular until the 2010s. This series ran in Weekly Shonen Jump from 2002 through 2009 and from start to finish this underdog of a series won everyone that took the time to read it over. Yes, it’s about American Football which is maybe the most unlikely sport to get a manga adaptation, in Jump no less, but we promise it’ll defy your expectations.

Part of why Eyeshield 21 is so so good is the creative team behind it; The writer-artist combo of Riichiro Inagaki and Yusuke Murata were a match made in heaven. Do those names sound familiar? They should, but even if they don’t you know what they’ve done.

Riichiro Inagaki has made a big comeback these last couple years with the science-tastic Dr. Stone and Yusuke Murata is the one of a kind artist behind One Punch Man. Eyeshield 21 was the series that really put these guys on the map, and if you like their later works you should give this American Football excursion a shot.

Yusuke Murata really discovers the illustration talents that made One Punch Man such a success while working on Eyeshield 21. The first few volumes of the manga look pretty rough but as it goes on you can see Murata getting better in real-time.

Games start to become kinetic, all of the action looks like its happening in real-time despite being static black and white illustrations on a page. There’s a real sense of flow and impact to the art that Murata would capitalize even further on in One Punch Man.

Even if an American Football manga doesn’t sound like it would be your bag, it’s fascinating to see these techniques develop in real-time.

Unfortunately, the Eyeshield 21 anime never finished the story, although it lasted a solid 145 episodes so it must have done something right! While, bluntly, we think Yusuke Murata’s original manga art is the preferred experience, the anime can’t be ignored either.

One interesting thing that was done with the show was how it premiered in The United States; Before Netflix and Crunchyroll were household names in anime streaming, Toonami tried their own hand at anime streaming a decade and a half ago with the short-lived Toonami Jetstream. Eyeshield 21 was one of its main titles but that’s not the only place you could find it.

The show also streamed on nflrush.com, the official NFL kids’ website. Can’t name another anime that’s aired there, can you?

The Eyeshield 21 Characters Are Our Favorite Team

Eyeshield 21 probably has the most charming cast of characters in any sports series. From the Devil Bats mainstays to opposing team titans like Shin, Agon, and Riku, one of the aspects that makes this football manga such a delight is how animated and full of personality its denizens are.

Even if you didn’t have one of the best manga artists in the world bringing these guys to light, Inagaki infuses them with so much personality that you’d love them nonetheless. The idiot Monta, Manabu who’s trying to break out after a life of study, and the gruff but lovely Musashi, everyone brings their own brand of charm to the table.

Of course, there’s a couple of characters we have to properly introduce.

Sena Kobayakawa is Eyeshield 21, maybe. He wears the magic number and while he was never particularly interested in athletics, after being the class errand boy for years he’s naturally developed into a top runner. After being headhunted by Hiruma, he quickly became one of the most talented running-backs in the high school league.

With each game he plays, he falls more and more in love with American Football and develops quite a reputation along the way. Of course, pretending to be a legendary player who trained extensively in America helps. Not that this fabrication was Sena’s idea… 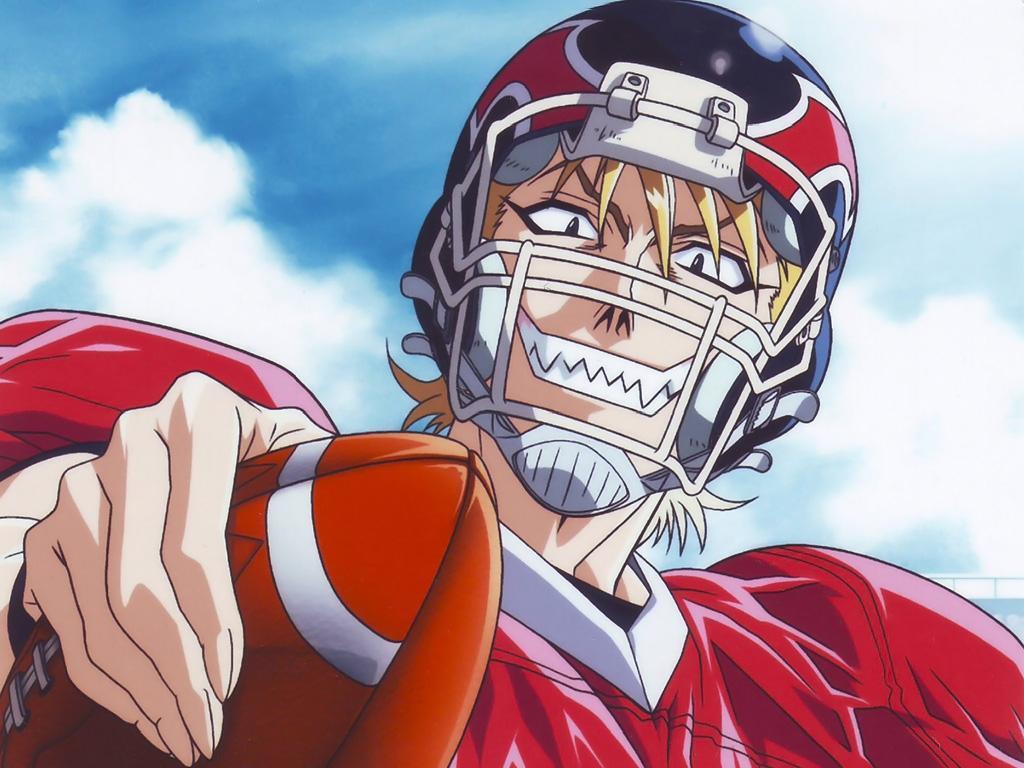 If Sena’s the heart of Eyeshield 21, the character that makes you fall in love with football as much as he does, Hiruma’s the soul of the series. Of course, not all souls are pure and Hiruma’s proudly as twisted as someone who’d name his team ‘The Devil Bats’ might be.

While he would never cheat during a game, he’s never above using underhanded tactics when it comes to recruiting players and getting audiences to come to his game. He did pretend newbie Sena Kobayakawa was the legendary Eyeshield 21 after all. You come to realize he only goes through the trouble because he loves football and wants to play it more than anybody.