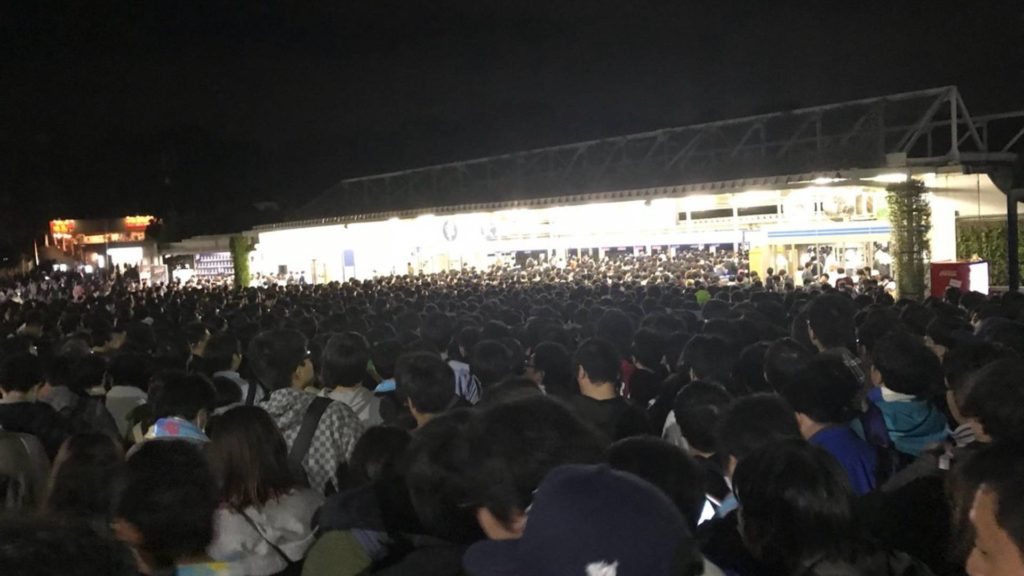 When you’ve just spent four hours sweating buckets at a concert, just about the only thing you want to do is have a bath and go to sleep – not get stranded in the middle of nowhere. But that’s exactly what happened to many fans of the [email protected] series who went to one of the franchise’s concerts last weekend.

Saitama prefecture’s MetLife Dome played host to the sixth annual [email protected] Cinderella Girls (or Deremas) concert, and while this may have been one of the biggest venues for the franchise yet – with an overall capacity of around 36,000 people – it certainly seems as though the public transport system was not prepared at all for the mass of people that were to descend upon it.

That being said, arrival at the venue went very smoothly for fans, as people tend to arrive at different times depending on if they want to purchase goods before the live or not, but it was after the live that true chaos descended on the station, as the whole stadium poured out at the same time towards Seibu Kyujou-mae station, all tired and all wanting to head home after a fun, yet no doubt exhausting live event.

The sheer mass of people quickly overwhelmed the station, and far from the crowd thinning once the trains started departing, it only grew – leading to some truly “hellish” scenes being posted on social media.

It’s unclear what the problem was, as the station staff had clearly done what preparation they could beforehand, having put out fences to funnel the crowd towards the entrance gates, but the sheer mass of people quickly shut down the entire station. This also lead to two of the lines that pass through the station, the Seibu Yamaguchi and Sayama lines, to have to cease operations entirely, which led to trains further back along the line to be delayed considerably. According to some fans who were waiting towards the back of crowd, it took nearly an hour and a half for them to get home from the end of the live – and that’s to say nothing of those who were further along the line than them who simply wanted to get home from work on that Friday night!

Regardless of why this abject failure on the Seibu railway company’s part happened, it’s clear that the organizing staff for [email protected] concerts, and concert staff, in general, will have to seriously consider whether or not to use the MetLife Dome again for their events. It’s simply something that shouldn’t be happening, especially when downtown Tokyo can function so well despite far more people being concentrated in the stations during rush hour. As one Twitter user put it, “[email protected] may be the best, but Seibu Kyujou-mae is the worst!”.

A Dream: What’s The Deal With Idolmaster Cinderella Girls?

Million Live Anime: Why [email protected]’s First Foray Into 3D Could Be Great