‘Fate/stay night’ Teams Up With the Japanese Racing Association 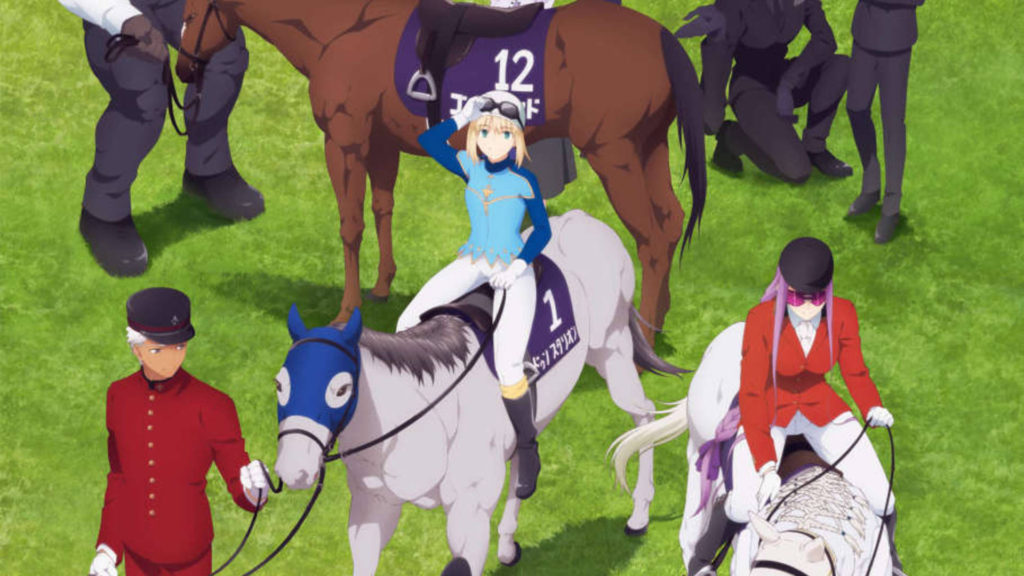 If there’s one thing that the Fate series loves even more than swords, it would have to be horses – after all, it has an entire Servant class dedicated to heroes who rodes things (mainly horses). And with the latest Heaven’s Feel movies focusing on Servant Rider and her master, perhaps it makes sense that the franchise would team up with none other than the Japanese Racing Association (JRA), who organize horse races across the entire country.

The JRA unveiled their new collaboration website with the Fate series, called ‘SERVANT/KEIBA’ (literally ‘Servant/Horse Racing’), yesterday. The website forms part of the series’ advertising campaign for the upcoming release of the second part of the Heaven’s Feel film trilogy, Fate/stay night: Heaven’s Feel II. Lost Butterfly, and beyond the absolutely killer key visual of various characters from the series enjoying riding horses, there’s lots of fun stuff for fans of the series to get their hands on. First up is the return of the highly popular Run! Run! Lancer game that launched last year to promote the release of the first Heaven’s Feel movie, this time featuring Rider chasing True Assassin instead of Lancer. Not much has changed beyond the fact that it features Rider, well, riding a horse, but the game proved very popular with fans last year due to its addictive gameplay and excellent graphics by developers Ladybug.

Next up is a more original project called Escape from Racecourse which involves the player solving a mystery alongside characters from the series to, well, escape from a racecourse. Players who manage to complete the game will receive a special phone background, as well as the opportunity to enter into a competition to win some prize money, provided that you follow the JRA’s official Twitter account. This prize money is also available to those who clear Run! Run! Rider – but that’s a much more difficult to accomplish.

Furthermore, at the JRA’s home of Nakayama Racecourse in Chiba, there will be a special booth operating as a “photo spot” for fans to celebrate the collaboration campaign. Plus, the first 1000 people who make it to Nakayama will receive a special lanyard themed after the collaboration starting on December 9 – so it’s worth making the trip if you’re a fan.

Horse racing is a pretty big past-time in Japan – or rather, betting on horse races is – so Fate teaming up with the JRA is a pretty big deal. Not that they particularly need the publicity though, as I’m sure that fans of the series will be turning out in droves to see the next installment in the Heaven’s Feel trilogy anyway.

You can check out all of the things outlined above via the official collaboration website. Happy riding!