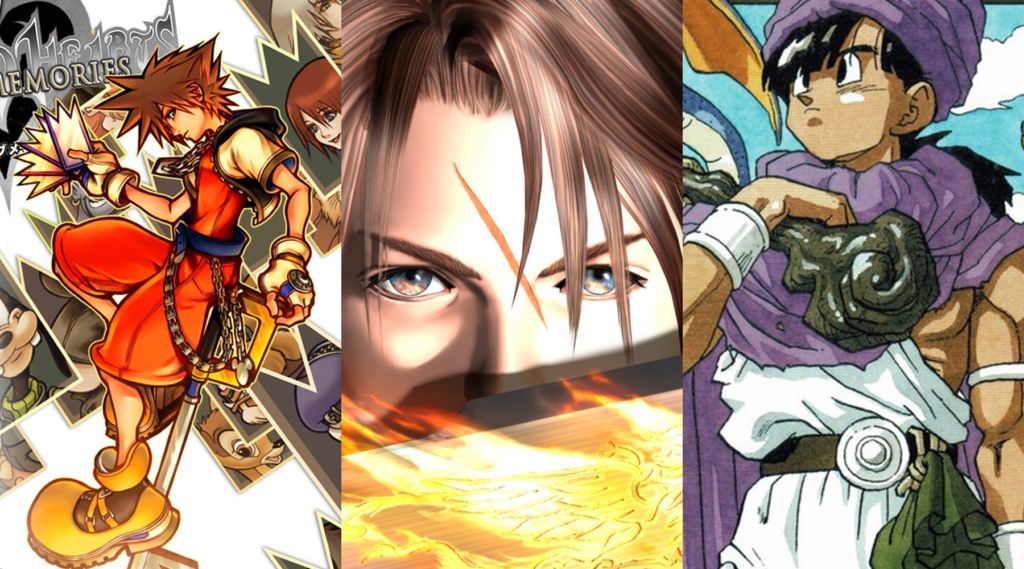 SQUARE ENIX finally gave into a small but dedicated contingent of fans via developing and release NEO The World Ends With You, and that has us thinking about the premiere Japanese Role Playing Game developers. The merging of Final Fantasy’s Square Soft and Dragon Quest’s Enix still feels abnormal to the oldest of heads, but most gamers have embraced the phrase ‘SQUARE ENIX RPG’.

That said, did you know that the series you embrace the most reveals a lot of about you? Check out your RPG fortune here.

Yes, we put Squall instead of Cloud in the middle of the feature image. What are you gonna do about it?

For a throwback SQUARE ENIX RPG series, you appreciate Bravely Default for its small charms and nuanced battle system, and you definitely aren’t just sour-grapesing over Final Fantasy VII being the dominant game in that series.

When you hear somebody recommend Chrono Trigger as a JRPG masterpiece, you know in your heart they either never bothered playing Cross or gave up in the very beginning. It haunts you more than that fact that we’ll never get a third Chrono game.

You were probably born in Japan in the late 1970s, spending hours plugging away on your Famicom and then Super Famicom. If you’re a recent Dragon Quest convert, what with the most classic of classic Japan role-playing games finally finding its footing internationally in the last few years, we applaud you.

That said, you should ask yourself if it’s really your favorite SQUARE ENIX RPG, because no one finds you’re cool for thinking so stateside.

If this is your favorite SQUARE ENIX RPG line, then there’s no way you haven’t lied to somebody about what your favorite Final Fantasy game is.

Depending on who you’re talking to, you’ve said ‘actually Final Fantasy 6 is the best one’ or ‘secretly, Final Fantasy 9’s where it’s at’ because you don’t want people to know you cried like a baby playing Final Fantasy X. More than once.

Nobody understands Kingdom Hearts fans more than other Kingdom Hearts fans. It may seem infantile to play hopscotch with Goofy from the outside looking in, but you’re certainly not into this SQUARE ENIX RPG series for the Disney. Hell, by now you haven’t been keeping up with its insane story for 20 years for the Final Fantasy either.

Instead, you stay because you heard a melodramatic Hikaru Utada song during the final cutscene when you were 14 years old, and you’re stuck forever.

You’re firmly holding onto the hope that someday someone somewhere will hear what you have to say about the Seiken Densetsu series and why it’s actually the best SQUARE ENIX RPG family.

However, even you started to lose track of which edition of which port of which remake’s the ‘actual good one’.

You played a game called Star Ocean Till the End of Time for the Sony Playstation 2 when you were 14 years old and you never dared to play any other Star Ocean game ever again.

You typed ‘geno in smash when’ in the last 24 hours.

9. The World Ends With You

Years of pleading with anyone who’d pay you the time of day to ‘Play TWEWY’ have finally payed off! Just two weeks out from the release of its first proper sequel, NEO Twewy, the game finally graduates into being a proper SQUARE ENIX RPG.

Now only if people cared about it on its own terms, and not how it connected into other Tetsuya Nomura projects.

We are betting that you didn’t know they rereleased Valkyrie Profile Lenneth, the Enix legacy game, on mobile a few years back.