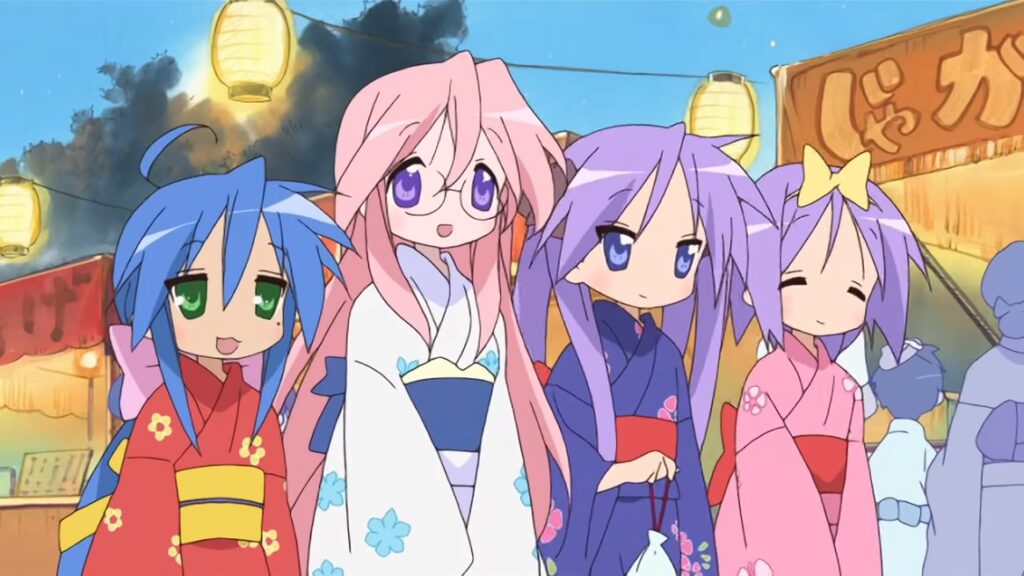 By all rights, summer ought to be festival season.

For one thing, it’s the hottest, most uncomfortable time of the year, when people are looking for excuses to cool off in the evening. Also, kids have free time while school is off. (School schedules and the weather are somewhat different in the United States and Japan, but the basic principle remains the same.)

Those two factors help explain why, under normal circumstances, there usually should be a lot of festival-type events planned for summer.

In Japan, or in parts of the United States with a large Japanese American population, that could be an Obon festival and Bon dance, or it could be some other festival or matsuri with fireworks, floating lanterns, etc.

For an anime series, a festival episode is sort of the equivalent of a Halloween, Thanksgiving, or Christmas episode in the United States.

A good festival episode should have some, if not necessarily all, of the following:

The following festival anime episodes aren’t substitutes for the real thing, but they will make you feel that summery festive feeling.

Lucky Star has several episodes which could count as festival episodes. The girls attend festive events at several different times of the year. These include their school’s athletic festival, a New Year’s festival, and the school cultural festival (bunka-sai).

However, if it’s a summer festival you want, Episode 5 is a really good one. Of course, to really enjoy it, you have to appreciate Lucky Star’s Seinfeld-esque ‘show-about-nothing’ style of observational humor.

There are jokes about shave ice, goldfish scooping, and tying the obi on summer yukata. Konata notes that a summer festival would set off flags in a dating sim.

Konata’s cousin Yui gets some of the best jokes. She thinks the other girls are older than Konata is.

Konata thinks Yui ought to be really good at the shooting gallery, because she’s a policewoman. It turns out she’s not good at it, and she gets dragged away by another police officer for goofing off while on duty.

There is also a fireworks festival in Episode 20. This episode gets a lot of laughs by having the girls take a commuter train to get there. Konata can’t reach the straphanger strap without the sleeve of her yukata falling down. Tsukasa gets trapped in the station’s automatic exit gates.

Tenchi Universe was always one of the sillier versions of the Tenchi Muyo! franchise. Naturally, they would have a goofy and weird festival episode.

Episode 7, titled No Need for a Carnival! in English, gets a lot of mileage out of its multiple superpowered alien girls misunderstanding or misinterpreting Earth festival and carnival traditions.

It starts out relatively normal. The Masaki Shrine is having its annual fair. Ironically, even though Tenchi Universe is a slapstick harem comedy, this is one of the few rare anime series to actually acknowledge the religious roots of many Japanese festivals. After all, the Masaki family members are supposed to be caretakers of a Shinto shrine.

At the beginning of the episode, Tenchi’s grandfather performs a religious ritual at the shrine. (It’s probably not related to Obon, because Obon is Buddhist.) After that solemn moment, the episode switches gears. Tenchi takes Sasami to the carnival. Sasami is Juraian royalty, not human, so she doesn’t wear a traditional yukata. She’s wearing the alien equivalent.

The other girls seem to get more into the Earth spirit. Although, because they’re running various stands at the carnival, most of them wear happi coats, rather than yukata.

Ryoko has her own take on the goldfish scoop game. But her fish tank, like a TARDIS, is bigger on the inside, and the fish are huge.

Ayeka operates a shooting gallery with little Ryokos as the targets. She enjoys shooting the Ryokos so much that nobody else can get a chance.

Mihoshi and Kiyone run a yakisoba stand which runs out of food, thanks to tiny Ryo-Ohki’s big stomach.

It gets sillier from there, but the episode does make fun of just about every typical festival element.

I almost hate to mention The Melancholy of Haruhi Suzumiya’s festival episode, because watching it requires diving into the mess that was Season 2’s Endless Eight. But you only have to watch one episode to see the festival part.

The reward is, you get to see Mikuru, Haruhi, and Yuki in yukata. Apparently, they don’t have yukata in the future (a commentary by the writer on losing traditions, perhaps?), and Mikuru has to buy a new one.

The SOS Brigade goes to the local Obon festival. The episode captures the spirit of Obonodori really well, and folk music and taiko drums can be heard in the background throughout the scene.

Haruhi is a genius at goldfish scooping. Yuki buys what looks like a generic Ultraman mask. Narrator Kyon remarks that she connects with it as an alien.

Somehow, Yuki manages to hold her popgun backwards at the shooting gallery.

After the festival, they eat takoyaki, and shoot off some fireworks. It’s a nice scene, and it’s only the repetition of it which ruins the episode.

Episode 14 of Azumanga Daioh is a twofer: it’s both a beach episode and a festival episode. The style of comedy is very similar to the Lucky Star festival episodes, although perhaps a tad more cute.

During a vacation to Chiyo’s summer beach home, the schoolgirls and their teachers go to a local festival. They make an absolutely huge group with Chiyo, Osaka, Tomo, Yomi, Sakaki, Kagura, Yukari, and Nyamo all in yukata.

Some of the girls aren’t used to wearing yukata, and Tomo reveals that her family likes the spinning ‘obi-mawashi’ meme. Sakaki is horrified at the implications of having ‘killed’ a stuffed cat at the shooting gallery.

And Chiyo and Osaka learn that while turtles are cute, you don’t really need them.

Both Keroro Gunso (Sgt. Frog) and Pokémon have come up with their own ondo in the style of traditional Obon and other Japanese folk dance. They’re both ridiculously cute.

The Pekopon Invasion (Shinryaku) Ondo is used as the second ending for Sgt. Frog. The lyrics sound a bit weird, but the humor of it is somewhat similar to the first opening song Kero! and March: the march sounds triumphant, but it is actually about minor inconveniences.

The Pekopon Invasion Ondo sings about alien frogs coming to invade your neighborhood; and also about dancing to forget your troubles.

The Pokémon Ondo was the fourth ending theme song to the first Pokémon series in Japan. If you watched the 4Kids version of the show, you wouldn’t get to see it, presumably because the Japanese lyrics would confuse American kids. The lyrics pretty much just celebrate Pokémon.

For some reason, the Pokémon Ondo began showing up at real-life Obon festivals a few years ago. At least it did in California and Hawaii; I don’t know about other places.

Speaking of real-life Obon festivals, uncertain times force people to come up with creative ways to celebrate without gathering in person.