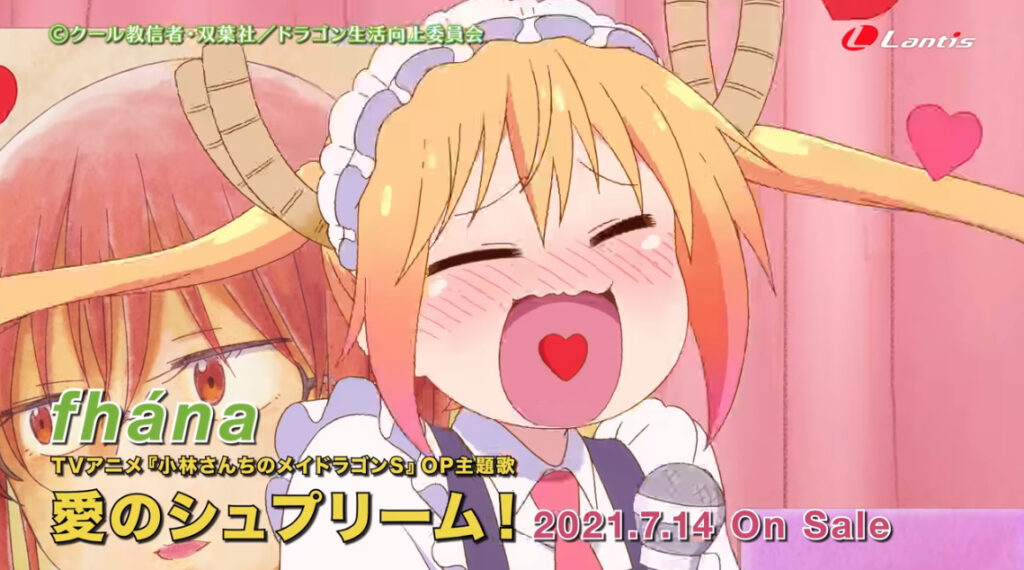 If you’ve been eagerly waiting for the second season of Miss Kobayashi’s Dragon Maid like I have, these short little bite-sized videos from J-pop band fhána will make a nice appetizer. The YouTube clips are for the series’ new OP, ‘Ai no Supreme!’

The videos are only about 15 seconds each, but they show that the cute and funky song will be perfect for the comedy anime series:

These videos serve as both a PV for maid dragon Tohru and her friends, and for the song itself. ‘Ai no Supreme!’ (they translate it as The Supreme of Love!) will be released in Japan as a single on 14 July (which is the same month that Dragon Maid S will start). There will be two versions of the single, the ‘artist edition’ and the ‘anime edition.’ Here’s another recent short fhána video:

If that’s not enough for you, those aren’t the only short Dragon Maid videos available at the moment. I highly recommend watching the Mini-Dora episodes, which are at Crunchyroll. They’re only about a minute long, but you shouldn’t judge an anime by its size. They pack a lot of comedy, cuteness, and fun into each one, and the intros are CG animated.