As the Coronavirus rages on, more and more productions in anime, film, manga, and games have found themselves delayed for the sake of protecting their creators. We more than understand this and wish for the animators, programmers, and illustrators of the world to remain safe above all else. That said, this latest delay amidst the spring of COVID-19 based delays is a pretty huge blow. Yes, Evangelion 3.0 + 1.0 has been officially delayed from its late June release date with no new date given. Fans have been waiting 8 years for this final Evangelion Movie and while the safety of Anno and his staff is certainly more important than getting the film out, some disappointment is understandable. 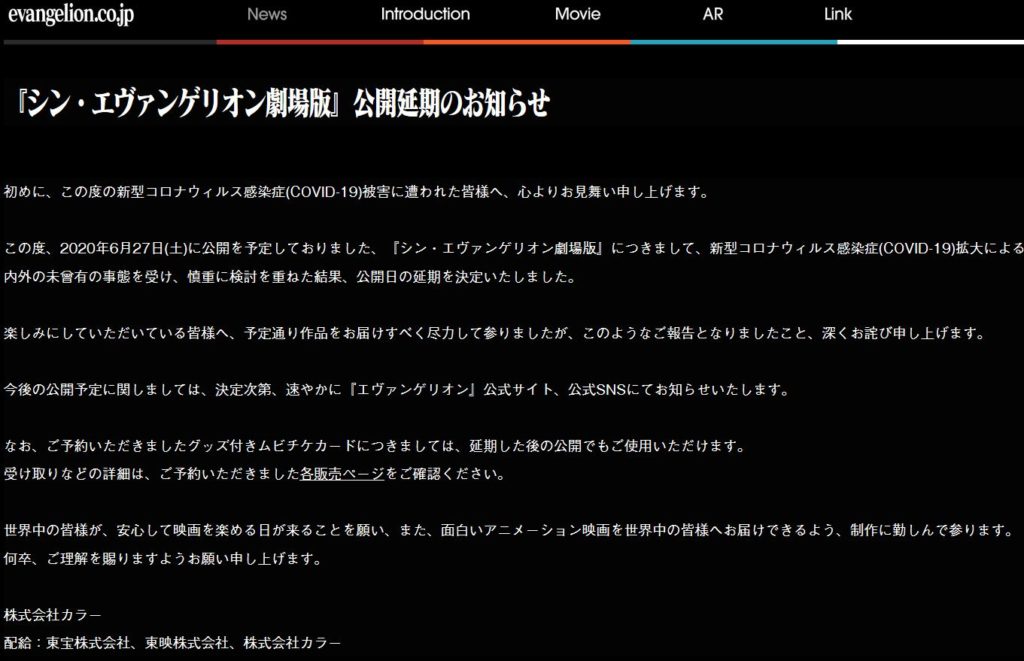 The above screenshot came from the official Japanese Evangelion website. Basically, the update says after carefully considering their options the studio and the film distributors have decided to push back on the release for this last Evangelion Movie.  They also apologize for letting down all the fans who were looking forward to the film. As soon as more information becomes available about when they can get back up to speed, audiences can expect updates to comes through Evangelion.co.jp and associated SNS services.

It’s been a long and winding road towards the final Evangelion Movie. For years after the 2012 Evangelion 3.33 there was radio silence and some fans assumed maybe the film would never come. After Hideaki Anno went and made the excellent Shin Godzilla, he found it in himself to start working on his most beloved creation once more. Once the new title ‘Evangelion 3.0 + 1.0′ was revealed to the public, news started to trickle out a little more regularly followed by a tangible release date and even the first 10 minutes of the film. Hopefully this delay will be relatively short compared to the 8 years previous, but again we hope everyone involved with the production stays safe during this troubled time.

Evangelion 3.0 + 1.0 will hit Japanese theaters at an unknown date after this Covid-19 based delay.