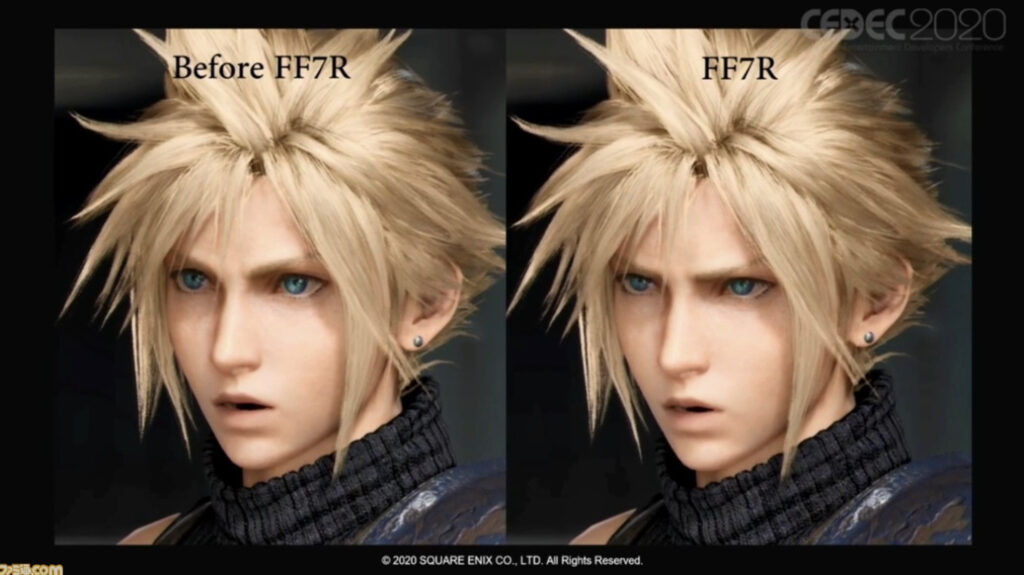 CEDEC is the largest developers conference in Japan, essentially acting as the Japanese equivalent to the American game developers conference GDC. Each year, Japanese developers present the technology behind their work at this developer-focused event. This year’s online CEDEC saw lead animation programmer Ryu Hara and facial director Akira Iwasawa from Square Enix give a detailed presentation on character animation in Final Fantasy VII Remake and the job of bringing iconic characters to life.

While this is a development presentation and therefore is rather heavy on technical jargon, its exploration of animation in Final Fantasy VII Remake is an interesting one regardless. 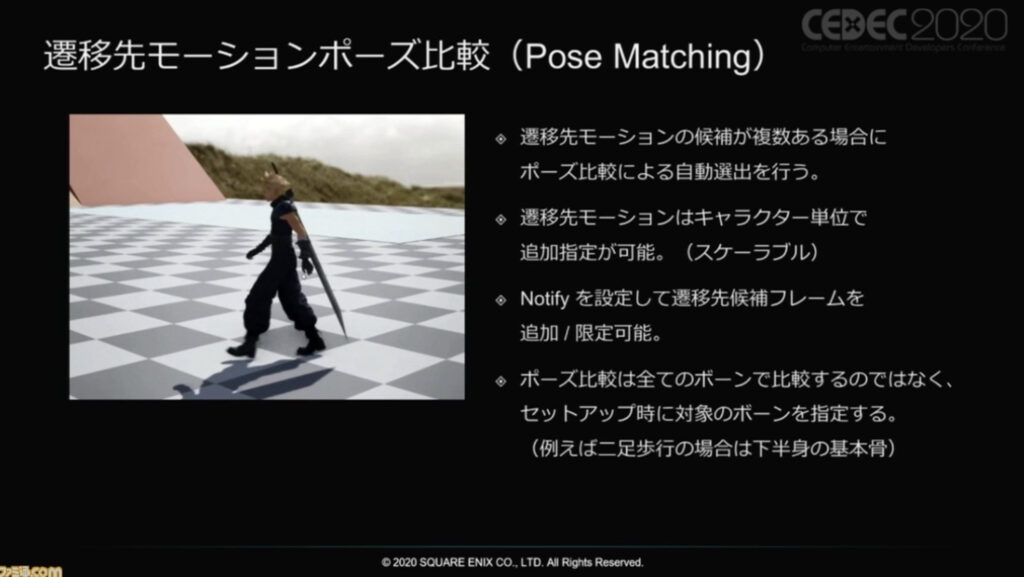 Due to the number of animations necessary to create realistic and expressive characters in AAA games today, some level of automation for in-between animations and transitions between various animations is necessary, a technique commonly known as procedural animation. With Final Fantasy VII Remake making a shift towards being more of an action RPG in this title compared to the real-time menu-based battles of the original game, a need to transition between various motions was necessary. Techniques such as Inertialization were utilized to essentially blend two different animations by automatically creating some sort of animation that would move the character from the end of one animation to the start of another.

Think of trying to pick up and open a book. The picking up of a book and the opening of the book may be created normally, but the movement that brings your hand to the cover of the book to open it would be procedurally generated. 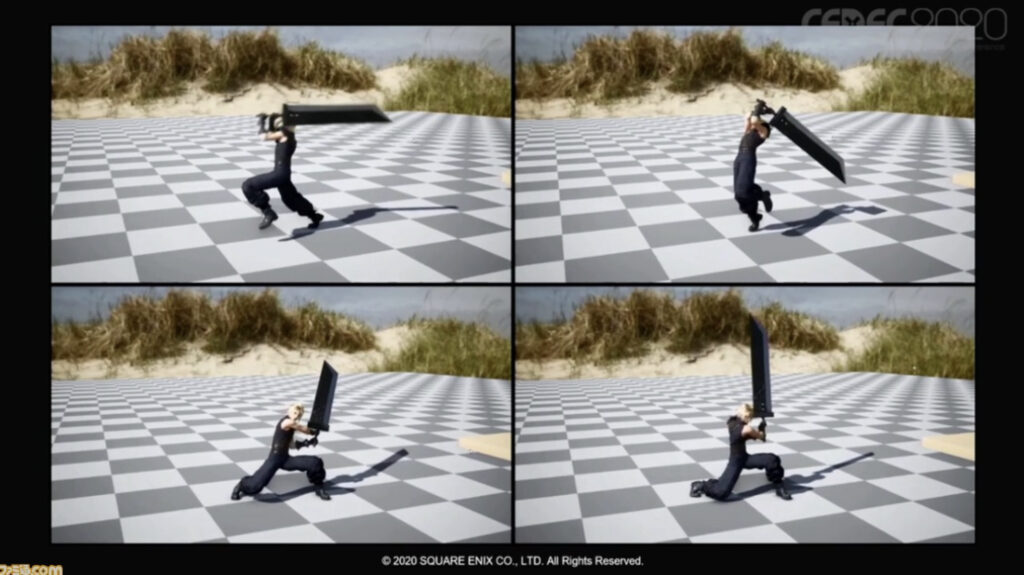 In the presentation, this was shown off on a test level with Cloud using his Buster Blader to track. Any in-between animation generated here looks natural since the swinging of the blade is similar every time, however when attempting to walk or run, an action much more influenced by human interaction with the control, possibilities increase as to what the person will do following an animation, making automation more difficult. In these circumstances, to avoid jerky movements when Cloud is walking around out of battle, for example, Pose Matching would be used, where several poses will be considered by the game and procedural generation will transition between these poses based on player movement.

To bring these characters to life, similar generation techniques can be seen across the character’s body for the hands and face, with some level of automation being used all across the game to assist in animation. Also, as seen with many games, automatic adjustments to the character model for standing on hills was implemented, however, Square Enix chose to implement further features that allowed for greater control of the hips, which was then later used to allow for a wider range of automated motion and body motion that allowed for more natural guarding posture. Another procedurally-generated in-between animations will be created to assist where an enemy may aim, and static objects may react naturally to external motion, like hanging handholds on trains.

Where automation is perhaps most effective, however, is for facial animations, where the automation of subtle, unconscious movements like glancing in a certain direction while talking, were automated to increase facial expressions while talking. Eyebrows may subtly adjust while talking depending on the lines being said and how the rest of the face moves, with factors such as body motion being considered as well when it comes to how automation may be used for facial motion. You also see a level of procedural generation being used for lip-syncing to dialogue, with a system given the incredible name of HappySadFace. 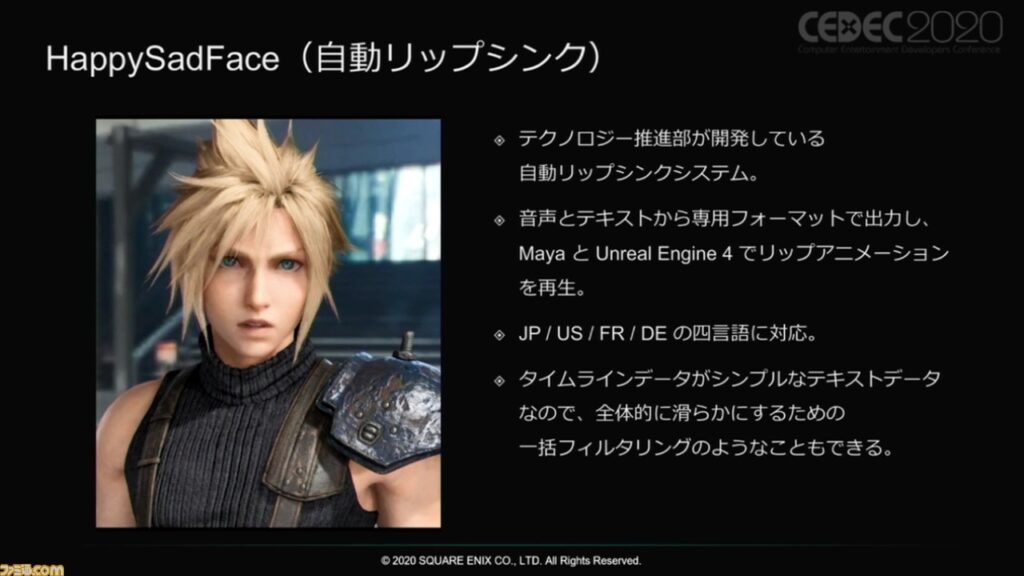 While it may be a subtle feature, it was explained here in this CEDEC talk that this animation feature is what is credited by the developers at not just bringing Cloud and the gang to life, but for allowing Final Fantasy VII Remake to be released in multiple languages such as Japanese, English, French and German with fully voiced dialogue that was both expressive and realistic in each language. Without automation, this likely wouldn’t have been possible.

Automation always comes with the input of non-automated work, but some level of automation is necessary to create games at the level and scope seen in many AAA games. While not the first time the team have dove into the development of this game, as explored in this CEDEC talk, Final Fantasy VII Remake uses automation in its animation to bring its characters and world of Midgar to life in more subtle ways that sell the whole experience. With a look behind the game development curtain, it’s interesting to learn all the various techniques that helped to bring