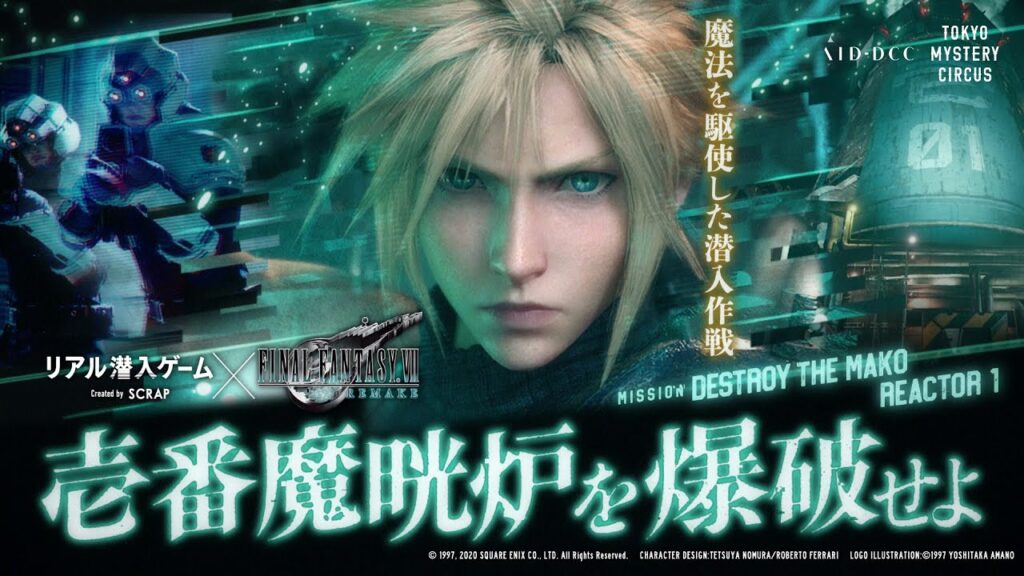 The iconic Mako Reactor bombing run was lovingly remade for Final Fantasy VII Remake, and now you can experience it for yourself with a special SCRAP escape room set to open next week in Tokyo.

Tokyo Mystery Circus opened in 2017 in Kabukicho in Shinjuku as a series of escape room games for solo or parties based on various themes, and often becomes home to the various collaborative escape rooms we’ve talked about more than once here, from Persona to Perfume. The latest collaboration sees the mission to destroy the Mako Reactor in Final Fantasy VII transformed into an escape room.

Working with Cloud and crew (via a screen that spits out messages throughout the mission), the aim of the game is to solve puzzles as you work through to the reactor, bypassing security and more, in order to destroy the Reactor and escape. Participants have 30 minutes to complete the mission. When people think of Final Fantasy VII, this opening sequence is one of the first things that comes to mind, and now people can take part in it themselves.

As with any collaborative escape room, there’s merchandise to go along with it. Most of this simply takes the special artwork created to promote the escape game and puts it onto clear files, posters, stickers, and the cover of a special pamphlet, alongside pin badges using art from the game itself. I rather like the contrast black-and-blue reactor artwork used for the muffler towel.

Tickets for the game cost 3000 yen per person, rising by 300 yen if it’s a holiday or weekend. However, and perhaps this is the coolest piece of tie-in merchandise for the event, a special edition of the ticket can be purchased in advance for 6000 yen that includes a Phoenix Dawn pen and a continue ticket, which can be used to keep working towards the end of the game if you make a mistake or time runs out. Continue tickets can alternatively be purchased for 800 yen.

The Final Fantasy VII escape room opens on 9 December, and you can find out more over on the official website.