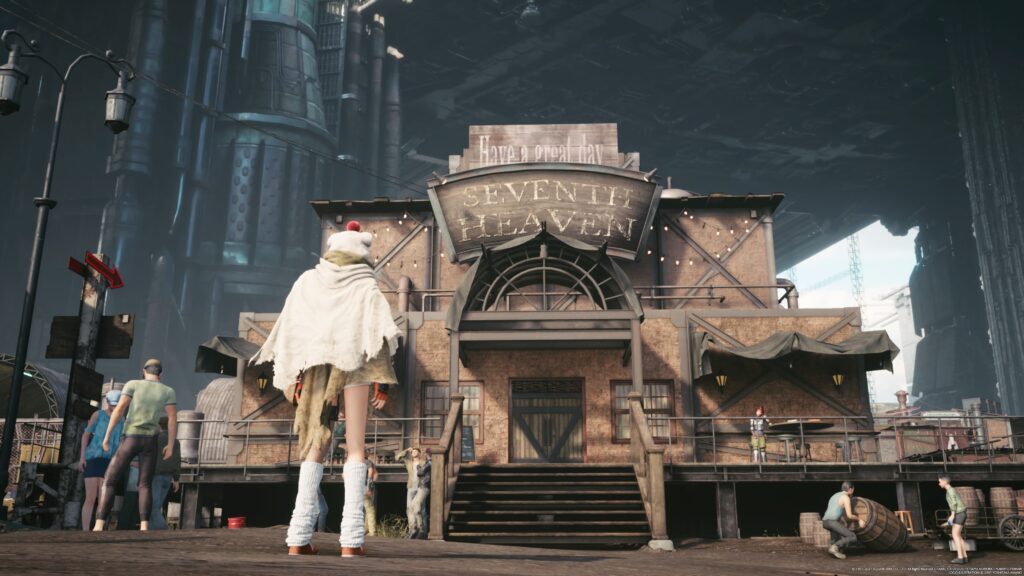 Imagination was the backbone of the original Final Fantasy VII when it was released in January 1997. The opening cutscene gave us an initial sweeping look at Midgar, but grasping the unbelievable magnitude of the city during gameplay wasn’t always easy in the PSX era. No camera movement and segmented areas kept us cloistered.

Returning to the game on a new generation of consoles is bittersweet… gone are the days of needing to piece together stories and places and people with our own personal brand of creativity. In Final Fantasy VII Remake there is simply no need, not when you can count each individual stitch in Yuffie’s Moogle hood, or pan the camera up to see the tremendous plate ominously sitting above the slums. (Or should I refer to that monstrosity as the ‘rotting pizza?’) 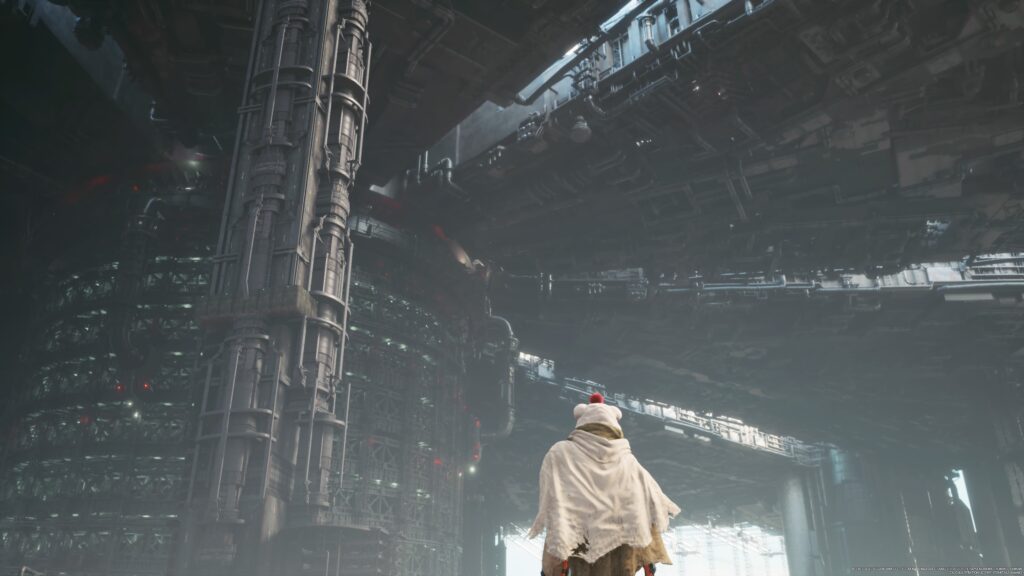 Does Final Fantasy VII Remake Intergrade look incredible? Without a doubt. Jumping back on the original PS4 release to jog my memory, the changes are actually quite noticeable, with the performance mode providing a zero-stutter smooth-as-butter gameplay experience. Certain lighting elements and textures have been improved, and players should note that pop-in has been greatly reduced, giving a much more stable experience.

Most importantly, load times have nearly been eradicated, down to around 2 seconds on the PS5, compared to 40 second wait times in the original title. No more putting down the controller to scroll Twitter until the area loads in! Hurrah!

Fans excited for the new photo mode will be pleased, even if the implementation is somewhat minimal. Forget fancy borders or stickers: you can pan and tilt the camera, add some fairly basic filters, get pesky characters out of the way for landscape shots, and… that’s about it. Will you need any more than that for capturing Tifa and her… assets in all of their glory? Probably not. The DualSense controllers also aren’t entirely utilized in this release (though the haptic feedback is quite nice.) Do be prepared for a very catchy turtle song to come out of it during the Yuffie DLC. I wasn’t, and the wine stains on my blanket are there to prove it.

Classic Mode in the game’s original release was regarded as being far too easy, but Intergrade is offering some increased difficulty for Classic mode. Players will have the ability to take over any action at any time, which could come in handy for those playing through Remake for a second time, letting the computer do the fighting during those pesky random battles.

Yes, yes, Intergrade looks magnificent on the PS5, water is wet, and the sky is blue. Beyond the joy of replaying Remake again, fan focus is on one thing: a new episode, featuring a certain Wutai-born ninja ready for a big materia heist. How is Episode INTERmission?

(Don’t worry, no spoilers here. If you don’t have a PS5 yet, I’m not here to ruin your experience. Only to rub salt in the wound just a tiny bit.)

I’ll admit something up front: Yuffie was my least favorite character in the original Final Fantasy VII. (I preferred a certain other optional character. You know, more angsty and brooding, less peppy and cheerful.) Despite that, I was just as excited as everyone else to get my hands on some new content, regardless of who was in the limelight: and within the first five minutes, I had already fallen in love with this iteration of Yuffie.

Was it the Moogle hood? The on-point voice acting of Suzie Yeung and Yumi Kakazu? The way her victory pose remained intact from the original title? She’ll make a worthy addition to the party in the future, because besides those merits, she’s also fun as hell to play. 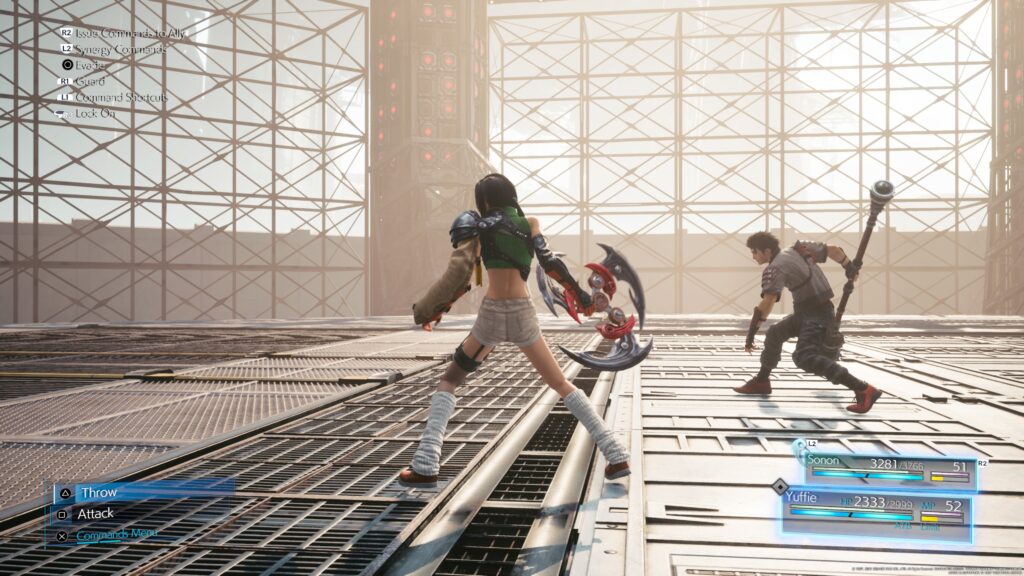 Beginning the episode at level 25, Yuffie comes ready to dive right into the action. If you’re playing the DLC, it’s implied that you’re already familiar with how Remake works… basically, that you’ve already played before. While the story itself is technically standalone, the mechanics are what matter here. If you need a refresher, all tutorials are still available in the menu, and a few quick and easy mechanics are explained at the very start to get you back up to speed.

Yuffie’s Shuriken can take you between close and ranged combat at the drop of a hat. If yeeting your weapon across the room at monsters isn’t pleasing enough, use ninjutsu magic, channeling any element you like to completely wreck enemies without getting blood on your cloak. Sonon, Yuffie’s companion and a new character seen only in INTERmission so far, isn’t able to be meticulously controlled by the player. Instead, he can be ‘synergized’ with Yuffie, allowing him to mimic her actions and cause massive damage while doing so. Synergizing, however, means that Sonon’s ATB gauge charges much slower, meaning the system can’t be abused TOO badly.

The design team clearly wanted to keep plenty of Yuffie’s personality intact, even during downtime. Leave her character alone for even a moment, and she’ll begin to balance on one leg, wobble, and fidget. When running across narrow gaps, she extends her arms exaggeratedly, like a child would balance on a curb. Final Fantasy VII is heavy (Yuffie’s backstory is no exception) but the more fun-loving, ever-optimistic attitude is more than welcome for a bit here. I’d love to see Vincent get the limelight in this same way, highlighting his personality. Almost like Dirge of Cerberus, but, you know, fluid and fun. 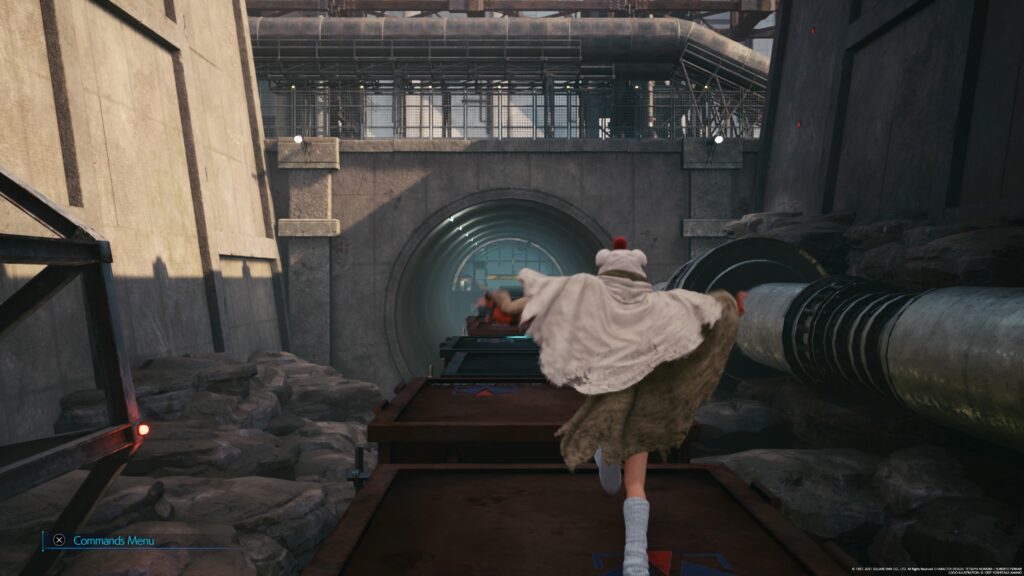 In the INTERmission trailer, a certain mini-game was previewed to mixed reactions. If you were one of the approximately six people who actually enjoyed Fort Condor in the original PlayStation release, more power to you. Everyone else was pleased to see something that looked like an improvement, but is it actually fun?

Just as Final Fantasy VIII is a card game with a few RPG elements thrown in, INTERmission could easily be called a board game with some ninja stuff on the side. Seriously, I wanted to throw down with everyone I saw, and it utterly distracted me from the main story for a few solid hours. The only downside is that there are only so many people to challenge, but it’s a highlight either way. It’s simple, it’s quick, it’s addicting. It’s VII’s new answer to Triple Triad, and I’m living for it.

Pick your pieces, defend your towers, knock down the opponent’s towers. Three minutes a round. Easy. Horribly and unexplainably addicting. 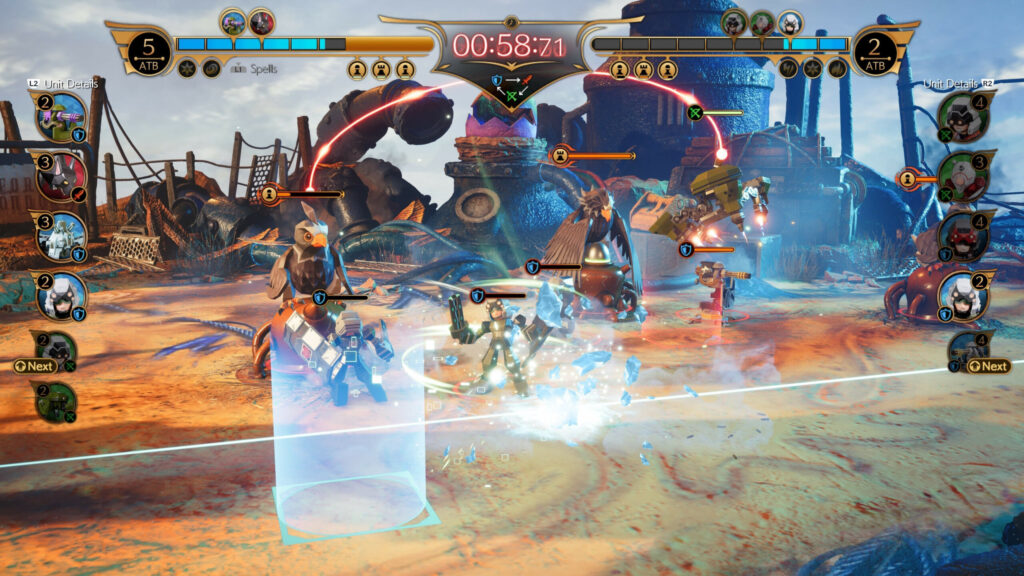 If you thought that the SQUARE ENIX‘s music division went hard for Remake, you won’t be prepared for the absolutely reckless bangers they dropped on us in INTERmission. Only this team could take a little bar jingle and remix it a dozen different ways. Heavy-metal song about a Happy Turtle? Can’t wait to explain that when someone passes the aux cable.

A highlight of the music is the surprising jazz element, playing through much of Yuffie’s exploration of Sector 7. And why not jazz? It’s as unpredictable as our Moogle-headed protagonist, freeform and flowy. It’s impossible to pin down, and even the occasional battle doesn’t halt it, as the riffs transform seamlessly into something more hectic and wild. It’s no surprise that the music is solid. What is surprising is how the composers still find ways to supersede our expectations. Thankfully, the full Intergrade soundtrack is coming 23 June.

An opinion I’ve seen popping up across social media is that INTERmission isn’t a necessary piece of the Final Fantasy VII Remake puzzle. Technically, no, you don’t need to play it for the overarching story to make sense, but why wouldn’t you want to spend some more time in Midgar? If you’re new to the world of Final Fantasy VII, why wouldn’t you want to get to know these characters a little bit better?

Since Remake released last year, I’ve seen people complaining about perceived ‘filler’ content in the game as compared to the original. My rebuttal is: is that such a bad thing?

Think back to when you hit 100 percent completion of Final Fantasy VII in 1997, and that feeling of accomplishment, followed by emptiness. The adventure was over, and those characters we had grown to love had nothing more to say. The story had been told, and as you triple-checked that save file and powered the console off, didn’t you wish they had just one more story to tell?

It doesn’t matter if this is just a ‘side story.’ It’s time well spent with an old friend. Does it need to be anything more?

For those who previously purchased a copy of Final Fantasy VII Remake for the PS4, the free upgrade to Intergrade is now available to download on your PS5. If your copy of the game came as a free download from PS Plus, however, you won’t be eligible, and will need to pay for the PS5 version of the game.

The Yuffie DLC, INTERmission, will need to be purchased separately, and is $19.99 on the PlayStation store. However, if you are buying Intergrade from scratch, the DLC will be bundled with it, whether you buy the normal or digital deluxe edition.