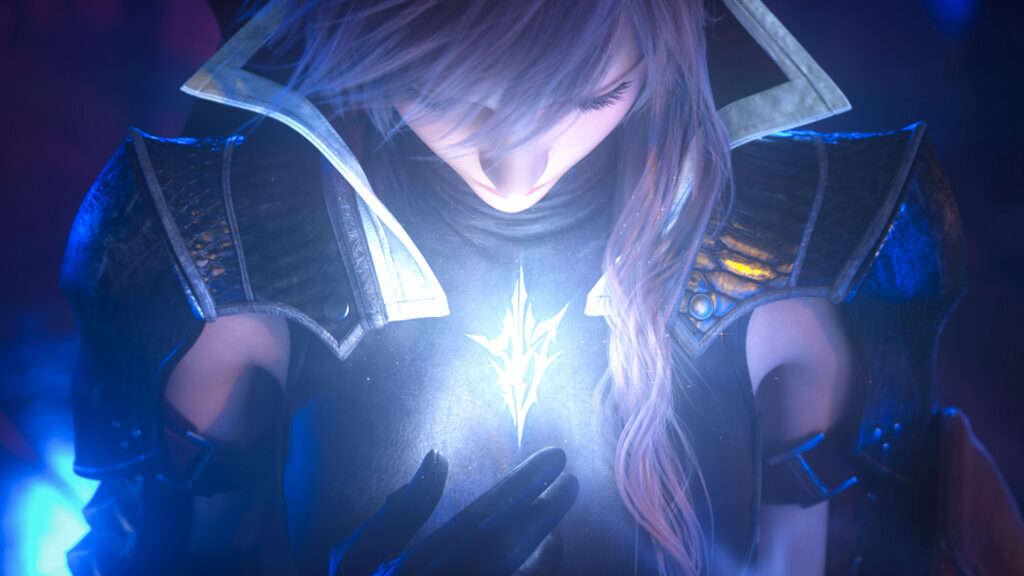 Final Fantasy XIII sits on its cold thrown as the most widely disliked entry in the most widely liked JRPG series on the planet. Though recent years have seen any number of ‘Actually, FFXIII was pretty good because’ think-pieces, and while we’re definitely adding to that pile, we wouldn’t say specifically XIII isn’t the worst mainline game in the series.

Besides its myriad flaws and shortcomings, which we will not deny hang in plain-sight, all sorts of games-potential, thoughtful artistries, and emotional resonation lies within the overarching Eff-Eff-Thirteen.

Before the original Final Fantasy XIII launched you down its endless metallic corridors that succeeded in pissing just about everyone off, it front-ends you with a bunch of lingo and backstory impossible to remember, even after reading a Wikipedia article.

The intricacies of the capital P Plot aren’t what’s important here. Just remember the series gives you a girl with a Gunblade (HELL yeah) who’s looking for her sister, who then starts looking for her, and finally she Lighting Returns just in time to greet the apocalypse.

Her companions, perhaps the most unique party in all of Final Fantasy historically, don’t get enough credit either. Square Enix made history in FFXIII by creating the world’s first JRPG-stoner dude, and gave you not one but two Australians on top of that. Groundbreaking! The cast journeys together and individual emotional arcs serve as the foundation of why you should revisit the trilogy, though those ‘linear’ corridors lead to much more down the 13 path.

We laugh at the long hallways, the nonsensical story, the lack of much JRPG staplery in when naval-gazing… but don’t forget… You wanted this!

Call it growing pains, but arguably much of Final Fantasy XIII’s notorious Final Fantasy XIIIness resulted from years of Gamer Criticism™ taken to heart. Fans long grew tired of random battles and seemingly endless dungeons so easily you could find yourselves lost in them for hours. Western games had become more dominant in the mid-PS3/XBOX 360 era too, which brought players to the action much more quickly than their Japanese counterparts.

In retrospect, making the levels completely hotdog-shaped and removing towns hurt XIII’s immersion too severely, but the game was made in response to what fans thought they wanted. Historically, that alone earns FFXIII the individual game a revisit, if only to better appreciate the rest of the franchise. Though if you do, and you stick to it with the end, we promise it’ll provide you with the type of tears only Final Fantasy can successfully draw out of somebody’s eyes with some still-stunning imagery along the way.

Beyond being the second numbered Final Fantasy sequel ever, Final Fantasy XIII-2 takes a few hints from The First Sequel to inject the FFXIIIverse with some Playstation 2 FF flare. While retaining Vanilla 13’s battle system with some tweaks, it brought towns, talking to people, and PS2 Final Fantasy fashion back into the mix.

Those long industrial pipe shaped hallways are gone too. The story centered around a character who was mostly just a Crystal in the first game, and a brand new guy who could’ve been one of the Besaid Aurochs in a previous life. They also introduced Caius: a more true-to-form FF villain in the vein of Sephiroth or Jecht, with a big old sword and feathers in his hair for some striking JRPG visual flare.

Being a patchwork romp with some of 13’s skeleton and new additions, it doesn’t quite feel like the ‘what if Final Fantasy XIII was truly realized’ that some fans hoped it would be. However, the developers went back and salvaged some of the better aspects of the original game to tell a new story, in an attempt to curtail to fan, and that at the very least makes for an interesting experiment worth a one-off.

The Final Fantasy XIII team reached the promised land with Lightning Returns, granted through some dubious means. We can say definitely that the unofficially-referred-to-as XIII-3 is the best Final Fantasy XIII game and the best (and only) FF threequel. We can also possibly claim that the game could’ve been influenced by fellow PS3 Square Enix title Nier.

The not-actually-calling-it Final Fantasy XIII-3 makes sense for a few reasons: the previous MMOIsh gameplay got scrapped for mechanics resembling action, the structure of this one’s entirely different, and the game’s dripping with pathos and realized intent not found in the first two.

Paradigm shifting into entirely new atmospheres, Lightning Return takes place just before The End Of The World; Humanity’s simultaneously dying out despite no longer being able to die (or even AGE) through natural means, and the world’s remained stagnant for 500 or so years. Lighting, after returning, runs around visiting old friends, some of which have dealt with the stress of 500 unchanging years better than others.

Like the original Nier, as you’ll soon discover in its remastered form, Lightning Returns: Final Fantasy XIII succeeds in giving players a palpably forlorn world with humanity in its twilight years. It feels alive as it feels dying, and while not a perfect game for x, y, and z reasons, it delivers some real psychic impact.

The Totality of the XIII Experience Deserves Your Time…

…though, ironically, only XBOX and PC users have access to it.

Instead of thinking of the Final Fantasy XIII games as three individual video games, or even a ‘trilogy’ in the Lord Of The Ringsian tradition, take it in as one symphonic experience. Much like Final Fantasy XV would mirror years later, FFXIII’s crescendos and climaxes at the end of its winding tubes dressed up in State-of-The-Art Playstation 3 aesthetics hit hard… if you’re willing to trust it with your time in hopes for a pay-off. With a whole Nier-esque experience waiting for you as a consolation for Well-Intentions-Not-Fully-Realized, that does pull it off despite all evidence to the contrary.

Would I go back in time and change Final Fantasy XIII if I could? Yeah, probably. But, considering at least 10 great other Final Fantasy games out there already exist, I find it more interesting that the XIII development time over three concerted and evolving efforts begrudgingly stumbled into pockets of art and magic none of the 2010 ‘Games Critics’ wanted to pick up on. Don’t believe us? Check out all the ‘actually, FFXIII was beautiful guys’ you can find ad nauseam on The Bird Website.

A shame you can only play the Final Fantasy XIII trilogy on modern Xboxes and PC, with no PS4 or PS5 re-release yet.