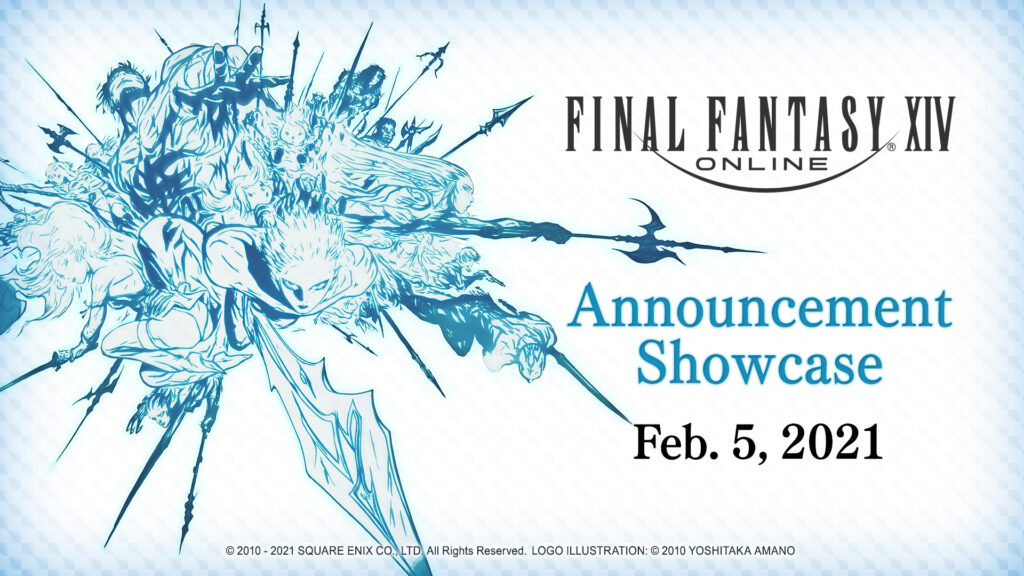 Now that the live stream is over, let’s take a look at what Square Enix, Naoki Yoshida, and his team have announced.

The live stream opened with a trailer of our protagonist walking on the moon and the narrator saying that the end of days has come, showing off what seems to be one of the new jobs and some very nice looking CG graphics. At the end of the trailer, we see the name of the 6.0 expansion: Final Fantasy XIV ENDWALKER. After the trailer, director Naoki Yoshida took the stage and greeted everyone. He stated that he will be spending the next bit of time going over the new announcements. 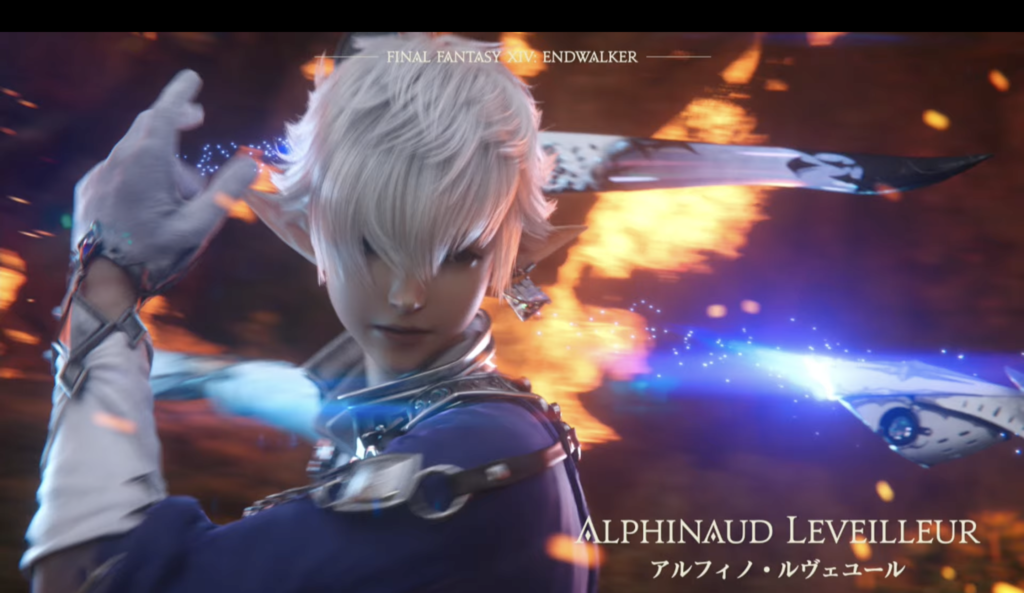 Naoki Yoshida said that the Final Fantasy XIV Live Stream is the first event of what would be the Fan Fest events, and that there will be many updates going forward. He stated that because of the pandemic the production of the title has been delayed and is now slated to be released in the fall of 2021; most Final Fantasy XIV expansions were released around summer. 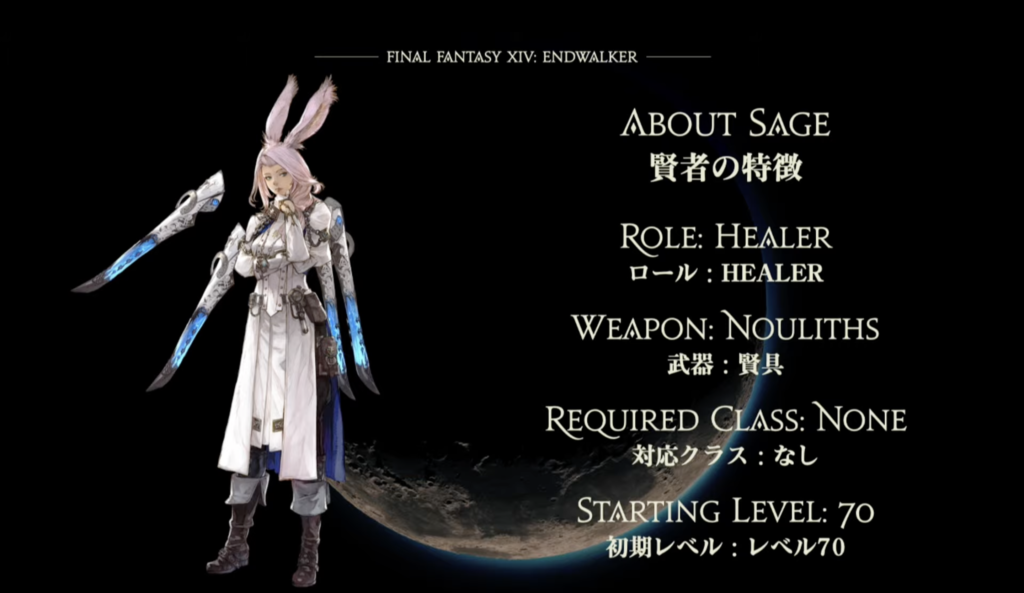 Following this, Naoki Yoshida announced that Endwalker would be having two new jobs. For the last few expansions, people have been complaining that there are not enough healer jobs, so Final Fantasy XIV Endwalker will have a new healer job and a new melee DPS job. The alsoy showed a short in-game video about the new healer class, ‘Sage’. The class looks extremely flashy and uses a new type of weapon unique to this role. Yoshida stated that they plan to announce the new DPS job in May at the digital Fan Fest. 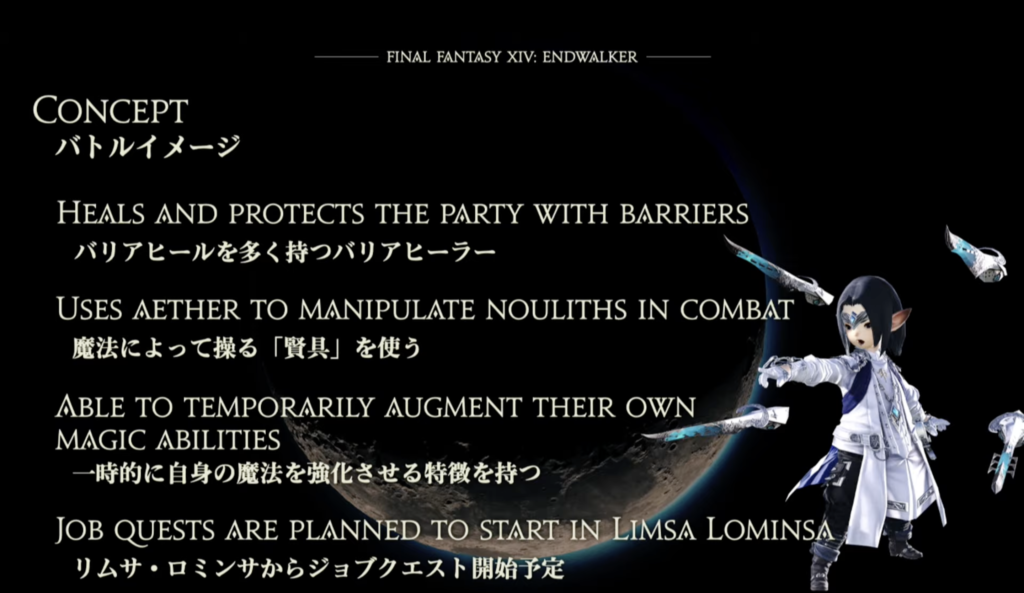 They then talked about the story and showed the words ‘Final’ ‘End’ ‘Finale’ and how they play a major role in the story of Endwalker. Naoki Yoshida stated that the expansion will bring us to the end of the story with Hydaelyn and the current heroes that we have come to love. Up until now, all expansion stories were not finished until further later in their patch, but in 6.0 the story will complete before patch 6.1, which will start a brand new adventure that is not part of the Hydaelyn and Zodiark adventure. 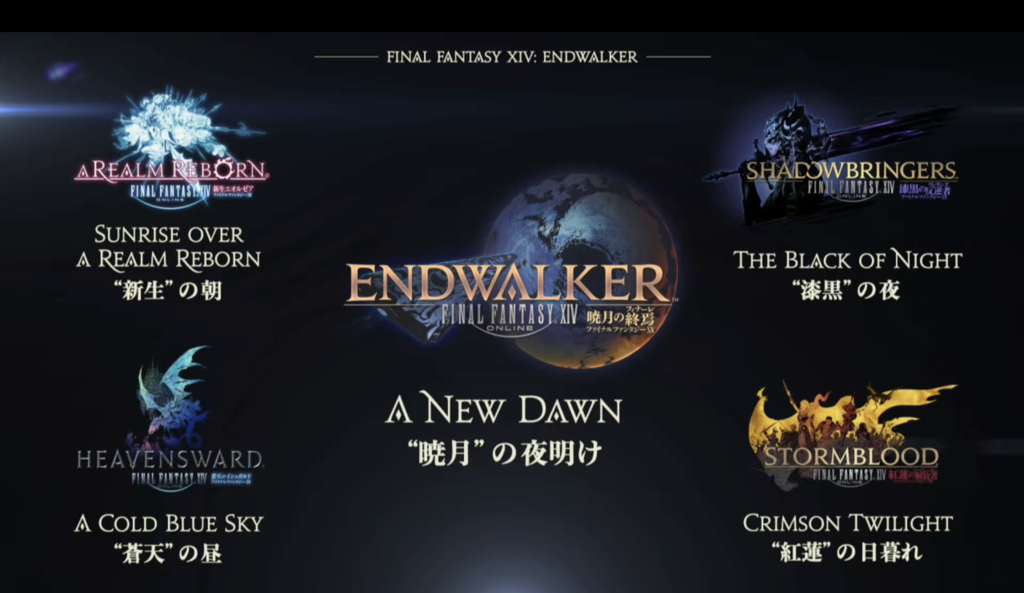 They then took the time to talk a bit about the story and what we can expect going into Endwalker. He talked about how a lot of the loose ends that are currently in the story and plot will be completely tied up as well as what we will possibly be experiencing when we go to the moon. Yes, the moon. He stated that the story will be similar to Shadowbringers in the fact that it is very complex and will have a bunch of surprises.

There are also new locations to visit in the Endwalker expansion. The first place they shared was ‘Radz-at-Han’, a tropical town on the island of ‘Thavnair’. The name ‘Thavnair’ might sound familiar, as it has been mentioned many times since the beginning of the 10-year story that we have been on. We will also be meeting some new tribes within the game as well. If you’re familiar with ‘The Hunt’, there are some elephant-looking characters who go by the name of ‘Matanga’ and who are quite violent. They will be the new tribe that we will be visiting on Thavnair. Yoshi-P also announced that there will be new dungeons, raids (they showed some art from the new raid ‘Anima’ from Final Fantasy X), alliance raids which are brand new unique to FFXIV stories that are not part of any collaboration event, and a new casual PVP mode. 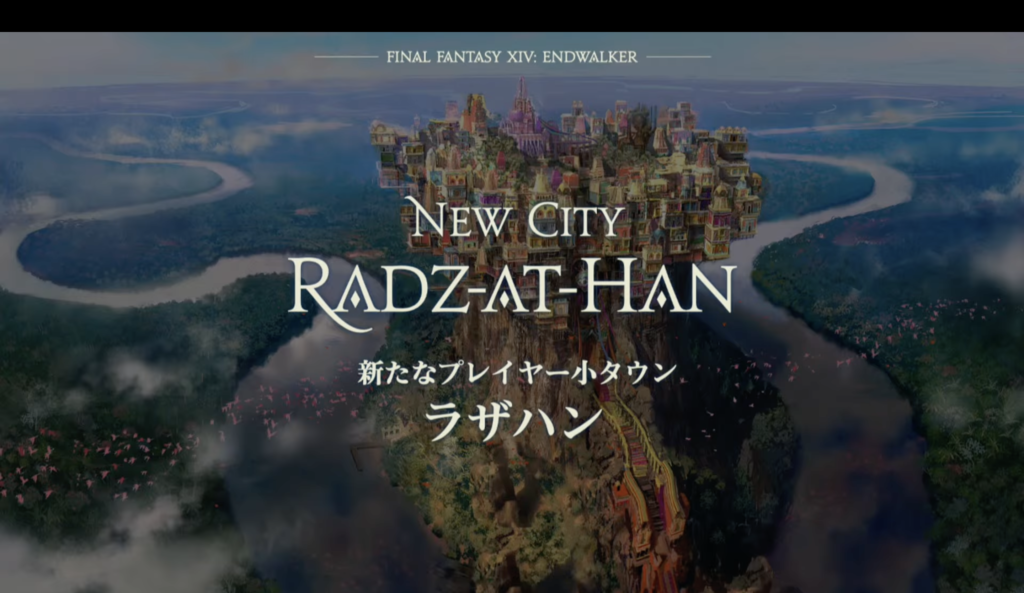 Yoshi-P talked about some pretty deep overhauls of the Trust system and adding Estinien as a trust member. Gold Saucer will also get a major update and asked what people would want to be in the Gold Saucer, kinda teasing at ‘Blitzball’ from Final Fantasy X.

They introduced new content for the game that is geared towards people who want to just relax: players will be able to raise animals, take care of their island, and sell the contents that come from their labor. Sounds a lot like Animal Crossing but this is going to be called Island Sanctuary. 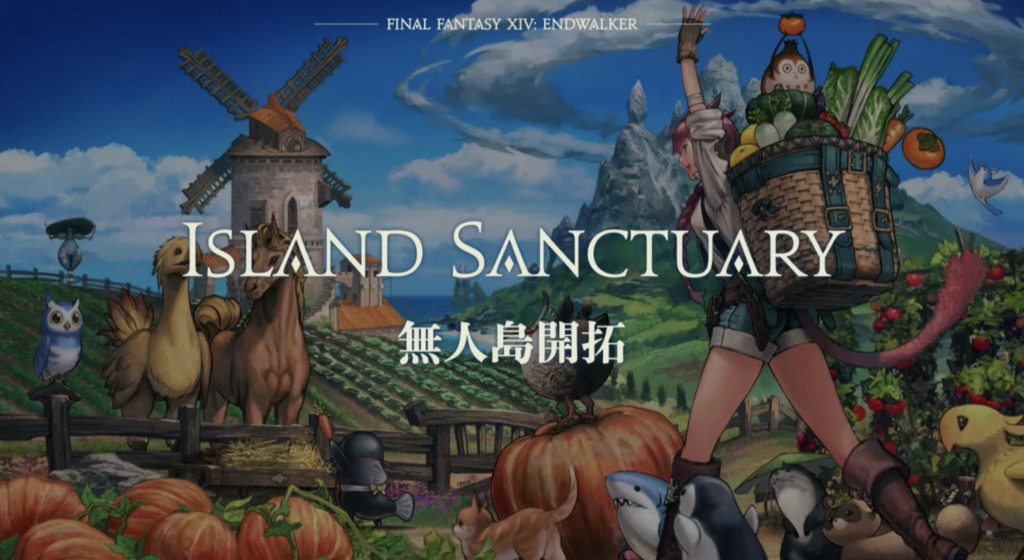 Yoshi-P also announced that those who have completed Restoration of Ishgard,will be able to access the new residential area within Ishgard, something that players have been requesting for quite some time. At the start of 6.0, players can check out the area but will be unable to purchase any land plots until 6.1. 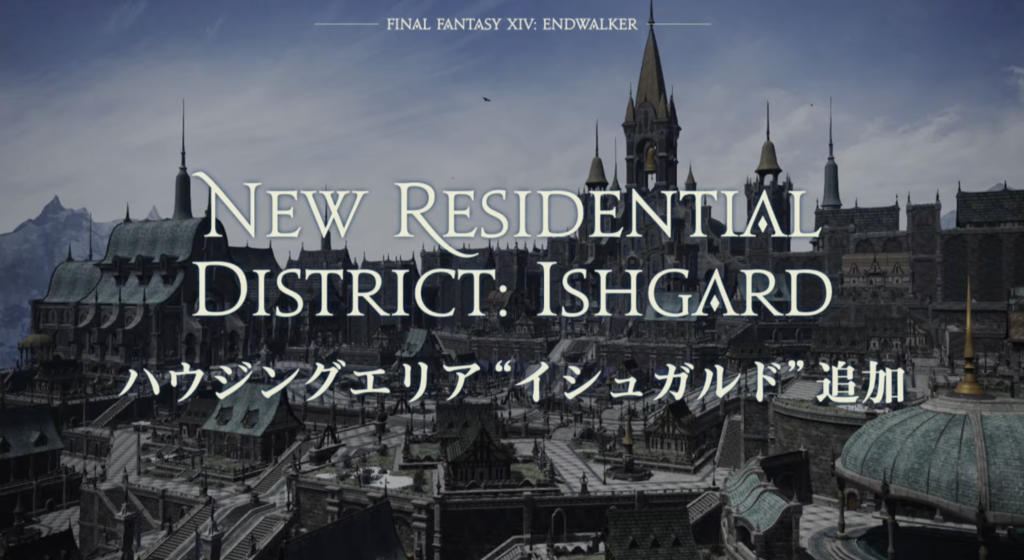 They also mentioned some changes to the battle system being a downscale of value used to calculate damage in battles. Yoshi-P outlined several reasons for this: mainly server backend stuff and the fact that the HP limit for bosses were getting staggeringly high with one boss in patch 5.5 having a whopping 440,000,000 HP. 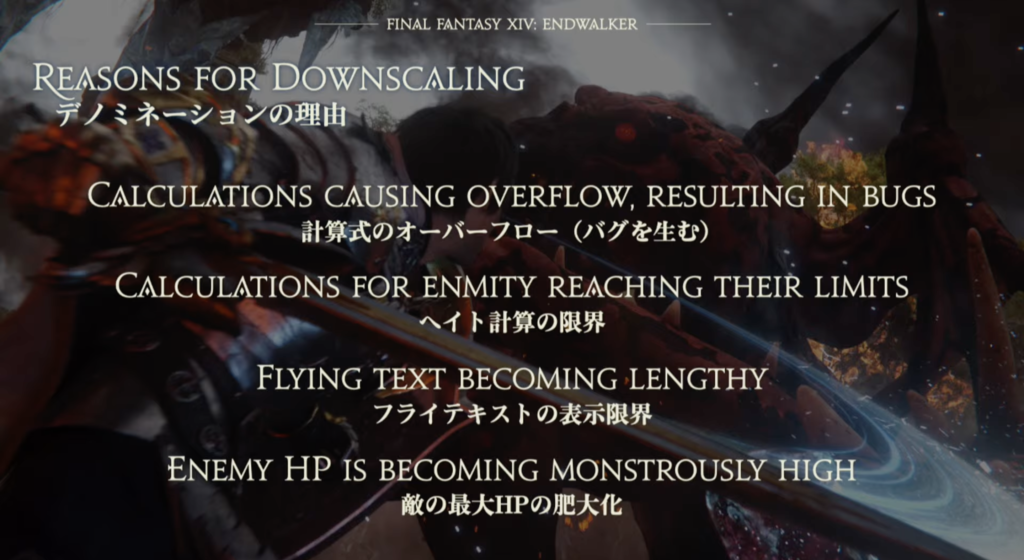 In order to fix this, they will change growth percentages between levels 51-80, how enmity is calculated, and an overall downscaling of damage dealt, exp earned, and how much damage enemies do. Your character will not be getting weaker, only the numbers displayed will be smaller. Yoshi-P stated that his Black Mage character which is level 80 with an item level of 530 does about 50,000 HP worth of damage without a direct critical hit, but with the new changes it will be about 10,000 HP, but growth will still be there as you level up. 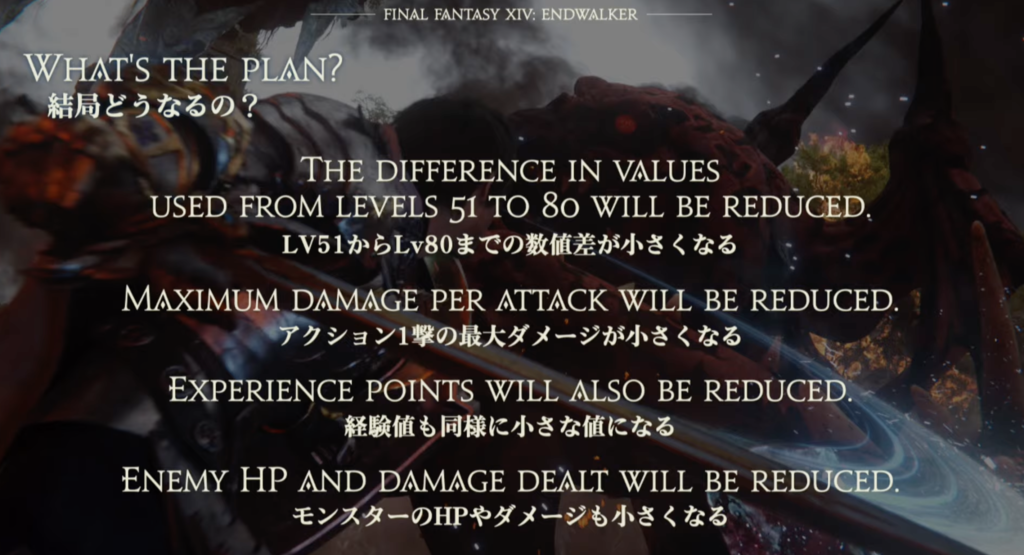 They will also be removing belts, a part of gear that has been around the game since the initial 1.0 version of the game. Many people have just asked them to remove belts from the game, as their benefit to the character is fairly negligible. 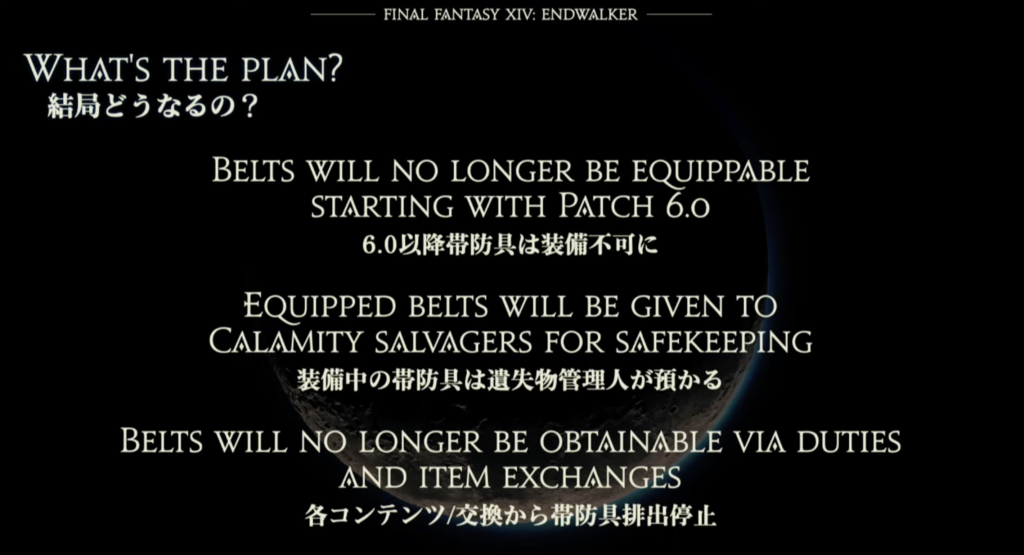 35 slots of inventory are now freed up, and they mentioned what they will be doing with those slots: 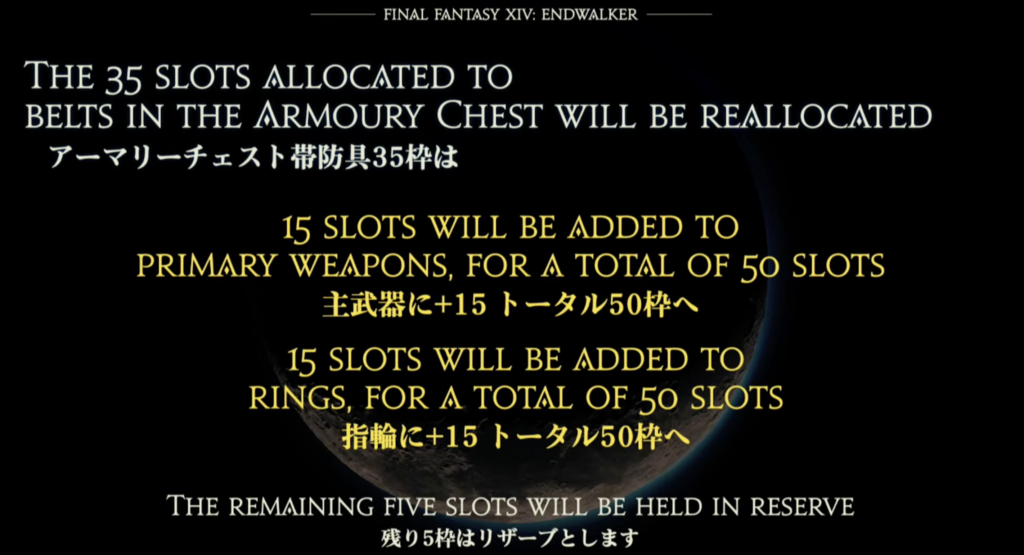 Yoshi-P also announced the ability to travel to different data centers. The way that it works is different than it would work with standard world travel but they are working on the ability to be able to visit your friends at various data centers. There will be a decent amount of restrictions such as not being able to use your linkshells or interact with your free company. 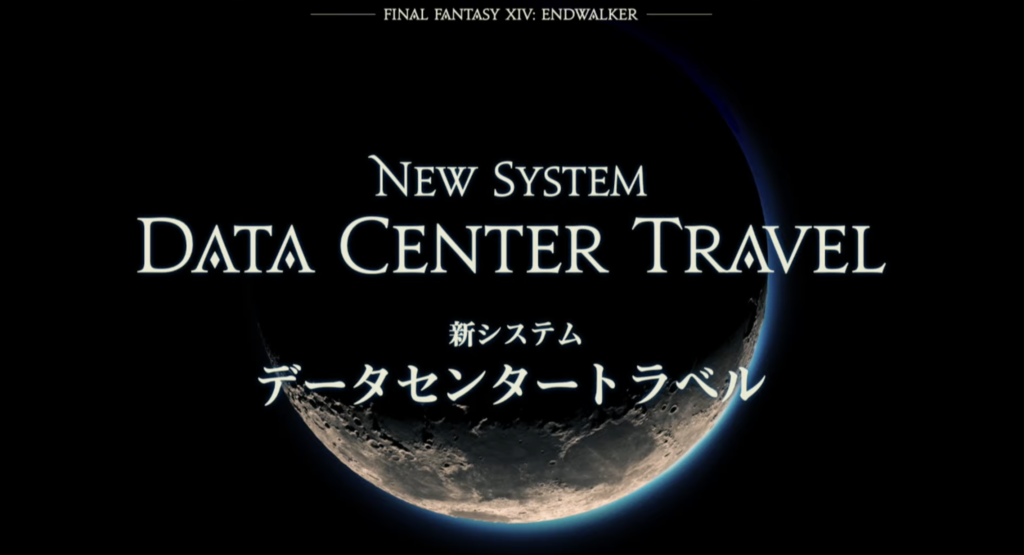 At this point, the CEO of Square Enix Yosuke Matsuda takes to the stage and says that Yoshi-P is forgetting something major. He announced that the team has been hard at work on a PlayStation 5 version of the game and that it will be starting open beta on 13 April 2021.

He then goes on to ‘spoil’ that it just happens to be launching on the same day as patch 5.5, a date which has not been announced as of yet. The PlayStation 5 version of the game will support full 4K, insanely fast loading times, and much higher frame rates. It will be available for free to anyone that owns the PlayStation 4 version. 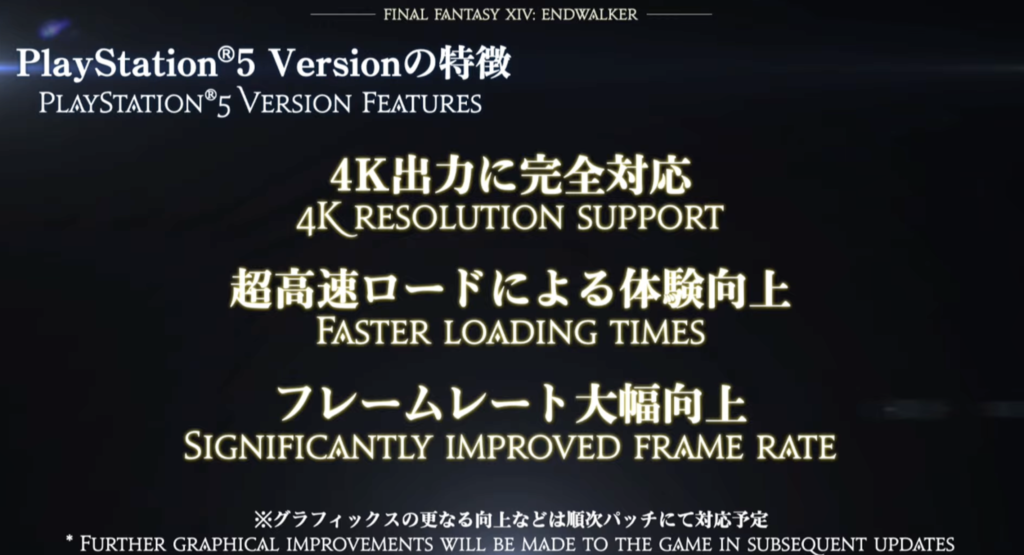 The Final Fantasy XIV live stream wrapped up with the CEO Yosuke Matsuda sharing a few comments and thanking the viewers for taking the time out of their weekend to watch the live stream. They have a bunch of other stuff to announce down the road and thanked the players for helping Final Fantasy XIV continue for the last ten years. Yoshi-P stated that there is still a bunch of information to share about Endwalker and that they will be doing so on 15-16 May 2021 as part of the Digital Fan Festival ‘Around The World’, which will be two days full of content, including live concerts. 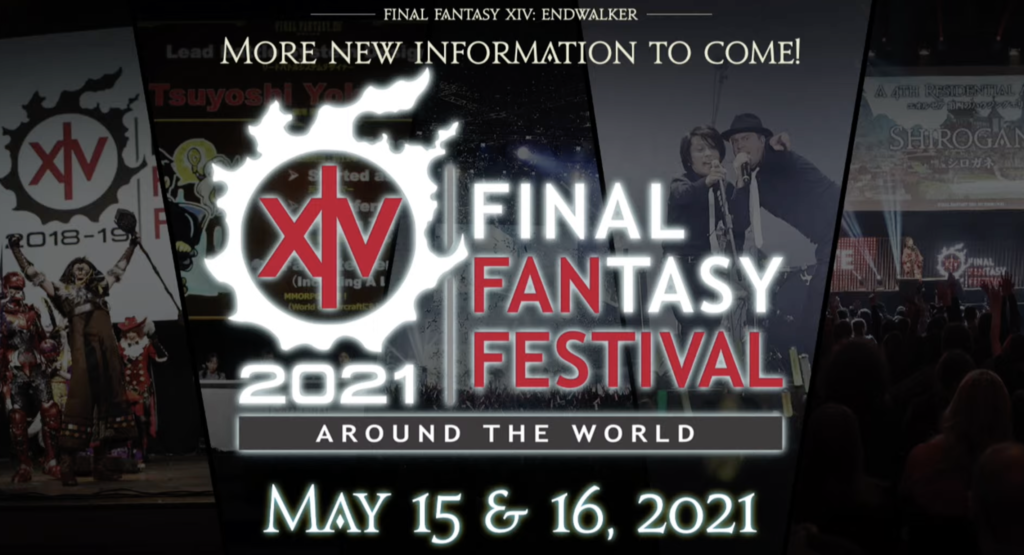 If you are interested in watching the full reveal for yourself, you can do so at the following YouTube video: