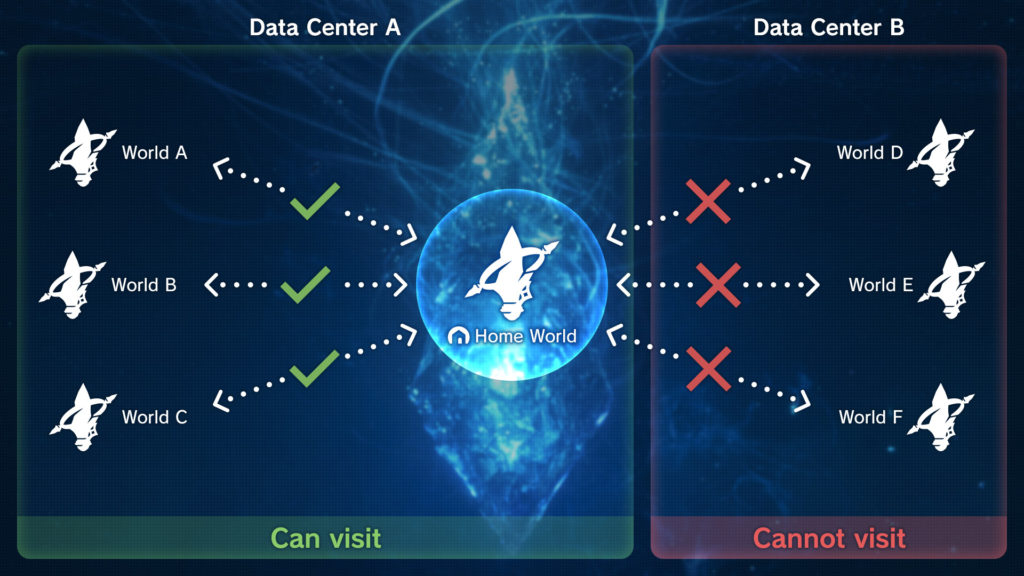 Final Fantasy XIV Online: A Realm Reborn is now one of the biggest MMORPGs currently running, with countless new users and faithful fans alike adventuring together in the world of Hydaelyn. But keeping such a massive world online for thousands of players has always meant separating the player base into smaller chunks – in FFXIV’s case, into different regional “Data Centers” and “Worlds.” This can sometimes lead to players being isolated from their friends if they’re not careful with their choices at the beginning of the game. That is, until now.

Ahead of the upcoming new expansion Shadowbringers, Square Enix has rolled out Patch 4.57, which includes the revolutionary new “World Visit System.” This new system is set to allow players to visit other Worlds in their Data Center – meaning that, as long as you’re in the same Data Center as your friends, what world you choose when making your initial character shouldn’t be that big of a deal anymore.

You might quite rightfully think that this system would come with a boatload of restrictions, given that separating players into different Worlds and Data Centers is done for a pretty good reason. But looking closely at the updated Play Guide section on the system reveals precisely the opposite – that players will be able to do most of what they can do in their normal World on the World that they choose to visit.

There are some restrictions, such as not being able to summon retainers, participate in the market, buy property, join or form Free Companies, but these are all mostly necessary for combating spam and bot accounts. Real estate is also rightfully placed behind a barrier to visiting players, as it already comes at a premium for many players.

The World that players currently inhabit will be referred to and marked as their “Home World.” However, there isn’t much dissuading players from relocating to or at least spending a long while in another world. Players won’t be kicked out of the world they visit when they log out, and quest progress is also synced with the Home World. Of course, Free Companies and the like are an important part of the MMO’s landscape so perhaps permanent relocation isn’t ideal, but accompanying a friend for a couple of weeks on a class or job grind definitely isn’t discouraged.

Removing the barriers between Worlds on the same Data Centers should only be a good thing. As I stated, it can often be annoying for new players when they end up isolating themselves from their friends because of their World choice at the beginning. The previously released Cross-World Party Finder has helped elevate this annoyance by allowing players to enter instances and dungeons together regardless of their World, but nothing quite beats adventuring side by side with friends in the same World outside of dungeons and duties.

That being said, the barriers between Worlds were erected for a good reason. It is unknown the effect of removing such barriers will have on the servers and infrastructure of the already massive MMO. Even before this patch, I often had to wait in a queue before being allowed to log into my world because of congestion anyway. I’m sure that Square Enix has a contingency plan regarding this, but things remain to be seen.

Patch 4.57 debuts on April 24. You can read more about the patch via the official FFXIV blog and see more details via the Play Guide.