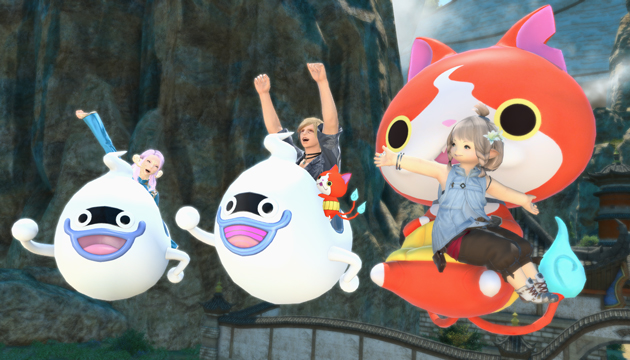 If you ever wanted to ride a giant Whisper in a Final Fantasy game, here’s your chance.

Gather One, Gather All

Take two franchises which don’t necessarily seem to fit together — My Little Pony and Transformers, Usagi Yojimbo and Teenage Mutant Ninja Turtles, or Detective Conan and Lupin III  — and have their worlds collide like peanut butter and chocolate.

Now they have another one with Yo-Kai Watch: Gather One, Gather All.   This special Final Fantasy XIV Online event started at 1 a.m. on Wednesday, Aug. 19, Pacific Time; or at 5 p.m. Wednesday Japan Time.  According to the website, the event will continue until Patch 5.4 is released.

Read all the gamer details below:

The event begins with quest from the Poor-healed Youth in Ul’dah – Steps of Nald.

To take part in the quest, your character has to be level 15 or above. You also need to have done either the Gridanian Envoy, the Lominsan Envoy, or the Ul’dahn Envoy.

After you complete the quest, you will get a Yo-Kai Watch and a Yo-Kai Medallium.  You need the watch so you can gather Yo-Kai Medals, which are sort of like the Friendship Medals from Yo-Kai Watch.

Collecting medals will let you get various Yo-kai.

Once you have found enough Yo-kai, the Yo-kai will serve as Final Fantasy minions. They’ll follow you around on your journeys.

You will also get Whisper-go, a Yo-kai Watch mount.  The mount looks like a big Whisper you can ride around in.

Apparently, there is also a Jibanyan Couch mount, which lets you sit on Jibanyan like he was a big flying couch.

Take part in a Full Active Time Event (FATE) with a Yo-kai Minion, and you can get Legendary Yo-kai Medals.

All of this questing and collecting will eventually lead to the event’s ultimate award, Yo-kai Watch weapons. Although personally, the weapons don’t sound as cool as flying around on a Yo-kai mount.

Incidentally, if you were playing Final Fantasy XIV in 2016 or 2017, you may remember that they had similar Yo-Kai Watch events then as well. According to reports, you should be able to skip some of the questing if you took part in the previous missions.

Good luck finding all of those Yo-kai!