Final Fantasy XV Takes the Franchise on the Open Road 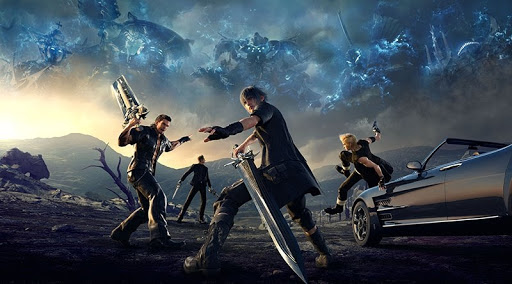 In 2016, I attended the PAX West, one of my favorite video game conventions. This was a few months from the much-anticipated release of Final Fantasy XV, and emotions were running high. There was a Mini-Cooper Uber all done up like a Chocobo, and a gaggle of girls wandered the halls asking which of the new characters was the most attractive, keeping track on a chalkboard.

The last major release in the series (that wasn’t an MMO) had released in 2013, and even that was a sequel to the often disliked Final Fantasy XIII.

Final Fantasy XV was different. This was a new Final Fantasy world, new characters, a new story, new locations, and revved up graphics. A demo released a few months prior had us all starstruck, as the little gameplay we were exposed to left us with more questions than answers. It both felt like a Final Fantasy game… and didn’t.

The real time combat system was completely different. The world was more open than we were used to and we had access to a car. A car which, by the way, could be programmed to play all the music from past Final Fantasy games. Even if fans complained about the overall strangeness of XV, they couldn’t complain about that.

So, what’s the deal with Final Fantasy XV? You’ve either heard wonderful things, or you’ve heard it’s a blight on the Final Fantasy series as a whole. Over the past few years, XV has become a universe all its own, so let’s take a look at where you should start. Don’t write this one off just yet.

A Tale of Royalty, Sacrifice, and Road Tripping with the Guys

Running around an open-world map is so old school. This time, get ready to have a sweet car and some serious tunes to drive you and your buddies around in style. Say goodbye to random enemies too, because you can always swerve around them if you like.

In the world of Eos, the Caelum dynasty of Lucis holds a powerful Crystal, granted to them by the Gods themselves. Niflheim, the powerful empire to the west, wishes to capture this Crystal for their own means, destroying anyone who stands in their way. 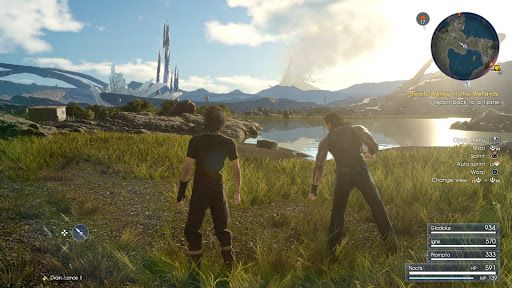 Lucis and Niflheim have been at war for hundreds and hundreds of years, but the Lucian capital of Insomnia remains safe from their threat due to the wall of magic surrounding it.

The Crown Prince of Lucis, Noctis, begins the game on a trip to marry his childhood sweetheart and Oracle, Lunafreya, along with his three friends and guardians, Gladiolus, Ignis, and Prompto. However, when peace talks collapse and the King of Lucis is killed, the four must go on a journey to save Lunafreya and keep the Crystal from falling into the wrong hands.

The Hunky Main Characters of XV

The Many DLC Releases and Royal Edition

The amount of DLC for Final Fantasy XV is staggering. As if the main story wasn’t enough, these additions included more in-depth looks at the main characters and added details that may have been overlooked or left out of the main game. Sadly, not all DLC planned was released, with many being canceled in late 2018.

Episode Gladiolus, Episode Prompto, and Episode Ignis were all released in 2017, with each addition explaining more about Noctis’s friends and allies. 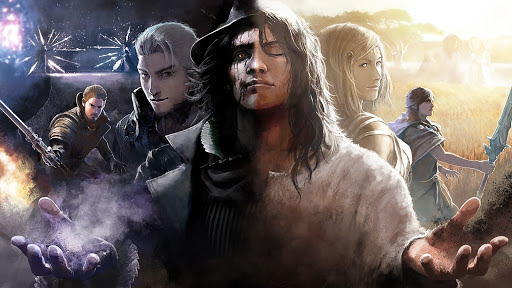 Episode Ardyn, giving players more backstory regarding the game’s main antagonist, was released in March 2019. This was the final DLC released. The Dawn of the Future, another series of story-heavy DLC releases, has been turned into an upcoming novel. That’s way better than nothing!

Play on the Go! Pocket Edition and A New Empire

The characters were made more simple and cutesy, and though it follows the original plot, it is much more linear. Music and voice acting are also largely included, to many fans’ surprise.

While Pocket Edition received largely positive reviews, Final Fantasy XV: A New Empire was largely disliked by critics. Available for Android and iOS, A New Empire is an MMO strategy game that has been called ‘pay to win’ by many players. Despite using the XV name and characters, it has little to do with the original release, attempting to appeal to more casual mobile gamers instead of Final Fantasy fans.

Those who bought the Deluxe or Ultimate Collector’s Edition of Final Fantasy XV also received a Blu-ray of the Final Fantasy XV film. Kingsglaive: Final Fantasy XV, despite being a somewhat mediocre film by many standards, has some of the best computer animation I have ever seen in a movie, and is worth a watch for that alone.

Criticisms for the film come from a weak script with complex political jargon, though the animation is highly praised. The narrative of the movie has been called confusing, though I’d argue that confusion comes with the territory if you’re jumping into anything titled Final Fantasy.

The film moves alongside the events of the game but focuses on Noctis’s father, Regis Lucis Caelum CXIII. The main characters of the film are members of an elite squad of warriors tasked to defend Lucis and the Crystal.

The English voice cast for the movie includes Game of Thrones and Lord of the Rings star Sean Bean as Regis. Lena Headey, known to most fantasy fans as Cersei Lannister, plays Lunafreya.

Where to Play Final Fantasy XV

It may seem overwhelming, but purchasing Final Fantasy XV has never been easier with the release of the Royal Edition. You’re welcome to purchase the base game and DLC content separately if that appeals to you, but if you want everything bundled up, go for the Royal Edition on Playstation 4 and Xbox One.

The Windows edition of Final Fantasy XV was released to overjoyed fans in 2018 and is available on Steam and Origin, as well as on a physical disc. This contains the same bundled mass of bonuses as the Royal Edition on console. (It also includes the ability to mod your game, which is a definite bonus.)

The movie Kingsglaive: Final Fantasy XV is available to rent or buy on Amazon Prime Video, as well as Google Play, Youtube, and iTunes.

The Final Fantasy XV novel titled The Dawn of the Future can be found on Amazon and was released on 14 July 2020.