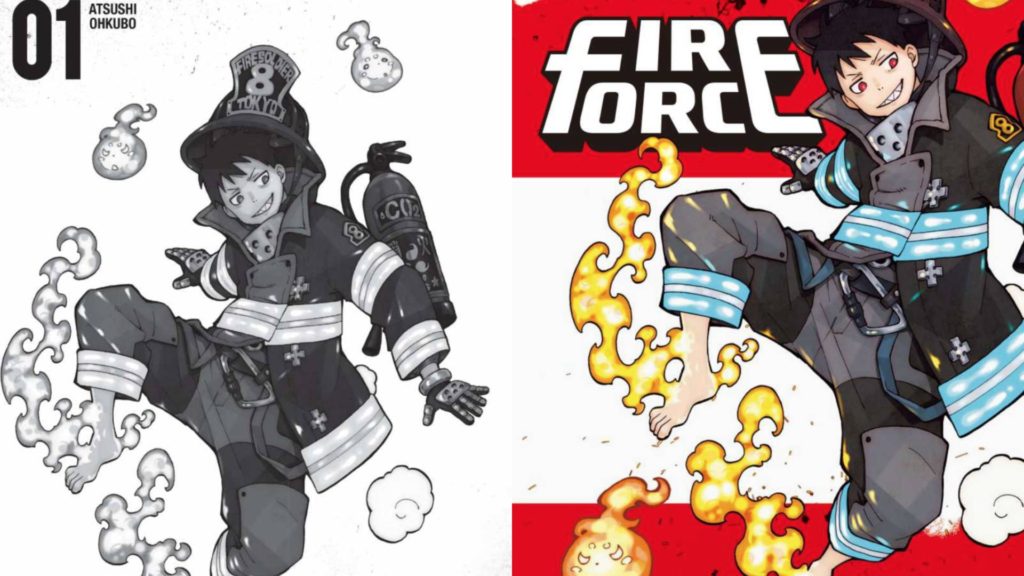 Is it me, or is it getting a bit hot in here? Perhaps it’s something do with the recent announcement of an anime adaptation of Atsushi Ohkubo’s Fire Force manga, which has left me a little more than hot under the collar in anticipation.

Launched in 2015 not long after Ohkubo’s long-running and incredibly popular series Soul Eater came to end, Fire Force takes place in alternate Tokyo which is terrorized by “Infernals” – fire-based destructive beings that threaten the very existence of the human race. To counter this threat, special firefighting squadrons comprised of people with special abilities are formed, and it is into one such squadron that our protagonist, Shinra Kusakabe, enters with the intention of helping people as well as solving the mystery behind his family’s death in a fire some years ago.

Despite the changes that Ohkubo has had to endure as a creator – not only a stark departure in subject matter from Soul Eater but also changing magazine from Monthly Gangan to Weekly Shonen Magazine – these have not had an adverse effect on the series. Rather, it has continued to entertain since it’s inception, both due to the author’s own creativity as well as his decision to slowly open up the story and it’s world over time. It’s also been a solid success for Magazine, in which the series shares pages with such heavy hitters as Hajime no Ippo and The Seven Deadly Sins.

With that in mind, it’s very exciting for me to be able to say that after nearly three years of publication – which is a pretty long time considering Ohkubo’s previous successes – the manga has finally been picked up for an anime adaptation. And helming the project will be none other than the now legendary David Productions, who aside from being almost single-handedly responsible for the recent Jojo’s Bizarre Adventure boom, have also seen considerable success with their recent adaptation of Cells at Work.

Given David Productions’ incredible track record, I have no doubt that the Fire Force adaptation will be a very good adaptation, if not even better than the original manga – after all, there’s plenty of things for the talented staffers at David Productions to work with, from the inventive character designs to the multitude of fire-based abilities that can only benefit from full animation. They’ve also demonstrated in recent times that they’re not afraid to change elements of the original for the sake of a good adaptation – something that far too many studios are far too afraid of doing.

As a result, even though details on the adaptation are very scarce – with no staff or even a release date being shared – I can’t help but be incredibly stoked for what should be an excellent adaptation of a great manga. If you’d like to check out the manga in the meantime, then Kodansha Comics are translating the volumes into English, here.